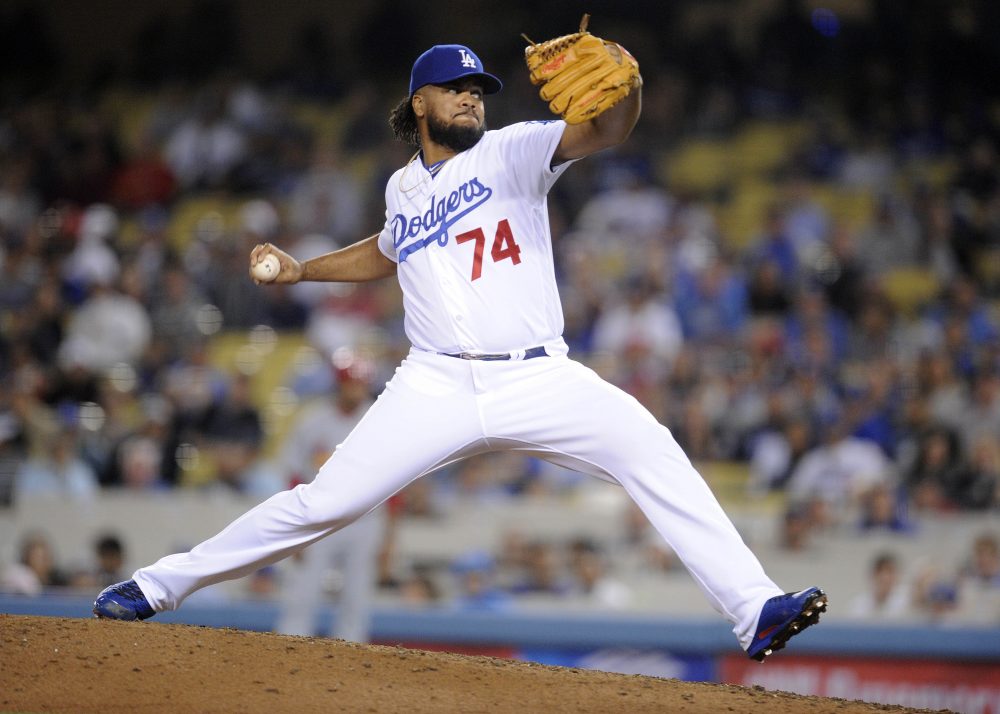 Things have not been going very well for the Dodgers lately, and they remain stuck behind the Diamondbacks in the NL West. Their offense is scuffling. Their bullpen, on whose shoulders many of these recent losses rest, is an unmitigated disaster. Each loss seems more egregious than the last. There was a walk-off three-run homer with two outs in a 2-0 game on Saturday. There was a walk-off bases-loaded walk on Sunday. On Monday, Clayton Kershaw pitched what might have been his most classic Kershaw start of the season—eight innings, one run, no walks, nine strikeouts—only to see the game unravel in the ninth. Every reliever the Dodgers throw out there seems to find a new way to lose their narrowly-held late leads.

None of those relievers have been Kenley Jansen, though. When the Dodgers arrived in Denver on Thursday morning, he felt an irregularity in his heartbeat. Atrial fibrillation. After 15 minutes, he called his trainers; after half an hour, he called 9-1-1. An electric shock applied at the hospital returned his heartbeat to its normal rhythm. For at least another six days, Jansen will not be appearing in his usual high-stakes role, with his usual unflappably cool demeanor, closing out games.

By far the most frequent killer of active MLB players, per Baseball Reference, is the car crash, which has killed 24 active players over the course of the game’s recorded history. The second-most-frequent killer has been the heart attack. The first player known to have died of a “heart illness” was the dazzlingly named Urban Shocker, who spent 13 seasons with the Yankees and the St. Louis Browns from 1916 to 1928, and who was one of the 17 pitchers permitted to throw the spitball after it was outlawed. He died in late 1928. The doctors told newspapers that “strenuous athletics had been too much for him.” Shocker’s wife, meanwhile, claimed that his condition had been aggravated by depression: Shocker had been left off the Yankees’ World Series roster the previous season and was released the following July, a situation that greatly upset him. He was just shy of 38 years old. A year later, Roy Meeker, a player who had pitched only little in the major leagues, died at Reds spring training camp. He was only 28.

Over the nine decades since then, eight other active players have died of heart attacks, all but one of them pitchers. Four of those have been in the past 20 years. There was John Leroy in 2001, only 26 and with just a single major-league pitching appearance, who was about to undergo surgery on his arm when he suffered a heart attack and an aneurysm. In 2002, 12-year veteran Darryl Kile died in a Chicago hotel room at the age of 33, one day before he was supposed to start for the Cardinals. Joe Kennedy, a 28-year-old journeyman starter then with the Blue Jays, died while visiting family for a wedding. And the larger-than-life Jose Lima, past the end of his major-league career, playing in the Dominican winter league, and considering branching out into a career as a bachata musician, died at the age of 37.

Heart disease is the leading cause of death in North America. But we associate it with certain risk factors, with smoking heavily, or with eating poorly, or not getting enough exercise. Vehicle accidents are random; they can affect absolutely anyone, at any time, without warning. But Major League Baseball players, especially in the modern day, are world-class athletes in the prime of life, their bodies conditioned to work far better than most of ours ever could. These are people whose physical skills often seem something beyond human. When you watch a baseball player, you might feel concerned about the strain on their arm, or about the muscles in their legs—baseball injuries. Rarely does one feel any awareness of the fist-sized muscle that drives all of that activity, even as you might feel yours pound as you watch them.

I have vague memories from earlier seasons, but my first truly distinct baseball memories are from 2004. That year I spent some part of almost every day for four months visiting a member of my immediate family hospitalized first for multiple heart attacks, and subsequently for multiple heart surgeries. This was, by then, already a familiar experience to me—the first time someone in my family had been hospitalized for cardiac issues was in 2001. But in 2004, I was finally old enough to fully absorb what was happening. The sudden panic and chaos of the heart attack itself; the yelling and flashing lights and rush of paramedics and sounds of sirens; the even more sudden immersion into a world of grey, grey walls and grey people and grey chairs, silence and static and the smells of attempted preservation.

Everything, from the chaos to the greyness that becomes your life when you or someone you love is ill, was permeated by fear. Every single moment was a moment where disaster might strike, where someone’s heart might stop. I spent a lot of my spare time memorizing first-aid manuals. I spent a lot of time taking my own pulse, checking anxiously to make sure that I was still alive, and would continue to be alive in the immediate future. I also spent a lot of time watching baseball, more than I ever had before. I needed it, maybe, for the first time.

Here is the first memory: a Vancouver Canadians game—we went there directly from the hospital one evening. It was the single live baseball game we got to see that year. The game was long, dreary, poorly played, and error-ridden, and the Canadians lost. What is vivid in my memory, though, is that it was some kind of promotional day, and they had Hawaiian dancers on the field during the seventh-inning stretch for whatever reason. The Hawaiian dancers were so brightly colored, with their leis and their flower crowns and their green skirts, and they danced for such a long time. I felt angry. What a waste of time, I thought, suddenly an 8-year-old curmudgeon. This is a baseball game.

Here is the second memory: the ALCS. The Yankees, my mom’s team, were up 3-2 in the series. Curt Schilling was pitching for the Red Sox. Everyone was talking about it: he had just had surgery, and his ankle was ripping open, and yet he was still there. He kept going and going, even though he looked so old and tired, and even though with every step he seemed to be getting slower. Baseball players had, to that point, been god-like figures to me. But here was a baseball player, like all the other grey people I’d seen that summer, like the person I was afraid I would become, with a body that was clearly breaking down. He won the game anyway; the series was going to Game 7. I could feel my heartbeat in my throat.

This isn’t the first time Kenley Jansen has dealt with heart issues. All the way back in 2011, when he was only 23, and before he was really Kenley Jansen in the way that he is now, was his first complaint of an irregular heartbeat. That, too, was in Denver, after he recorded an efficient seven-pitch save, every one of which made him feel as though he was going to pass out. Jansen said after the fact that he’d actually felt his heart flutter before he took the mound, but had tried to pitch through it. Not only did he try to pitch through it, he tried to convince the one trainer he told about how he was feeling not to tell anyone else. He wanted to play.

After the game, Jansen was taken to hospital. His heart had to be shocked back into regularity, just like it was seven years later. Dodgers manager Don Mattingly noted how little Jansen seemed to be worried about his condition; teammates said he’d called them from the hospital, yelling about how much he wanted to leave. A year later, in 2012, he again experienced a racing heart and shortness of breath. He was treated for it; he declared that he would pitch the next day. Over that offseason, he had a cardiac ablation done. He may need another one.

For all the players who have died of heart issues, and for all those who have been sidelined dealing with them—players as high-profile as David Ortiz in 2006—there are certainly countless others who have experienced them, who have been treated for them without saying as much, and have decided to play through it. That’s what baseball players do—grit their teeth. Stay tough. The heart, after all, is just another muscle.

This time around, though, Jansen didn’t try to pitch through it.

Even though Denver is where the saga of his irregular heartbeat began, and even though Denver is where it has made its latest appearance, Jansen is not going to stop going there.  “You can’t be scared of life, man,” he explained. Especially not when the thing you might be scared of is the fundamental rhythm of your own body. There is a balance to be had between awareness and fear. You have to listen to your body; you have to pay attention when something is wrong. Spend all of your time listening, though, waiting for something bad to happen, and the sound of your heartbeat itself—the repeated assurance that yes, you are still alive—becomes hostile. You become unable to hear anything else. So I understand why Jansen, like many people with heart conditions, was at first so unwilling to acknowledge the seriousness of his situation. Who would want to exchange the baseball diamond, green and bright and thrilling, for the world of grey fear?

The Dodgers have no immediately visible solutions for their ongoing late-innings catastrophe while Jansen is gone, for however long he is gone. Ross Stripling and Kenta Maeda will be able to shore up the bullpen soon, but they can’t negate how sorry the rest of the Dodgers’ relief pitching looks right now. The recently acquired John Axford, too, just hit the disabled list with a broken fibula; Brian Dozier left Monday night’s loss with dizziness, and an electrocardiogram revealed that he, too, was dealing with an irregular heartbeat. He returned to the lineup the next night.

The last thing the Dodgers need right now is a blow to their relief depth; the second-to-last thing they need is a blow to their sputtering offense, which has scored only 29 runs since they scored 21 in nine innings on August 2. Jansen will be re-evaluated by cardiologists on the 20th, at which point they could clear him to play—or prescribe him blood thinners, which would put him out of commission until some time in September. The Dodgers might not have that long to wait; one wonders how much longer they can keep spinning their wheels before the Diamondbacks pull away.

Baseball keeps going, though, always returning after the ugly losses, regular and familiar and comforting even when it’s stressful. And whether next week or three weeks from now, we can expect to watch Kenley Jansen pitch again—the bottom of the ninth in a one-run September game, heart pounding with excitement.