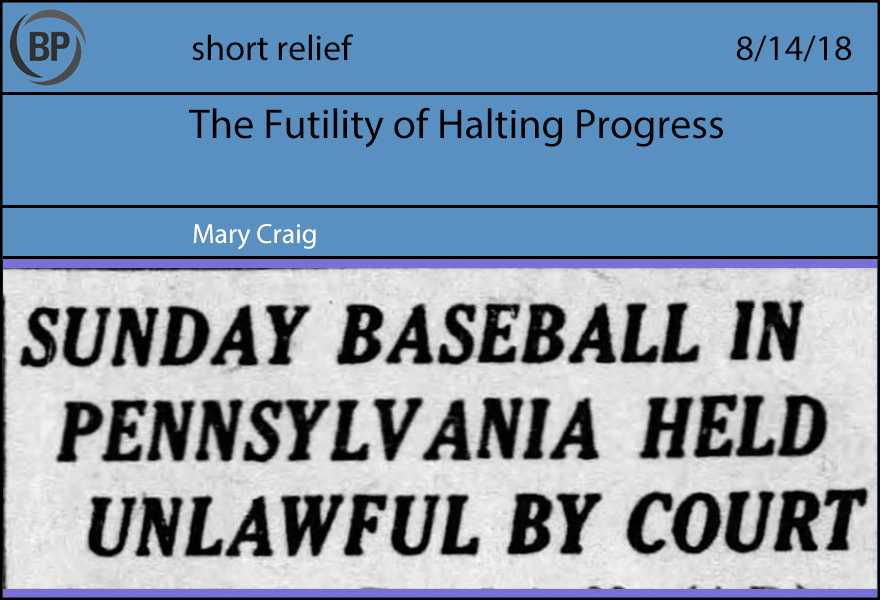 In 1794, the newly formed Commonwealth of Pennsylvania codified a law that had existed in spirit since 1682. As part of a series of similar laws collectively known as the “Blue Laws,” this particular one made illegal the performance of “any worldly employment or business whatsoever on the Lord’s day, commonly called Sunday … or practice [of] any game, hunting, shooting, sport or diversion whatsoever.” This law stood in opposition to the First Amendment of the Constitution, but was upheld by the state Supreme Court in 1848.

Throughout the first several decades of the 20th century, Pennsylvania’s legislature began to legalize various Sunday activities, like selling ice cream and attending picnics. Hoping to build on this momentum, the Philadelphia Athletics in 1926 challenged the Sunday baseball ban, asserting that baseball could not have been part of the law since it did not exist in 1794. Nonetheless, the Supreme Court asserted that professional baseball was, indeed, a form of “worldly employment” and was therefore illegal.

However, the Great Depression cared not for the sanctity of the laws of old, wreaking destruction on Sunday just as every other day. The legislature and Supreme Court, by 1933, were forced to yield to necessity. The state’s people and economy desperately required the relief brought by baseball and football on Sunday afternoons, and a bill was passed legalizing sporting events between 2pm and 6pm on Sundays.

I have spent far more time than is healthy listening to the likes of Joe Simpson and John Smoltz drone on about the inadequacies of today’s game in comparison to the way it was played during their careers. Each time after the rage subsides, I think about Pennsylvania’s legislature and Supreme Court.

Instead of codified laws enacted and upheld by the branches of state government, there are unwritten rules enforced by old, racist gatekeepers. Yet both glorify the past simply because it is the past, and if it was good enough for them and their forefathers, it should be good enough for us. Not only is there no attempt to understand contemporary circumstances, there is every effort to halt them in their tracks, to return baseball to the days when players were white and personality was seen as a defect. The values these announcers–and by extension, their employers–purport to uphold do not fit within a modern context, but rather than re-examining the values, their solution is a total rejection of modern society. Just as baseball on Sunday was wrong, baseball in 2018 is wrong, simply because it is new and different.

If Major League Baseball continues to make figures like Joe Simpson the game’s mouthpiece, it will clash with progress and inclusivity until the casualties become so great that MLB itself will face its death sentence. 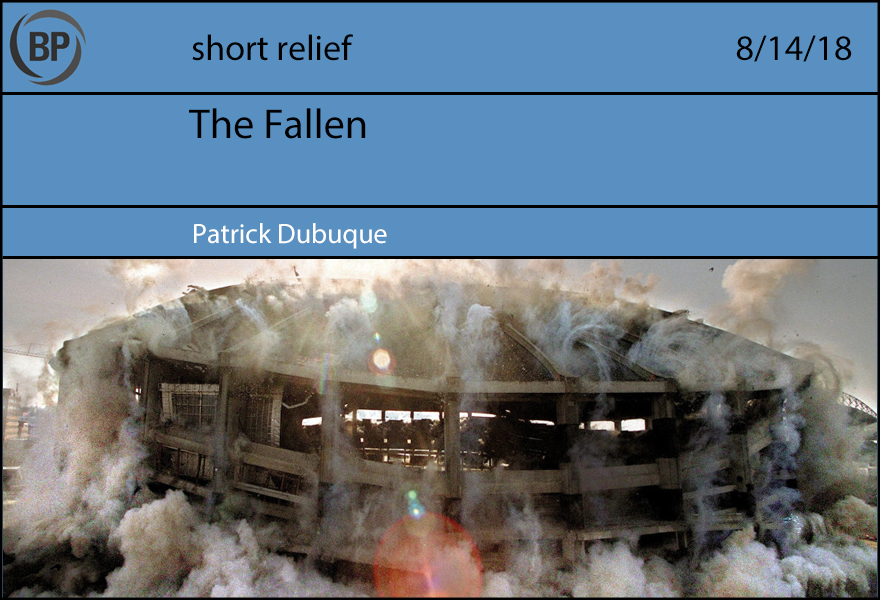 The reports sat in Jim Lefebvre’s office in the bowels of the Kingdome, waiting. A decade later, it would all become ash: the concrete walls, the fluorescent lights, the money and the turf and the hope would all get torn down. But for now it was still 1991, and the Mariners were entering their final game of the season.

Lefebvre’s face was red, as it always was. The expletives were already buzzing inside him, a potential energy of fury. He’d built a career out of harnessing that inner tension, in the school of Durocher and Weaver, led his men not through empathy or manipulation but through pure momentum, pushed everyone forward as if he were falling on them, which he was.

“It’s horseshit,” he said, allowing some small release of steam.

The Mariners would lose that game and end the year 83-79, with a roster that would eventually carry three Hall of Famers, maybe even four. It was a record that would be unimpressive by any standard except the team’s own. By that one, the record was unparalleled: In fourteen years, this would be the first one above .500. Attendance was up. Energy was up. And in twenty-four hours, Jim Lefebvre would be fired.

The management had waged war on him through the press, spread the word that he’d lost the clubhouse (the team won 15 of its final 25). That he couldn’t take them to the next level. That he’d played Dave Valle over Scott Bradley. “If you get fired for those tickytacky things, then you don’t belong in the big leagues,” Lefebvre said. “If they don’t want you—if they want to fire you—they will find some reason to do it.”

When I was in middle school I remember my dad coming home early. He’s a short man, barrel-chested, tightly wound: a Lefebvre type. Swearing was one of his hobbies, and I could feel that same tension then. He’d worked for the same company as long as I could remember, an average job with an average desk. He worked long hours. They had laid him off, which upset him, but not as much as the way they had done it. They made a sham of it, upended his personnel file, invented misdemeanors, expenses on business trips. They found their reasons, all for the sake of the human resources department. No one else would know, or care. The lie required more lies.

Lefebvre wasn’t good at the one essential task of being a manager: agreeing with your boss. He cited the team’s unending cheapness, their laughable corporate culture, their conspicuous tendency to blame everything on the manager. He tried to be diplomatic, sitting in that office, refusing to specifically blame the men above him. Sometimes you can’t stop them from tearing you down.

“And I did my job,” Lefebvre said. “I can leave here knowing in my heart that I did the best job I could possibly do. So I leave with my head high and my chest high.”

I hope my father was able to take the same approach, once his temper died down. Not getting fired by someone like Jeff Smulyan would have been the real mark of shame. 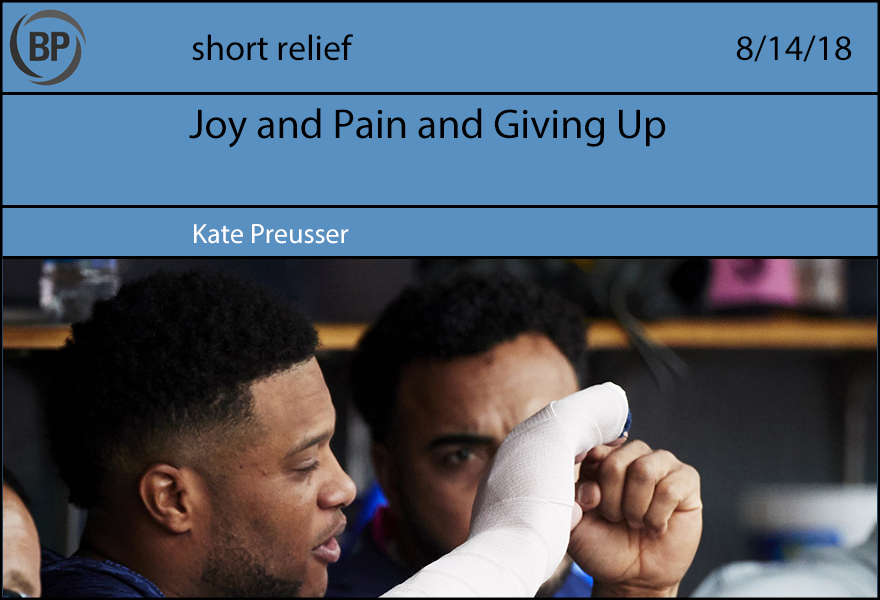 On Friday night, I had one of the very best baseball days I’ve had in [reflects over entire life as a Mariners fan] … a while. The Mariners, already one game up in the series against the Astros, secured at least a series split with another improbable victory against Houston’s Ace-1/Ace-2/Ace-infinity rotation. I attended my first ever Everett AquaSox game and saw short-season-A ball up close and personal. Robinson Canó was making a rehab start and smacked a go-ahead grand slam that seemed predestined even before the pitch was thrown and made a diving stop/backwards flip to begin a double play. Reader, I am not ashamed to say it made me jump up and down. My team and I were part of a fundraising effort that raised more than $2,000 to support the Alzheimer’s Foundation. I spent time with people who get as excited about a sidearming low-A pitcher as I do. I ate a really good burrito.

I’m trying to be conscious of my happiness now that it’s a little thin on the ground. Summer is in full bloom, but happy, carefree evenings like this—nights where it all goes right—are winter-scarce. Enjoy the moment, I command myself, and then get worried that I’m spending too much time outside of the moment, thinking about how much more I need to be enjoying it, hurry up and get back to the moment bozo you’re missing all of it. I read a quote from Warren Buffett the other day about how money doesn’t change people, it just intensifies qualities that are already there: those with a natural tendency toward being a phony balloon into bigger phonies. I wonder if the same principle applies in reverse: if being impoverished in happiness accentuates greed for more happiness. Certainly I felt greedy, trailing in after my friend on the pretense of seeing his new apartment just to keep the night going.

I returned home to the news of something previously unthinkable: a baggage handler at SeaTac had hijacked a commercial aircraft, and, with no pilot’s training, flown it into the skies and into intended oblivion. On flight recordings he describes himself as “just a broken guy.” For an hour, a plane spooled through the sky over a dense metropolitan area, terrifying onlookers and freezing all kinds of traffic in the area. What crept across social media first as a joke, a stunt, soon became evident for what it was: a long, sad, suicide note written with a 175,000 pound piece of machinery.

The tarot card of the Wheel of Fortune pops up in a reading to remind the querent that the only constant in life is change. It’s a reminder that nothing can stay bad forever; it’s a reminder to enjoy the highs while you have them. But when you hang out a little more on the spokes pointed downward, whether by circumstance or chemistry, even happiness can feel dangerous, fragile. To possess it is also to think of its inevitable departure. I think of the low-A pitcher, hanging his head after giving up a grand slam to a perennial All-Star, and how every joy in baseball is shot through with pain for someone else.

Maybe that’s true for people, as well; we pass joy and pain between each other like dishes at a meal, and sometimes you get the orchard-fresh peaches tucked in a buttery, flaky crust, and sometimes you get the expired can of green beans dumped unceremoniously in a cold dish. It’s hard, in the moment, to feel like you won’t be staring at that particular brand of failure forever.

You won’t. Someone, somewhere, is on the other side of the wheel.

You need to be logged in to comment. Login or Subscribe
Todd Treichel
Terrific writing by Kate Preusser here, and a nice vivid portrait of Jim Lefebvre as a bonus.
Reply to Todd