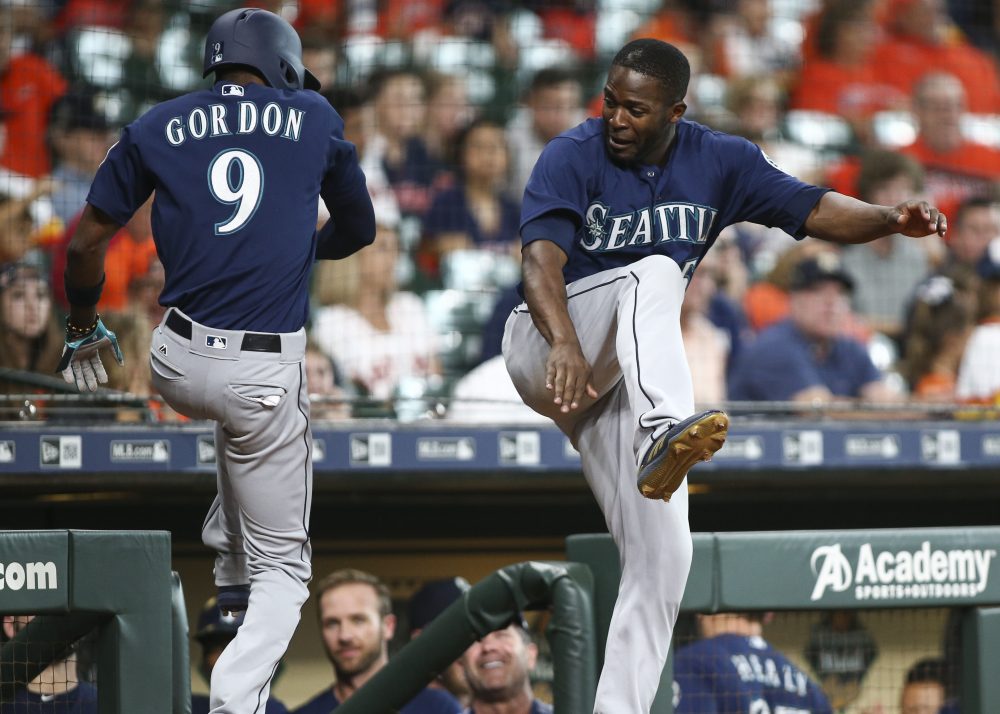 The Mariners swept the Astros in four games at Houston this weekend. This is a big deal because it not only affects the AL Wild Card race but now the AL West division race is also heating up. Only four games separate first place from third place in the division and the two teams battling for the second Wild Card will be facing off this week.

First, the Mariners, who not only swept the Astros at Minute Maid Park but they did it in four games. More incredibly, they were 3-6 in August heading into the series with Houston and they were coming off back-to-back losses against Texas in which they surrendered 22 runs.

All four scores were close—8-6, 5-2, 3-2 and 8-7—and Seattle closer Edwin Diaz picked up a save in every game. He now has 46 on the year and is on pace to finish the season with 63. He wasn’t expected to pitch in Sunday’s contest but when Ryon Healy tied the score with a two-run home run in the top of the ninth, Diaz told his bullpen coach to call the dugout. He wanted to help, and help he did. After Mitch Haniger hit an RBI double in the top of the 10th, Diaz struck out Yuli Gurriel and Max Stassi, gave up a single to Alex Bregman and got Carlos Correa to ground out to end the game and finish off the somewhat improbable four-game sweep.

Second, the A’s beat the Angels two out of three in Anaheim. They lost Friday night, 4-3 but won 7-0 on Saturday and 8-7 on Sunday. With that performance combined with Seattle’s sweep, Oakland now finds itself only 2 ½ games behind Houston for the division lead.

Jed Lowrie collected career hit No. 1,000 in the first inning Sunday, a double to left.

Oakland and Houston meet for three games at Oakland later this week, and three more at Houston at the end of the month. They will not play head-to-head in September. Houston is leading the season series 9-4 so it would behoove Oakland to try and win both series. Seattle and Houston meet for three games at Safeco next week, and for three more in Houston come September. Their season series is currently tied 6-6.

What all of this means is that the race for the American League West crown is far from over and it should be an intriguing one to watch down the stretch.

The Orioles are 49 ½ games out of first place in the AL East. They have 35 wins (so does Kansas City) and 84 losses which works out to a .294 “winning” percentage. They’re the worst team in baseball thanks to Kansas City having “only” 82 losses and, this weekend, they were swept away by the best team in baseball. The red-hot Boston Red Sox are 14-2 against the Orioles with three games to play in the season series.

The most important of the four-game series for the Red Sox happened Sunday when Chris Sale made his return from the DL. Of course, they had nothing to worry about; Sale pitched five innings, struck out 12 and gave up only one hit. He threw 68 pitches (48 for strikes), and he has 219 strikeouts overall, improving his record to 12-4.

Oh—and JD Martinez can’t stop, won’t stop hitting home runs. He now has 37 on the year and hit two in the second game of the doubleheader Saturday.

Giancarlo Stanton seems to be entering one of his yearly home-run-hitting streaks. He’s hit five in his past six games and Sunday, he joined the 30-home run club with a shot to left that put the Yankees up 1-0 in the first inning.

Stanton has been battling a hamstring injury and has been the team’s primary DH during that time. His cure for his ailing hamstring is to touch ‘em all so he doesn’t have to exert much energy on the basepaths. Pretty smart, I think.

The Yankees ended up winning the game 7-2 and took three of four from Texas.

If you haven’t seen this running catch and 321-foot throw by Ramon Laureano of the A’s, where have you been?

He made the running catch on a fly ball by Justin Upton then uncorked a throw that made it to first base on the fly to double up Eric Young, Jr. It was reminiscent of Yoenis Cespedes’ famous throw four years ago—which also happened to take place in Anaheim while he was an A. Weird, huh?

Laureano has made three outfield assists in five games and I think it’s safe to say that this is the throw of the year and every other outfielder in baseball should find it difficult to usurp this play.

The Cubs walked off on the Nationals on Sunday night in a nationally televised game in which Max Scherzer held them to three hits, struck out 11 and didn’t allow a run in seven innings of work.

Rookie David Bote, who pinch-hit in the pitcher’s slot in the lineup—eighth, not ninth— was the hero when he tattooed 2-2 offering from Ryan Madson to dead center, well above the ivy-covered walls to turn a 3-0 deficit into a 4-3 victory.

Bote said afterward that he “anticipated getting a sinking fastball from Madson on the 2-2 count,” and that’s exactly what he got. The youngster flipped his bat as soon as the ball was launched in the air—it was a no-doubter—tossed his helmet as high as he could just past third base, hopped home and mobbed by his teammates who then proceeded to rips his jersey to shreds. Bote also got to meet Bill Murray, who was taking in the game on Sunday. Not a bad day at the office for the 25-year-old who a just year ago was toiling away in Tennessee with the Cubs’ Double-A squad.

The walk-off grand slam was the second for the Cubs this season and it’s the second pinch-hit walk-off grand slam since Daniel Robertson of the Rays did it against Miami on July 22. According to Jesse Rogers of ESPN Chicago the Cubs had accomplished this feat it twice in franchise history before 2018 and the last time it happened was over 50 years ago.

Defensive Play(s) of the Weekend

There were two marvelous plays made on Sunday afternoon and I couldn’t decide on one to choose so I’m posting both. Didi Gregorius did this to Delino DeShields in New York:

Poor DeShields probably assumed he’d have a single because of where he hit the ball but instead found himself out at first.

And Adam Engel did this (again) for the White Sox:

It’s his third home-run robbery in the past seven days. Last Monday, he robbed Greg Bird of a home run and the next night, he robbed Kyle Higashioka. As with Sunday’s catch, the catches didn’t help the White Sox win any games but his performance solidified him as one of the best outfielders defensively this season.

The Mets and Yankees will be playing their makeup game from the rainout July 22 and it should be a good matchup. Jacob deGrom is starting for the visiting Mets and Luis Severino will be pitching for the home team. Both pitchers are having XXX-rated seasons with deGrom leading the league with his 1.77 ERA and Severino looking for his 16th win.

Out west, the Giants are visiting the Dodgers and the matchup is Madison Bumgarner vs. Clayton Kershaw. That should also be a good matchup, no? The Dodgers are currently a game behind Arizona for the AL West lead while the Giants a game below .500 and in fourth place.

You need to be logged in to comment. Login or Subscribe
sandyk
Actually, the Red Sox have a 14-2 record versus the Orioles this season, and still have another three-game series against them in Boston at the end of the month.
Reply to sandyk
David Brown
Grazie, Sandy.
Reply to David