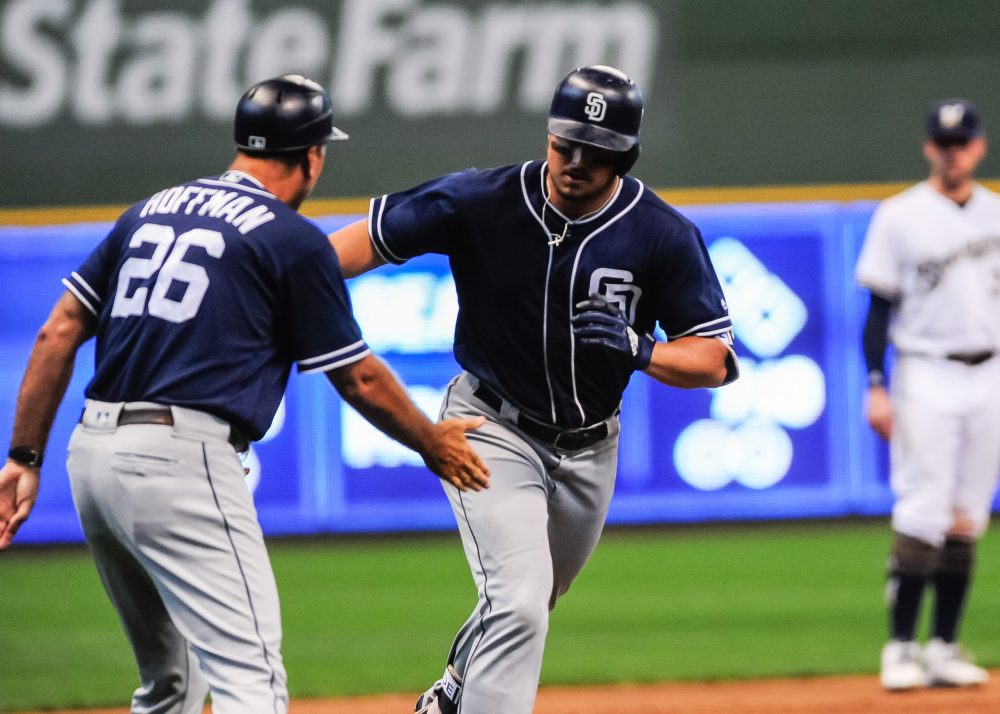 It was all going so well for the Milwaukee Brewers as they went into the ninth inning of their afternoon affair against the San Diego Padres. The Brewers may have dropped the first game of the series against the cellar-dwellers of the NL West but they were leading by two runs heading into the ninth inning, and it sure seemed like they were going to pick up a victory that would bring them closer to the Cubs in what’s shaping up to be a tight race in the NL Central.

Milwaukee gave Corey Knebel the ball so that he could close out the game. If this were 2017, it would be a moment of calm for Brewers fans, since he was in the midst of a breakout season. Unfortunately, things have changed here in 2018 and so the hope was that this ride to victory would be a smooth one instead of a bumpy one.

The ride got turbulent immediately. Knebel walked the bases loaded and proceeded to field a short chopper by throwing it at the rear end of Freddy Galvis as he slid into home plate. The lead was down to one, the bases were still loaded and nobody was out. To say that there was doom on the cards for Knebel and the Brewers would have been an understatement.

Sure enough, the hammer of doom arrived and it came from Hunter Renfroe. The Mississippi State product has gotten off to a great start here in August and, apparently, he enjoys playing at Miller Park, because he was unstoppable during this series. It didn’t matter that the Brewers switched relievers from Knebel to Soria—Renfroe capped off his dominance of the Brewers with a monster grand slam that was a no-doubter as soon as it left his bat.

Just to make sure that the collapse was completed to its fullest extent, Franmil Reyes hit a homer off of Jacob Barnes to turn what was a two-run deficit into an eventual four-run victory for the Padres.

This #Franimal (aka @La_Mole_13) feasts upon fastballs, and enjoys jogging around the bases for exercise 🤓 pic.twitter.com/ZWCrlZDazH

For all we know, this could just be a game that Brewers fans end up laughing about if they get their act together and make a rebound that puts them into the postseason. However, if the race in the NL Central continues to be a close one, they’ll look back at what the Padres did to Corey Knebel and the rest of their bullpen with a lot of regrets and plenty of shame.

The most important thing about any baseball game is the result, and the fact of the matter is that the Blue Jays handed the Red Sox a loss. That type of day is getting rarer and rarer for Boston this season, but the Red Sox still managed to be the focal point despite the loss. That’s because Mookie Betts had himself a monster night. He had five at-bats, reached base in all of them and completed baseball’s first cycle of 2018 in the process.

“I’ll take one of each please.” – Mookie probably pic.twitter.com/ijKumnJn1V

Speaking of the cycle, that’s how the Mariners started off their game as a team against the Astros. Justin Verlander has been undergoing a bit of a renaissance since arriving in Houston, but this is going to be a start that he’d like to forget. For the Mariners, they surely must be hoping that this could spark a renaissance of their own as far as their postseason hopes are concerned.

HR, 3B, 2B, 1B.@Mariners start the game off with a reverse cycle. 👀 pic.twitter.com/tJYcs0dJIW

Now it’s time to enter the dingers phase of Quick Hits, which stars the New York Yankees and Los Angeles Dodgers. We’ll talk about the Yankees to start things off here, as they beat Texas 7-3. All seven of New York’s runs came via five long balls, with the biggest dinger coming off the bat of Giancarlo Stanton. This one had an exit velocity of 121.7 mph, which drove Statcast into a frenzy.

While the Yankees were never really in danger, and were arguably hitting dingers for style points, the Dodgers needed every last one of the five home runs they hit in order to edge past the Rockies. In fact, three of them came in the eighth and ninth innings. The dinger in the eighth inning was a big two-run shot from Cody Bellinger to tie the game at five.

Oh, is that a game-tying homer? #Dodgers pic.twitter.com/NnDkh9CIES

In the ninth inning, Chris Taylor delivered what ended up being the game-winner for Los Angeles. If there’s any fanbase that is feeling the pain that the Brewers felt, it’s Colorado.

Maybe Minnesota fans can join the self-loathing as well, since they also got to witness their team lose a game late. However, it’s understandable if the loss ends up coming at the hands of Cleveland. The Twins will feel especially unlucky after they managed to claw themselves back into the game following a game-tying three-run homer from Jorge Polanco.

One swing of the bat. #MNTwins pic.twitter.com/H8Agt0jgSW

However, all of that work was undone in the bottom of the ninth when Cleveland simply played A-B-C baseball to bring home the game-winning run. A single, a stolen base, a productive out and another single ended up pushing home the winner for a Cleveland team that looks destined for another AL Central title.

For the second time in the four-game series between the Braves and Nationals, the Braves lost their starting pitcher after being struck by a liner. Max Fried was the victim Monday and a few days later, it was Anibal Sanchez who got the treatment. On both occasions, this resulted in the Braves having to go into the furthest reaches of their bullpen and both times saw the Nationals end up having a great day at the plate. Michael Taylor had a good day in particular, as he not only hit a dinger but also delivered some spectacular defense in the outfield as well.

Come for the tater, stay for the diving catch. pic.twitter.com/IWouQoLDxu

It may have been a rough night for the Giants on the whole as they lost 10-5 to the Pirates, but at least Andrew McCutchen could leave the park knowing that he did his level best to keep the Giants in it. He had a couple of plays that were worthy of recognition, with the first being an outfield assist where he nabbed Adam Frazier at second base following a perfect play of a carom.

McCutchen followed it up later with a diving catch that turned what would have been an awkward base hit into a lovely defensive effort.

Play. Maker. @TheCUTCH22 does it again

Ever since getting off to a hot start, and seeming to be sitting comfortably in a Wild Card spot, things have gotten a bit dicey for the Mariners. It’s gotten to the point where the A’s have overtaken them, and this is now becoming a very tenuous point in the season for Seattle — even after winning the first game of the series.

As such, every game is becoming crucial, and they really can’t afford to be dropping series as long as Oakland is going to keep on beating teams. So Seattle’s visit to Houston is going to be a big one. If the Mariners can keep this up and find a way to take the series against the AL West leaders, that could go a long way towards keeping Oakland within arm’s reach. If not, then this weekend could very well be the beginning of a pull-away from the A’s, the continuation of divisional dominance from the Astros and the start of a painful stretch run for the Mariners.