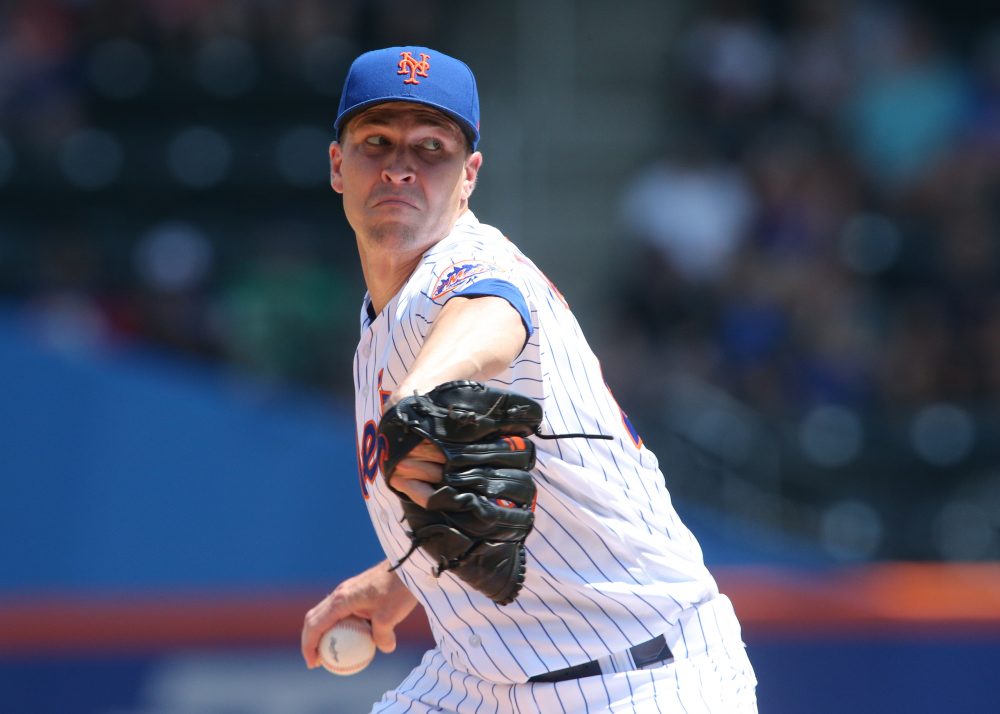 Nobody in baseball history has ever dealt with more rotten luck than Jacob deGrom in 2018. Immediate reaction, that sounds like a spicy take. It’s not. DeGrom entered play with a 1.85 ERA, a WHIP of 0.97, and strikeout and walk rates both significantly better than his already-impressive career averages. Oh, yeah, he also came in with a record of 5-7.

DeGrom’s previous win came June 18 in Colorado. Since then he has gone 0-5 in seven outings, each of which has been a quality start. Every five games deGrom gives the fans something to remember, and every five games the Mets’ offense gives deGrom something he wishes he could forget. There were rumors a couple of weeks ago that deGrom could be traded to a contender, but nothing materialized.

With deGrom on the mound, the Mets hosted the Reds and Robert Stephenson. If there was any temptation for deGrom to pack it in and stop trying after the trade deadline came and went, he sure wasn’t heeding it on this day. DeGrom put up his 13th consecutive quality start, ceding just five baserunners and striking out 10 as he kept the Reds off the board for six innings. Meanwhile, the Mets built up a lead they would stretch to 8-0. Brandon Nimmo and Austin Jackson drove in three runs apiece, but deGrom was the star as he usually is:

In theory, deGrom should be able to count on a win whenever he pitches like this. In reality, he pitches for the Mets, where you can’t count on anything but dysfunction. He’s got a real outside shot at winning the NL Cy Young Award despite his ERA—which has fallen to 1.77 because the first number just wasn’t crazy enough.

Walk-off alert in Cleveland! With Trevor Hildenberger on the mound for the visiting Twins, Francisco Lindor came up in the bottom of the ninth with the score tied and runners at the corners. A single would’ve been good enough to plate the runner on third. Instead, Lindor went yard to end the game. Even more satisfying.

A day after the Padres beat the Brewers in Miller Park, Milwaukee got its revenge. In the first inning, the Brewers made a lot of noise. They put runners at the corners and one out when Jesus Aguilar strode to the plate. Aguilar had been struggling a bit since the All-Star Break, but he crushed a home run here to open up a 3-0 first-inning lead. Travis Shaw followed by putting one out of the park himself. And finally, Eric Thames launched a long ball to complete the five-run inning:

Two weeks ago, while reliving the Rockies-Astros game, I noted a particularly unorthodox play: a sacrifice fly to the third baseman. Weird stuff like that is what I live for, and it is pretty rare. So, naturally, it happened again two weeks later. The Rays loaded the bases with one out in the bottom of the seventh, trailing by one. A pop-up to deep shortstop was not going to get the job done, very probably—and that’s exactly what Carlos Gomez got to work with. Fortunately for him, the throw by Baltimore’s Tim Beckham was truly terrible and Gomez scored the tying run easily:

Coors Field in Colorado is known for its hitter-friendly conditions in the rarefied air. It is rare for pitchers to put up career highlights in Coors. But German Marquez was having none of that. In the top of the fourth he struck out the side on three pitches apiece—an Immaculate Inning:

Immaculate Inning and all, the Rockies fell to the Pirates, 4-3.

Before that 4-3 score went final, the Rockies threatened in the eighth. With runners on the corners and two out, catcher Chris Iannetta smoked a three-hopper to the left of second baseman Adam Frazier. Frazier reacted quickly enough, went full extension, and made the play to end the inning. If he misses it, a run scores and the inning continues.

The Unofficial Thursday Day Game To Clandestinely Stream On a Background Tab At Work is undoubtedly Twins at Indians. Jose Berrios, in the midst of a phenomenal breakout season, going toe to toe with Corey Kluber? Yes, please, I’ll take some more of that. Though this is technically a divisional rival 1-vs-2 matchup, both teams are separated by a full ten people.

That being said, Berrios-Kluber might only be the undercard. The Mariners and Astros will meet in Houston. Opposing one another on the bump are James Paxton and Justin Verlander, another pair of heavyweights. Scoring first could be enough to win in this one.

Ross Stripling for the Dodgers and J.A. Happ of the Yankees will be activated from the disabled list to make their respective starts. Happ gets a taste of home cookin’ and a date with the Rangers, while Stripling draws the unfortunately volatile duty of Coors Field.