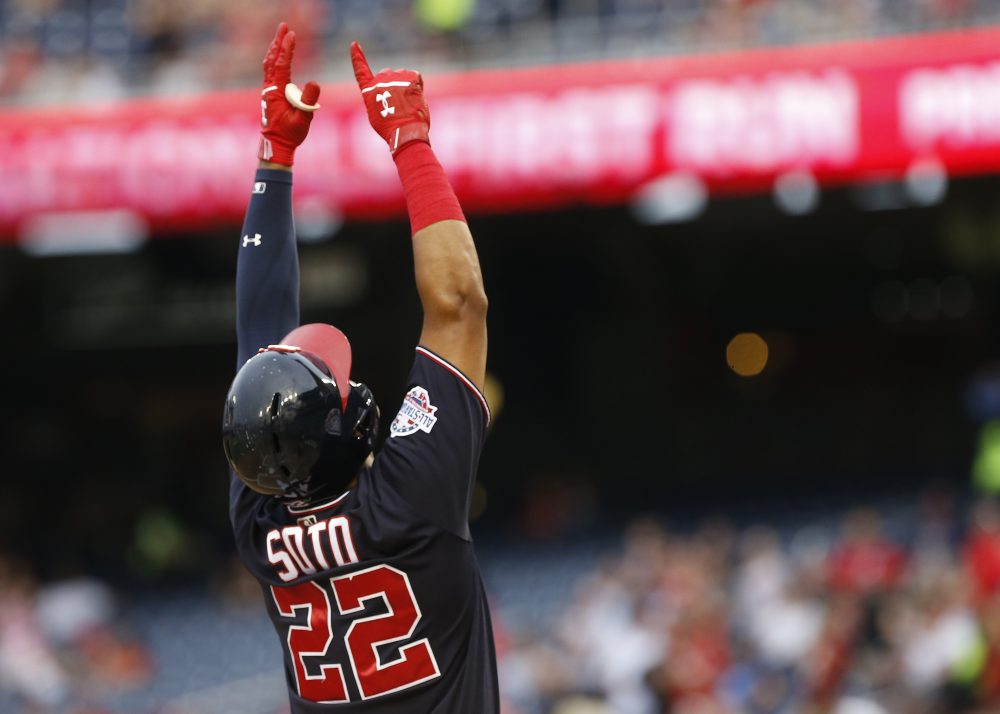 The Tuesday Takeaway
Juan Soto is doing things that are hard to believe.

In a doubleheader at Nationals Park, the 19-year-old went 3 for 6 with a home run and three walks. The homer, his 14th, gave him more home runs as a teenager than all but four players in history. His OPS is .999.

A comment by Atlanta Braves broadcaster Joe Simpson during the telecast — questioning whether the young phenom is really 19 — was unprofessional and wrong on every level.

Age fraud hasn’t been a thing in Latin America in nearly a decade. But then again Joe Simpson is stuck in the past, so it’s not a surprise that he proffers this sort of garbage. Ignore it.

There’s been a lot of frustration this season about broadcasters bemoaning the state of the game today. Whether it’s John Smoltz’s constant longing for “the good ol’ days” or Matt Vasgersian chastising the way some fans might choose to enjoy an outing to the ballpark, the ability of broadcasters to try to make baseball as unenjoyable as possible is unfathomable.

Simpson’s comments go beyond even that. His gripe with the Dodgers’ batting practice attire was one thing, but questioning without the slightest bit of proof the age of one of the brightest young stars in the game, and someone who happens to hail from the Dominican Republic, is irresponsible and incorrect stereotyping, plain and simple. Baseball, whether it be teams or national telecasts, would do well to employ more people who actually seem to enjoy the game and the young players it is littered with today.

As for the actual game on the field, Soto and the Nationals split the doubleheader, winning Game 1 on the strength of homers by Bryce Harper and Ryan Zimmerman. Soto’s homer was their lone tally in Game 2, however, as Ender Inciarte played hero for the Braves.

Soto is 19. Inciarte is 27. The NL East race between those two teams and the Phillies remains interesting as hell.

Quick Hits From Tuesday
Yeah, the young guys are great and all, but baseball has some old dudes who are pretty cool, too.

Adrian Beltre is 39 and still producing. Felix Hernandez is somehow still only 32 but has been around forever. Oh, and the Rangers beat the Mariners 11-4.

It seemed for a minute that the mighty Boston Red Sox were going to falter.

The best and hottest team in baseball — fresh off stomping on the throats of their biggest rival — took a late lead against the fledgling Blue Jays and threw it in the garbage. Then they flexed their muscles.

Mitch Moreland’s three-run blast was joined by a two-run shot by Jackie Bradley Jr. to lead the Red Sox to their fifth straight win and 80th of the season. They still have 48 games left to play.

The Pittsburgh Pirates are longshots to make the playoffs. Their odds of making it entering the day were only 4.3 percent. But they’re giving it the ol’ Harvard try, and you’ve got to respect that.

Jameson Taillon scattered 10 hits in a complete-game effort and was backed by homers by Sterling Marte and Josh Harrison. Pittsburgh is five back in the jumbled NL Wild Card race but with five teams ahead of them.

The Phillies are in first place in the NL East despite having a losing record on the road. Getting six shutout innings from Nick Pivetta against a fellow playoff contender is a good way to start turning that around, but the Diamondbacks helped out as they allowed Cesar Hernandez to just … keep … running.

Remember Jacob Turner? The Tigers took him ninth overall in the 2009 draft. He’s since bounced around, from Miami to Chicago to the other Chicago to Washington, back to Miami, and finally back to Detroit.

Ohtani’s homer was part of a six-run first inning for the Angels off Turner. The Tigers did not come back.

The A’s train and six-game winning streak came to a halt courtesy of the first-place Dodgers, who jumped on Sean Manaea for single runs in the first, second, and third innings and never looked back. The Oakland defense did its best to keep them in the game, however.

What to Watch For Wednesday
The afternoon matinee will feature Jacob deGrom and the great mystery of whether or not the Mets can score enough runs to get him a win. This time it will come against the Reds. Chris Archer makes his second start with the Pirates against Germany Marquez and the Rockies. The Red Sox send Brian Johnson to the mound as they look to continue destroying every opponent in their path against the Blue Jays. And Luis Severino takes the mound for the Yankees as they look to sweep Lucas Giolito and the White Sox.

You need to be logged in to comment. Login or Subscribe
Patrick Cork
I didn't think the Joe Simpson comments were meant to be taken like that. I took it as for a 19 year old he is doing amazing things are we sure he is 19. as in he is playin above his years.
Reply to Patrick