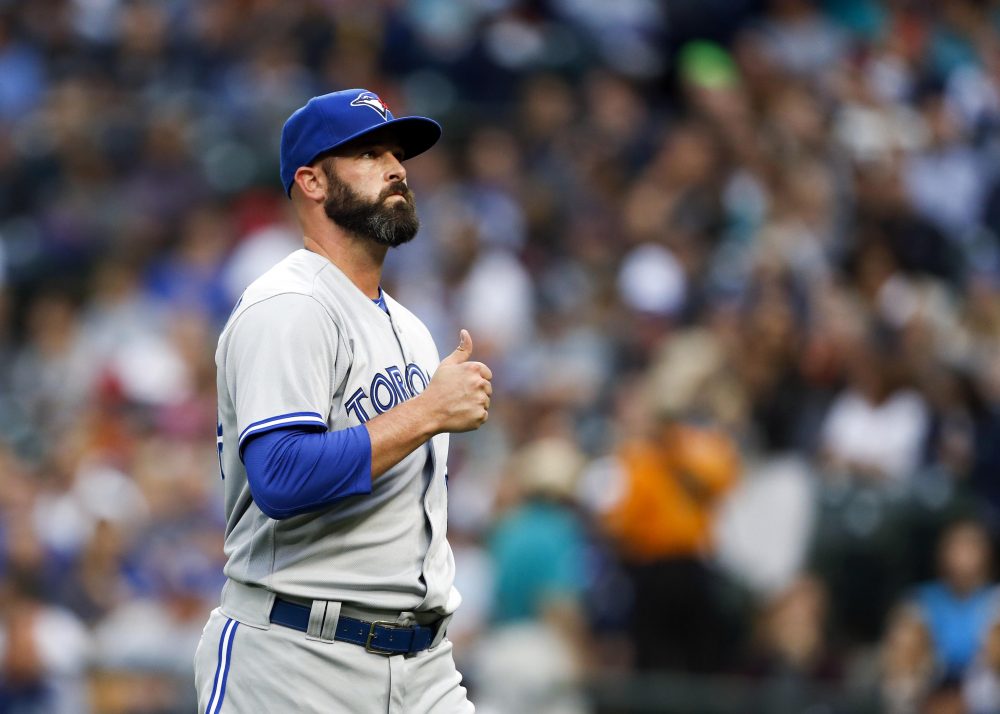 The Blue Jays used 61 players last season; 33 of those players were pitchers, and most of those 33 pitchers were not very good. There are a lot of names on that list you don’t want to see throwing innings for a purported contender. Mat Latos, Nick Tepesch, and Casey Lawrence not only started for the 2017 Blue Jays, but started multiple games. The Blue Jays finished the season 76-86.

They have not fared much better this year. Apart from a misleading April, the 2018 Blue Jays’ pitching has somehow lived up to the disaster of last year. They’ve used 28 pitchers so far this season; they will almost certainly use more. Though a few of their offseason acquisitions performed well out of the bullpen, like Seung Hwan Oh, the Jays’ pitching staff has been among baseball’s worst. Starters expected to perform well—in particular Marcus Stroman—have been bad. The bullpen, overworked during the surprise first month of the season, has also been bad. 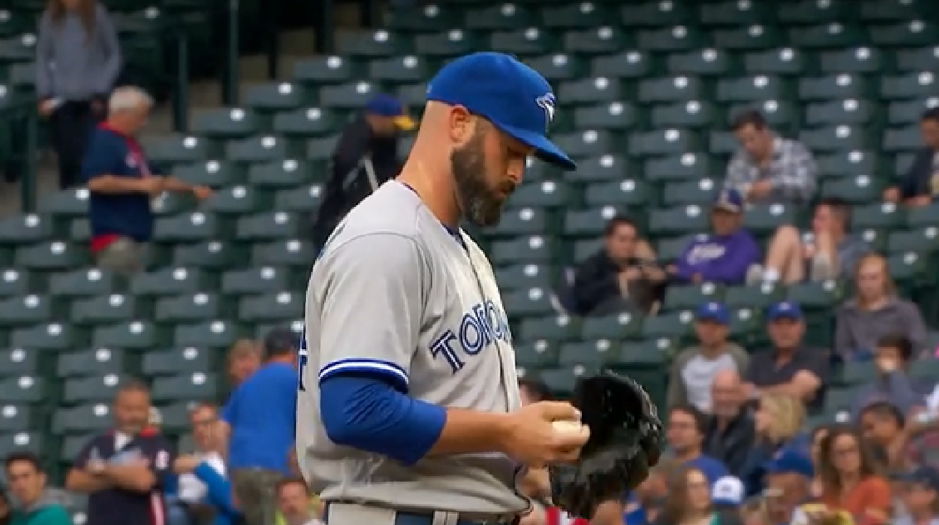 Here is Mike Hauschild, the 28-year-old rookie, getting ready to pitch the bottom of the second inning on August 2, 2018. The Blue Jays were facing the Mariners at Safeco Field in Seattle.

Iam, perhaps to my detriment, quite knowledgeable about this Blue Jays team. I know who most of the “who the hell is that?” guys are. I did not know who Mike Hauschild was. I didn’t recognize his name from reading about any of the Jays’ minor-league affiliates. I wracked my brain trying to unearth a memory of him, or even a mention of him.

There was none to be found in my memory bank—not because I’d forgotten him, but because he’d signed with the Jays literally half an hour before the game started. He was an emergency measure, for an ugly situation just like this one. His name had been hastily written on the lineup card before his signing was even announced publicly. “Who the hell is that?” everyone wondered.

I tried to find a video of Hauschild pitching at some point in his pre-professional baseball career, some grainy high school footage or shaky collegiate interview that I could compare with him now. There was none. The best I can find is a picture of him as a fresh-faced high school junior in Beavercreek, Ohio, doing a corny pose with a baseball next to a parking lot sign: BEWARE OF BASEBALLS GOING FAST—his baseballs, presumably, no matter how unconvincing his teenage expression of intimidation might have been.

Like almost everyone who goes on to pitch in the major leagues, Hauschild was legendarily good in high school. During his senior year, he set a school record for innings pitched in a season, and tied the record for strikeouts. His career with the University of Dayton Flyers was less illustrious. A ground-ball pitcher with a 92 mph fastball and an unassuming strikeout rate to go along with a decent walk rate, Hauschild was, at best, competent. His college performance was uninteresting enough to remain undrafted after his junior year. After his senior year, in 2012, he was drafted by the Astros in the 33rd round.

That draft, you will remember, featured Carlos Correa, Corey Seager, Addison Russell—a whole bunch of exciting prospects and current All-Stars. Hauschild was not an exciting prospect. He was the 999th overall pick, selected immediately after Scott Firth, who last played affiliated baseball in 2015, and immediately before Kaleb Merck, whose baseball career ended after six appearances in 2013. The director of his college baseball program, in search of a quotable superlative, described him as “very durable.” 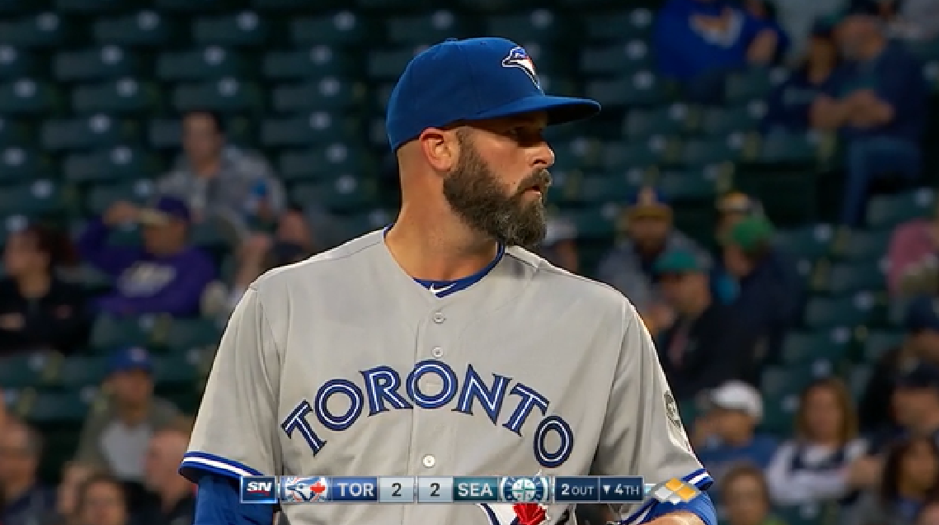 Here is Mike Hauschild getting ready to face Jean Segura in the bottom of the fourth inning, with the game tied at two: a deep inhale, a gritted-teeth exhale, and then the look at the plate. Pitching for a bad team in the middle of August, he was nonetheless pitching in the highest-leverage inning of his major-league career by several orders of magnitude.

Hauschild had hit Ryon Healy with a pitch to lead off the inning, and then allowed a single to Mike Zunino, and you figured this was where the great Mike Hauschild Experiment inevitably fell apart: in his third inning of relief, as he faced the top of the Mariners’ order with two men on and nobody out. The sense of vague awe—that the completely anonymous guy was not only still pitching, but pitching in a manner that was less than disastrous—quickly sank into resignation. This was not actually a miracle in the making. This was something we’d seen before.

Cameron Maybin hit a line drive into Brandon Drury’s glove. Dee Gordon swung and missed at a 3-2 slider that almost hit him. Segura chased one in the same place.

Hauschild pitched three more innings. He allowed only one baserunner.

Baseball wasn’t even Hauschild’s favorite sport—he liked basketball better, because it was “more exciting.” Baseball, at least if you were a position player, afforded too many opportunities for inaction. Too much standing around—“you just kind of have to wait,” he described as the fate of the fielder. That was why he was drawn to pitching: as a pitcher, you always have something to do.

More to the point, though, he just wasn’t great at basketball—but he was great at baseball, better than he was at anything else. So baseball was his game. A professional career wasn’t the first step on an projected path to superstardom for him, but more of a logical progression. Hauschild had enjoyed baseball, and baseball had turned out to be his one extraordinary skill. Continuing to play as a pro was nothing if not a logical next step. Given a talent and the means to pursue it, who wouldn’t try to take it as far as they could?

Still, when Hauschild made the Rangers’ Opening Day roster last season as a Rule 5 pick from the Astros, the hometown newspapers were all over the story—the dream of the local kid, finally coming true against all odds. Hauschild seemed to have a more realistic view of his success. “I definitely couldn’t envision myself in this position when I was drafted,” he said, before adding: “The last couple years I knew it could be a possibility if I kept grinding away.”

His ambitions for his major-league debut were to maybe throw a clean inning, and have fun with it from there. Hauschild made his debut at Globe Life Park on April 8, entering the game in a blowout. He hit the first batter he faced, then gave up a double, then an RBI single. His next three outings weren’t much better. He was designated for assignment on April 20, with an 11.25 ERA in eight innings. He was designated for assignment again by the Astros last week, after a mediocre half-season in Triple-A. When the Jays decided to acquire him, the call didn’t even go through to his agent—it went to him directly.

No one expected anything out of Hauschild before, and I doubt anyone expects anything going forward. One good start doesn’t negate the precedent set by the entire rest of his professional career. But there’s not been a lot to cheer about for the Jays lately—even good things, like the consistent quality of Ryan Borucki ever since he got called up, have ended up overshadowed by other, worse things. Expectation has led almost entirely to disappointment. For these six innings, though, disappointment was suspended. The lack of expectation wasn’t fulfilled by numbness, or by snide, sad I told you so righteousness. There was bemusement, and bewilderment, and a little bit of delight. It turned out to be an okay game, after all, which is about as good as you can hope for. 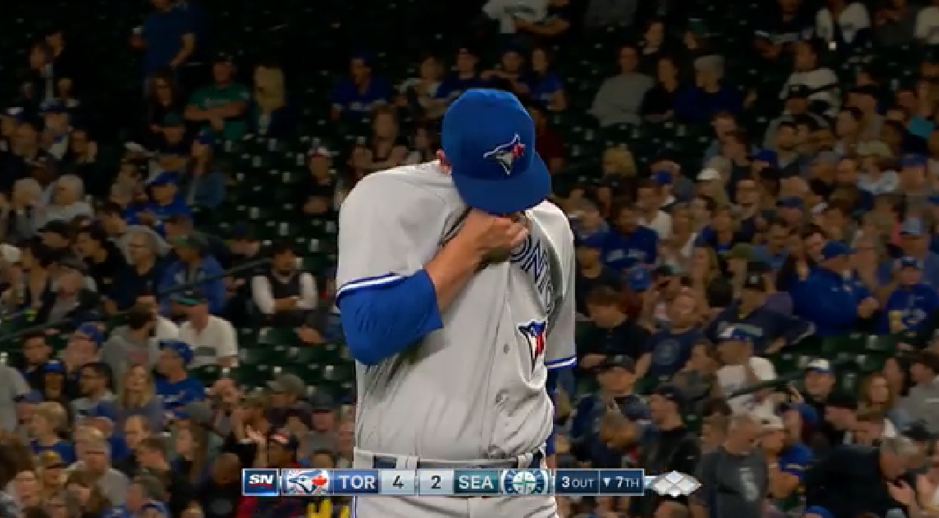 Here is Mike Hauschild walking off the mound to a mild ovation at the Blue Jays-occupied Safeco Field. It was a weak crowd on Thursday night, just over 26,000. But the Jays fans who were there seemed as appreciative as Mariners fans must have been frustrated. Hauschild, who had woken up with no job, and whose acquisition had been such a profound non-event that the Jays’ PR account didn’t even send out a tweet about it, had shut down their offense for six innings. He left the game with the lead, and with a whole new major-league best under his belt. For six innings, he had been almost entirely in control of a contending team. And nobody knew who he was. Now we know.

You need to be logged in to comment. Login or Subscribe
Greg Simons
Terrific article. I wish him nothing but the best, however long it lasts.
Reply to Greg
James Flagg
I actually saw Mike Hauschild pitch several years ago for the Astros Advanced A farm team in Lancaster. Very interesting game, with Astros GM Jeff Luhnow in the stands; the Lancaster starter was former #1 pick Mark Appel, whose career was already starting on a downhill trajectory and on this night was repeatedly squared up by several Inland Empire 66ers who would be out of baseball within the next few seasons. After Appel was removed (and subsequently shipped back to extended spring training), Hauschild came in and pitched well - nothing awesome but efficient. And the final pitcher of the night from Lancaster was a hard-throwing but obscure reliever named Juan Minaya, who has since surfaced in the White Sox bullpen. Who would believe that of the three Lancaster pitchers I saw that night in A ball.....the scrubeenie and the hard throwing developmental guy would make the bigs, and the number one overall guy would not ? It’s that baseball thing, I guess.
Reply to James