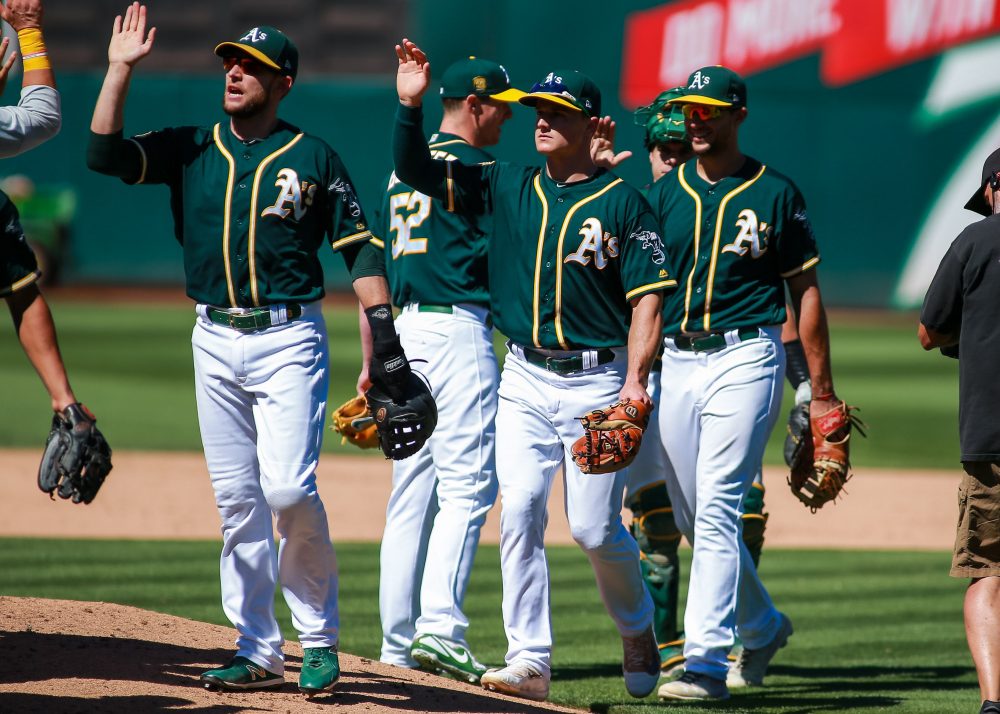 The American League Wild Card race is getting good. Thanks to a four-game sweep at the hands of the Red Sox and a five-game losing streak overall, the Yankees are only 2 ½ games ahead of Oakland for the top Wild Card spot. Oh, yes, the Athletics overtook the Mariners for the second Wild Card and Seattle is currently out of the playoffs. Fun, right?

The A’s also made a move over the weekend that could help their bullpen by trading for reliever Shawn Kelley from the Nationals. Kelley, as you recall, was designated for assignments after a mound tantrum in Nats’ 25-4 win over the Mets last week. He cleared waivers and the A’s sent the Nats international slot money while the A’s also got some money in the deal. Kelley had a 3.34 ERA in 35 outings and was talked up by teammate Blake Treinen, who was with Kelly on the Nationals.

Seattle will be playing the Rangers in Arlington this week while Oakland hosts the Dodgers. If the A’s are the real deal, they’ll have no trouble against the Dodgers who are currently 62-51. The A’s are five games better at 67-46. The 64-48 Mariners will be facing the 49-64 Rangers. On paper, it looks as if the Mariners should have no trouble but you never know.

As for the Yankees, they will have no time to recover from their embarrassing performance in Fenway Park. They’re heading to Chicago to play the White Sox for three games. Lance Lynn will be starting for the Yankees who sit 9 ½ games behind the Red Sox in the AL East standings.

It might only be early August, but as the dog days of summer go on, the race for the AL Wild Card will be heating up.

JOSE RAMIREZ HIT HIS 33RD HOME RUN IN THE FIRST INNING AGAINST THE ANGELS ON SUNDAY. WHEN YOU WATCH THE CLIP YOU’LL KNOW WHY I’M TYPING IN ALL CAPS.

I get it, home runs are exciting, but Tom, my dude, please calm down. Sure, it was a three-run shot and it helped them win the game, eventually, but it was in the first inning and those histrionics are a bit embarrassing. And I’m saying this as a Yankee fan who deals with Michael Kay and John Sterling on a daily basis so if I think you need to simmer down, you need to simmer down.

As for Ramirez, it feels like he’s having a great but quiet year. I don’t know if it’s because Cleveland isn’t as dominant as they were in 2017 or if all of the attention is going to Mookie Betts but I feel like more people should be talking about Jose Ramirez.

A couple teams avoided series sweeps on Sunday. The Rockies and the Dodgers won Sunday, preventing sweeps by their opponents.

The Rockies prevailed thanks to a Nolan Arenado go-ahead home run in the top of the 11th at Miller Park.

The Dodgers won thanks to the heroics of three players, including Brian Dozier, who hit a two-run double to turn a 1-0 deficit into a 2-1 lead.

Cody Bellinger also hit a double that scored Manny Machado to give the Dodgers a 3-1 lead.

By the way, whenever Buehler records a strikeout, the Dodgers’ musical director plays the “chickachickaaaa” sound from Yello’s ”Oh Yeah.” It’s pretty amusing.

On the other end of the spectrum, the Phillies swept the Marlins and the four-game series was capped by an Asdrubal Cabrera two-run shot in the eighth inning. The moonshot broke a 3-3 tie and made up for his bases-loaded pop out in the sixth.

The Phillies lead the Braves by 1 1/2 games in the National League East.

As for the Braves, the story would have been Nick Markakis, who finished with four hits and smacked the big home run, but it was pitcher Julio Teheran who put the Braves on the board. They were down 3-0 in the fifth inning when the Teheran hit his first career home run to the seats in left field.

Teheran hasn’t lost a game in Citi Field in over three years. Here are Markakis’ heroics as well:

He’s a 13-year veteran who is enjoying the best season of his career at the age of 34. And if anyone thought there would be a letdown after his strong first half which earned Markakis his first All-Star game appearance, they were wrong.

How rude of Jake Marisnick to steal a home run away from Chris Taylor.

No offense to the teams playing on Monday but none of the matchups are really standing out. The only one that could be good will be taking place in Arizona. The first place Phillies are visiting the first place Diamondbacks for a three-game series and the first game will see Jake Arrieta starting for the Phillies while Zack Godley takes the hill for the Diamondbacks.

The other game that could be intriguing is the matchup between Houston and San Francisco. The Astros are making their way up the Pacific Coast Highway to face the Giants. Charlie Morton will be starting for the ‘Stros while the Giants are countering with Dereck Rodriguez, son of Pudge. Both pitchers own ERAs under 3.00.

You need to be logged in to comment. Login or Subscribe
Greg Simons
"If the A’s are the real deal, they’ll have no trouble against the Dodgers who are currently 62-51. The A’s are five games better at 67-46."

So a five-game difference in the standings is enough to determine the team with the better record should "have no trouble" with lesser team? That's more hyperbolic than the Jose Ramirez home run call.
Reply to Greg