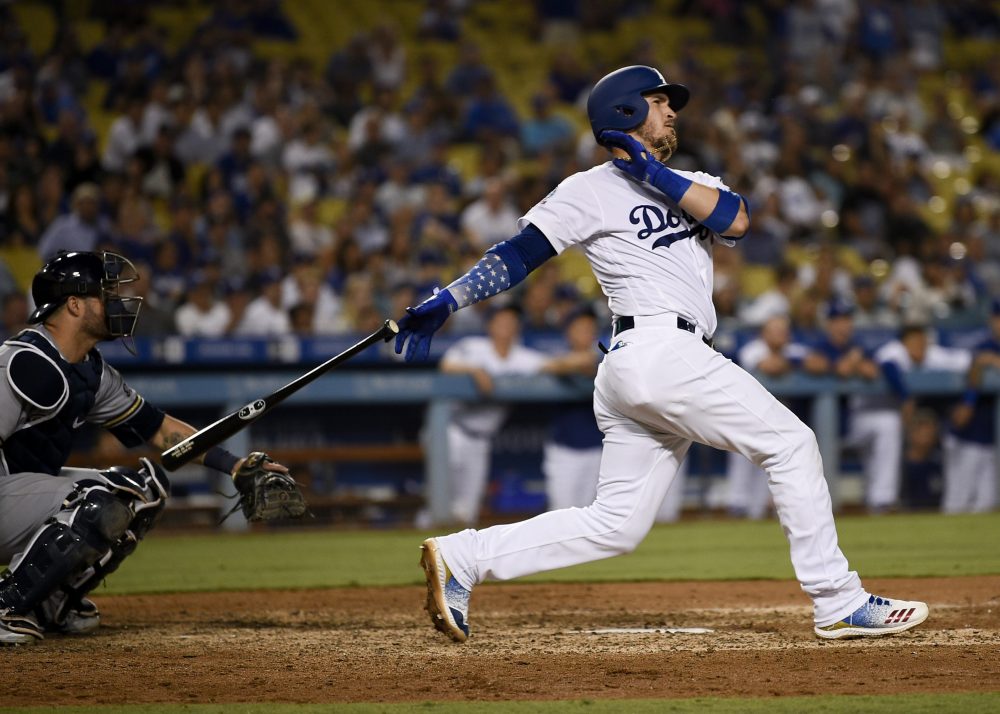 Over the past week, the Milwaukee Brewers and Los Angeles Dodgers have been two of the busiest teams in retooling their rosters for the postseason. Both squads were aggressive in adding positional depth, as well as additional depth arms for their already superb bullpens, and both wheeled and dealed up to the deadline itself. Then, with the deadline for trading passed, the two new-look teams met in Chavez Ravine to preview some playoff-style baseball.

The fans were still filing in as Lorenzo Cain led off the game with a hard shot past second baseman Brian Dozier. The ball split the outfielders and Cain pushed through second, trying for a triple. Dozier’s relay throw was offline, ended up in the seats, and Cain got rewarded for his triple by getting to walk home with the first run of the game unopposed:

Two innings later, Cain made it happen with his wheels yet again. He was on second base with two outs and an 0-1 count to Jesus Aguilar. Los Angeles starter Rich Hill bounced a breaking ball inside—and catcher Yasmani Grandal was able to block the pitch, but not secure it. As Grandal spun around in place behind home plate and Hill frantically pointed over to the dugout where the ball had ricocheted, Cain once again decided to keep on running—tearing around third base and streaking across the plate with his, and the game’s, second run. All before any Dodger player could even touch the ball:

Grandal and Dozier had made the defensive miscues early on that led to two runs for Cain, but they would both redeem themselves in the fifth inning. Grandal led off the frame against Chase Anderson and he tore into the second pitch he saw, ripping a line drive just over the right-field line and into the Dodgers bullpen. Dozier took the very next pitch out of Anderson’s hand and pummeled it to dead center for his first LA home run in just his second at-bat in blue. Two pitches, two swings, and the game was suddenly tied:

In the bottom of the sixth, the Dodgers put two runners on with nobody out—but Matt Kemp lined out, and Grandal bounced into a double play to snuff out the threat. A half-inning later, the Brewers generated a two-baserunner threat of their own, and also saw it wiped out when Christian Yelich grounded into a double play to end the inning.

In the bottom of the inning the Brewers turned things over to rookie Corbin Burnes. For the third straight half-inning, the team batting threatened—two runners on, one out. That brought up Yasiel Puig, fresh off the disabled list earlier this week. The second pitch to Puig was out over the plate and he sat back, then slashed it the opposite way for a single. Dozier came around to score from second, and the tie was broken—3-2 Dodgers:

At this point, the 3D chess match went to another level. Dave Roberts brought in Chase Utley as a pinch-hitter for the pitcher slot—and in response to this, Craig Counsell replaced Burnes with left-hander Dan Jennings. Undeterred, Roberts pinch-hit for his pinch-hitter—removing Utley before he could even see a pitch, and inserting Enrique Hernandez in the batter’s box. Hernandez, known for his hitting prowess against lefties, executed a suicide squeeze perfectly to bring home Chris Taylor and push the game to 4-2.

But the Brewers weren’t going to go quietly. The top of the eighth was the fourth consecutive inning to feature a two-on, one-out situation. New acquisition Mike Moustakas capitalized on the opportunity, driving home a run with a double to center. After an intentional walk to load the bases, catcher Manny Pina tied the game with a run-scoring single:

The drama continued in the next half-inning. After two quick outs Grandal kept the inning alive with a single, and Dozier one-hopped a ground-rule double over the low fence in left field. Instead of possibly scoring the winning run, the Dodgers had that run at third. The Brewers intentionally walked Cody Bellinger to load the bases, and then Moustakas somehow fielded a Chris Taylor smash down the line and threw Taylor out by about two-tenths of a second to keep the game tied.

The game remained tied through the top of the 10th—and then, quick as can be, it was over. Matt Albers came in to pitch the 10th for Milwaukee and Matt Kemp greeted him with a sharp single to left. Next up was Grandal. He had already easily redeemed himself for allowing Cain to score from second in the third inning, but this time he had a chance to win the game. He took the third pitch he saw and ripped another line drive into the seats:

With the win, the Dodgers went up in the NL West by a half-game on the Diamondbacks, and the Brewers dropped a game behind the Cubs with the loss.

Cole Hamels made his Cubs debut at PNC Park against the Pirates. And since the Cubs were the away team, the stage was set for history—well, a neat little piece of trivia, at least—to be made.

Chicago teed off against Nick Kingham in the first inning, hanging four runs on the Pittsburgh rookie and ensuring he wouldn’t return for a second inning of work. Hamels came up to hit in the top of the first, striking out against Kingham, meaning that his first in-game appearance in a Cubs uniform came with a bat in his hands.

Hamels needed 95 pitches to get through five innings, but collected the win and tallied nine strikeouts in his return to the National League.

In baseball—a game in which the hitter can succeed 30 percent of the time and be considered a master of his craft, as well as a game in which the regular season encompasses 162 different matchups—the ability to bounce back from failure and humiliation is an immeasurable, but crucially important, skill.

Jose Reyes pitched the eighth inning for the Mets on Tuesday night in mop-up duty, and after conceding six runs and two home runs he could be forgiven if he chose to take the next day off to regroup. But Reyes was back in the lineup, and his persistence provided him the opportunity to do something which has never, ever been done before in Major League history: hit two home runs in the next game after surrendering two home runs:

There are multiple life lessons to unpack from Reyes’ performance in Washington. You’ll always get a shot at redemption sooner or later, for one. The Mets will always ruin even the most heartwarming moments, for another. Despite Reyes’ vengeful mashing, they lost 5-3. On the bright side, that’s a net 19-run improvement the previous night.

For four years now, Carlos Carrasco has been a model of consistent excellence for the Indians. You could certainly make the case that 2018 has been his best year yet—his RS/9, BB/9, and K/BB numbers are all career-bests. Pitching at Target Field against the division rival Twins, Carrasco was his typical exceptional self: seven-plus scoreless innings, 10 strikeouts, and a lucky 13th win for the 2018 campaign:

I already gave you the background to this one in the Takeaway: bottom of the eighth, tie game, bases loaded, two outs, and the batter smashes a two-hopper down the third-base line. Mike Moustakas was playing deep, thinking he had a play at third or second to bank on. That depth allowed him to barely get to the ball behind the bag, but it also left him with a very, very difficult throw across the diamond and then some to retire Taylor, who is not exactly “plodding.” But the Brewers didn’t bring in Moustakas to make excuses, they brought him in to win a championship—so he did what he had to do and made the impossible play look easy:

Unfortunately, the Brewers weren’t able to pull out the win after Moose’s heroics in both halves of the eighth inning.

– Where are all my East Coast fans who habitually whine about Mike Trout playing baseball too late to enjoy? I’ll admit, Trout finishing most of his games at 2:00 am Eastern or later is a disappointing deterrent to enjoying the best player of this generation—but that means when you do get a chance to watch him, you need to seize the day. Day, as in day game. Today the Angels and Rays are starting with a 1:10 pm first pitch Eastern time. Andrew Heaney will square off with Hunter Wood for the pitching matchup. I’m not telling you to stream this game in a browser tab at work, but I’m not not telling you to do that, either.

– It’s a Yankees-Red Sox weekend starting with a Thursday night game at Fenway. CC Sabathia will pitch for New York, while Brian Johnson is scheduled to go for Boston. The Red Sox lead the division by 5.5 games entering the series.

– Jhoulys Chacin will square off with Clayton Kershaw as the Dodgers and Brewers run it back at Dodger Stadium. Chacin comes in with 10 wins to his name, Kershaw brings a losing record on the season. I’m sure your preseason predictions had it breaking exactly that way.

– We always keep a keen eye out for ace-versus-ace matchups around here, even if one of the aces is still shaking off the rust. In that vein, Chase Field will play host to a heavyweight title fight of veteran arms—Zack Greinke for the home team, Madison Bumgarner for the visiting Giants.

You need to be logged in to comment. Login or Subscribe
Tom Shipley
While I wish it were two, the Brewers are only a game back of the Cubs.
Reply to Tom
David Brown
Thank you for the catch, Tom.
Reply to David