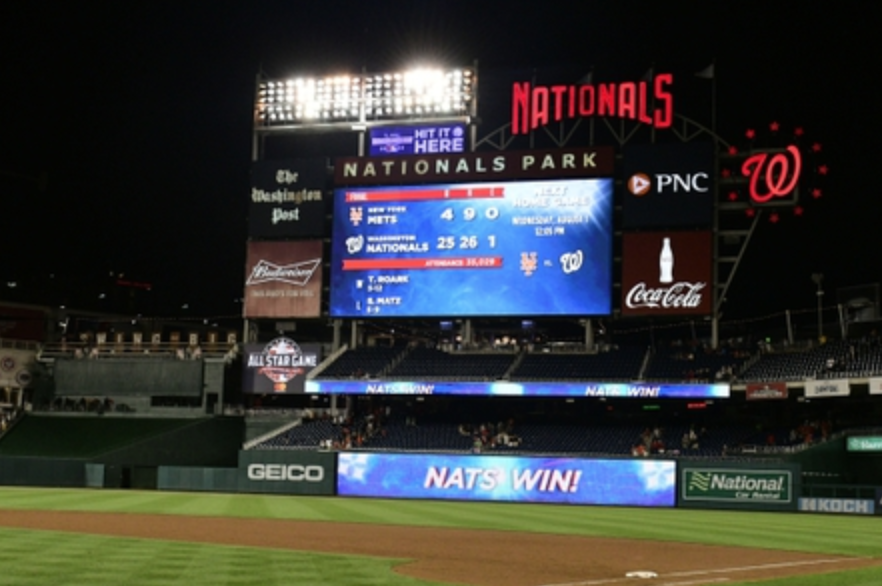 The Tuesday Takeaway
The Washington Nationals didn’t trade Bryce Harper. They didn’t do much before the trade deadline, other than sending reliever Brandon Kintzler to the Chicago Cubs. Everything is totally fine for the underachieving Nats, according to outfielder Adam Eaton, who totally wasn’t taking a shot at his former team or anything when he said:

Eaton on report that Nats clubhouse is “a mess”: “I’ve been on some dysfunctional teams and this ain’t it.”

Said it’s not a mess. “Please publish that.”

Maybe Eaton was right, or maybe the best deadline acquisition Washington could make is acquiring the New York Mets as an opponent, as the Nationals embarrassed the Metropolitans by a final score of 25-4.

Honestly, what more can you say? The Nationals scored in six of the eight innings in which they came to bat. They put up seven in the first, knocking out Mets starter Steven Matz before he could record three outs. Daniel Murphy had two homers and six RBIs in the first two innings. Starting pitcher Tanner Roark hit a three-run double . Five Nats players had at least three hits. Six of the 25 runs were driven in by players who didn’t even start the game. Jose Reyes pitched an inning and allowed six earned runs.

OK, I guess there was quite a bit more to say. You know what? Just watch the dang highlights:

When the Nationals were up 10-0 after two innings (or 13-0 after three innings, or 16-0 after four innings, or 19-0 after five innings) there was plenty of dreaming of this one toppling the famous 30-3 Rangers-Orioles game from 11 years ago.

Alas, it was not to be. But still, thanks, Mets. And never change.

Quick Hits
For a while, it looked like the Rays were going to join the Nationals in the lopsided victory party.

That seven-run fourth inning gave Tampa Bay a 10-1 lead over the Angels, and it sure looked like the Rays were well on their way to a blowout victory, despite employing exactly zero starting pitchers according to the team website’s depth chart.

The Chris Archer-less Rays won but were held scoreless for the duration of the game, hanging on for a 10-6 win despite Mike Trout’s 30th homer of the season.

Archer’s new team followed up the acquisition with a big win against the team they’re chasing in the NL Central standings. The Pirates held off the Cubs for a 5-4 win, with Gregory Polanco providing the decisive blow to back a strong outing from Jameson Taillon.

The trade for Archer was a bold move for the surprising Pirates, just a few months removed from dumping Gerrit Cole and Andrew McCutchen in the loss column. Beating the teams in front of them will be important, of course, and they’re now six games behind the Cubs and just three games out of the second Wild Card spot.

Nothing the Red Sox did ahead of the trade deadline was as big of a deal as the news that they had to place Chris Sale on the 10-day disabled list with left shoulder inflammation.

It’s tough to overstate how important a healthy and effective Sale is to the Red Sox come playoff time, so hopefully, for their sake, this move will have him healthy and ready for the stretch run. But the Sale-less era got off to a rough start as the offense was listless against Jake Arrieta in a 3-1 loss to the Phillies.

The Braves made some nifty moves ahead of the deadline to help supplement their young core for the stretch run. But it was the familiar faces that led the way in an 11-6 win over the Marlins.

Ender Inciarte had four hits, Ronald Acuna Jr. homered, and he and Freddie Freeman had three apiece in the easy win. The race between the Braves, Phillies, and (maybe?) the Nationals promises to be one of the most interesting in the league the last two months.

Matt Carpenter led off the Cardinals’ first inning after the surprising trade of Kolten Wong with a homer off Colorado’s Jon Gray. Typical Carpenter stuff at this point. But after that, it was mostly quiet for the St. Louis offense in a 6-3 loss.

The Rockies had a quieter deadline than they probably should have, but nonetheless remain right in the playoff race despite a minus-1 run differential on the season.

The Dodgers and Brewers combine to employ approximately 27 starter-level infielders after trades that sent Brian Dozier to Los Angeles and Jonathan Schoop to Milwaukee. How the Brewers, in particular, are going to fit Schoop into an infield that includes Travis Shaw, Mike Moustakas, Jesus Aguilar, and Orlando Arcia is yet to be determined. As is if they’re going to be able to outscore everyone as they addressed their offense and bullpen leading up to the deadline but not their starting pitching.

Maybe it won’t matter, as it didn’t with Wade Miley going seven shutout innings in a 1-0 win. The Brewers’ lone run came on a Lorenzo Cain RBI double, but he contributed even more than that to the win.

The AL West race is still very much a thing, particularly after the Astros’ recent five-game losing streak. Charlie Morton helped get them back on track with eight strikeouts over six innings in an important 5-2 win against one of the teams chasing them, the Seattle Mariners.

They may have other things to worry about, though.

Defensive Play of the Day
I don’t know if you’re going to beat Cain’s home-run robbery, but since that’s already been linked above, how about a little Adrian Beltre, who happily stayed with the Texas Rangers through the deadline.

What to Watch For Wednesday
There will be no trades. I mean, probably. But there’s plenty of afternoon baseball, including Noah Syndergaard returning from illness to try to help the Mets allow fewer than 25 runs against the Nationals. A couple of recently-traded pitchers are set to make their first starts with new teams as Cole Hamels takes the mound against the Pirates and Tyler Glasnow takes the mound against the Angels. The Brewers will look to make it three straight against the Dodgers with Chase Anderson facing Rich Hill. And the AL West battle between the Astros and Mariners continues with Dallas Keuchel facing Wade LeBlanc.