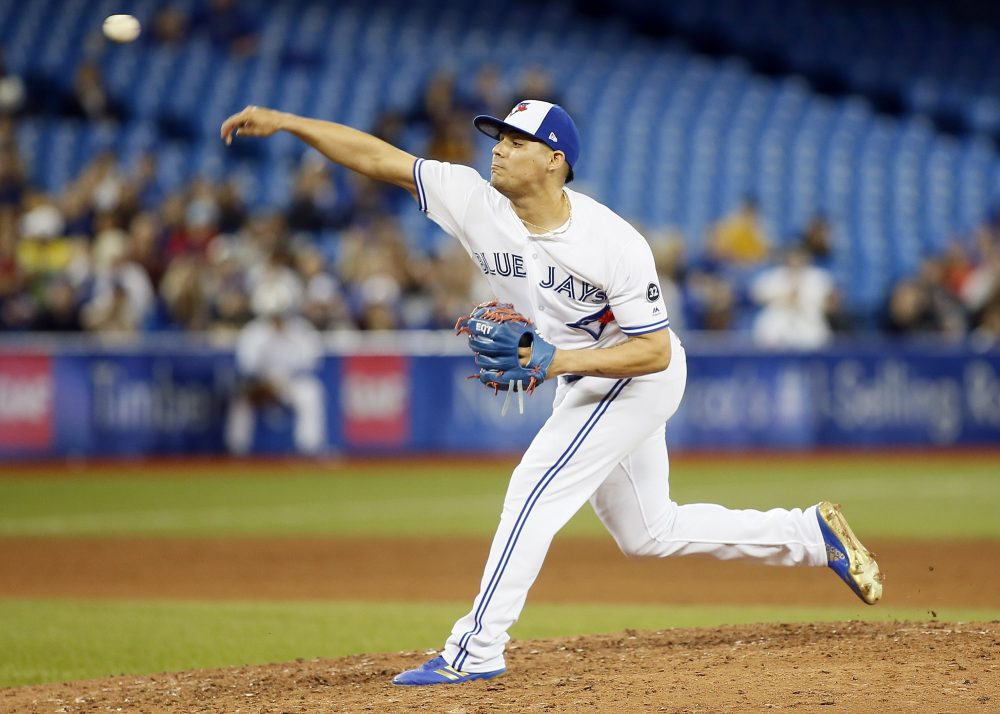 Earlier this week, the Blue Jays traded their closer, Roberto Osuna, to the Astros, getting Ken Giles, Hector Perez, and David Paulino in return. The Astros, en route to another postseason run, got one of the game’s very best and youngest relief pitchers to close out games for them. He has two years of control left on his contract. So does Giles, whom the Jays hope will benefit from a change of scenery and return to the form that has made him one of baseball’s best closers over his five major-league seasons. Toronto also got two prospects out of it. In baseball terms, both teams got what they wanted.

According to the National Coalition Against Domestic Violence, over one in four women and one in nine men in the United States will experience violence from an intimate partner. That’s a lot of people. That’s probably someone you know. Someone in your immediate circle of friends, someone you work with and talk to every day.

This is not an uncommon thing. It is an everyday occurrence. And for every one of those people having violence inflicted upon them by someone they care about, there is someone they care about inflicting the violence. Victims of domestic violence are normal people living normal lives in the world, and so are the people who commit domestic violence. Victims and abusers, abusers and victims—both are statistically likely to be among your friends and colleagues and the people you talk to about sports online. Not in theory, and not as some mental exercise, and not as a point you take in a debate.

This is the reality of the society in which we live. Intimate partner violence, despite being universally despised and denounced in public, takes place with overwhelming, disgusting, mundane frequency behind closed doors. It happens to people of every race, gender, sexual orientation, and socioeconomic status, and it keeps on happening and happening and happening.

Your partner is supposed to be the person who protects you from violence. They are, after all, your partner. You have chosen to enter a relationship, to create a bond of trust and intimacy, and there is nothing more incomprehensible than having the person you love deliberately choose to hurt you. It is so incomprehensible that your handle on reality gets fractured. It becomes hard to trust your own memory, impossible to square the person you know to be a loving, caring person with the one who’s trying to hurt you.

You try your best to convince yourself—and, often, anyone who is concerned—that the violence didn’t really happen the way it happened, or that it was just a one-off thing, or that it wasn’t that bad. That there was no ill-intent, even if you can look at the texts on your phone and see that what you’re trying to tell everyone isn’t true. But you want to defend your partner, to protect them, because that’s what partners do—protect each other. You read articles about abuse, almost by accident, then close the tab as if it had burned you, because naming what happened to you as abuse would cause the breakdown of your reality. You need to survive, and so you survive. You act like everything is normal.

And there is some part of you, cracked open and seeping out from the rupture between what is true and what you need to believe to keep going, that tells you the violence you’ve experienced is simply what you deserve. That this is what happens when you let yourself care. The belief that you are a person whose existence warrants punishment is far easier to process than the belief that the person with whom you have shared the most important moments of your life and the most important parts of yourself is abusing you. So you let that belief fill up the cracks, hardening over weeks and months and years until you’ve been encased. Until you can’t open yourself up to caring even if you want to.

It takes hard work and strength and the reopening of deep wounds to even say the word “abuse” out loud to yourself, let alone to anyone else. It takes even more to open yourself up to caring again. That impossibly difficult path to recovery can come in seemingly stupid, insignificant ways. Like, for example, getting really into a baseball team making a postseason run, and then getting really into baseball writ large, and then writing about it.

Let me be clear: I am not advocating for a lifetime ban from baseball for anyone who is found to have committed domestic violence. That kind of zero-tolerance policy doesn’t prevent violence. It makes victims more afraid to speak up, afraid of taking away the livelihoods on which they and their families are often dependent. We need to talk about this, loudly and clearly and honestly, until even the people who don’t want to listen have to hear us.

This will happen again in baseball, and next time something has to be different. The league can no longer allow for domestic violence suspensions to be leveraged to get deals on players for postseason runs. To watch this unfold even once is too many times. It’s grotesque. If players are barred from the postseason when they serve PED violations, it’s hardly unreasonable to suggest that they be similarly limited if they serve suspensions for actively harming other people.

The Astros’ statement about their “zero-tolerance policy” is unacceptable—they clearly don’t have a zero-tolerance policy, and saying so is an obvious attempt to center the supposed morality of their organization in a decision that was equally obviously driven by a desire to exploit. The Jays’ repeated flip-flops—first saying that they wouldn’t comment on the situation while legal proceedings were ongoing, then saying that they were committed to Osuna as their closer, and now saying that they had intended to trade him pretty much the whole time—are also unacceptable.

All of the discussion—not just from front offices, but from fans—that centers on the recovery of the people being punished for violence instead of the victims of violence themselves is unacceptable. The way we deal with domestic violence cases in baseball, the way we talk about it, needs to reflect the reality of violence. The reality of violence is that its effects are devastating in ways that are inconceivable and constant. One of the most debilitating effects of violence is the way that your own voice is taken away from you.

We cannot continue to contribute to the silencing of victims in our discussions of domestic violence, to perpetuate the culture that allows this horror to be so pervasive. It is so hard to reclaim your agency enough to speak out about violence. If you don’t know what this is like—if you don’t understand why people feel so strongly about this, why they are saying that what is happening is wrong—you need to listen.

I know how much I care about all of this, how much some other people care about all of this, seems ridiculous to many of you. If it makes you that upset, just stop watching. It’s a business. Belying this kind of statement is a belief that if I were to stop caring about baseball—if I were to turn off the TV, throw out my Tulowitzki jersey, and stop spending the very small amount of money I spend on baseball activities every year—I would suddenly inhabit a world where I wouldn’t have to be upset about the way domestic violence is discussed.

That would be true if the way domestic violence and abuse is discussed was a baseball problem. It’s not. It’s a problem everywhere, woven into every structure of our society. For me and so many other people you know, it has tangible effects on our lives every single day. It should not only be our problem to try to solve. It should be everyone’s. And as long as domestic violence remains a problem, there will be no getting rid of us. There will be no getting rid of me.

You need to be logged in to comment. Login or Subscribe
stephenbawesome
Excellent article. Thank you.
Reply to stephenbawesome
James Eneix
Thank you.
Reply to James
Adrock
Thank you.
Reply to Adrock
stephen philbrick
Someone needed to write this for baseball fans, thank you. Someone needs to write this for each and every activity and aspect of our culture.
Reply to stephen
Shaun P.
Rachel, thank you. Keep talking. We all should.
Reply to Shaun
Sharky
I like your idea that domestic violence perpetrators should have a similar ban from postseason play.
Reply to Sharky
Chris Zayner
Thank you for this, Rachel. Please keep talking.
Reply to Chris
tearecrules
Osuna has three years of control left on his contract. He's not a FA until after 2021. He didn't accrue service time while he was suspended.
Reply to tearecrules
David Yeager
Thank you.
Reply to David
Gabriel Kristal
A very powerful and courageous article. I’m glad that BP cose to promote it.
Reply to Gabriel
steve161
Maybe the most important point in this superb article is the loss of the victims' voices, as exemplified by the frequency with which the victims decline to assist in the prosecution of the perpetrator. No doubt baseball can help to deal with this problem, but baseball is a little corner of a society that itself isn't doing enough. Passing the buck to baseball is society's admission of failure.
Reply to steve161
Steven Fukushima
Thank you for writing this. Too often baseball fans and writers avoid these topics. Baseball has the ability to be a positive influence on society (see racial integration) or to continue to put greed and self interest ahead of what’s right.
Reply to Steven
James Applegate
I have been a perpetrator of violence against one of my former partners. I had to stop making excuses for myself and allowing others to make excuses for my behavior, as well. Once I took responsibility for my own actions and stopped looking elsewhere, I found that I could examine my own actions, attitudes and beliefs and begin to make a change. I also found that, by working with other perpetrators of domestic violence, I could continue growing as a person and finding a new way to live my life without exerting control over others. I can't stress enough that openness about these sensitive subjects and personal accountability are the keys to making lasting changes in the lives of both abusers and victims. Please, please find the time to volunteer at shelters and organizations that help the victims and groups that hold the perpetrators accountable.
Reply to James
Nicholas
Thank you, thought provoking article
Reply to Nicholas