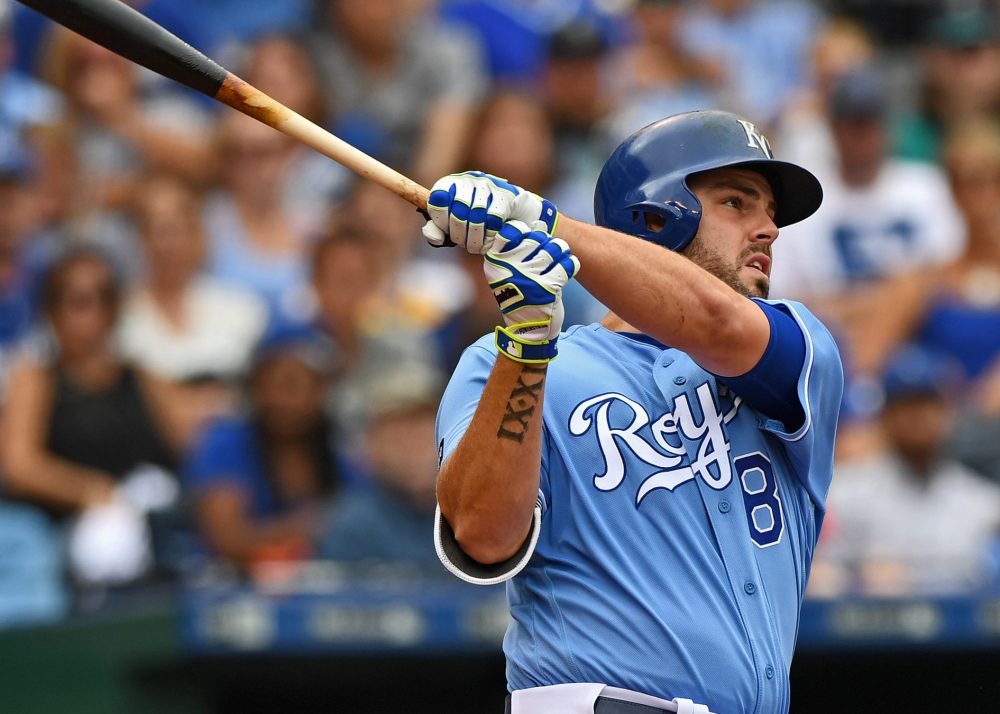 The Brewers are bold. It’s becoming their signature, their brand, their identity. In a winter that saw other teams move mostly slowly and reluctantly, the Brewers pulled that memorable double-whammy, signing Lorenzo Cain and trading for Christian Yelich on the same evening. They’ve tried Ryan Braun at first base, Eric Thames in the outfield, Jesus Aguilar at third base (for a minute there), and enough fringy low-wattage shortstop acquisitions to run a couple heats of the sausage race. Josh Hader’s usage has trended back toward a traditional role recently, but Craig Counsell has done a laudable job of coaxing a patchwork pitching staff into delivering a lot of key outs.

Even so, this move qualifies as a new frontier. Acquiring Mike Moustakas means shifting Travis Shaw (who stands 6-foot-4 and weighs 230 pounds in the media guide, but who really weighs a couple media guides more than that) to second base, where’s he’s never played a professional inning. The resulting batting order is imposing:

Most of the at-bats Moustakas takes will come out of the pool from which Brad Miller, Tyler Saladino, and Hernan Perez currently drink. On certain days, he’ll be slotted in alongside Braun, with either Thames or Shaw on the bench. (Presumably, there will also be some days on which Moustakas himself sits against a tough lefty.) Milwaukee might also be able to call up Domingo Santana for some portion of the stretch drive, at which point they would have at least eight players who represent either a significant power threat or a tough at-bat for an opposing pitcher, with four of them coming from the left side.

Defensively, however, this is a pretty sketchy alignment. Shaw is one of baseball’s top 10 third basemen; Moustakas is no better than average there. Arcia’s return from Triple-A Colorado Springs is notable, because he’s a much better defensive shortstop than anyone (Saladino, Perez, Miller, Nick Franklin, Eric Sogard, Jonathan Villar) the team has tried during his two stints in the minors. He can’t cover the entire infield, however, and he’s now surrounded by some huge men who don’t figure to turn ground balls into outs very often.

Positioning might help Moustakas become a better third baseman. The Royals have been the second-most-aggressive team this season when it comes to deploying shifts, and that’s been a boon to Moustakas in and of itself. The Brewers shift less often, but they’re still above average, and maybe they intend to use more frequent shifts to offset some of the defensive losses this gambit will bring.

There’s something else, too. Consider this heat map of the Royals’ defensive positioning this season: 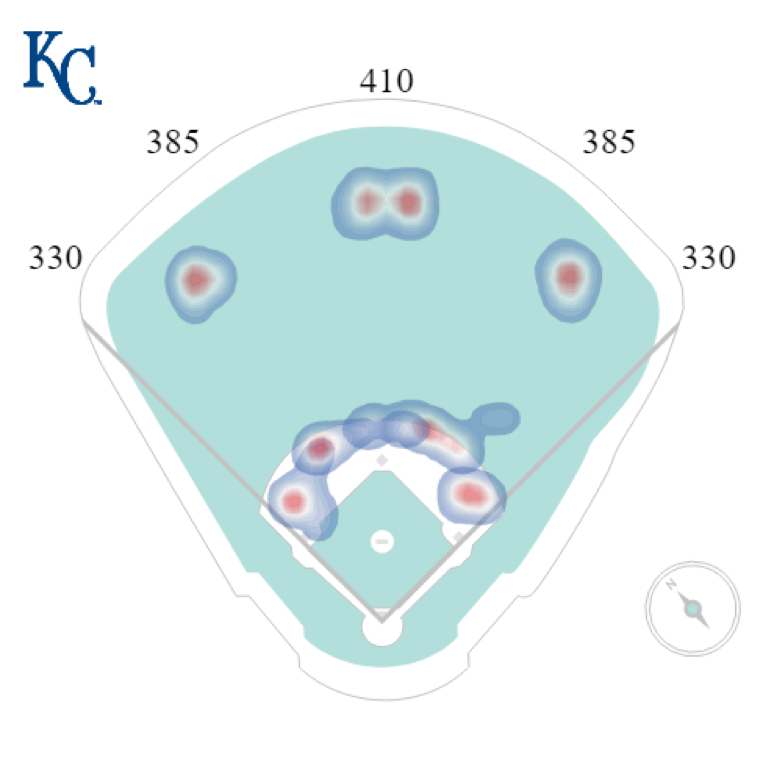 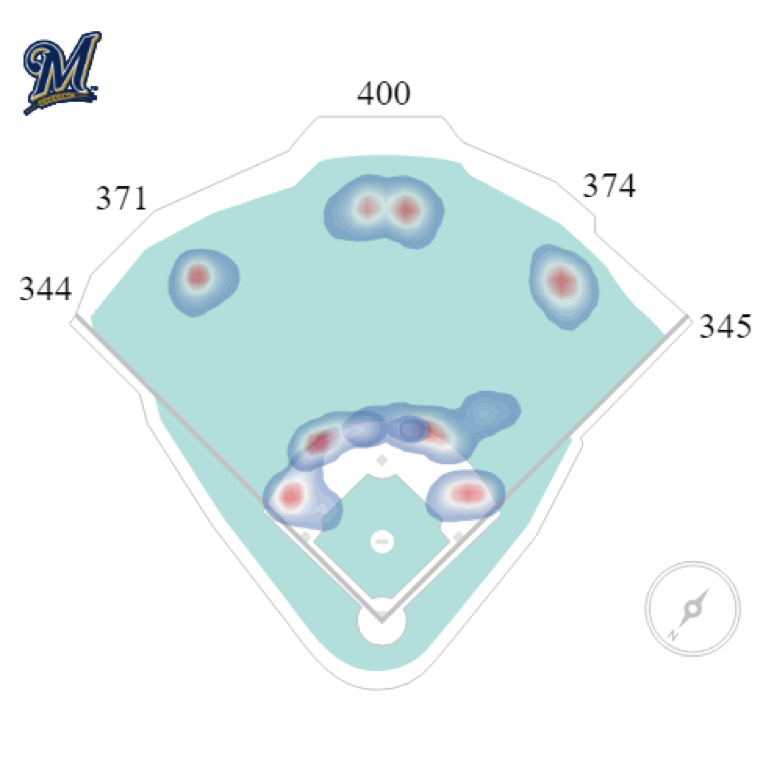 Milwaukee plays its infielders much deeper. Indeed, Shaw has the deepest average starting position among all third basemen. The Brewers also position their shortstop closer to the hole than do the Royals.

This could mean any of a number of things, or even many things at once. Firstly, because Moustakas has been one of the more shallow third basemen in each season for which we have data, it might mean that he’s simply more comfortable at that depth, which could spell trouble. If he struggles to adjust to the Brewers’ defensive plan, or if Milwaukee tries and fails to adjust their plan to suit him, the left side of the infield could become porous in a hurry.

On the other hand, it could mean that Moustakas has been positioning himself that way simply because it’s how the Royals do things. In Kauffman Stadium, ground balls and low line drives that go through the middle of the infield or toward the alleys are more likely to yield an extra base, whereas at Miller Park those extra bases can be gotten if a ball trickles down into the deep outfield corners. If Moustakas is willing and able to change his positioning and preparation, it might make him a better defender than he was in Kansas City—better able to use his strong arm and long limbs, less compromised by his relatively slow first step and lack of agility.

Of course, the big question here is whether Shaw can be anything shy of a disaster at second base, and this positioning data offers the one truly optimistic point in that regard. If I’m going to move a player from third base to second base, and I can’t control the overall athleticism of the player in question, the first thing I’m going to look for is someone who plays the position with Shaw’s style. Playing deep means playing a little more upright, being more comfortable ranging several steps to field the ball, and getting throws off quickly once one fields the ball. That’s not only an abstraction, either: Shaw actually does those things well. Those skills should translate well to second base.

That doesn’t mean that Shaw will have the raw quickness to reach an adequate number of balls for a second baseman. It also doesn’t mean he’ll be able to turn the double play the way a big-league second baseman must. This is a bold move by the Brewers, and it’s going to cost them some runs in the field. Their triple wager is that the defensive losses will be less than you’d think; that the offensive upgrade from their cadre of forgettable keystoners to Moustakas will be bigger than the much less disruptive (and lower-cost) upgrade to, say, Brian Dozier would have been; and that the Cubs are vulnerable in the race for the NL Central, or at least more vulnerable than they’re likely to be at any time in the next few seasons. If they’re right about all three, David Stearns should receive some kind of medal. If they’re wrong about even one of them, this gamble might look foolish in a hurry.

When the Brewers lost Brent Suter for the season, they were left with one of the weakest rotations among contenders. Wade Miley is now a fixture in the rotation, and there are signs that the league is figuring out Freddy Peralta. The team might get Jimmy Nelson back sometime before the very end of the season, but at this point they can ill afford to count on that.

What they can afford to count on, however, is their bullpen. Craig Counsell is one of the most aggressive bullpen managers in baseball, and he might just be the best. He’s overseen Josh Hader’s development into a relief ace, and he coaxed the team through several weeks without closer Corey Knebel. The team needed one more arm, though. Since Knebel’s return from injury, he hasn’t been his former self, and the bullpen’s recent workload risks burning out the trio of Hader, Jeremy Jeffress, and Jacob Barnes.

Joakim Soria adds enough late-inning depth to solidify the situation. Since he lowered his arm slot (and especially started getting out around his slider, turning it into the game’s biggest sweeper) on May 24, Soria not only has an ERA south of 1.00 (and a spotless 12-for-12 record of stranding inherited runners), but a DRA of 1.68. Since May 24, 266 pitchers have thrown at least 20 innings, and Soria’s DRA ranks eighth among them. Jeffress is sixth on that leaderboard. Hader is 14th. Sort it by cFIP (which is slightly more predictive of future performance), and all three are still in the top 20. Knebel is now no higher than fifth on the true depth chart of this bullpen. No kidding: I think the Brewers now have the relief corps everyone thinks the Yankees have.

You need to be logged in to comment. Login or Subscribe
Daniel Driesen
I guess Hiura is less likely to come up before rosters expand with this move?
Reply to Daniel
Matthew Trueblood
I think Keston Hiura will debut sometime between Tax Day and Independence Day 2019.
Reply to Matthew