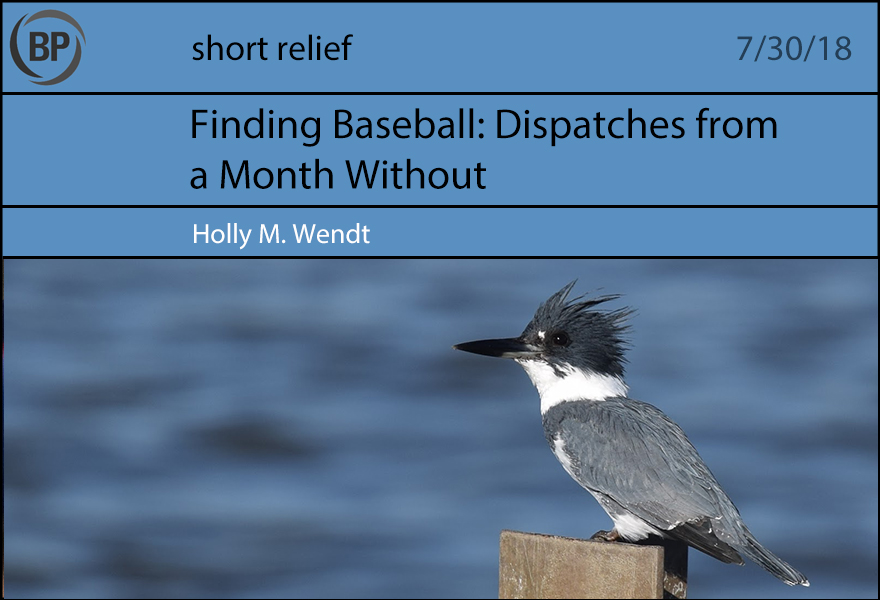 The crows complaining from the maple tree outside the window sound enough like that one row of fans in Philadelphia in 2006, Mike Lieberthal at the plate in the second game of the September 3 double-header against Atlanta, the one that isn’t the one where Ryan Howard hit three home runs. Lieberthal stands in for what will be his only plate appearance of the day, nearing the end of a season in which he plays just 67 games, the penultimate season of his career.

“Ah!” one of the murder jeers as Lieberthal takes a warm-up cut. “My back, my back!”

Lieberthal sends the ball skimming safely through the infield, one of just five Phillies hits in the nightcap. It’s morning where I am. Something falls from the tree—a twig, a knot of maple keys—and in my memory, two of the men stand up, clap loudly.

They fish from rocks and branches and posts overlooking the water, heads craned down, and when they spy their prey—minnows, crayfish—they plunge, headlong, into the water. For an instant, bird and its object disappear, only to emerge, ungainly, flapping to a sturdy perch, triumphant. The flecks of water shed from its wings turn as white as popcorn in sunlight.

The belted kingfisher, were it a creature with hands and bigger than the baseball itself, would make an excellent third baseman.

From the row of Adirondack chairs, this is what’s visible: the river’s liquid fence, the gallery’s trim infield, the bridge’s concrete gray like stadiums I’ve known. Red paint flakes from the wood and sticks to the back of the thigh with midsummer humidity; ants patrol the fine-grained earth the same way they do the crabgrassed outfields of a thousand sandlot parks. Behind a shed, something cracks, a solid, wooden sound—maybe one of the sculptors making adjustments, maybe someone local, readying for fall. Sometimes a logging truck rolls by. At a distance, it might sound like applause. 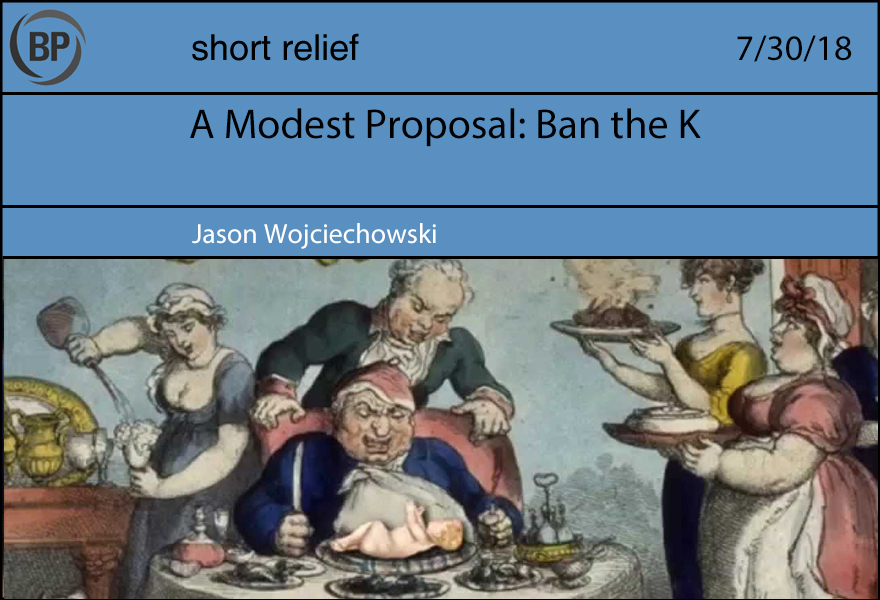 We’ve been attacking this thing all wrong. The three true outcomes are up up up, and balls in play are down down down. There’s no defense in the game anymore, no solid, line-drive singles. There are only booming dongers and enough whiffs to fuel the Coachella Valley for the next three decades. “Let’s ban the shift,” say the galaxy-brain honchos at MLB. “That’ll get BABIP back up, get the game back to its roots.”

No it won’t. Is that going to stop teams from building pitchers with 92 mph sliders and 100 mph sinkers in their secret underground labs? It will not. No, what’s needed is a direct, head-on attack against the problem: We need to ban strikeouts.

Or, more specifically, we need to ban the strikeout swinging. Obviously, a flat ban on strikeouts would mean the leadoff hitter just stands at the plate without swinging until a walk happens, or until the opposition runs out of pitchers. The Eddie Gaedel approach, you might say.

So, no, what we’ll do is treat a whiff the same as a foul ball. Whiffs with zero or one strike are a strike. Whiffs with two strikes are … just whiffs. The pitcher can still sneak a pitch past the batter on the edge of the zone for a strikeout looking, but if you’re the hitter, you offer at anything close with two strikes, just as you’ve always been taught, because there’s no downside. You might as well take a mighty hack, because what are the consequences? Upside for the fans: even more big bops than we get now because theres no reason to cut down on your swing for the sake of avoiding a strikeout. And who doesn’t like dingers? The people complaining about the three true outcomes aren’t moaning about homers, not really. It’s the through-the-roof whiffage that is the affront to morality and aesthetics. So just make the whiffs less bad.

“What about intentionally whiffing to keep the pitcher throwing pitches?” you say. Yes, of course I have thought of that, you clod. I have thought of everything. All you do is empower the umpire to judge whether a swing is legitimate or not. A gamesmanship swing results in not only the batter being called out, but the next batter as well, even if the next batter is not until the next inning, or the next game, or the next season. This still creates an edge case for an elimination game because you will absolutely trade the leadoff out next season to extend the current season. But the answer to that is that the umpire still has the power to end your current season if they think you’re not making genuine efforts to hit the ball. Only the tricksiest of ballplayers will be able to put one over on a bunch of umpires trained in the fine art of sniffing out fake swings.

“But umpires don’t know how to judge that! It’s subjective!” No, it’s not subjective. It’s variable, sure, but in the end, the player either did or did not try to hit the ball. The proof is imperfect, but we don’t let that stop our justice system, do we? We do not. Besides, we watch NBA and NFL and soccer referees make all sorts of borderline calls all year, and in the moment we hate them, but in the long run, not only does it even out, we generally forget the officials. We remember the plays and the players. Such will be the result in MLB.

There is no downside. Ban the swinging strikeout. Ban it now, and all will be well. 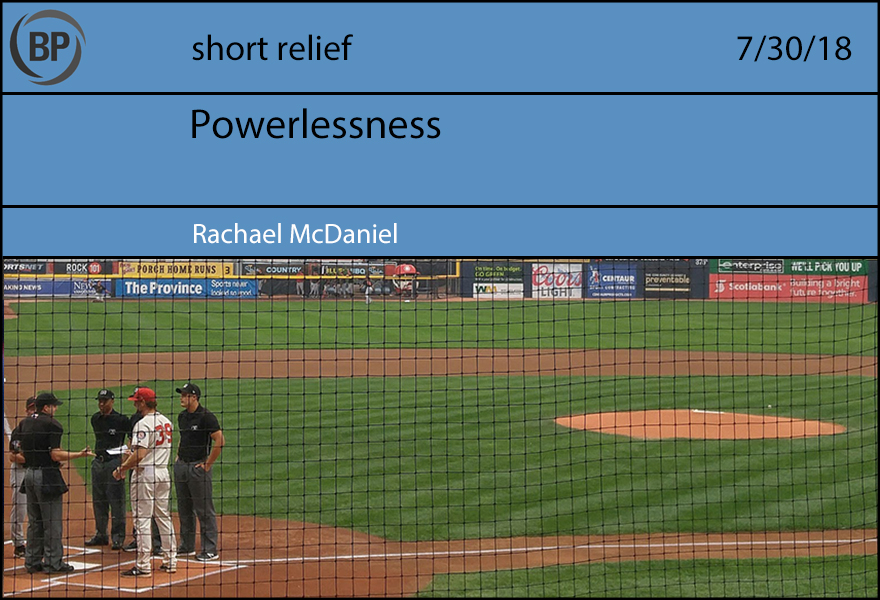 My brother was playing in a Little League game this weekend. The game in question was a rematch against the team that they had lost to in their previous game, a loss that hadn’t come without an absurd level of controversy for a game between 11-year-olds in the Vancouver area: after the game, the manager of the opposing team had received a five-game suspension for attempting to influence the umpire’s decisions.

My brother’s team ended up winning the rematch, though not in the way they’d probably have liked to. The other team was forced to forfeit after two innings — again, because of the other team’s coaches trying to influence the game. The suspended manager, who wasn’t supposed to be near the field at all, had been found to be sitting in the stands, talking strategy with the other parents running the team in his stead.

Somehow, though, that wasn’t the worst part. My brother reported that the banned parent coaches had been laughing and mocking the kids on his team when they made errors. He said, too, that the other team’s pitcher — the banned manager’s kid — had made an effort to dig a hole in the mound with the toe of his cleat between pitches, around where my brother’s own foot would land when he was pitching, trying to throw him off.

My brother’s team is pretty bad. They’re unlikely to make the playoffs. Winning that forfeited game, or even getting back the first game they lost to this team, doesn’t matter much for their championship prospects. What matters for them at this point isn’t winning the games, working toward some endpoint of trophy-holding and photo-taking, at which point the cycle will reset itself. It’s that they get to go out and play baseball games. It made me sad that they didn’t get to do that. Neither did the kids on the other team.

Maybe the other team is in first, or somewhere close to first, and they need every win they can get. I don’t know. But I’ve been thinking a lot about being a kid lately, about the ways that ideas are embedded into your head in ways it takes entire lifetime to unpack, and how little power you have as someone who is three or seven or 11 years old to question what you are being told to do and believe. Adults should be responsible. They should know better.

There are a lot worse things to have hammered into your child brain than that you should try to win no matter what. But for me, at least, that’s what baseball is good for — a way to take a few hours and forget about the worse things, to feel good about something that matters less. I feel bad for those kids. They shouldn’t have had that taken away from them.