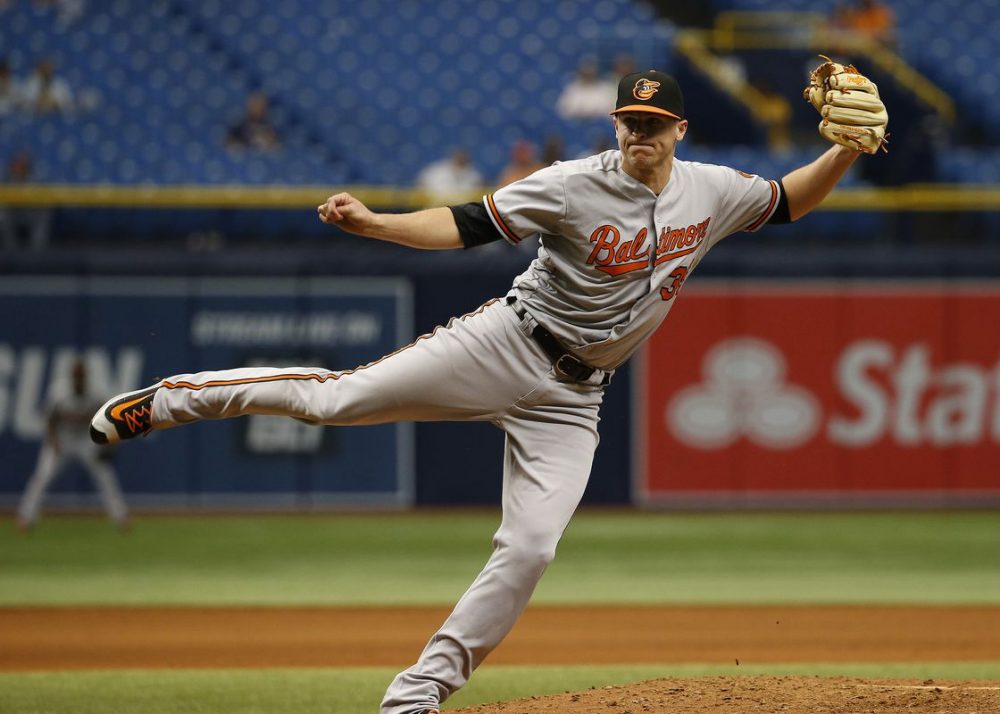 Without a single professional start, former 42nd-round pick Brad Brach managed to string together seven straight seasons in which he eclipsed 75 innings. That streak ended in 2017, when he pitched just 68 frames in 67 appearances, but even that is a respectable workload for a high-leverage reliever. Few relievers can answer the call on the bullpen phone as often as Brach, and fewer still can come in and use three or four pitches to attack batters on either side of the plate once they do.

Were Brach still fully the guy who dominated the league as recently as last season, the Braves would have had to pay a much higher price to acquire him. It isn’t so. Brach’s fastball was way off its usual pace in April, and after a brief recovery, he had another velocity slump in June. He’s throwing harder in July than at any point since last August, but the overall numbers are still somewhat concerning. 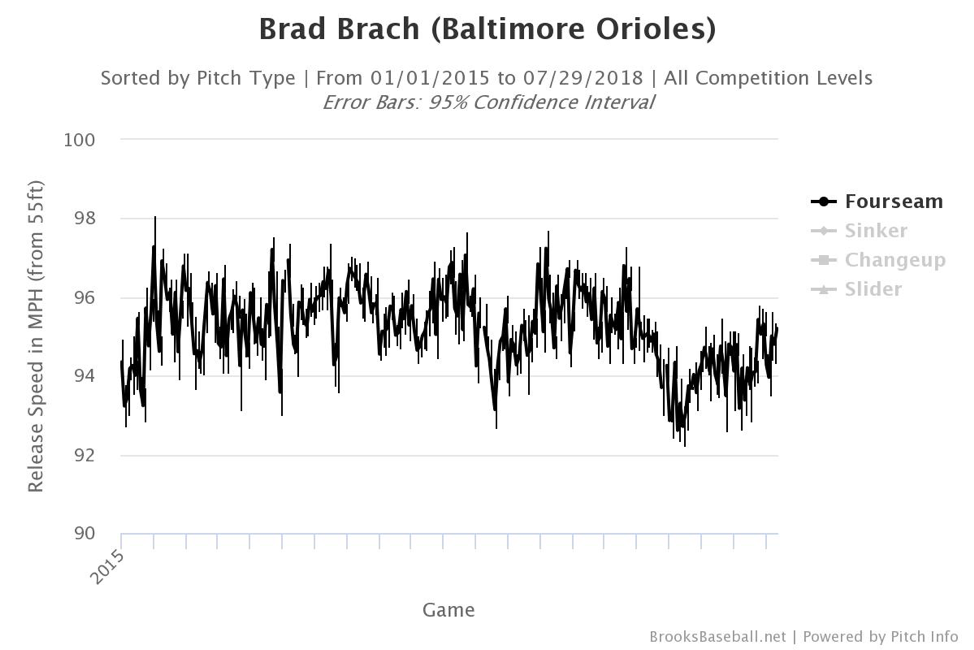 Brach is also getting tattooed by left-handed batters this year, to the tune of .342/.422/.452 and 12 strikeouts against 10 walks. The reason for that might be related to the reason why, despite all that durability and the four quality offerings and the neutral platoon splits, you never heard anyone suggest that Brach might be worth converting into a starter. Here are Brach’s horizontal and vertical release points for all four of his pitches, by season, since 2015. 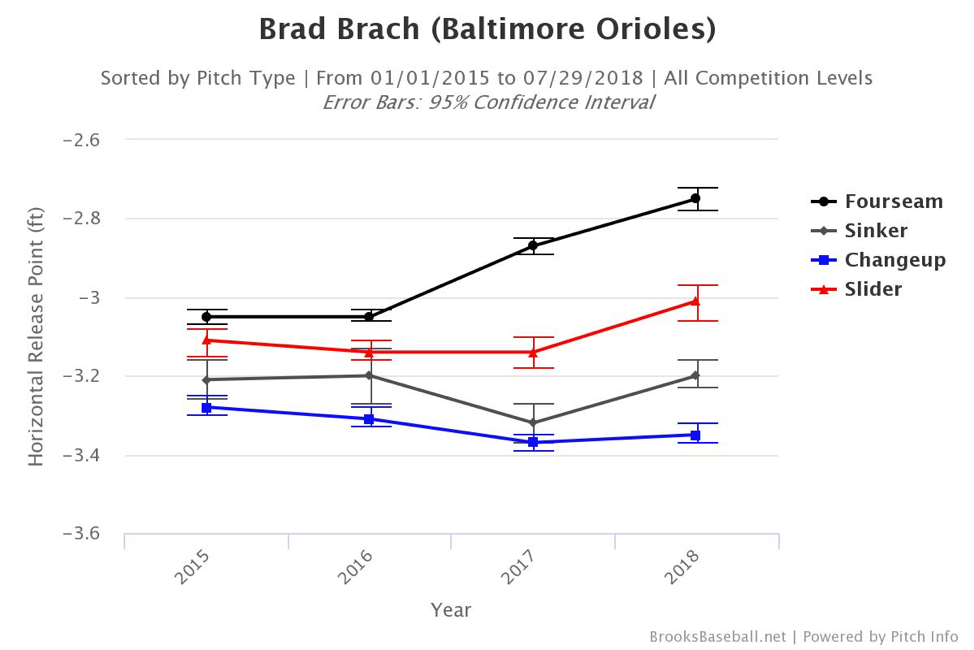 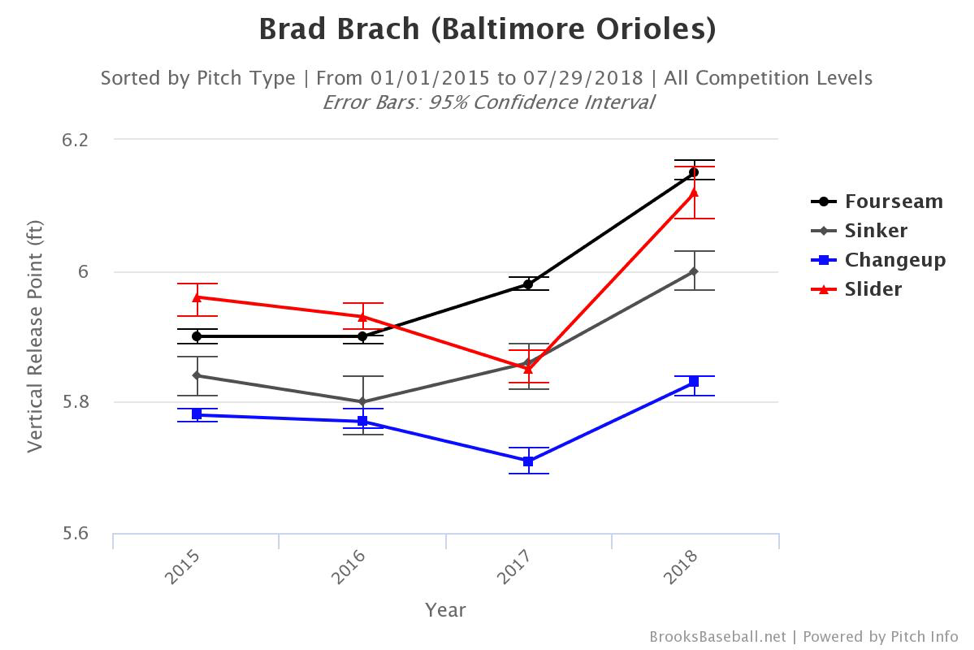 Brach has a herky-jerky, short-arm delivery that has always helped his stuff play up (though his movement is so good that it didn’t need all that much help). He’s never had closely clustered release points on his pitches. This season, however, the difference in his arm slot for his four-seamer and changeup have diverged so far that it’s laughable, and it’s eating into the effectiveness of each pitch against lefties.

He’s throwing his sinker more against lefties this year, at the expense of the straighter fastball, but he’s getting dramatically fewer swings with it, and he’s not getting ground balls with the changeup the way he was last season. Again, Brach has always been prone to wide differentials in release points, but this season he’s 11th (of 263) among qualified pitchers in Release Differential, according to our pitch-tunneling stats. He intentionally changes his slot from pitch to pitch, but not in a way that disguises those pitches.

All that said, when Brach’s velocity has been near his pre-2018 levels this year, his overall performance has been right in line with that standard, too. If he can be used primarily against righties, or if he simply regains the consistent velocity he had until this spring, Brach could provide excellent high-leverage innings. His rubber arm will be a good fit for the Braves’ bullpen, which has been characterized mostly by its lack of that very feature over the past couple years.

Alex Anthopoulos hasn’t yet pushed in any prospect chips, but by trading away $500,000 in international free-agent allowances, he’s added two veteran arms to the relief corps in Brach and Johnny Venters. It’s not hard to see the upside, and it’s hard to imagine the Braves actively regretting either move.