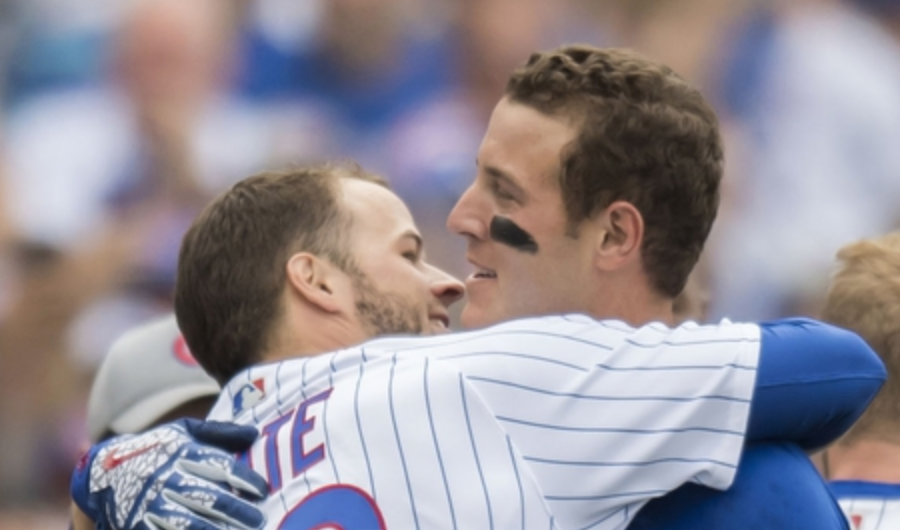 There’s an urban legend concerning a quote from legendary Italian soccer manager Giovanni Trapattoni about the powerhouse club of Italy—Juventus. The phrase he allegedly used to describe Juventus was to compare them to that of a seven-headed snake. Even if you lop off six of its heads, it’s still a very dangerous creature since it’s still a snake. On Thursday afternoon, the Diamondbacks managed to take off six of the Cubs’ heads.

Most of those heads were taken off in the fifth inning, which is when Nick Ahmed picked a pretty good time to hit Arizona’s first grand slam of the season. It came with two outs and the team only up by a run. Ahmed’s grand slam stretched their lead to five and put the Cubs on the chopping block.

However, the heads remaining from Chicago’s seven-headed snake continued to bite back. The Cubs scored two more runs in the very next frame, and added another in the sixth inning, but they were still down by two runs heading into the ninth. However, it only took four at-bats (and two at-bats in particular) to change all of that for the Cubs.

Ben Zobrist led off with a walk, and with the team down to their final two outs, David Bote came up to bat and not only brought Zobrist home, but he brought himself home as well in order to tie the score.

🎶 Certain as the sun
Rising in the east 🎶 pic.twitter.com/GXHJjwuLcd

Anthony Rizzo followed up Bote’s dinger with one of his own.

If you’re going to beat the Cubs, you’ve got to finish them completely, or else that final living head of the snake will come back and avenge the rest of the snake.

Great American Ball Park in Cincinnati has a reputation for being a bandbox since it’s so friendly to power hitters. The rep obviously was deserved as the Phillies and Reds combined for nine home runs. Unfortunately for the home team, the Phillies hit the vast majority of those, as they went deep seven times. Fans of small ball, look away!

Meanwhile, at the ballpark with the highest park factor in MLB this season, we got another slugfest between the Athletics and Rangers. Once again, the A’s ended up coming out on top, winning their sixth straight. It seems like the guys in the A’s clubhouse seem to enjoy taking turns when it comes to being the guy to light up the scoreboard, with Matt Chapman being the guy who ended up giving the Rangers headaches. He hit a go-ahead homer in the second inning and was a general nuisance to the blue team.

There were only three runs scored at Fenway Park, and two of those were scored by the Twins, so they managed to hand the Red Sox a rare defeat. Mitch Gardner’s double in the eighth inning put Minnesota up 2-1.

That meant that fans at Fenway got to enjoy The Fernando Rodney Experience. This time, it ended up being a positive experience for the Twins and it didn’t stop on the field, either. Granted, you are never going to hear a player respond to this type of question with, “No, we’re waving the white flag,” but Fernando Rodney is still very much all-in.

They’re currently seven games back of Cleveland and they’re actually much further away from the second Wild Card spot than they are from the division leaders. Plus, this is baseball so who are we to doubt him?

The Braves reunited with Jonny Venters with a trade after Ronald Acuña Jr. hit a home run against the Dodgers. Any time I get an excuse to post this guy’s swing, I am going to take it.

That was the good news for the Braves as the Dodgers jumped out to a big lead and won 8-2. This included Manny Machado getting on the Dodgers’ scoreboard when it comes to home runs. Mannywood is officially back up and running.

The first of Manny. #Dodgers pic.twitter.com/ldUaHXlzCe

This is probably more on Alex Gordon and the Royals (who suffered their 71st loss of the season—yikes!) than it is a truly amazing play from Aaron Hicks, since it’s not like the game was really on the line, but it’s still pretty cool to see a team end a game on a play at the plate.

Trying to ignite a late-game rally?

Not when @AaronHicks31 is manning CF! This 98.7 mph throw home sealed the @Yankees win over the Royals in style. 💪 pic.twitter.com/nPPKhX8E8K

The A’s have truly been playing some amazing baseball for a while, which makes it even crazier to think about how they’re still in third place in both the AL West and the Wild Card. They’re only one game back of the Mariners, and at 61-43 the A’s are just as close to the second spot as the 54-47 Rockies are to the second Wild Card spot in the NL.

As fate would have it, these two teams are going to be facing each other in what should be one of the more interesting interleague series that you will see this season. Friday’s pitching matchup seems intriguing as well, as Sean Manaea (3.87 DRA, 105 cFIP) will take to the mound for the A’s while Kyle Freeland (4.24 DRA, 100 cFIP) will be tasked with trying to figure out how to stop Oakland’s offense. Who knows? Maybe one of these teams will be in a playoff position by the time we get back to you Monday.