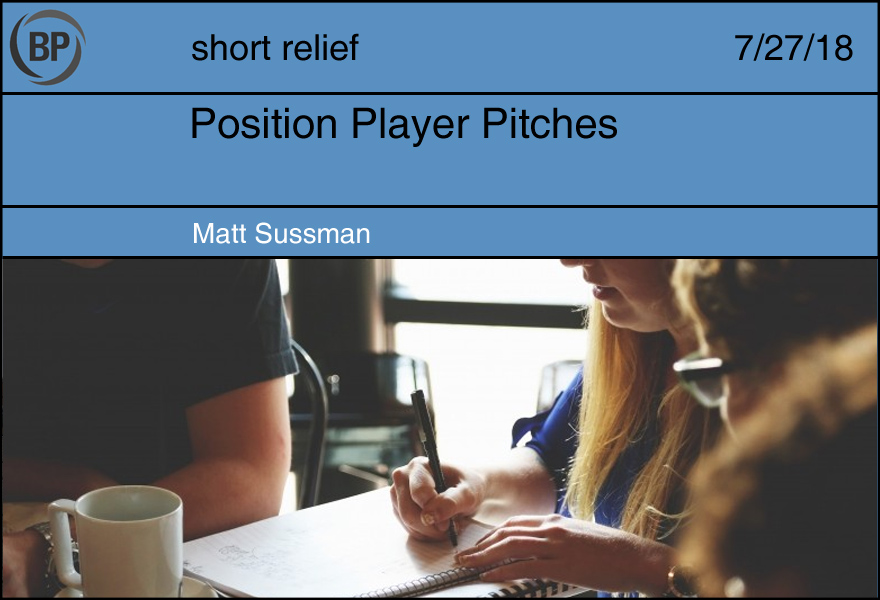 Anthony Rizzo: Okay, it’s a workplace sitcom but everyone works at, like, a furniture store. Business is bad, but this millennial comes in and tries to change everything. The well-meaning store owner, you could get someone like the dad from Family Ties, keeps going at odds with this new hire, a girl out of college. Open to suggestions on casting.

Ryan Goins: You know how there’s all these zombie shows and films? So it’s a show about a podcast about these two brothers that basically rant about how there are just, like, so many zombie shows and films. Then in the second season they think they are getting attacked by zombies. As it turns out it’s aliens. A little out there, but I think it would work on Netflix.

Kendrys Morales: So it’s a food reality show, but two restaurants have to make the other’s signature recipe. The judges are, I suppose, either teens who are picky eaters, or celebrities. The winner gets a large trophy, but both restaurants get exposure. That way you don’t have to pay them.

Alex Avila: What if instead of having position players pitch, you expand the major league roster to 28 and then dress 25 players on any given night? 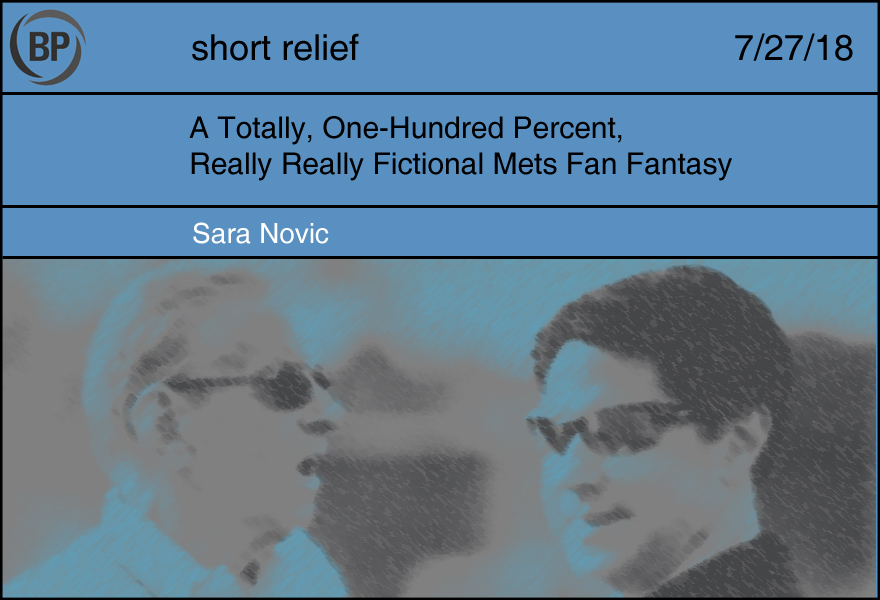 “The Mets say they have an insurance plan on Yoenis Cespedes’ contract. … For reference, the Mets recoup 75 percent of David Wright‘s contract via insurance. Jeff Wilpon said in January that he considers Wright’s entire contract part of the payroll, and so the team does not reinvest money saved via insurance into baseball operations.” — Anthony DiComo, Mets beat writer, MLB.com

The agents went in over the Queensboro Bridge. It was not their bridge of choice, aesthetically, for such a momentous occasion. The Brooklyn Bridge was more iconic, would play better in the retelling of the story later; but alas, the Brooklyn Bridge went to Brooklyn, and their business was elsewhere.

They pushed on through Long Island City and followed the elevated 7 platform out to Flushing Meadows. They wore neatly pressed black chinos and, beneath their sports coats, umpire shirts. They thought it was a nice touch, an emblem of league authority they could carry with them into the room in case things got ugly.

The agents—three of them—were silent in the car, puffed up with the import of the task at hand. The sky was clear, the sun streaked bright through the windshield, and the air smelled of Justice™. They really had to talk to Bill about that, actually—didn’t he know Axe Body Spray was for teenagers? One of them opened the window.

They had it on good intel that the men would be in their office today, taking another meeting with another insurance company. It was early, and the stadium parking lot was empty; not even the sanitation workers were due in yet.

The office was all glass as if to mock fans’ calls for transparency. Even the agents half-expected to bust in to discover stacks on the table, but the door was unlocked, and they walked in to find the two men hunched over a laptop. Fred looked up, snapped the computer shut, but gave no other indication of wrongdoing or fear.

“Fred. Jeff,” one of the agents said, tipping his black cap at them. “It’s time.”

The other two approached, zip-tied father and son’s hands and led them next door to the video-conference room. They went quietly and eased into their lush leather chairs before the video screen.

The agents logged in on Skype, where the Commissioner was awaiting their call. He appeared on screen, then stepped back to reveal the auction floor in place. The buyers, it appeared, had already been briefed, and were abuzz with anticipation. The Commissioner turned to the crowd, and the agents, father, and son stared at his back while the room quieted. “OK,” he said. “Let’s start the bidding.” 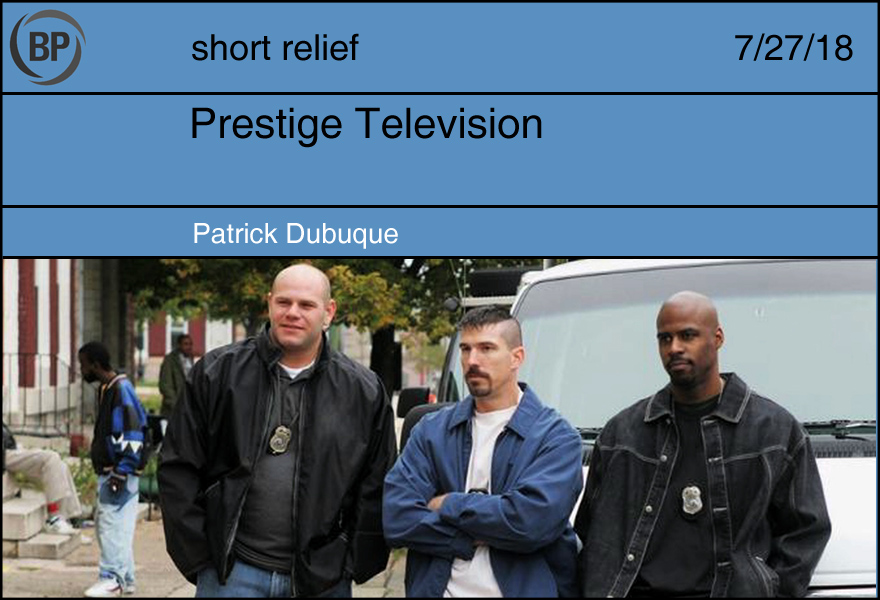 A confession: I’ve never seen an episode of The Wire. Or Game of Thrones. Or Deadwood. I never watch television at all, except an episode of Mystery Science Theater 3000 a couple of times a year. It’s not that I’m too good for television; as a child I threw hours of my life at syndicated shows. Cheers, Night Court, sure, but also detritus like Small Wonder and Step by Step. It’s not complicated; I didn’t mature. I just had kids.

Recently, for some reason, I clicked on a link ranking Wire episodes, and searched for the first one. It came in 19th. The author, Jennifer Wood, quoted a dubious review by Rob Owen of the pilot from 2002:

“The Wire” gives so little, it almost begs to be abandoned; then a scene or a smidgen of character development offers a hook that might keep viewers interested. But TV shows, no matter how complex or thought-provoking, shouldn’t require that much work.

This is, unquestionably, why I can’t watch the show. I am not, in my two-job-two-child existence, capable of giving it the energy it demands. It’s television, in this golden era, that is too good for me. But how much can art responsibly demand from its recipients? The question isn’t often asked, because we usually allow the supply-demand curve make the decision for us. The Wire didn’t need to make money, didn’t make money, refused to adulterate itself. That was HBO at its peak. The company has softened that stance.

Each sport has to make is own calculation, and usually does so through the same process. Generally, broader appeal equals more dollars. But a true sport should be able to offer entertainment at all levels: the visceral and simple, for the young and the neophyte, and the intricate and metaphysical for the veterans. Statcast, the first down overlay, the glowing puck, the floating strike zone. Everything, all at once, for all people. The heavy-handed attempts usually fail, but the sport doesn’t die. New people become fans.

Ultimately, I think I might side with Rob Owen, even if he was offered the 2012 Corey Kluber scouting report of television reviews. Good art shouldn’t require that much work. But it should reward it. It’s not easy to make the same baseball game serviceable for mowing lawns with headphones and deep-set, chess-like analysis. You can take what you need from it. In that sense, maybe baseball is more like MST3K: the jokes you don’t get don’t bother you, but the ones that land feel like they were written for you. And the same characters are waiting for you, comfortable and pleasant, day in and day out.

You need to be logged in to comment. Login or Subscribe
Sharky
Thank you, Sara. As a fan, I need more of these. The Wilpons are running out of people to blame. I am confident they will never sell or be asked to sell. But maybe they finally hire some good talent and let them do their jobs?
Reply to Sharky