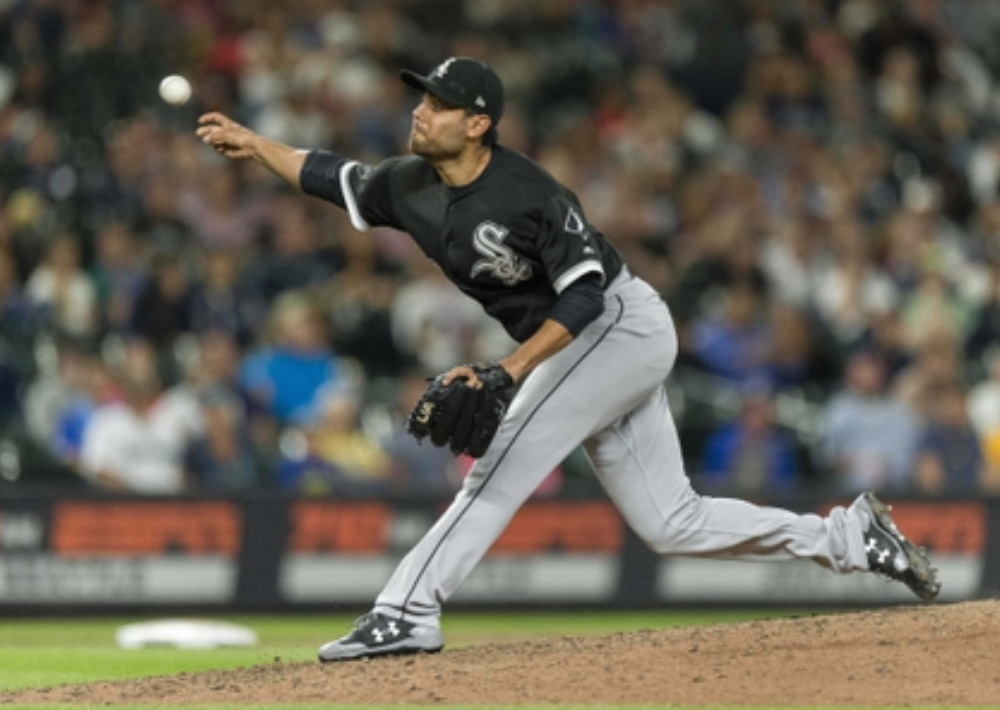 Twelve years into his MLB career, Joakim Soria found a new arm slot this spring. As James Fegan chronicled in a June piece for The Athletic, Soria tried dropping down to wriggle out of a long entanglement with Baltimore’s Jonathan Schoop, and has been cruising ever since.

However, Soria’s change in release point hasn’t been uniform. He’s altered his delivery much more on one pitch (within an atypically deep repertoire, for a reliever) than on the others. After a decade and more as primarily a fastball-changeup guy, mixing two breaking balls in evenly and putting on miniaturized exhibitions of starting pitching at the ends of games, Soria has finally turned into a true, modern, dominant, one-inning reliever, and perhaps the most common kind: He’s a slider monster.

Here are Soria’s average vertical release points on each pitch, by month, since the start of 2015. 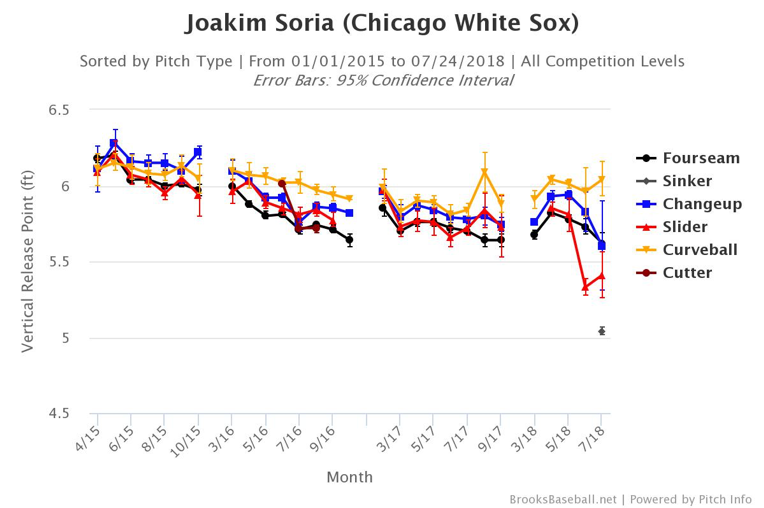 Here’s his pitch usage over the same period: 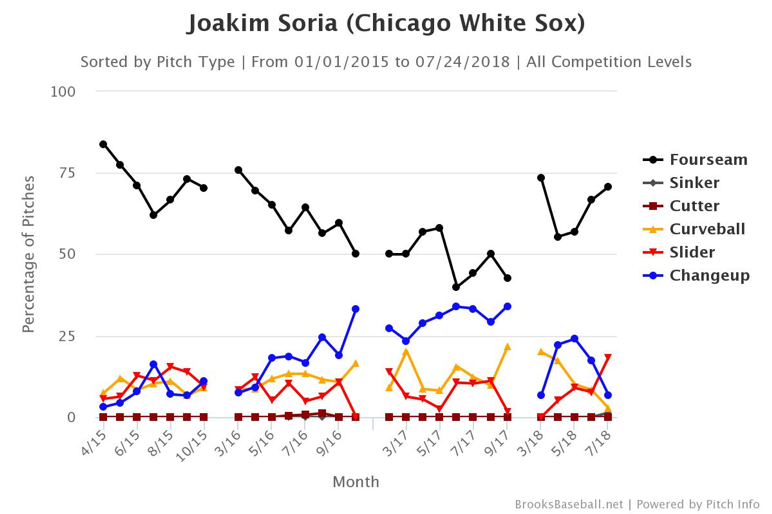 Until his recent revelation, Soria pounded opposing hitters with fastballs, and when he went to his secondary stuff, it was strictly to keep them off balance. Even late in 2016 and throughout last season, as he experimented with much heavier use of the changeup, Soria depended on his ability to cluster release points, and to sequence, command, and tunnel his pitches, making it hard for opponents to square him up.

The new arm slot and the increased slider usage—he’s already thrown more sliders this month than in any month since August 2015, and he’s thrown it more on a rate basis than at any point since 2013—make him a totally different pitcher. He’s still capable of spotting his fastball, but increasingly, that offering is the stage-setter, and the slider is the put-away pitch.

With this change in arm angle, Soria has created more movement on his slider than just about any other pitcher in baseball has. Of the 317 pitchers who’ve thrown at least 10 sliders in the month of July, none have more horizontal movement than Soria’s, and only 22 have more vertical movement. The only guy who’s close to Soria in terms of movement in both planes is Brad Hand—a serendipitous name to show up here, given what the next week figures to hold for Soria.

Soria has paid a price (at least theoretically) for this increase in movement, of course. Our tunneling numbers paint the picture: the release-point differential between Soria’s fastball and his slider has widened drastically. There’s also a larger differential in flight time between the two pitches.

The cost of this radical change, which makes it much easier for batters to identify the slider out of the hand, has been virtually non-existent. Batters are still swinging, and they’re whiffing like crazy on the pitch. In 23 appearances since he discovered that new delivery, Soria is now up to 22 1/3 innings, 89 batters faced, 29 strikeouts, and a 0.81 ERA. He’s posting the best cFIP he’s had since he was an elite closer in 2009, and his current DRA- would be his best ever. Indeed, at age 34, Soria is pitching like his 24-year-old self, and has been one of the dozen best relievers in baseball.

Consider this an object lesson about the nature of relief pitching. Soria has long been a workman, an artisan of pitching, confined to a relief role as much by inertia as by any other single factor. He did all of the little things pitchers must do in order to have success while pacing themselves, while turning the lineup over a time or two. That probably contributed to his longevity. As he approaches the end of his career, however, Soria is pitching a bit more with his great stuff, and a bit less with his guile and intelligence. Relievers can succeed without tunneling well, without sequencing carefully, and without having pinpoint command. That’s why, for a reliever with plenty of polish, there are so many avenues to success.

Soria is owed about $3 million for the balance of the season, and there’s a club option for 2019 worth $10 million, with a $1 million buyout. It seems overwhelmingly likely that the White Sox will trade Soria some time in the next five days, and when that happens, some team will be adding a top-echelon reliever at a bargain price. Even with Hand, Zach Britton, and Jeurys Familia already off the market, there are ways to aim higher than Soria. Ryan Pressly of the Twins could be available. For a king’s ransom, A.J. Preller might let Kirby Yates and his two-plus remaining seasons of team control go.

If a club needs an upgrade to its middle-relief corps and would rather spend money than prospect capital, however, Soria is an excellent option. There are at least a couple of teams that fit that bill right now, so the White Sox should be able to play them off one another and land a solid prospect in exchange for the side-slinging, slider-spinning, new-and-improved Soria.