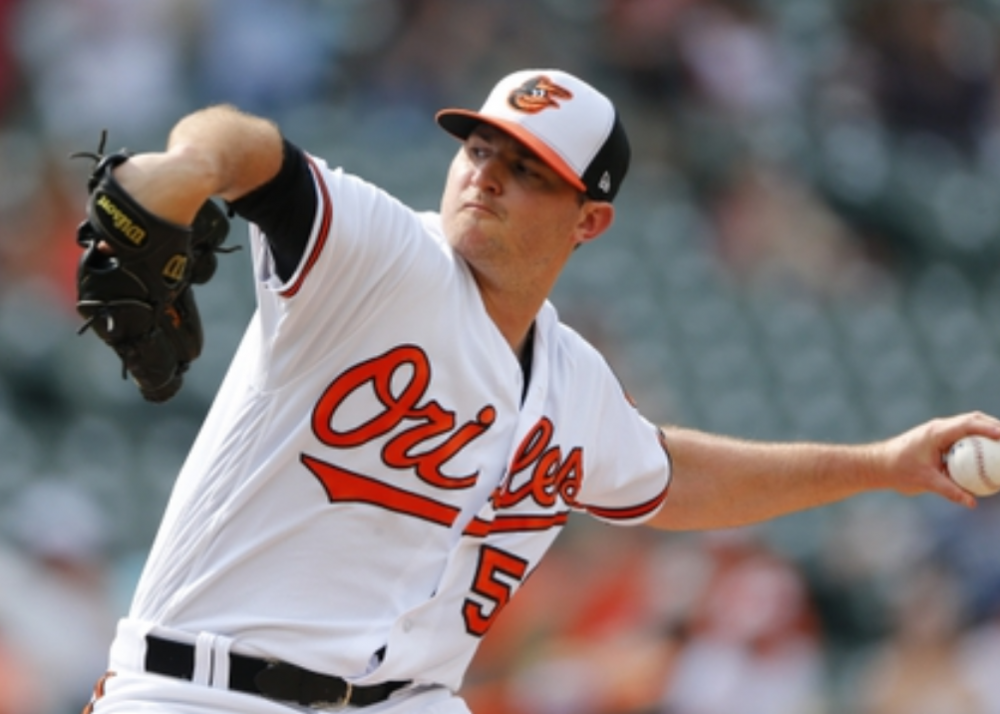 For the second straight year, the Yankees have made a big midseason move for relief help despite already boasting one of the best bullpens in baseball. Last year it was a July 19 trade to add White Sox right-handers David Robertson and Tommy Kahnle to a bullpen that had MLB’s fifth-best ERA, and this time around it’s Orioles left-hander Zach Britton joining a relief corps that has MLB’s best ERA and second-best Win Probability Added.

New York’s bullpen now includes four former All-Stars in Britton, Robertson, Aroldis Chapman, and Dellin Betances, plus the All-Star-caliber Chad Green, who has a 2.15 ERA and 161/27 K/BB ratio in 117 innings since shifting to the bullpen full time last season. Even their lower-leverage arms like Adam Warren, Jonathan Holder, and Chasen Shreve are good enough to be working higher-leverage spots for many teams. It’s an embarrassment of riches, even with Kahnle currently demoted to Triple-A.

General manager Brian Cashman clearly believes that high-end relievers can make a massive impact, particularly for a team that’s all but assured of making the playoffs and, once there, can potentially use scheduled off days to expand the bullpen’s workload. It also may be a sign that Cashman views the price tags for high-end rotation help as too high. Or perhaps he just felt the price was right for Britton, an impending free agent still rounding into form following a torn Achilles’ tendon. Whatever the reasoning, Cashman has once again built an incredible bullpen capable of chewing through large swaths of innings.

Britton missed about half of the 2017 season with forearm and knee injuries, and then ruptured his Achilles’ tendon in December, costing him the first two-plus months of this season. He debuted on June 12 and struggled early on, but then worked eight consecutive scoreless appearances—including two against the Yankees—leading up to the trade. Compared to his 2014-2017 peak, Britton’s strikeouts are down, his walks are up, his ground-ball rate is merely very good as opposed to the best in baseball, and he’s missing 2-3 miles per hour on his power sinker.

Within that, however, there are signs that he’s getting stronger as the gruesome non-arm injury disappears into the rear-view mirror, although it’s fair to wonder how much more progress he can make between now and October. At the very least, Britton gives the Yankees a left-handed setup option to pair with right-handers Robertson, Betances, and Green as the bridge from the starters to left-handed closer Aroldis Chapman. And if Britton makes significant progress over the next couple months, the Yankees’ bullpen would be downright scary, giving rookie manager Aaron Boone a half-dozen buttons to press, none of which could really be a “wrong” option.

Last postseason, the Yankees played 13 games. On average in those games, their starters recorded 15 outs and their relievers recorded 12 outs. Six times their starter failed to make it out of the fifth inning, including Luis Severino‘s one-out start in the Wild Card game … which the Yankees won despite spotting the Twins a 3-0 lead thanks to 8 2/3 innings of one-run, 13-strikeout relief work. They seem destined, or at least prepared, for a similar split this October. When a reasonable deal for a solid starter like J.A. Happ presented itself, Cashman took advantage, but also he’s spent the past several years years assembling a bullpen so good and so deep that it can essentially do the job of a starting pitcher … and then do it again the very next game. —Aaron Gleeman 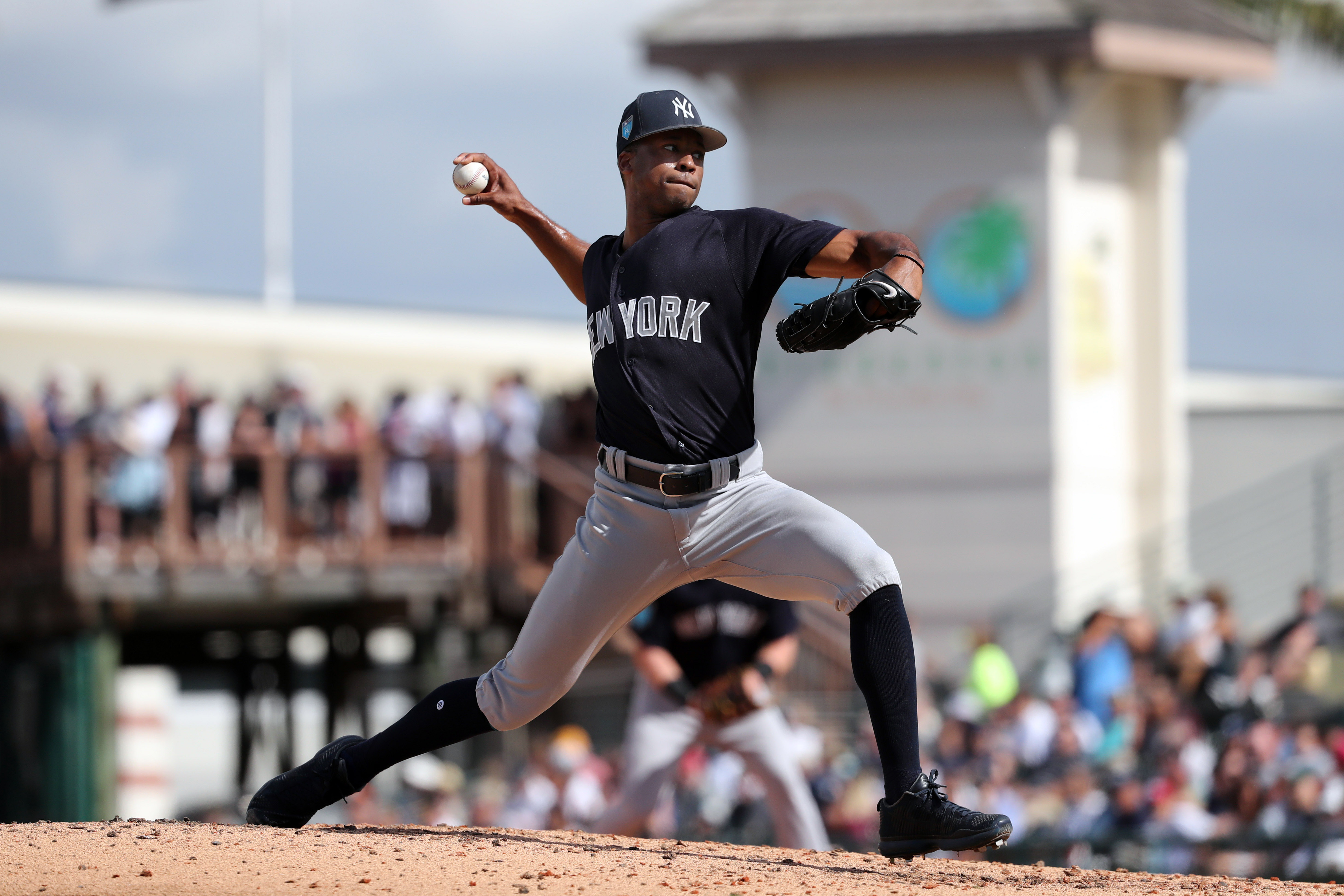 The headline name here is Dillon Tate, about whom I’ve written quite extensively in the not-too-distant past. Drafted fourth overall by Texas in 2015, Tate has simply never lived up to his lofty draft position, quickly imploding as a starting prospect for the Rangers and ending up pawned off on the Yankees in the 2016 Carlos Beltran trade. In the intervening two years, the Bombers have brought him along very slowly, rebuilding his stock level-by-level and giving him ample time off for minor injuries.

What they have now in Tate is a 24-year-old pitching well at Double-A, relying primarily on a fastball that most commonly comes in from 90-94 mph without much movement, and a slider that flashes plus when tight but doesn’t really classify as a swing-and-miss out pitch. The changeup is still a show-me pitch and still has room for more. His command is fine, but the combination of his slight frame and his background as a reliever in both college and the pros doesn’t exactly scream 180 starting innings. There are absolutely still believers that see Tate as a mid-rotation starter or even more—especially if you see him when the fastball is more 94-97 or see the slider at its best—but most see him as a fourth starter or a fastball/slider short reliever with the pitches playing up in short bursts.

If Tate is ultimately a fastball/slider short reliever, he might end up looking a lot like Cody Carroll. We make jokes about the Yankees having a certain type of pitcher they like to draft and develop, and, well, I could write this report by heart: “A [late-round] pick out of [a southeastern college], [Yankees prospect] pumps strikes with a big fastball, complemented by an above-average slider that’s improved several grades since he turned pro. [Prospect] has torn through the minors with video game-like numbers, and is about ready to pitch in the majors.” Carroll throws a little harder than most of the cohort, up into the high 90s, but you get the picture. The fastball/slider combo is good enough for higher-end relief upside here.

Josh Rogers also fits in our Yankees Prospects Against Humanity game if you turn the velocity a few ticks down; he’s a lefty starter and not a righty reliever, of course. But he got a $485,000 bonus in 2015 as a draft-eligible sophomore 11th-rounder out of Louisville, has gone through the usual Yankees pitching developmental paces, and is now on the precipice of being a useful starter. That’s the difference between these two organizations in a microcosm: The Yankees acquire and develop so many MLB pitchers out of so many different places that they end up tossing them into trades like this for lack of 40-man roster room—it’s no coincidence that all three pitchers traded here need to be protected from the Rule 5 draft this offseason.

Meanwhile, the Orioles have no such ability to develop starters, and keep trading for the surplus stock. I suppose trading with the enemy beats giving fifth-starter candidates $20 million in free agency, at least. As returns for impending free agent relievers go, well, this isn’t Gleyber Torres. But Zach Britton isn’t Aroldis Chapman anymore, and three close-to-ready arms with upside sure beats what the Mets got for Jeurys Familia. —Jarrett Seidler

You need to be logged in to comment. Login or Subscribe
Ed Mega
I can't find the Transaction Analysis for Jeurys Familia.
Reply to Ed
Craig Goldstein
It has not posted yet
Reply to Craig