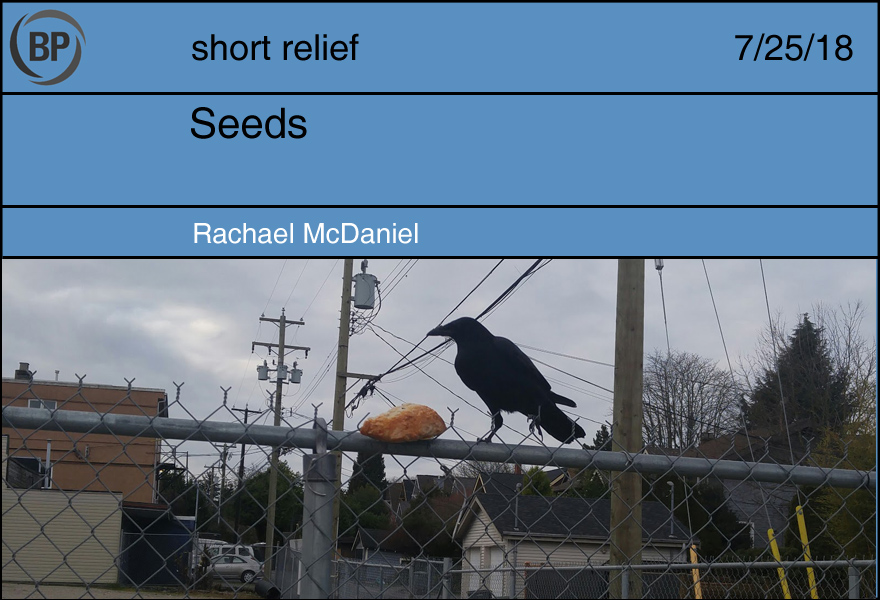 A crow sits on a traffic pole ahead of you. You are walking slowly. The sun is too harsh to move any faster. It doesn’t matter how fast you walk, anyway; you have nowhere to go this time. You are not going to be out of the sun, not until it sets. Then you will have no excuse to walk so slowly. Your bag digs into the skin of your shoulders. You are going to have bruises.

As you pass under the pole, the crow lets out a caw and materializes in front of you on the sidewalk. It flutters its wings. You stop. Your arms go involuntarily limp, and your bag slides off your shoulders with a thud and a concerning crack.

The crow doesn’t flinch. It caws at you again, then flutters a bit to the left. It hops off the curb and starts hopping across the empty, cracking street, a little flash of shiny black crossing the desert. You look at your bag on the sidewalk, now with a small puddle forming around it, meaning that the crack was your water bottle, and everything you own is now soaking. The crow is still hopping across the road. You crouch down, put your hand in the water and drag it across your face. It doesn’t feel good.

When you look up again, the crow isn’t on the road anymore. It isn’t on the curb, or on the sidewalk on the other side of the street. You look up to the pole where you first saw it sitting, but there’s nothing but the sun burning into your eyes. This is, for some reason, a big deal. You squint at the roofs of the houses on the side of the street, into the trees in the distance, looking for that flash of black. Nothing, nothing, nothing.

And then—something. Across the street, past the decrepit fence that you had assumed was cordoning off an abandoned lot. On closer inspection, it encircles a field of impossibly dry, colorless grass, and on the other side of the field are two ramshackle dugouts. And in front of the dugout of what must have once been left field—the crow, picking at something in the dirt.

You are seized by an irrational desperation. You abandon your bag, sprint across the street and hop the fence, the rust staining your palms, the jagged ends of the links stabbing them. You keep running across the field, across the broken glass and cigarette butts. The field is so dry that you kick up dust with each step you take, and it sticks to your still-damp face and stings your eyes. The crow keeps picking.

You stop around 10 feet in front of it. There is no mound here, no infield, even. No one has played baseball here for a long time. The crow picks and picks, ignoring you, and as you stand there, chest heaving, you see what it is picking at. There are sunflower seeds on the ground, spilled out from a bag sitting on the dugout. The bag looks almost full, but the crow shows no interest in it. You take a step forward. The crow looks at you for a half-second, short enough that it might have been accidental, before it goes back to its seeds.

You take another step, and another, until you are in the dugout and the bag is in your hands. It is new, its plastic still shiny; it looks to barely have been touched. Who would have been here at this field, in this dugout, eating sunflower seeds? Could anyone possibly still play here? You hadn’t thought you were going to eat today. You look at the bag in your hands, shaking, and you blink very hard, because you will not allow yourself to be the kind of person who cries about sunflower seeds.

When the sun sets, you will have to keep walking. But for now you sit on the bench, spitting nutshells on the ground, watching the silent crow. 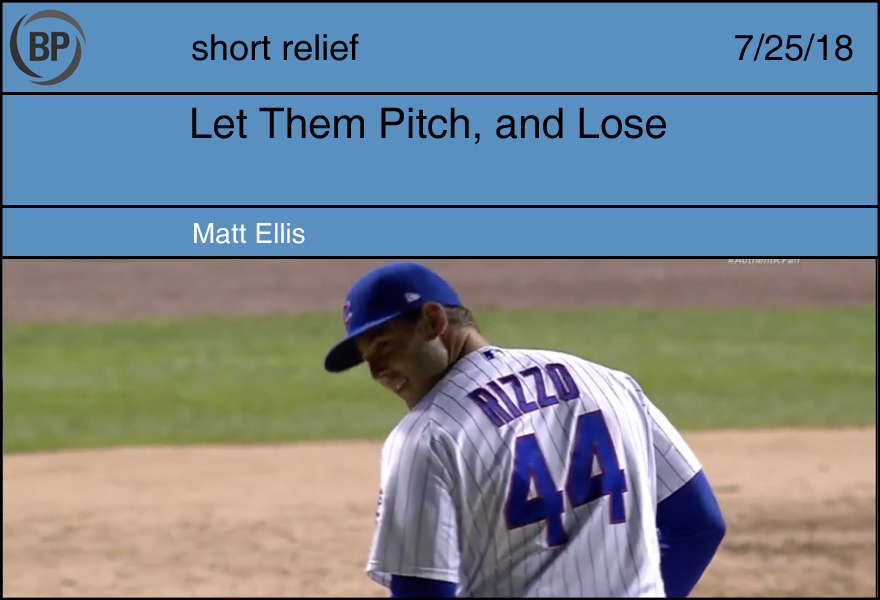 Position players: they pitch too much, they don’t pitch enough. The back and forth has been quite telling, and if we’re entirely honest, not unwarranted. First, the data tell us that this year has already seen more position players pitching than any in the history of Major League Baseball. Second, the eye test, where we all used to share in on the screengrabs and GIFs of Jesus Sucre tossing 90 in a Rays uniform while José Alvarado sits in the bullpen having thrown the day before.

It used to be fun! It did, and I remember it. But it’s getting boring, and not simply boring but rather a lazy shorthand for roster construction, conceding games as a metaphor for conceding seasons, as teams move to rubrics of efficiency with half the league tanking and half going for it. I wonder, though—do we fully understand the stakes of this turn as historical event? Do we realize the contradiction between demanding our infield hold true to unregulated shifts and maximized value of 1B platoons while the tendons of $350k bullpen guys get churned through next to bullpen catchers who can hit high 80s in a blowout game? Victory, and perhaps more importantly order, become the lure when we marry these things, and yet we don’t demand one take precedence over the next.

In all, it reminds me of a quote from *rolls eyes* Moneyball, in which Michael Lewis tells us that:

Before it had a chance to become a proper argument, the conflict between the old and the new baseball men was resolved by the budget crisis. Tony La Russa left when the new owners renounced the old habit of bankrolling millions of dollars in losses. Alderson set out to find a manager who would understand that he wasn’t the boss, and landed upon the recently fired manager of the Houston Astros, Art Howe. “Art Howe was hired to implement the ideas of the front office, not his own,” said Alderson. “And that was new.”

In the 10 years since, we continue to demand our front offices keep up with trends in measuring on field production while leveling the value of a utility player with a fourth outfielder with a Thursday reliever with a number-five guy—who can move to long relief if you need. We think about the exception that produces the norm—a second baseman throwing a silly curveball in a blowout—and we simultaneously scream at inefficient contracts that keep our teams from sneaking back into that second Wild Card spot that can be won less by arms and more by synapses.

Meanwhile, in Europe, a strike against Amazon continues unabated. Front offices around the league continue to dance between the dialectic of Old Baseball Guy and New Numbers Guy (and they are obnoxiously, mostly, Guys) and yet we celebrate the increasing quantification because it leans into wins, or at least the chance of a win. I wonder, really, what it might look like to accept the chaos again, to toss that fourth outfielder on the mound not because it saves a bullpen arm but because the rest are tired—because there is no other option left. It does little to win games, but perhaps that is a mode of viewing worth remembering on its own. 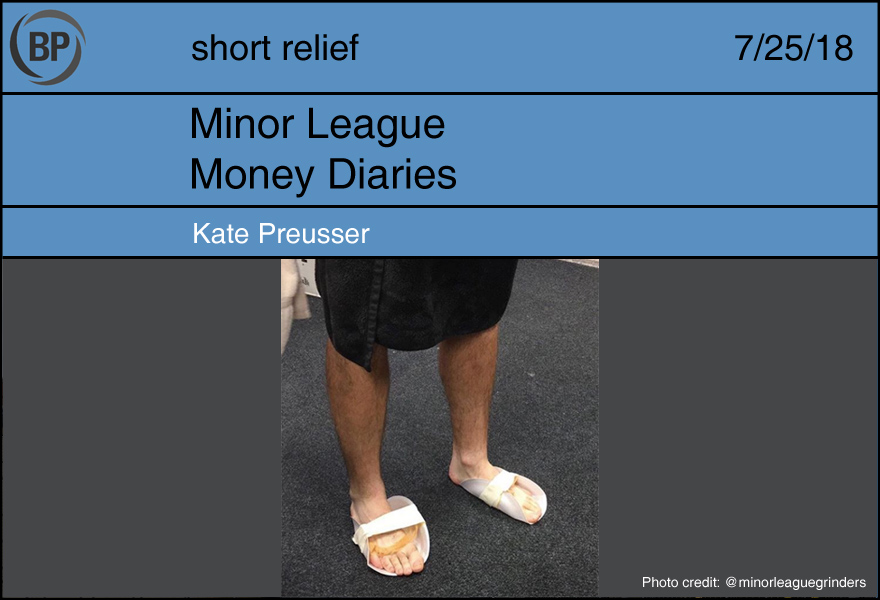 Rent: $200/month for my corner of a one-bedroom apartment I share with four other people.

Student Loan Payment: On a deferrment currently because I don’t make enough to cover the repayment. I had a scholarship in college but only enough to cover about a third of my tuition.

Health insurance: Graciously covered through my employer. Really helped out last year when I took a 95-mph fastball to the head and fractured my cheekbone.

9 AM: I work swing-shift hours, so I don’t usually wake up before the clock hits double digits. But today I have to get over to work to get some early treatment in, so I bribe one of my co-workers to drive me with the promise of some of Stockton’s finest gas station coffee ($5.54). On the way, I spot an avocado tree in someone’s yard and get my roommate to pull over. I can’t get to the tree but there are a bunch of avocados just lying there on the ground to take. I even grab a couple of oranges for breakfast. They’re only a little bruised! ($0).

10 AM: Just like other big companies, our office provides a bountiful food spread for us each day. Today there are three different bags of cornflakes, although bummer—I can’t find any bowls. Roommate and I improvise by folding some paper plates into bowls. The milk is low so we mix it with water and split what’s left, which is great because I can eat a few cookies later (we’re allowed to keep whatever we find in the park after the game), and it’s a nice bonding moment with my roomie. I eat one orange and squeeze the other for juice. Being healthy is easy! ($0).

12 PM: Lunchtime! Today the spread is some bread, a tub of peanut butter, and a few jars of jelly—a perfectly balanced meal. Some of the other guys complain that this is the fifth time in a row lunch has been PBnJ, but I point out that today it’s wheat bread, and the kind with seeds on the crust, even. I make a sandwich for later and take some bread to make avocado toast with, because I’m such a millennial, LOL. I offer to share my avocados, but no one is interested in my “sketchy roadside avocados.” Their loss! ($0).

3 PM – 11 PM: Work work work work work! One nice thing about my job is the hours are pretty flexible. I mean, I have to be there for a minimum of ten hours anyway, but I can show up as early as I want any day! I’m dragging a little after my early wake-up, so I treat myself to a soda from the machine in the hallway. Half of the time it eats your money and doesn’t give you anything, and the other half of the time you don’t get what you asked for, but that makes it exciting! I want a cola, but instead get a can of Mr. Wonderbitt’s Fizzed Onion Water. Trying new things is exciting! I’m glad I used part of my laundry budget on this! ($0.75).

Another one of my workplace’s amenities is we have showers on-site, which is pretty convenient when you live with a bunch of other guys with one bathroom, haha. Unfortunately, tonight my shower shoes break. Replacing them isn’t in the budget, but I am so lucky to have some smart co-workers, including one who majored in engineering at Georgia. Two paper plates, a roll of toilet paper and some athletic tape later, I am the proud owner of some new custom kicks. I try to Venmo him a dollar for his time but he won’t let me. My teammates are the best! I might even keep these after the check rolls in! [Update: I just looked at my banking app, and I will need to keep these for at least another week. But you know what they say, classic fashion never goes out of style!]

Home to my air mattress for sleep time. Well, it’s not an air mattress so much as it is a pool float shaped like a unicorn, but I think it brings me sweet dreams!

Total spent: $6.29. A pretty spendy day for me—I’ll have to tighten my belt over the rest of the week. But sometimes you just have to splurge and treat yourself!