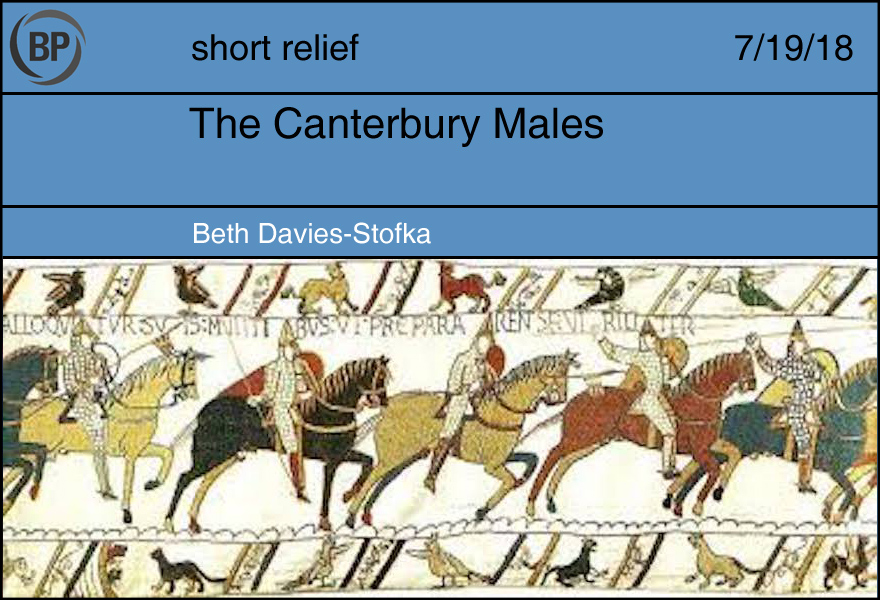 From a fragment discovered in the dust of the Vatican library:

Hostilities ceased annually for four days. One of those days was set aside for celebration and spectacle, when combatants gathered for friendly competition to the cheers of the common people. Lancers rode out onto a bright green field, gaily garbed in white and grey pajamas adorned with brilliant colors; a glorified circus of stars. “We compete every day,” one was heard to say of his fellow grey-costumed knights, “but now we are all one team.”

The manuscript describes an immense screen used to magnify the pageantry for the benefit of the large crowd which had gathered for the event. From each lance, the pennon of the knight was seen to fly, boldly displaying his motto in vivid colors. Heralds read the mottos publicly over devices designed to amplify and broadcast their voices to millions not in attendance. Many of the mottos appear to have lacked imagination. The heralds frequently repeated such simple phrases as, “As Good as Anybody.”

Here is a small sample of other oft-repeated mottos recorded by scribes that day:

What a Leader I Have Been.

I Am Small. I Will Hurt You.

I Am Huge. I Will Hurt You.

Heard most often of all:

No One Has More Fun Playing the Game.

It is unknown whether the heralds faithfully read the mottos displayed on the pennons, or if they repeated the same few mottos over and over from a list they maintained separately for the event. In some circumstances, however, scribes recorded mottos so unique that they included the name of the knight. As the list is quite short, we transcribe it here in full:

Chris Sale: Not an Adonis!

Aaron Judge: I Can Handle Success.

Nolan Arenado: I Move Around a Lot.

Bryce Harper: I’m With My Dad.

One knight needed only a single word to suggest the presence of one possessing exceptional skill in the art of intimidation:

The day’s festivities lasted longer than was hoped, but the manuscript implies that this was normal for such an occasion. The battle ended when the knights in the grey pajamas outlasted those wearing white. They were seen to jump, laugh, hug, and shout, while engaging in complex dance rituals. However, when asked by the scribes how they felt, they each reverted to the same bland motto:

It’s been a tremendous honor, and I appreciate the opportunity. 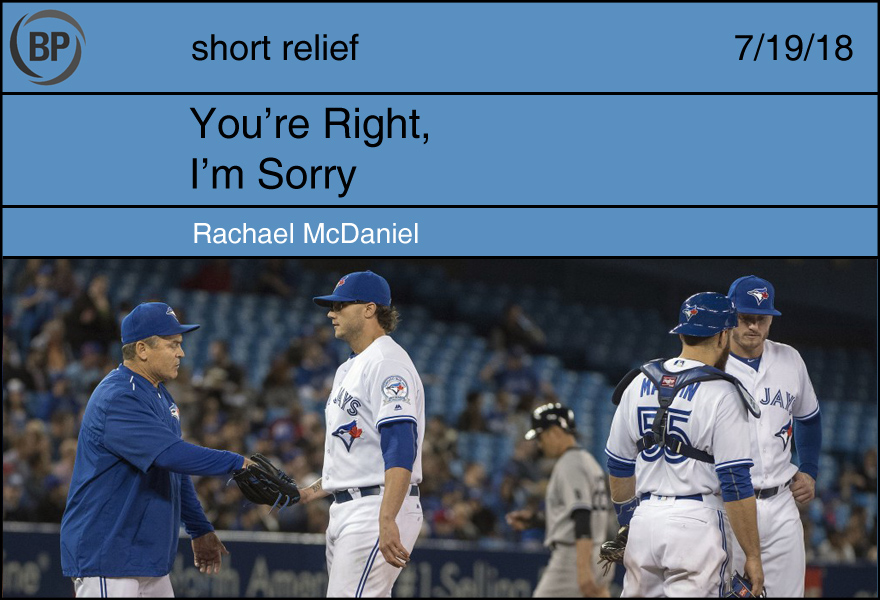 You are standing at a bus stop alone on a chilly night in April. You have your little battery-powered radio with you. Your phone is an old Blackberry on which you can’t keep track of baseball, but you keep track nonetheless: every single game, every pitch, even if it’s while you’re at school or while you’re at work. Nothing has made you as happy as baseball has for the last nine months. You need this. Right now, you are listening as Brett Cecil blows a lead for the Jays. Your phone buzzes.

Guilt. You’ve felt guilty every day since you deleted his contact information in your phone. You only stopped talking to him because you stopped talking to everyone else, too, because you hated your thoughts again, hated seeing them written down where other people could see them. In the bad days you used to get really high and take your phone apart and hide the pieces in corners of your closet and in old backpacks so that you wouldn’t be able to find them in the morning. So that no one could talk to you, and you couldn’t talk to them, even if you wanted to.

But the bad days are over, as you have told yourself so many times. You don’t have to use drugs to sabotage yourself anymore. You can just do it, disassemble yourself into pieces and pack them away, fully aware of your actions and their consequences. And so, gradually, you stopped responding to people’s messages. Every so often you come back with an excuse, and the closer you get to the truth, the lamer it sounds. I’ve been really busy turns into I’ve been going through some stuff turns into Sorry, I just can’t. I just can’t. I’m sorry. I just can’t. Especially not with him. You remember how much he scared you, and you remember everything he said, and you’re still scared. After all this time — you hate that you’re still scared.

He is begging you talk to him. He’s desperate. He’s dying. He needs some kind of distraction — anything, literally anything, but it has to be from you. He asks what you’re doing. For the first time in months, you text back. You say you’re just waiting for the bus, and you’re listening to the Jays game, and Cecil is blowing another lead. You wait for what seems like forever for a response. You refresh the conversation over and over until there’s a new message. He says that sports are stupid, for stupid people.

You don’t know how to respond to that. So you say what you’ve always said: You’re right, I’m sorry. And he is right, you think. He always is when it comes to you, or at least so overwhelmingly conclusive. What kind of person uses baseball, of all things, to forget how terrible they are? Your eyes burn. You can’t think of anything else worth saying.

The Jays lose the game. A month later, when they’re doing better, you run into him on the bus. You have a short, rigid conversation and spend the remainder of the 40-minute bus ride in silence. You can’t think of anything else worth saying. When he gets off the bus he doesn’t say goodbye. That was the last time you talked to him.

You need to be logged in to comment. Login or Subscribe
ebsalo
I've only recently discovered Short Relief. I'm glad there is a place for this.