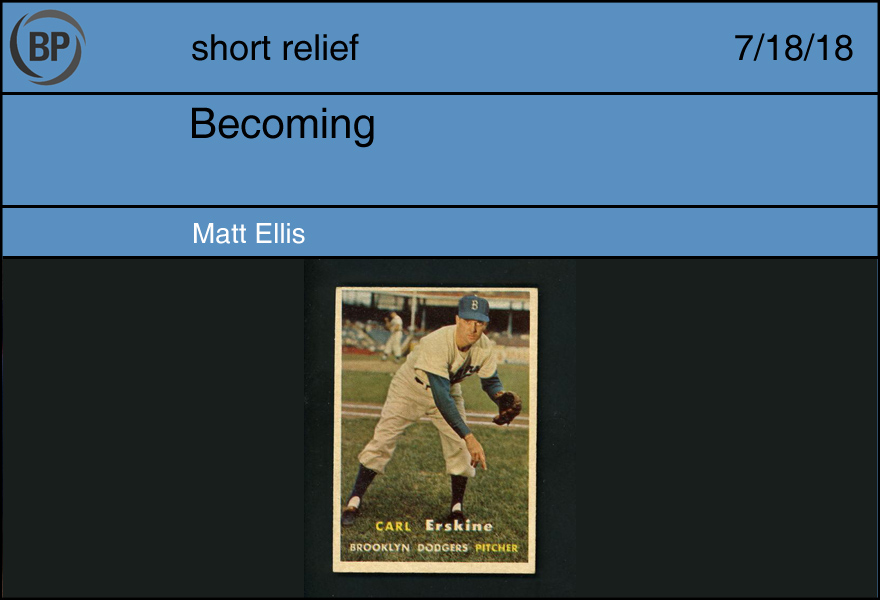 It was hot, and he was beginning to notice the sweat pooling up in that little spot on the bottom of his back, sealed into the wool sack with a leather band around his waist. He had torn through the top of the order in the first with a series of fly balls, wearing only 12 pitches on his right arm as he stood on the mound to face Kluszewski, slugging .642. Two pitches, some nerves later, an out.

Were he not trained for this, he might be thinking back to Game Three from last fall’s series, that 14-strikeout masterpiece that nevertheless failed to bring a ring to his left hand. The Midsummer Classic. Perhaps the no-hitter in his breakout season. But it was September 16th and they were 4.5 games back, each second ballooning in importance from the last as contingency gave way to history, pitch by pitch.

When Kluszewski returned in the third they were down, 2-1, and trouble was brewing. Gus Bell had just plopped a 1-1 cutter into center, and he realized the game was creaking at the seams, ready to explode. The sweat wasn’t helping. First, he thought, he could establish the outside corner of the plate, maybe make him reach for it a little bit. But Kluszewski was a statue, waiting for what he wanted to see.

Soon the ball was screaming in the clouds as if to demand, no, to call into being a 4-1 lead for Cincinnati but it began to fall, fall under the weight of its aspirations only to land in the glove of Duke Snider, his foot hugging the wall. And in that moment, Carl Erskine took a deep breath, knowing all too well he was trapped between two becomings—one which brought with it a foreclosure, the other mere possibility that they could keep this going for another day. Then, it would all reset.

Eventually, one became. But not on that day, alone on the mound under the lazy shadows of late summer. No, it was almost as if he realized that day that history is not merely written, that it is torn out of the nothingness of what could be to be made real with each and every passing breath. The inconsequential giving way to new epochs, the vital to hiccups.

Later he would give up some runs and get pulled from the game, leading to a five-game losing streak that cemented their early vacation that season. Or, he would get out of the jam and toss seven clean on Tuesday. Unlike us, either were alive to him, there, on the afternoon of Thursday, September 16th, 1954. The only thing real to him was that damned pool of sweat. 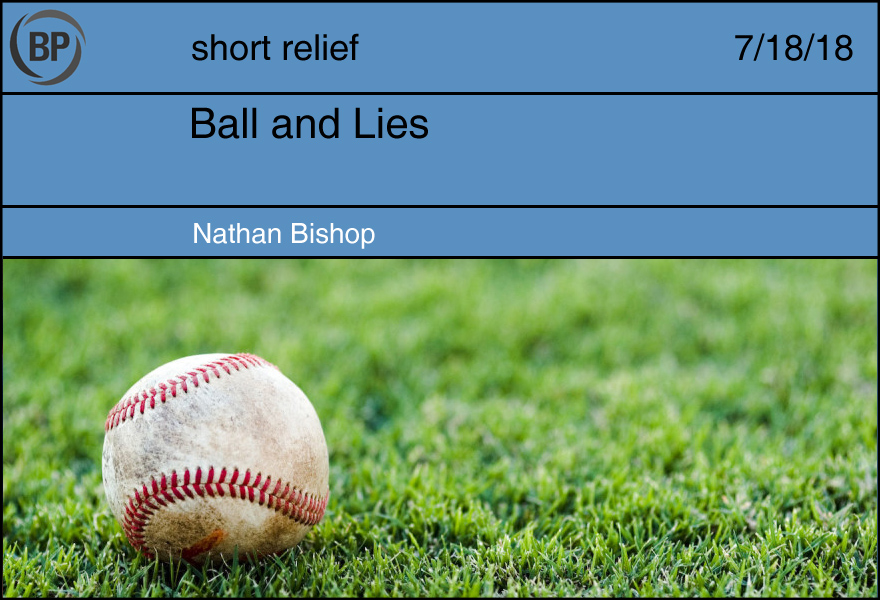 The ball was hit on a line into the right-centerfield gap. The center fielder ran as fast, jumped as high, and reached as far as he could. Almost perfectly parallel with the earth, his outstretched glove intercepted the ball, and they both collapsed in a heap on the ground, together. In the tumult, the ground pried the ball loose from the center fielder’s glove and it rolled about six inches away.

This happened out of the view of the umpire, and the center fielder had a choice. He could hurry the throw in, and make clear his failure. Or, he could play it cool, and casually get up and throw the ball in with a swagger that indicated he damn well had caught that ball. It was, it should be noted, the championship game of the tournament.

The center fielder chose the path of deception, or, depending on your view, salesmanship. The umpire signalled out, and the crowd roared. The other team’s fans, graced with the view the umpire was not, fumed and railed about injustice. The poor umpire simply stood helplessly as the opposing manager, informed by his fans’ ire, stormed out to berate him for his incompetence. The centerfielder put his glove to his mouth to conceal a guilty grin.

I was that center fielder, almost 25 years ago. We won the game, and the championship, by a single run. We stormed the field. We got trophies. Our small-town newspaper showered us with praise. It was, at the time, maybe the highlight of my life. It was maybe the first time I had chosen so obviously and publicly to lie, and gotten away with it. It was even caught on camera, and my dad went and hounded whomever had it for a copy, which he spent the rest of my childhood showing to various guests and visitors. It made him very happy.

My mother was ashamed, and said that I was a liar. She hated that tape.