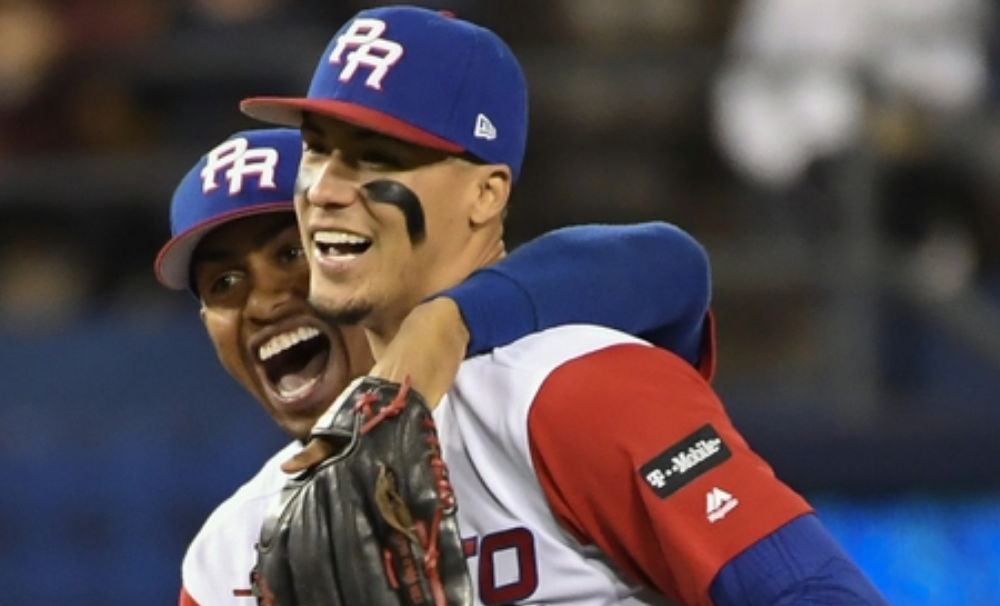 Javier Baez took part in last night’s Home Run Derby and tonight he’ll take the field as the starting second baseman for the National League in the All-Star game. Francisco Lindor will start at shortstop for the American League. As the game unfolds, it’s possible we’ll see Jose Berrios, Joe Jimenez, and Edwin Diaz all take the mound for the AL squad, and it’s likely that Yadier Molina will catch the later innings for the NL.

If that happens, it will make 2018 the first season since 2001 in which six players hailing from Puerto Rico play in the Midsummer Classic. Even that undersells this moment, though. In 2001, the six Puerto Rican All-Stars were:

This year’s set is much, much younger. Molina turned 36 years old last week, but of the rest, Baez is the oldest, at 25. Jimenez is the youngest, at 23. Relative to the early 2000s (or even any time in the 1990s), MLB is a sport dominated by youth, and these six stars reflect that nicely. It’s also worth noting that the group could be even larger. Only the roster rules for the All-Star game (each team being represented, for instance) and injuries kept Minnesota’s Eddie Rosario and Houston’s Carlos Correa from joining the AL squad. Rosario is 26; Correa is 23. Somewhere just below the level of All-Star recognition lurks Enrique Hernandez, who is also 26.

Neither volume nor aggregate youth is the real story here, though. The story is who these guys are, and just how good they really are, and what their emergence might mean for the future of MLB, Puerto Rican baseball, and the island itself.

Baez has become one of baseball’s most popular, marketable, and dynamic players, and looks poised to become the first player ever to hit 30 home runs and steal 30 bases in a season during which he played a significant number of innings at third base, shortstop, and second base. Diaz will probably set a new MLB record for one-run saves in a season, and if the Mariners keep winning games during the second half, he could even set the single-season record for saves, period. Berrios and Rosario are the shining lights in a dark season for the Twins, the two players among their young core who have emphatically reaffirmed their claim to being part of the team’s long-term plans. Lindor has emerged as the best shortstop in baseball, and maybe the most dangerous hitter at that position since Alex Rodriguez moved off of it, and if Correa were fully healthy, he’d be the biggest threat to Lindor’s primacy in that regard.

These aren’t just stars, or All-Stars. They’re superstars. They’re among the best clutch players in baseball. They do things on the field every day that most other players couldn’t do once in a career. They deliver value in ways some of the game’s other active greats can’t; they’re exceptionally athletic, versatile, and multidimensional. Baez, Lindor, Correa, and Hernandez each have one or more signature playoff plays to their name already. They’re also thoughtful with the media (accommodating English-only media very well, and proactively), well-liked in their clubhouses, and active in their communities. What many around the game desperately hope to get, someday, from the likes of Mike Trout, Bryce Harper, Corey Kluber, or Aaron Judge, these players are already providing. They’re as likeable and watchable as they are valuable. Not many current stars can make that claim.

Unearthing this many gems of such similar age from Puerto Rico has, arguably, never been so unlikely. The island’s current population is around 3.3 million, down about 500,000 from where it was at the start of the 21st century. It has about one-third as many people as the Dominican Republic, about one-tenth as many as Venezuela, and about one percent of the population of the United States. All of those nations have enjoyed uninterrupted population growth since World War II, even though that growth has slowed. Puerto Rico’s population growth turned negative right about the time of that 2001 All-Star game, and events like last year’s landfall of Hurricane Maria only make it harder to envision a reversal of that trend. The median age of Puerto Rico is just south of 37 years, which is about a decade older than that of Venezuela.

Baez and his family help tell the story of that population decline. Baez’s father, Luis, died when Javier was just 10 years old. Within two years, the family moved to Florida, and Baez taught himself English by watching television and going to middle school. Many young families are following a similar path, moving to Florida or New York rather than staying in Puerto Rico and putting down generational roots. That might be the best thing for a developing ballplayer, or it might not. It’s clear that, even at a youth level, Puerto Rico itself offers ample opportunity for young players, including the ability to play year-round and a number of high-quality baseball academies.

For a developing family, however, it’s a slam dunk. A disturbing number of Americans can’t find Puerto Rico on a map, but if they could, they’d find themselves pointing to an island due East of the Dominican Republic, some 1,031 miles from Miami, less protected from violent Caribbean storms than any other major population center in the region. Maria was an unusually, catastrophically strong hurricane, of course, but the island being battered by some storm of nearly that magnitude was all but inevitable. If Puerto Rico is to be a viable, self-sustaining place for people to live over the next century, there will need to be major investments—in infrastructure, in economic modernization, and especially, in shielding the island from the effects of global climate change.

None of those major measures seem possible right now. In fact, none seem possible at any point in the foreseeable future. The UN Special Committee on Decolonization classified the relationship between the U.S. and Puerto Rico as colonial in 1978, and has not changed that stance. A 2016 report from that committee urged the U.S. to expedite the process of providing Puerto Rico with self-determination. As has been frequently noted, there’s a significant divide among the people of Puerto Rico on the issue of whether to maintain the status quo, seek statehood, or push for full independence, but the current state of affairs (in which Puerto Rico is considered an unincorporated territory and is essentially dependent upon the U.S. federal government for numerous things vital to sovereign governance) seems more untenable with each passing day.

According to most scholars, the majority of Puerto Rican people consider themselves culturally distinct and separate from Americans. The natural resolution to this relationship would seem to be independence, based both on that reality and on the current state of political affairs in the States, both fiscal and social. Before that could be responsibly done, however, the island would need a boost in aid to address the many, severe problems they still face in the wake of Maria, and to deal with what figures to be new damage and disruption created by this year’s hurricane season.

For now, then, families continue to move away from Puerto Rico. It’s just a more stable existence elsewhere. The population continues to shrink and age, and the federal government continues to drop the ball with regard to its responsibility to help the island recover. These issues continue to be largely ignored, not only because of the other, closer-to-home maelstroms (literal and figurative) with which Stateside politicians are forever dealing, but because it’s been an easy issue for those politicians and their constituents to ignore, for years.

Maybe, even without pressing to do so, this group of young Puerto Rican superstars can change that. They’re charismatic, beloved, and smart. They’re going to be around for a decade yet to come, and eventually a few of them are probably going to enter the Hall of Fame. They have at their disposal a media machine and a political climate that will encourage them to speak more than their forebears were thus encouraged. They have a mentor, in Molina, who has been fostering the growth and development of many of these guys since they teamed up (along with Carlos Beltran, among others) for the 2017 World Baseball Classic. They have financial power, already, and they figure to end up with more of that than any previous generation of Puerto Rican ballplayers.

Most importantly, however, they have something else: our attention. The longer they hold it, the better off baseball, MLB, and Puerto Rico itself are likely to be.