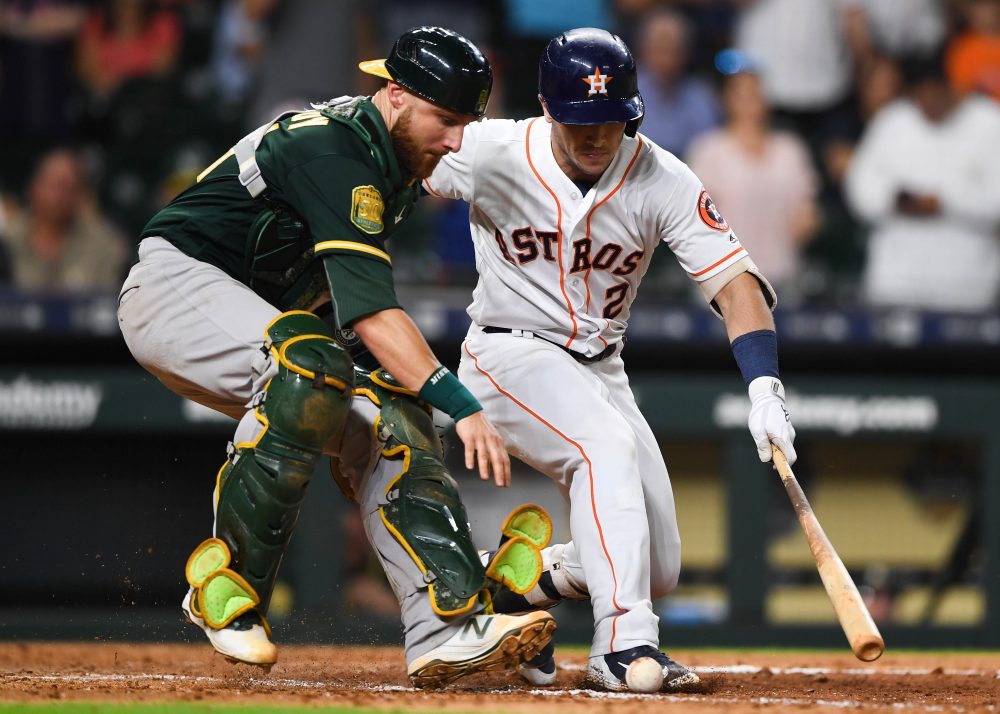 The Tuesday Takeaway
When did the American League West become the most compelling division in the league?

The Houston Astros and Oakland Athletics continued their showdown series on Tuesday, a matchup between the defending World Series champions and maybe best team in baseball (it’s either them or Boston, if we’re being honest), and one of the hottest teams in baseball trying to force the AL Wild Card race to become a lot more interesting than it looked. And it lived up to the billing, with a crazy ninth-inning rally and one of the weirdest endings to a game you might ever see.

Let’s back up a minute, though. Oakland came into Tuesday’s game winners of 11 of their last 13, including three straight all on the road against the Indians and these Astros. Houston ace Justin Verlander was on the mound and looked every bit the part of the ace he’s been all season, even if the A’s made him work for it.

Justin Verlander threw 110 pitches in six innings. The A's fouled off 33 of his pitches. Sixteen were two-strike pitches.

Still, he left the mound with a goose egg on the scoreboard and a four-run lead, which seemed pretty safe. You don’t get to 30 games above .500 if you’re blowing late four-run leads all that often. But Oakland had other plans.

The A’s strung four straight singles off Ken Giles and Hector Rondon to open the ninth, and after a pair of strikeouts made it seem the Astros were going to escape, Marcus Semien’s two out double sent it into extras. In extras, Stephen Piscotty put Oakland ahead with a solo home run before Houston’s heroics/lucky fortune.

Oh, more happened, too. Bob Melvin got ejected in the fourth inning for arguing balls and strikes, and the guy with the game-winning, five-foot putt for birdie, Alex Bregman, also hit two home runs.

Despite the loss, the A’s have very clearly made themselves a player in a Wild Card race that seemed to feature only the Mariners and whoever loses out between the Red Sox and Yankees.

Quick Hits From Tuesday
Everyone wants Manny Machado. You may have heard? It’s true. Do a Google search of his name, click the “News” tag, and on the first page alone you see links to articles mentioning the Phillies, Dodgers, Brewers, Red Sox, Cubs, and Yankees. Oh, the Yankees.

Both of Machado’s blasts tied the game, and in the ninth the Yankees decided enough was enough, intentionally walking him before Jonathan Schoop sent Baltimore home winners with a walk-off single. The Orioles don’t win very often, but when they do, their star shortstop who’s probably going to be wearing a different uniform pretty soon usually has something to do with it.

For eight innings, it was easy breezing for the Cleveland Indians against the cross-state Cincinnati Reds. Their All-Star, Trevor Bauer, cruised through all eight, striking out 12 and allowing just three hits and four walks. Two more of their All-Stars, Francisco Lindor and Jose Ramirez, hit solo homers in the first in what seemed to be the deciding runs of the game. And then something weird — maybe not as weird as what went down in Houston — happened.

Cleveland’s bullpen has been a mess all season long, but surely Cody Allen, a solid late-inning reliever for going on five years now, could get three outs before giving up four runs. Right?

A HBP, a single, another single, a double, an intentional walk, and an unintentional walk later, Terry Francona had seen enough. Someone else needed to get the final out of a suddenly one-run game. But who?

Why Dan Otero instead of Oliver Perez in the ninth? Terry Francona told Carl Willis to call for “OP” on the bullpen phone. Willis thought he said “OT.” When Otero entered, Francona was surprised.

Can’t make this stuff up.

Instead of the lefty-destroying lefty, Francona got the opposite of that. And Joey Votto made him pay.

Maybe next time, Francona will call him by his name.

The Red Sox have now won eight straight, easily dispatching of the Rangers 8-4 behind the strength of Xander Bogaerts and maybe-All-Star Andrew Benintendi.

Eight straight wins is worth highlighting, so apologies to the Red Sox for bumping them down because of the craziness in Houston and Cleveland, as well as Manny Mania. I mean, Chris Sale didn’t even pitch and J.D. Martinez didn’t even homer. Mookie Betts only had two hits. Call me when something interesting happens!

It only seems like, oh, a little more than three months ago that Philadelphia Phillies fans were calling for Gabe Kapler’s head after his first game as a manager. It’s now July 11 and, by golly, the Phillies are in first place!

Their second straight win was thanks in part to the debuting Enyel De Los Santos, who you can read about here, who bested another debuting pitcher in the Mets’ Drew Gagnon. He didn’t get a Call-Up report because, well, he’s 28 and who cares? (Sorry, Drew).

Also, the Mets are resorting to trying to cheat to win.

What To Watch For Wednesday
The Red Sox will try to win their ninth straight game in a battle of former White Sox greats as Chris Sale takes the mound against Bartolo Colon in a nationally-televised game. Round 3 of Oakland vs. Houston features Chris Bassitt taking on Lance McCullers Jr. And the FIRST PLACE Philadelphia Phillies will look to stay there against the Mets and their All-Star, Jacob deGrom.

You need to be logged in to comment. Login or Subscribe
tearecrules
Alex Bregman drove in Kyle Tucker for that win. Remember when the Astros were the dumbest and worst-managed team in baseball because of the Brady Aiken debacle?
Reply to tearecrules