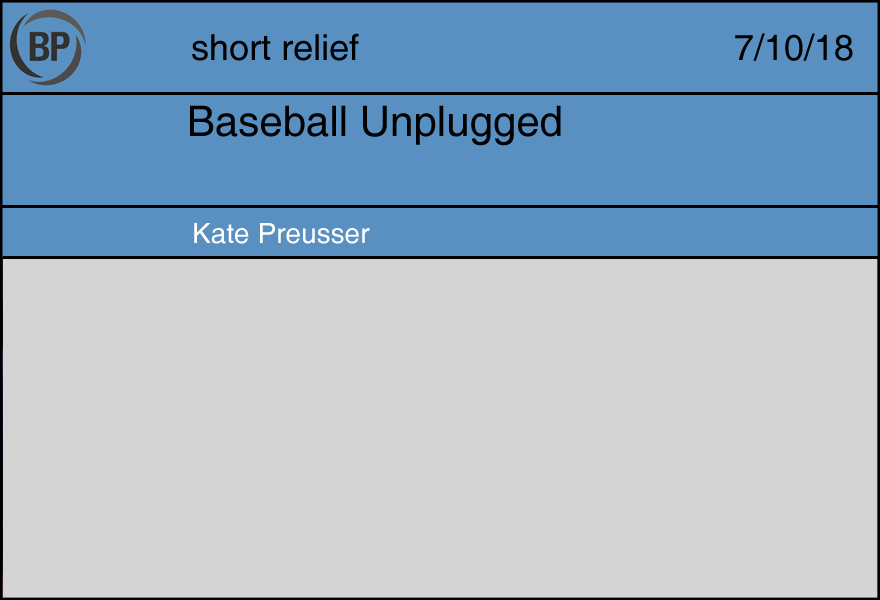 On Monday night, the Lake Elsinore Storm, the High-A team of the Padres, did their annual “Nothing Night.” On the junior-junior-junior-junior circuit of the low minors, teams try to draw interest with a series of increasingly outlandish promotions, name changes, wild food items, and one-off jerseys that riff on seemingly every pop-culture phenomenon and ’90s TV show (still waiting for some Baseball Twitter-savvy team to do “Frasier” night with Seattle skyline jerseys and a scrambled-egg-salad food special). In a way, the Storm’s “Nothing Night” non-promotion pushes the promo saturation to its absolute limit, until it collapses in on itself like a stellar black hole full of Spongebob jerseys and foods that treat donuts as a structural element.

On “Nothing Night,” there are no tickets—fans show up and sit where they want. It’s a little like a Spring Training game on the back fields, but without even having to pay for parking. There’s no mascot, no video board, no PA announcements, no in-game entertainment, no giveaways. Fans are allowed to bring their own food and non-alcoholic drinks, although in recent years the team has grudgingly opened both concession stands and restrooms (!) as the popularity of “Nothing Night” has grown. There’s no performance of the National Anthem; fans choose a moment and spontaneously sing their own version, like a patriotic version of the wave, or that scene at the beginning of Harry Potter when everyone sings the school song to their own tune.

“Nothing Night” is designed to appeal to baseball purists, those who see Brandiose as a scourge on the industry and the MiLB food bot as chillingly accurate. Especially around the hullaballoo of the All-Star Break, there is an appeal to an austere, stripped-down aesthetic; call it “acoustic baseball.” That might be more accurate than “Nothing Night” because, of course, baseball is a something and not a nothing, and even nothing is a thing, some have argued: a noun, a not-thing, an absence, a gap. Renaissance painters understood how to paint with nothing, the chiaroscuro of light and dark, using nothingness to point up somethingness.

Listening to Lake Elsinore take on Inland Empire (no TV feed, obviously) with no walk-up music, no cartoon strikeout effect ka-donging, no fans yelling for the beer batter, things do sound different: the crack of the bat is sharper, the thump of the ball hitting the catcher’s mitt more resonant, the Let’s-go-Storm chants more distinct. The between-inning breaks are the most noticeable difference, when the announcer falls silent and the only noise is the murmur of the crowd. In fact, it’s an incredibly soothing white noise, a feeling akin to falling asleep as a kid while there’s a party going on downstairs, that balance of knowing people are close by, but being allowed to float above it all on a little cloud. It’s not quite nothing, but not enough to be something. 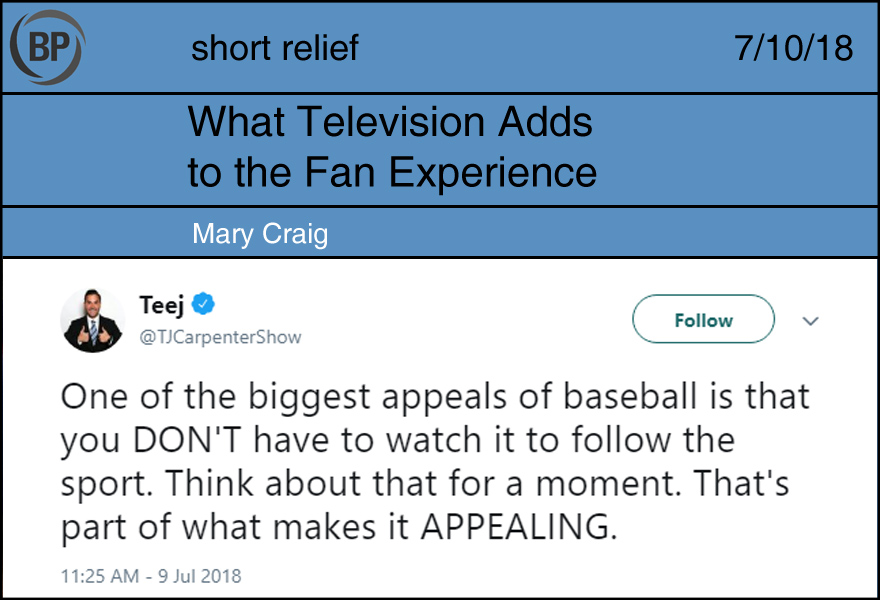 After the first MLB game was televised—a May 21, 1939 affair between Brooklyn and Cincinnati—the Radio Corporation of America declared the intent of doing so was to “bring [the fan] the events [they] cannot attend in person” while maintaining the “element of suspense” inherent in viewing the game from the stands. While many enthusiastically supported this new method of consuming baseball, staunch radio-listeners objected. Televised games turned experiencing baseball into a strict regimen, removing the leisure, warmth, and freedom associated with listening via the radio, they argued. To watch on a television, one was forced to be indoors, viewing only what the camera operators deemed important. The foundation of their argument, however, was that television was novel and for the masses, and therefore bad.

But television, largely unlike radio, is capable of great innovation. Now there are multiple camera angles that show any desired area of the stadium and portable television devices that make televised baseball just as accessible as radio broadcasts. This development of technology has in turn created new avenues for understanding the game and the players. No longer are we reliant on second-hand accounts of events, the capriciousness of connotation. We can form conclusions based on evidence readily available to us. We can watch players react to circumstances in real time, gauge their interactions with one another, and come to learn more things than would otherwise be the case.

For instance, a fan listening to Saturday’s game between the Dodgers and the Angels would know the events that took place during the game. The announcers could convey a portion of the ridiculousness that was Cody Bellinger’s trip around the bases during the sixth inning and the listeners could likely imagine the broader context. But lost to them is Bellinger’s wry smile as he laid on the infield after being called out at third. 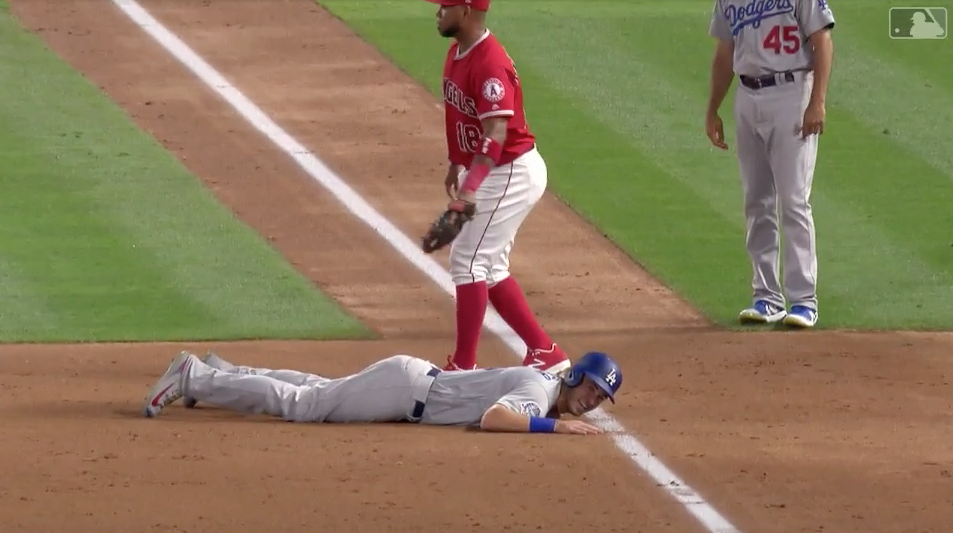 Lost to them is the fact that Bellinger’s incredulous smile carried over into the dugout, while his teammates remained stoic if not slightly judgmental. 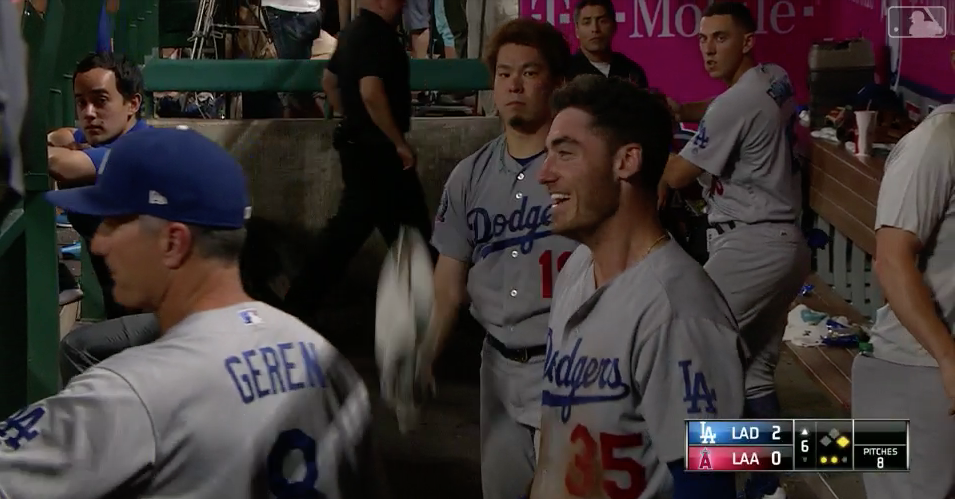 Following along via the radio or Gameday or reading the recaps is perfectly adequate and quite probably preferable for a sect of the population for a variety of reasons. But watching the games on television, being drawn into places even the stands cannot offer, opens one to the minute particularities and joys of each game that become increasingly necessary as the season grinds. Seeing Cody Bellinger’s reaction to this series of mishaps reminds one of the humanity of the game and enables us to more easily move beyond the player listed on the statsheet. This is likely an unintended product of the expansion of baseball, but it remains true to the primary objectives of the first broadcasts of 1939.