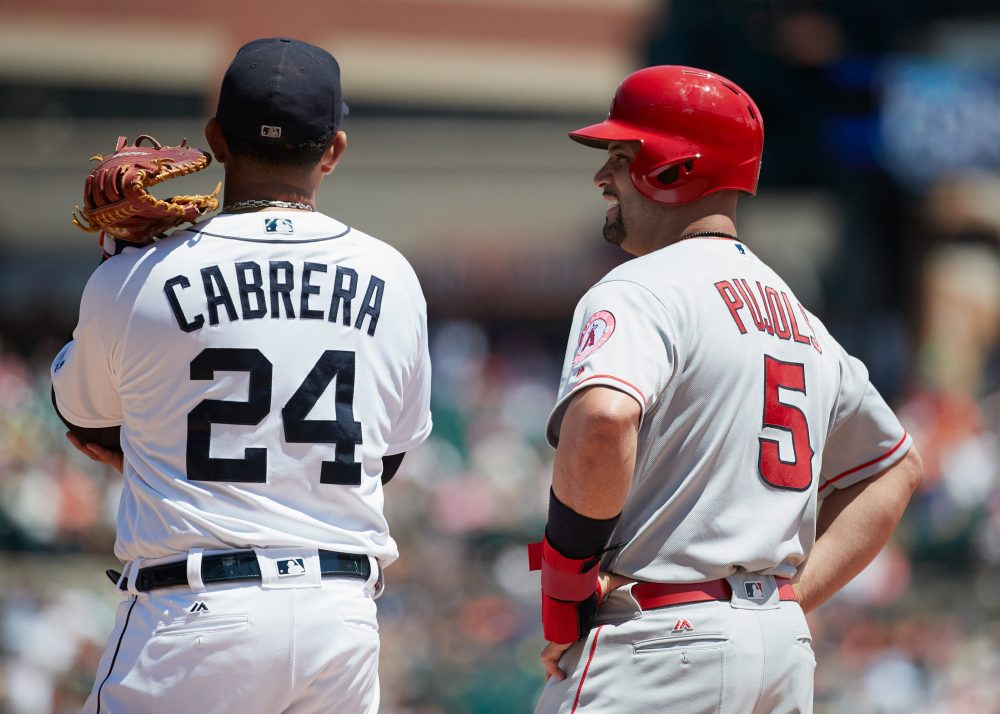 Don’t worry, this is not another article about All-Star “snubs.” I reached my personal lifetime quota for that a long time ago. However, in looking over this year’s All-Star rosters, the talent gap at first base between the two leagues stood out to me, so I decided to dig a little deeper.

Freddie Freeman, a three-time All-Star who’s been one of the best hitters in baseball for the past decade or so, was voted the National League’s starting first baseman. His backups are the same duo as the NL’s backups last season: Joey Votto, a six-time All-Star and former MVP, and Paul Goldschmidt, a six-time All-Star and two-time MVP runner-up. Three established stars having very good seasons, and three obviously worthy All-Stars.

There are also three first basemen among the NL’s five “final vote” candidates: Jesus Aguilar, who leads the league in homers, slugging percentage, and OPS; Max Muncy, who would be leading the league in slugging percentage and OPS if he had about 25 more plate appearances; and Brandon Belt, a former All-Star and consistently very good first baseman having a career-year at age 30.

All six of those NL first basemen meet any sort of reasonable standard for All-Stars—Freeman, Votto, and Goldschmidt are established stars having very good seasons, Aguilar and Muncy are having monster first halves in their first seasons as full-time players, and Belt is a very good veteran having a very good first half. It’s an embarrassment of riches, and that doesn’t include Cody Bellinger, who made the All-Star team as a rookie last season and still has 17 homers with an .807 OPS even in a down sophomore campaign, or Anthony Rizzo, a three-time All-Star having a poor season at age 28.

Meanwhile, the American League’s voted-in starter is Jose Abreu, whose 12 homers and .762 OPS are both lower than the marks of seven of the eight NL first basemen mentioned above. Don’t get me wrong, Abreu is a solid player. But he hasn’t been an All-Star since his rookie season in 2014, his current .259/.315/.448 slash line is the worst of his career in all three categories, and he’s been worth a grand total of just 1.0 WARP. He falls below the typical standard for an All-Star first basemen, let alone a starter.

Abreu’s lone backup is Mitch Moreland, a 32-year-old who came into this season as a zero-time All-Star and lifetime .252/.317/.439 hitter. Moreland is having a good first half, hitting .283/.353/.517, but even his .870 OPS is lower than that of Muncy, Aguilar, Freeman, Goldschmidt, and Belt. It’s safe to say Moreland has never really been anyone’s idea of an All-Star first baseman, and by the time this season is over there’s a pretty good chance his numbers won’t look like an All-Star first baseman’s numbers.

And yet, there weren’t better options. Moreland has the highest OPS among the 25 American Leaguers with at least 25 games at first base. Miguel Cabrera is second with an .843 OPS and would have been a natural pick, both because he’d be the Tigers’ lone representative and because, like Votto and Goldschmidt, he’s an established star having a very good season … except he’s out for the year with a ruptured biceps tendon. Justin Smoak, the AL’s starting first baseman last year, has the third-best OPS at .812. No other first baseman in the entire league—including Abreu—has an OPS above .800.

On the position’s OPS leaderboard, Moreland, Cabrera, and Smoak are followed by C.J. Cron, Matt Olson, Yulieski Gurriel, John Hicks, Yonder Alonso, and Ronald Guzman (and then Abreu). One-time stars Albert Pujols and Joe Mauer are way down the list. Or, put another way: Brandon Belt would be the king of AL first basemen, both in terms of the first half he’s having and in terms of his career track record. In the NL, he’s probably the sixth option. All of which is borne out in the position’s league-wide numbers.

Naturally, that made me curious about how bad this current crop of AL first basemen is, historically. It turns out, really bad. Here, via the indispensable Baseball-Reference Play Index, are the lowest OPS+ by any league’s first basemen since 1908. 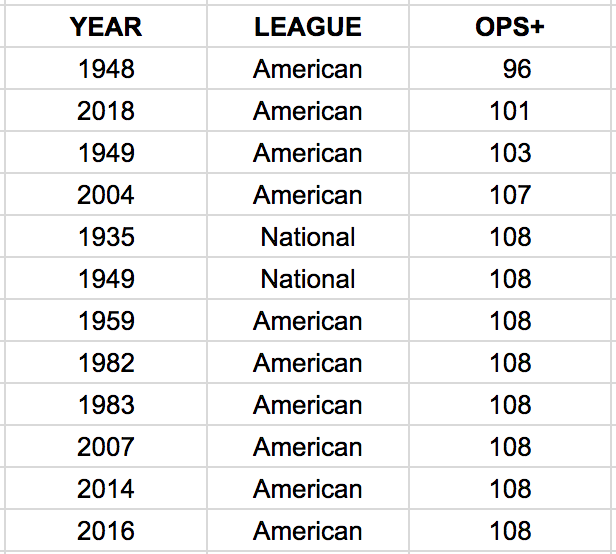 On the other hand, the NL’s collective 124 OPS+ at the position this season is fairly typical all time, ranking tied for 51st among 188 total league seasons since 1908. They’re very good, but not amazing. In fact, NL first basemen had a higher OPS+ last season and in 2015. However, last time AL first basemen topped a 124 OPS+ was 2001, led by Jason Giambi, Jim Thome, Carlos Delgado, Fred McGriff, and Rafael Palmeiro.

The fact that it’s been 17 years since AL first basemen were as productive as NL first basemen have been in three of the past four seasons seems to suggest that the presence of the designated hitter is removing some of the best-hitting first basemen from the mix. And that makes sense, logically, as many of the best-hitting first basemen are also the worst fielders, and in the AL those guys are DHs—David Ortiz, Edgar Martinez, Frank Thomas, Jim Thome, Jason Giambi, Travis Hafner, and Edwin Encarnacion are some prominent examples who mostly manned the DH spot because it was an option for their teams.

That doesn’t really explain this year’s situation, though. J.D. Martinez was voted the AL’s starting DH and he’s having a spectacular season, but if forced to play a position full time he’d be in the outfield. Same for Nelson Cruz, the AL’s backup DH. Shin-Soo Choo, Giancarlo Stanton, and Khris Davis, too. And those are the best hitters who’ve seen extensive action at DH this season.

In general, DHs tend to hit much worse than first basemen because a) the DH spot gets used to give partial rest to non-elite hitters, b) DH becomes home to former stars on their last legs, and c) there’s typically been a DH “penalty” linked to only hitting during a game. As a group, AL designated hitters have not topped a 115 OPS+ since … ever. They’ve posted a 114 OPS+ twice and a 112 OPS+ three times. So not only has the NL been consistently out-producing the AL at first base, the AL isn’t even getting much additional production from their one advantage, the DH spot.

Explaining that seems trickier, particularly given that the AL has long been perceived as the slugging league thanks largely to an extra non-pitcher in the lineup. One theory is that NL teams know they only have room for one slugger lacking the range and/or arm to play in an outfield corner or elsewhere in the infield, so they choose their first basemen wisely and make sure the bat being played there is truly a big plus. AL teams know they have room for two range-challenged sluggers, and so they actually end up lowering the bar for both positions. Or maybe no “theory” is really required, and we’re just seeing the cyclical nature of something like this.

The old guard of AL first basemen led by Miguel Cabrera, Albert Pujols, Mark Teixeira, Prince Fielder, Justin Morneau, and Paul Konerko got, well, old, and there was no new guard to take their place. During the past three seasons, six AL first basemen have been chosen as All-Stars: Cabrera, Smoak, Abreu, Moreland, Alonso, Eric Hosmer. Good players, certainly, and in Cabrera’s case a future Hall of Famer, but an underwhelming lot. This year, in addition to poor league-wide production from the position, the AL’s only 25-and-under players to see even semi-regular action at first base are Matt Olson, Joey Gallo, Greg Bird, and Ronald Guzman. It’s a position dominated by 30-somethings and they simply aren’t producing.

That can change relatively quickly, though. As noted above, the worst-hitting first basemen of all time belonged to the AL in 1948 and 1949. However, in 1950 they were back to a solid 116 OPS+, and in 1952 they posted a 128 OPS+ that the league has topped just three times since. Maybe by 2022 the AL will again have some star first basemen. The seeds for that haven’t been planted yet, but it doesn’t take much imagination to envision some combination of, say, an outfielder like Aaron Judge or Giancarlo Stanton shifting to first base, a standout NL first baseman switching leagues, Bryce Harper playing some first base after signing with an AL team, and a prospect like Vladimir Guerrero Jr. or Eloy Jimenez winding up there long term. In the meantime, if you see Brandon Belt, give him a hug.