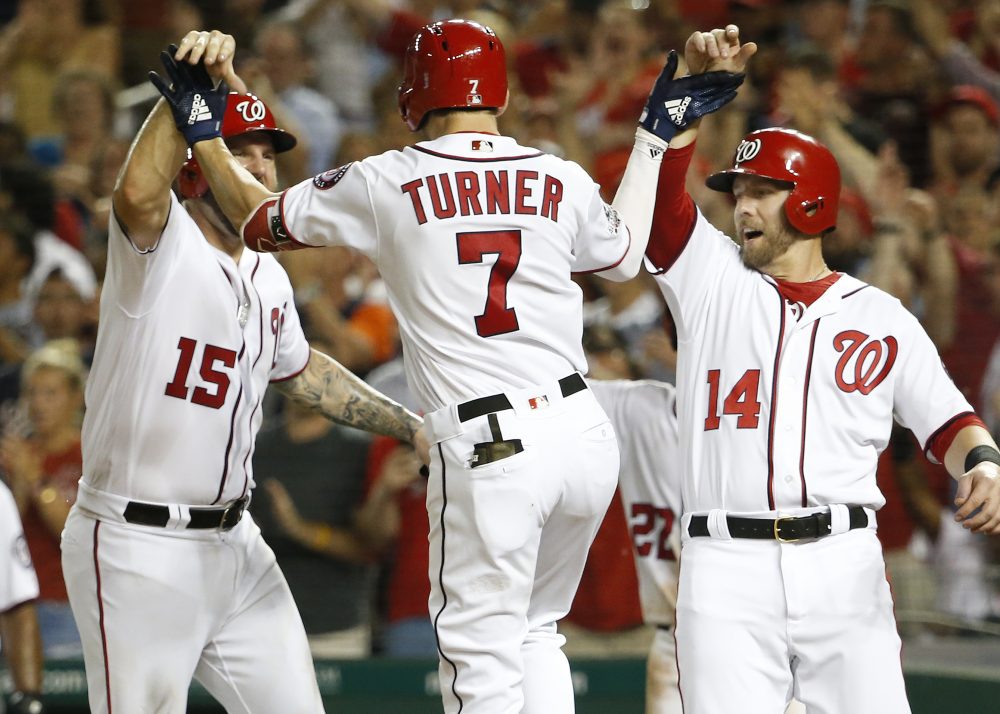 While you were busy scarfing down hot dogs and risking life and limb shooting fireworks into the sky, the Washington Nationals were having a rough go of it. They got swept by the Red Sox in front of their home crowd and the sense of urgency became real enough that the team decided to call a players-only meeting immediately after the game.

It’s tough to nail down what the value of a players meeting is. Sometimes it results in a team going on a tear and sometimes it results in whatever grievances were aired during the meeting going in one ear and out of the other as if it never happened—and the struggles continue. While you can’t judge the effect after one night, the early stages of Washington’s first game after the meeting seemed negative.

That’s because the Nationals spotted the Marlins nine runs. By the bottom of the fourth inning, the 36-52 Marlins were in prime position to pull the Nationals even further down into the Under .500 Club. A three-run dinger from Martin Prado broke it open and Justin Bour’s two-run shot was seemingly the nail in the coffin.

Martín brought the pop for his own welcome back party. Nats Park supplied the music. #JuntosMiami pic.twitter.com/nmHCBaOfy5

However, the tiny embers of a comeback were born in the very next frame when Trea Turner hit a solo homer to at least put the Nats on the board. The Nats added four more runs in the fifth to turn the embers into a flame.

Turner wasn’t done, though. In fact, he was about to unleash a torrent of pain upon Miami in the next inning. A sacrifice fly from Daniel Murphy brought the Nats within three runs, and later, Turner came up to bat as the potential go-ahead run with the bases loaded. Sure enough, Turner cashed himself in as the go-ahead run with what had to have been the loudest grand slam in the history of Nationals Park.

Amazingly, the Nationals weren’t done with their deluge of offense as they added three more runs in the seventh inning. So if you’re following along at home, the Nationals were down by nine and then proceeded to drop 14 runs on Miami’s head over four consecutive innings. To Miami’s credit, they didn’t just fall away after seeing their nine-run lead transform into a five-run deficit. Brian Anderson hit a three-run shot to bring Miami to within two runs and make things interesting.

.@Marlins Brian Anderson launches a 3-run homer to bring the Marlins within 2 of a crazy shootout of a game, 14-12! Catch all of the action on FOX Sports Florida. #JuntosMiami pic.twitter.com/kXTXhAIomp

In the ninth, Starlin Castro hit a single to bring the go-ahead run to the plate in the form of Derek Dietrich. After the single, the Nats had another team meeting — this time it was just a mound visit and this time we saw immediate results of a meeting. Sean Doolittle struck out Dietrich on three pitches and the Nationals had their best win of the season under their belt.

It’ll go down as just one win in the standings but if this snowballs into a mid-season revival for the Nationals, then maybe we’ll look back on this night in early July as the start of a grand resurrection for Washington.

ELIAS notes via @SlangsOnSports re: crazy Nats comeback: Teams entered tonight 0-103 when trailing by 9+ runs at any point in a game this season. Entering tonight, MIA had just 1 game in franchise history they lost after leading by 9+ runs: on July 4, 2008 against the Rockies.

For a while there, it sure looked like the White Sox were actually about to get one over on the Astros. A two-run sixth inning and a solo home run from Leury Garcia in the eighth pushed Chicago ahead of the juggernaut.

Leury Garcia puts one in the bullpen! He puts the #WhiteSox up 3-2 in the 8th. pic.twitter.com/HG3eCe8dV1

Unfortunately for the Pale Hose, their moment of glory was snatched away from them as arguably the best offense in baseball returned to their senses in the bottom of the ninth. Not only did the Astros tie it, Yulieski Gurriel went ahead and won it for them without having to go to extras.

WITH THE GAME ON THE LINE AND A SWING AS SMOOTH AS SILK.#VoteYuli ➡ https://t.co/C9XSBgkLJz pic.twitter.com/p9M4ybCDnU

St. Louis made easy work of the Giants with an 11-2 victory and the star of the show was Luke Weaver. For the five innings, it seemed like everybody on the East Coast would have a reason to stay up late as Weaver actually had a perfect game going. He lost both the perfect game and the shutout in the sixth after giving up an infield single and a homer, but that didn’t stop him from finishing with seven strikeouts and just two hits allowed over eight innings.

Meanwhile, Harrison Bader had himself a night at the plate as he was only a triple away from completing the cycle. He didn’t get there but his night was emblematic of what was a great night all-around for St. Louis.

He’s a triple shy of the cycle. #STLCards

After dropping a series at Yankee Stadium, the Braves had no time to dwell on what happened in the Bronx, and instead they had to focus on taking on another first-place team in the form of the Milwaukee Brewers. At the start, it seemed like Ender Inciarte and Ozzie Albies were ready to put the immediate past behind them.

Less than four hours to send @ozzie to DC. Get on it, Braves Country!#OzzieAllStar: https://t.co/4jdlPuLVEu pic.twitter.com/Uxsbr0IlFy

Once Hernan Perez smacked one off of the batter’s eye in center field, it was 7-2 Brewers and Milwaukee was on their way to a very comfortable victory.

Hernán Pérez hit this 2-run HR off Winkler in the 8th to give the Brewers a little extra insurance. pic.twitter.com/fWKa6fo8yO

Seattle beat the Angels 4-1 but that scoreline could have been a lot closer if it weren’t for Dee Gordon pulling off a spectacular catch in the top of the eighth inning. Ian Kinsler hit a broken bat looper that seemed destined for the outfield until Flash Gordon put on the costume and saved the day.

Last Friday, I suggested that you all take a look at the Oakland/Cleveland series that was going on since the two teams were actually very close in record, if not in their placement in their respective divisions. In fact, the A’s ended up taking it to the Tribe as they took two out of three before getting blown out 15-3 in the final game.

Now it’s time to see if Oakland can keep it up or if the final game of that series was an omen of things to come in this series rematch. Friday’s opener will also mark the return of Carlos Carrasco (3.62 DRA, 89 cFIP), who has to be thrilled that he gets to take on one of the best offenses in the AL. So much for a soft re-launch!