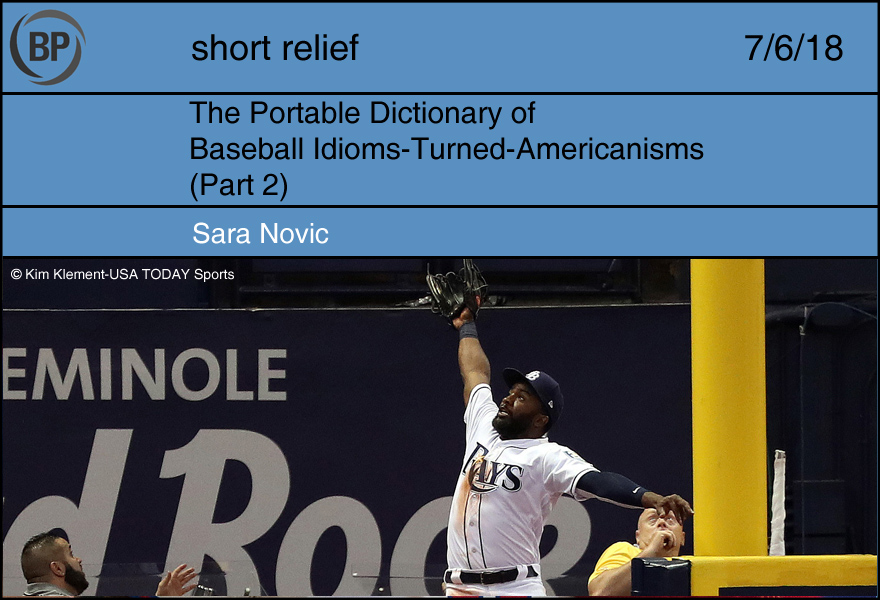 Baseball has always positioned itself as the All-American pastime, tying itself to our nature’s culture. But even I (writer, baseball enthusiast, nerd) hadn’t realized how much baseball has shaped American English. Part 1 of this list appears here. And a few more follow:

In baseball: To hit a ball such that it cannot be retrieved (usually into the stands or out of the stadium), so the batter can round all four bases and score

At large: 1. To be a huge success; to perform beyond expectation; see hit it out of the park

At large: Something esoteric or technical, a detailed discussion that dissects a topic to a minute level. Often the phrase carries a connotation that the discussion is boring or at least overly technical, as it goes over the heads of the general public

In baseball: In reference to a player removing his foot from the base, and thus being in danger of being tagged out

At large: on the wrong track; off the beaten path

Out in left field

In baseball: Baseball parks are not standard in size; however, in most baseball parks, the left-field line and wall are more distant than the right, no doubt because the majority of players are right-handed

At large: To be eccentric, unusual, daydreaming, or zoned-out; to come “out of nowhere.” Origins may be rooted in greater cultural anti-left-handed bias

Out of one’s league

In baseball: When a player’s skills are not at the level of those on his or the opposing team, e.g. a rookie struggling in the Majors

At large: someone who is in over one’s head, often referencing an attempt to date someone perceived as more attractive or otherwise superior; to out-kick one’s coverage

In baseball: In baseball lore, the phrase is supposedly used by umpires to signal the start or resumption of a game. According to umpire school rules, however, umpires are only supposed to yell “play”

At large: To cooperate; to initiate action

In baseball: Initially developed for an indoor version of the game, softballs were designed to get less spring off the bat—as such, they’re larger than baseballs and have softer cores

At large: to “play softball” or “throw softballs” suggest that something is easy or dumbed down; in journalism and politics, softball questions are generally uncontroversial

In baseball: The number of strikes (misses, or fouls for strike one and two) a batter has made in his turn. At three, he strikes out.

At large: 1. Someone with “strikes against them” has likely been given chances and failed to improve or succeed at a given task

In baseball: To fail to get a hit after some combination of foul balls and missed swings.

In baseball: To land on a base and be called safe, or to tag up when the opposing team is seeking an out

At large: To get into contact; to check-in, esp. in corporate-speak 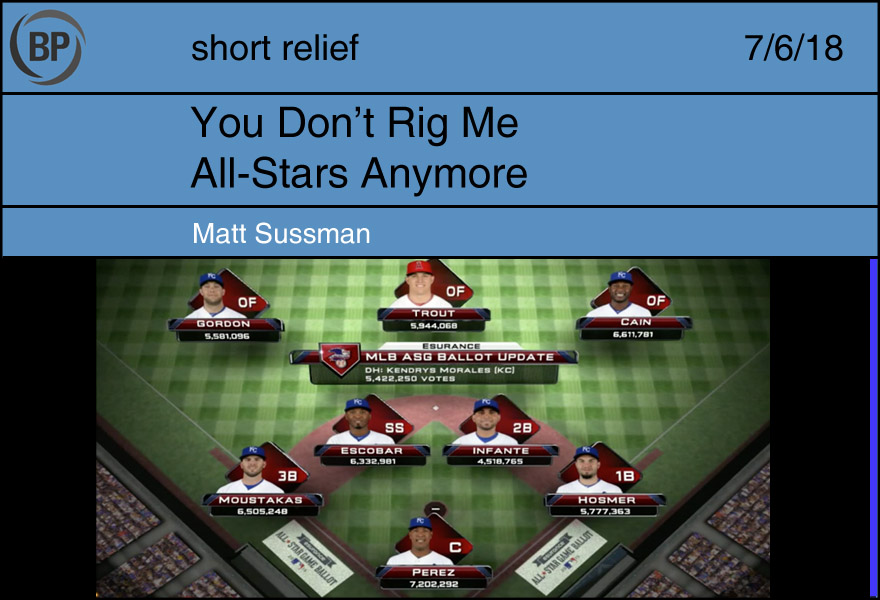 The movement to get Omar Infante into the All-Star Game feels like a century ago, back when vote-meddling was still harmless. The year was 2015. Internet usage was being dominated by quirky emotional bots known as “humans.” A dress couldn’t figure out what color it was. Same with Rachel Dolezal. And a .230 hitter with zero home runs was winning all the precincts at the polls over Jose flippin’ Altuve in the American League. This was understandable; they were the only two second baseman in the league. The other 13 teams just put a carrot underneath a propped-up box in the second-base hole, which was all you needed in the pre-shift era. This brought the vote-leaders to eight Royals and Mike Trout, the ultimate “who says no” trade. Astros fans ultimately did the right thing, realizing that tanking the vote had no sabermetric value.

This year we have none of that nonsense. All the playoff-likely teams are extremely normal save for the Mariners, but while Seattleites vote in droves, they usually deliver ballots via hot-air balloon and are thus not counted until August. We could have collectively made a push for Chris Davis to be a starter, even though it would have been long and needlessly exerted, just like Chris Davis. Maybe there’s just so much going on that a simple ruse like baseball-voting chicanery doesn’t seem worth it. Maybe the voters have finally learned to sort the position players by WAR and take the bias out of it.

This was our last gambit to push silliness into an actual baseball outcome. We no longer want to do it. Now all we have left are the memes, and hoping one of the players sees the memes, posts the meme on their own social media, then thinks about the meme during a game. I’m not saying attendance is down because they finally fixed All-Star voting, but attendance might go less down if All-Star fan voting was done exclusively at the ballpark, with each ballpark being part of an Electoral College-style system, resulting in a 15-way tie at each position. Look, the solution is either that or a pitch clock. 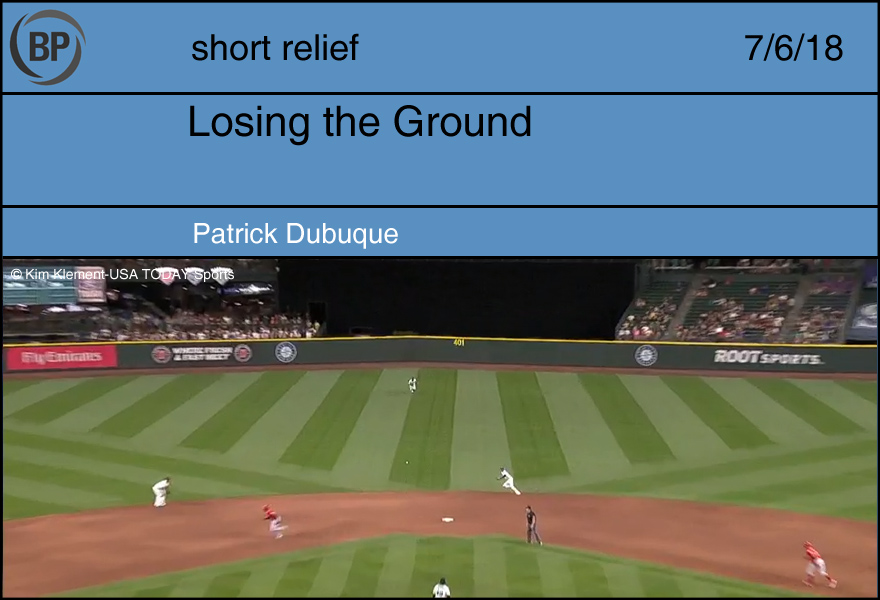 Baseball fans are consumed by the concept of greatness. It’s perfect that this generation has been bequeathed Mike Trout, because no one better symbolizes not just Hall-of-Fame talent, but also what it is that we prize in a Hall of Fame-caliber player: a man defined not by his highest heights of athletic achievement, but his highest lows. It’s Hemingway’s definition of greatness: an endless supply of pressure in need of grace, the kind every parent feels they lack. It’s a greatness we’re forced to take for granted because it persists even during the times we need to look away. But despite all that, for a schedule divided into more than hundredths, Trout is one of the few players in our capricious sport that we can count on to be Trout nearly every night, the way basketball fans can count on, say, Andre Drummond.

Last night, Trout had one of his lesser Trout games: 1 for 4, a double, three strikeouts, an Angels loss. That line, averaged out over a season, would still offer an OPS higher than many ballplayers, one of which would be Mariners second-baseman-turned-center fielder-turned-second baseman Dee Gordon. Despite the continued fortunes of the team he so closely resembles, the slap hitter is quietly struggling at the plate this season, in no small part thanks to the six walks he’s drawn in nearly 80 games. Gordon is, in several ways, the opposite of Trout: in size, demeanor, power, neck width. He is defined by his limitations, and celebrated for his ability, on occasion, to transcend them.

It’s almost a shame that this highlight is in video form, because it plays better as a series of still images, a flip book drawn on a stack of Post-it notes. Page 0:04, Alex Colome looking helplessly up as the ball sails to his right, Gordon building stride behind him on the left. Page 0:06, Gordon again, on the ground, harmless, small.

But oh, that single second in between: body horizontal, drop shadow missing, as if pasted onto the field via Photoshop; glove bent back like a second joint. One second leaping between states of energy like an excited electron, shimmering and impossible. This is why I’m drawn to baseball, and why I tend to find my affinity in players like Gordon rather than Trout, as much as I admire the latter. Especially these days, I often feel like a .232 TAv person, hacking away at every slider in the dirt. It’s okay. Every kid dreams of being Mike Trout, but now all I want is one moment of being Dee Gordon, one moment of losing the ground. That’s all.