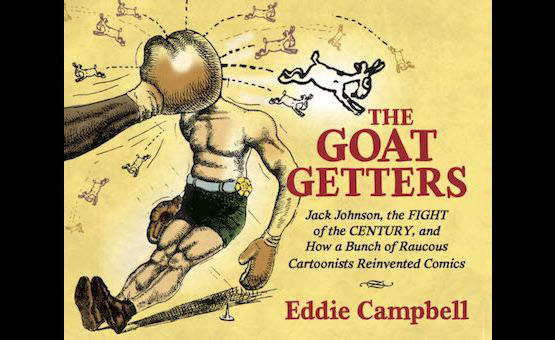 Eddie Campbell has been creating comics and graphic novels for 30 years and is perhaps best known for his collaboration with Alan Moore on From Hell, their graphic novel about Jack the Ripper. This spring, IDW released his new book about the origins of sports cartooning. The Goat Getters: Jack Johnson, the Fight of the Century, and How a Bunch of Raucous Cartoonists Reinvented Comics is a work of art that captures a lively but lost era when news was reported with paper and ink and images were drawn by hand. Campbell recently shared some cool, vintage baseball cartoons with BP and helped us put words to the joyous energy that they still engender, even after all these years.

(Note: the pitcher (above) and hitter (below) are by Robert Edgren, who, Campbell said, “was great at drawing spirited little baseball characters.” Edgren was the sports cartoonist for the NY World and the players are NY Giants.)

Baseball Prospectus: How did early 20th-century baseball cartoons come to be included in a book about the Fight of the Century?

Eddie Campbell: The Goat Getters is about the origins of sports-page cartooning, and while it focuses very much on the story of the heavyweight boxing championship, it also veers into baseball territory in several places (as well as horse racing and other sports). For example, see this cartoon about Mugsy McGraw‘s goat from 1907: 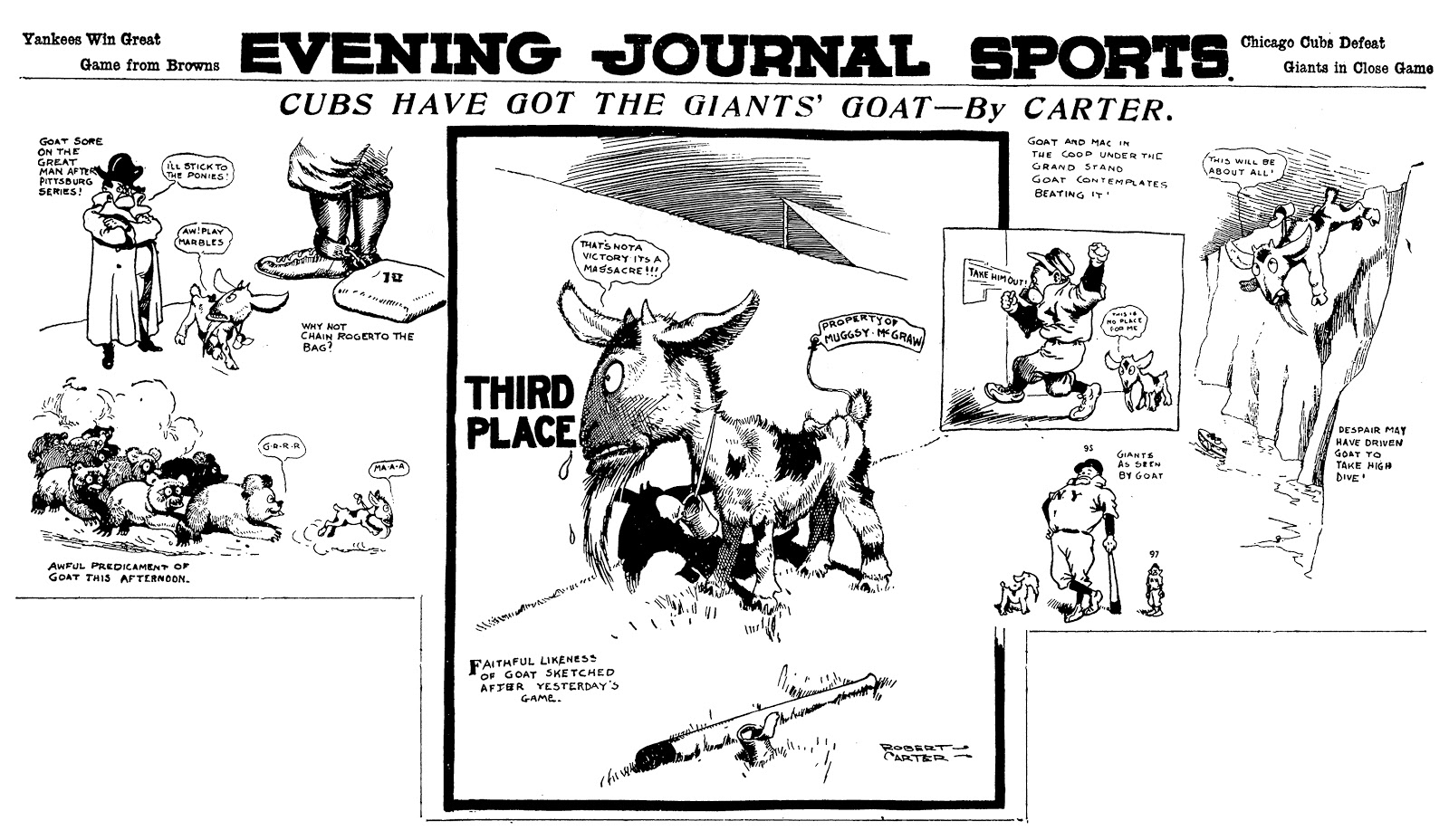 Tad Dorgan (perhaps the greatest sports cartoonist) invented the expression “gets my goat” early in the century (before 1905) in the San Francisco Bulletin. The phrase spread like wildfire, and the cartoonists liked to depict the actual goat they were getting, usually with the owner’s name on a label tied to the tail. My book has a great little clipping about the Philadelphia Inquirer getting Ty Cobb‘s goat. Here’s a picture of Ty with his (metaphorical) goat: 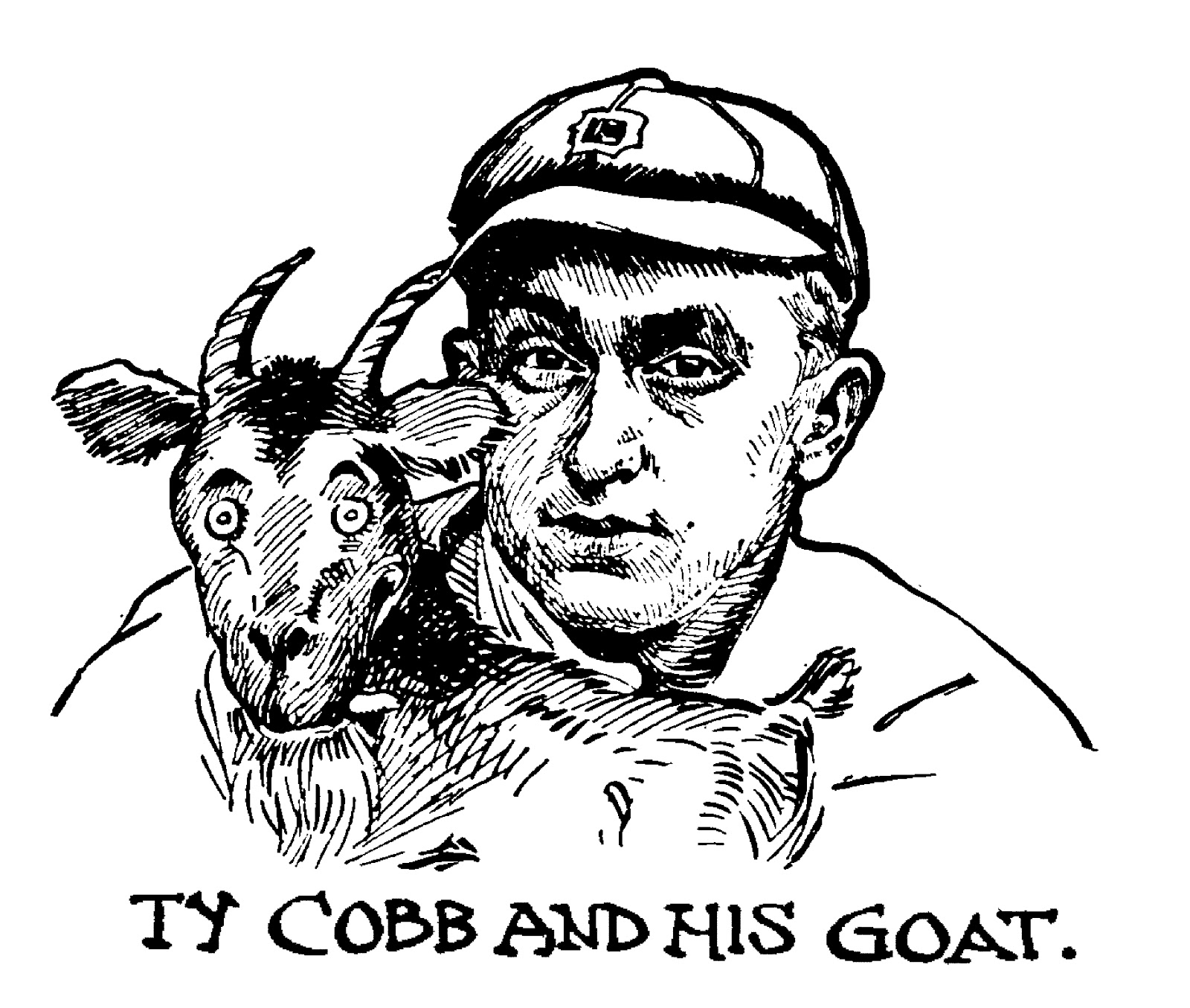 BP: I mainly knew Rube Goldberg as the cartoon inventor of absurdly complicated machines. I had no idea that he was also a sports cartoonist. Your book includes a Goldberg cartoon from October 11, 1916, when the Brooklyn Robins (a.k.a. Dodgers) beat the Boston Red Sox at home in Game 4 of the World Series—the only game in the series that they won.

EC: The Great American Cartoonist Rube Goldberg said that he “saw a man smile” in Brooklyn on October 11, 1916. “It was the first smile in sixteen years,” he said, and he caught it in a sketch. The following day that smile got wiped off when Boston won the series and Rube had to account for that too. He said, “From the present outlook it will be rather a difficult matter to put it back on again.”

BP: Were there typical stylistic features of sports cartooning in its origins?

A sports cartoon used to be a huge thing that went all the way across the newspaper page. Often there would be a photographically accurate drawing of the subject in the center, the boxer, ballplayer, runner etc. And around this there would be an assortment of loose sketches of a facetious, caricatured nature. Even Goldberg and George Herriman [better known for his comic strip Krazy Kat] used this formula, although their usual inclination was to simply be all-out funny. Herriman’s scrapping bear and tiger, representing, of course, Chicago and Detroit in the 1908 World Series, is a joy to behold. 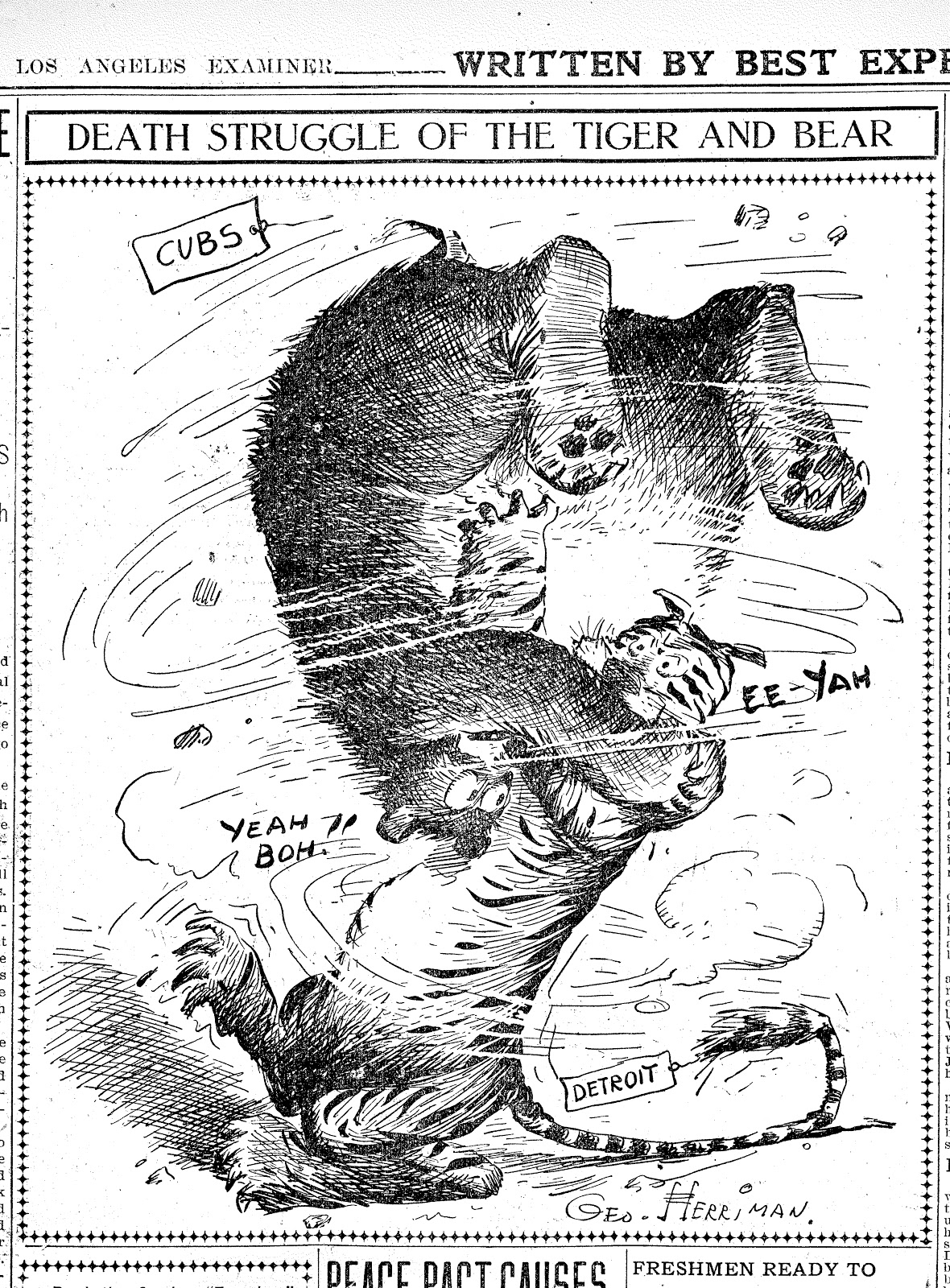 BP: What inspired your interest in sports cartooning?

EC: As a working cartoonist myself, I have for a long time been curious about the life and times of the great sports-page cartoonists who are largely forgotten: Tad Dorgan of the New York Journal and Robert Edgren of the New York World, to name the two leaders in a field that also included several artists who have become more celebrated for their later comic strip creations, such as Goldberg, Herriman, and Bud Fisher (who invented Mutt and Jeff).

It always seemed to me that there was something raffish and rough-house about them in contrast to our modern breed, including myself, who sit in front of the computer all day. They took pride in being newspaper men, and many were working before photographs could be reproduced on high-speed newspaper presses. They were ready and willing, before they were assigned the sporting beat, to rush around town getting sketches of house fires and public picnics and whatnot.

Also, on days when the sports cartoonists had no sports news to illustrate, they would lampoon something else happening in the world of celebrity, such as the long-running New York Thaw trial, or would just pester somebody endlessly for no good reason, such as Herriman’s harangue of Hen Berry, owner of the L.A. Angels baseball team [of the Pacific Coast League]. Berry used to wear a beaver-skin hat, but Herriman put out the word that it was made of weasel. In this cartoon Herriman poked fun at Elmer Koestner, who was with the Angels in 1908. Herriman was with the LA Examiner at that time, so that was his home team. 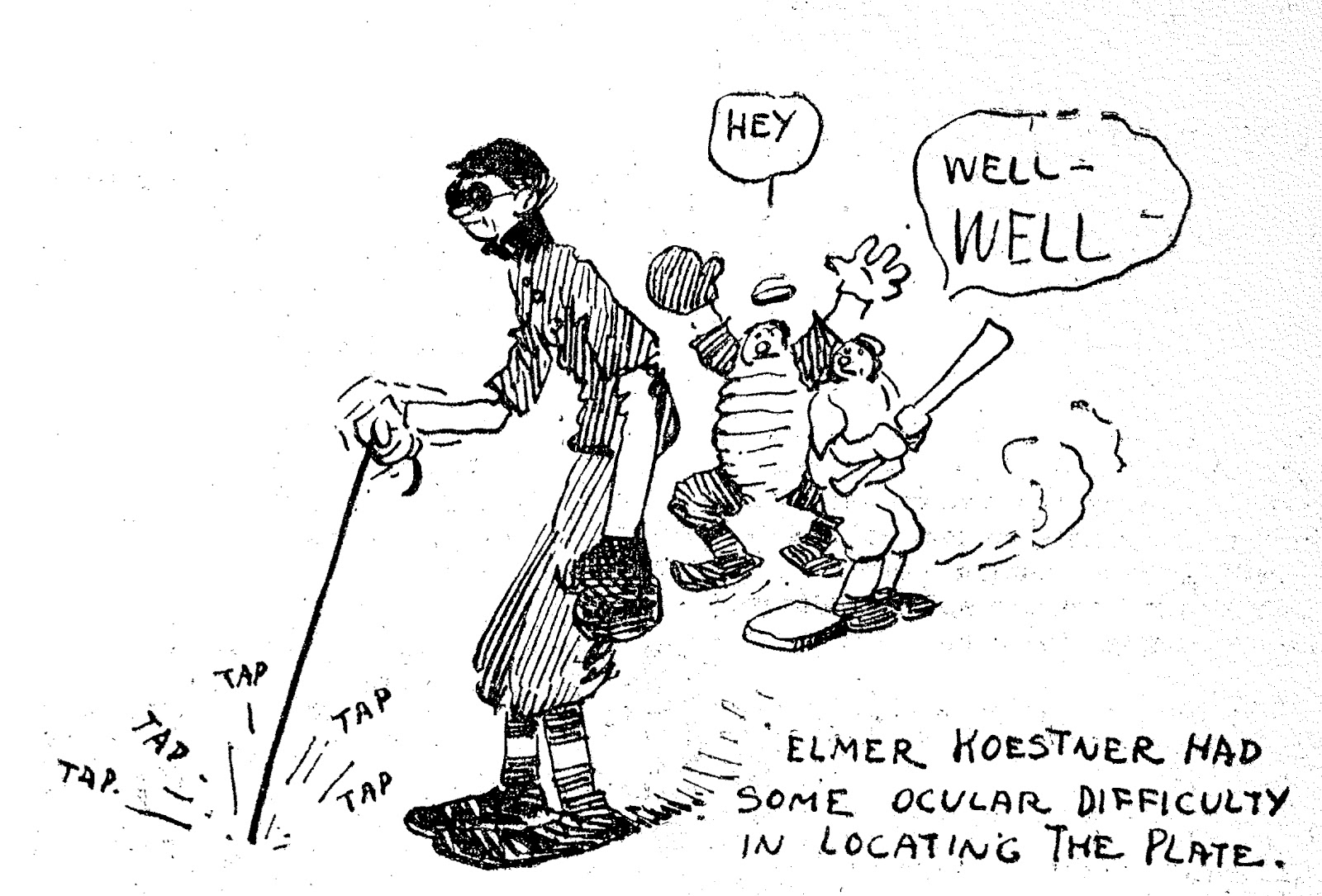 BP: The research process must have taken a lot of commitment!

EC: Finding the old things was the challenge, and often an ineffable joy, and it mostly involved breaking my eye bones by scrutinizing old microfilm in the libraries of San Francisco, New York and Chicago—then painstaking hours of cleaning and restoration to get my chosen samples as close as possible to their original appearance.

BP: Looking at these free-spirited cartoons, I wonder what the future holds.

EC: There will always be caricatures and funny drawings in the arena of the sporting world, but the classic sports cartoon, as I have described it, is a thing of the past. Now we have television—and what would we do without it?—but back then we had ragtime and Laurel and Hardy, and the best papers had a wise-ass cartoonist covering all the major events. It’s like those Ken Burns documentaries: it can be a great joy to travel back and linger awhile in the old times. That’s what my book, The Goat Getters, is all about. Mostly it covers the heavyweight boxing championship from Sullivan to Dempsey, but also baseball and horse racing, a couple of cartoons on the subject of billiards, and, of course, baseball.

Learn more about Eddie Campbell and his work at his blog. 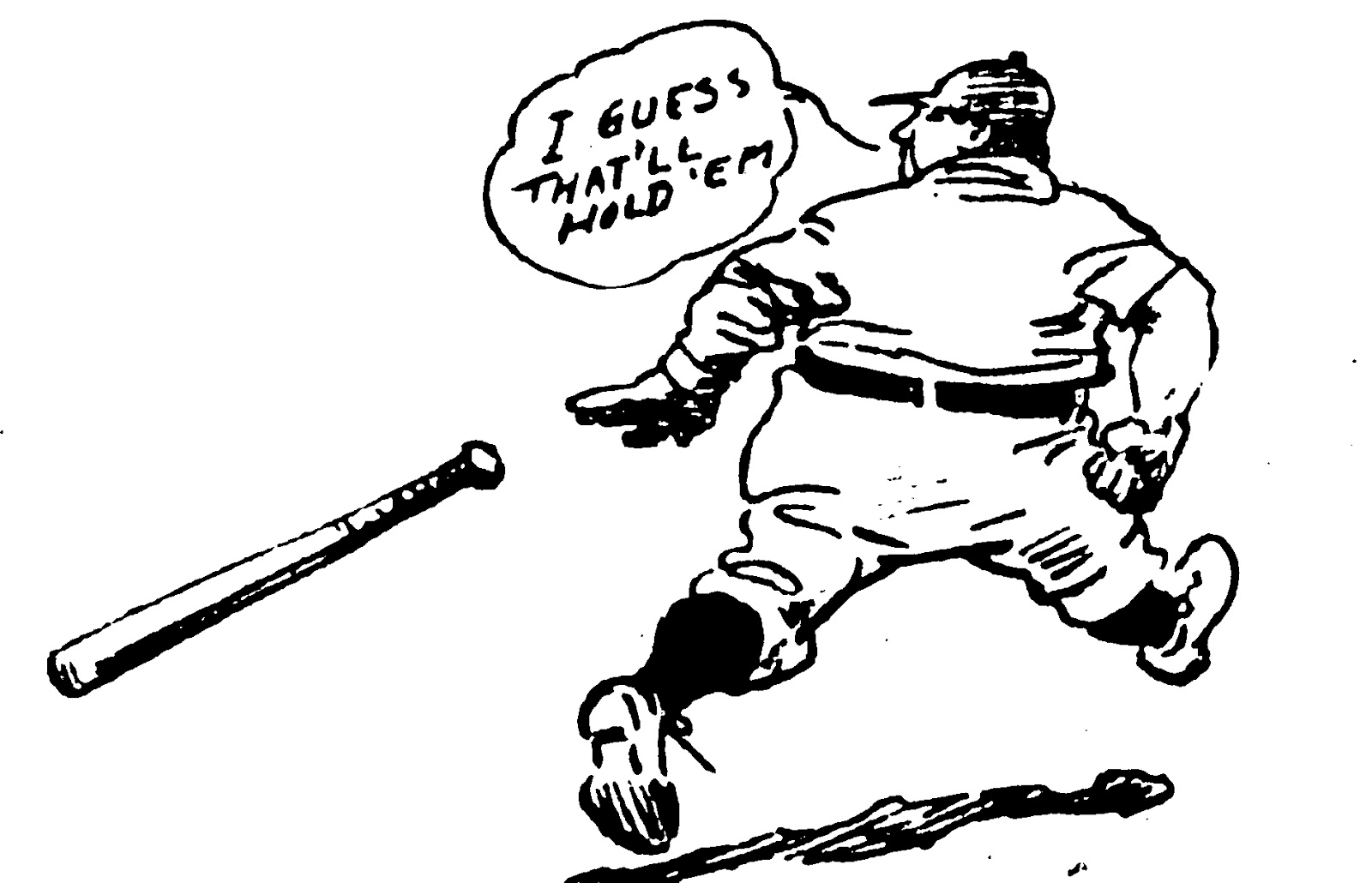