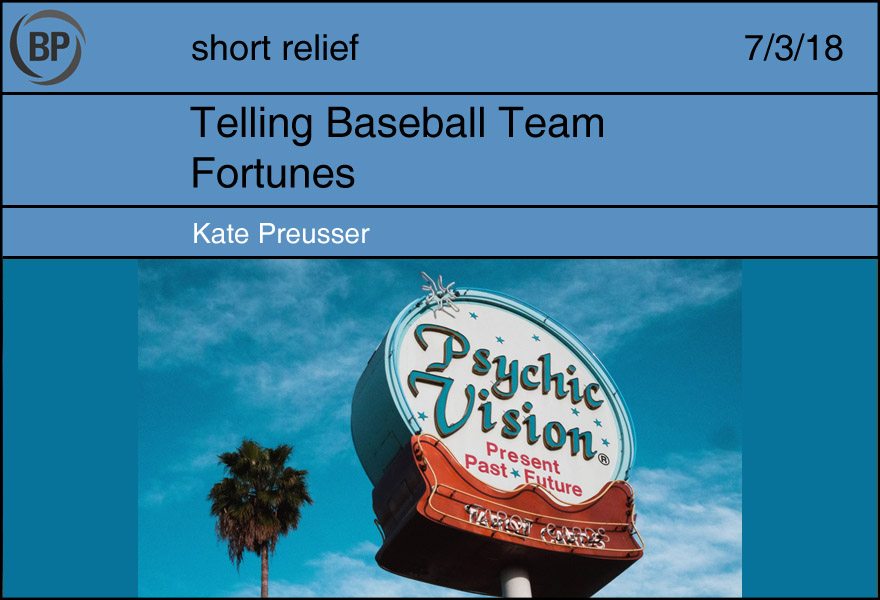 My favorite summer beach read is a nice twisty, gothic mystery set in a creepy old house, so I inhaled Ruth Ware’s The Death of Mrs. Westaway. The book uses the tarot as a motif in a way that emphasizes the symbolism and storytelling of the cards, which got me rummaging around for my old deck to see if I could maybe read some fortunes for a few baseball teams. (I determined which teams I chose by an online random-number generator because my brand of mysticism is Boolean in nature, and also, do not yell at me, Mets fans.) I used a simple three-card spread: past, present, future.

Lots of pentacles or coins in this spread, which is appropriate, because coins are the suit of fortune, or lack thereof. Beginning with the card that represents the past, the Queen of Pentacles, when upright, represents someone who is wealthy, generous, and nurturing, the matriarch who brings everyone together. Reversed, as is the case here, indicates someone who is miserly but also spendthrift—splurging where one should not, while at the same time cheaping-out on things that need time and investment. I’ll just let you chew on that one for a bit.

In the present, we have the seven of wands (or rods). Sevens are conflict cards, and in this card, specifically, a lone man stands with his staff, attempting to ward off a half-dozen unseen adversaries. It’s a threat card, a fighting card, and one that would make a lot more sense if it popped up in a spread for an AL West team. Maybe it represents the Mets and the Marlins’ race to the bottom of the NL? Unfortunately, the Page of Pentacles—who looks an awful lot like Brandon Nimmo, if we’re being honest—might keep the Mets from getting that ideal draft position.

The Pittsburgh Pirates: Queen of Wands, The Hierophant, Two of Swords (reversed)

Wands are a no-nonsense suit of action and practicality and getting things done, and the Queen of Wands is someone who is warm, funny, generous, and will absolutely light you up for acting like a fool. I don’t have definitive proof, but it feels like an Andrew McCutchen card, which makes sense, because it’s in the past position. The Hierophant is an interesting card for the present—it’s a major arcana card, which are the heavy-hitters of the tarot, and it’s an especially interesting one at that. The Hierophant is a teacher as well as a messenger, someone who has the keys but is going to make you work for them. Knowledge isn’t given, it’s earned. The Hierophant in the present position suggests that, with time and attention, understanding and growth can be achieved.

Following the Hierophant with the Two of Swords for the future should be a good sign that all systems are go—the Two of Swords, which shows a blindfolded person who nevertheless exudes confidence, represents being guided by strong intuition, taking time to make tough decisions. Unfortunately, here it’s upended, signifying chaotic thought, mental imbalance, or general freneticism. Maybe have a nice retreat in the Poconos before next season, Pirates. Spitball some ideas. Use that big chart paper. Do some trust exercises.

The New York Yankees – The Magician (reversed), the Seven of Swords, the King of Cups

The Magician is maybe the swaggiest card in the tarot deck, representing power, confidence, and self-awareness, but upside-down, that swagger transforms to arrogance, making mistakes because you refuse to listen, and just general dickery. I am re-naming the Magician “the Steinbrenner.” The sevens, remember, represent conflict, and the Seven of Swords is no different: a figure is stealing away with a passel of swords in the night. This card often represents a liar or a cheat, but in this case, might represent the need to use cunning and deceit to win a difficult battle, which seems like a pretty good description of the AL East.

The King of Cups is, according to my book, a “born manipulator, gifted at conducting negotiations, who often prefers to work in secret.” His appearance in the “future” slot of this reading seems to indicate the Yanks are planning to sign Cashman to a lifetime contract. 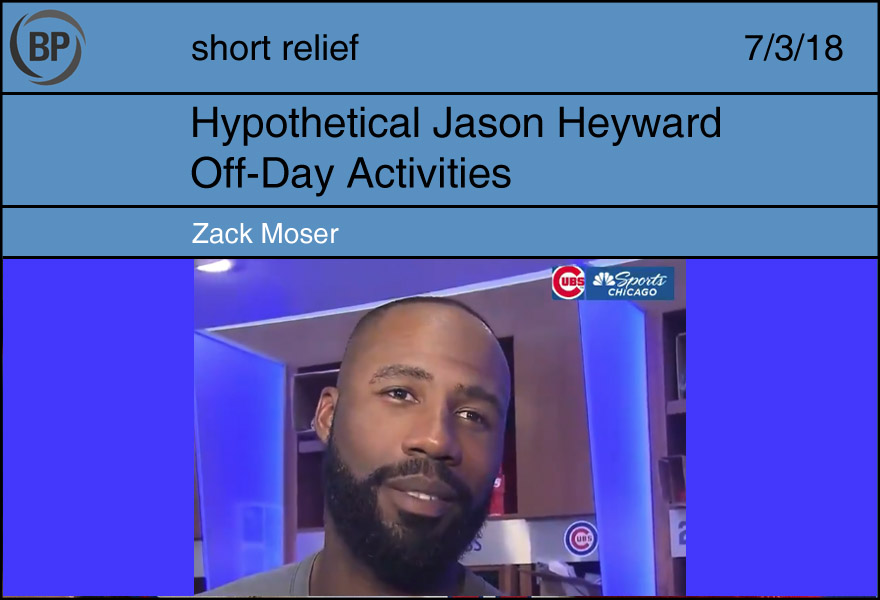 On Sunday, Jason Heyward told reporters in the Cubs clubhouse that his off-day plans were “none of [their] business,” inducing laughter among the beats. In the name of journalistic integrity, and in the spirit of Short Relief’s truth-seeking mission, I will now speculate wildly about Heyward’s off-day activities.

… watching all available episodes of Chopped on Hulu.

… sketching out some new ideas for emoji.

… shadowing one of the guides on the Chicago River architectural boat tours.

… reorganizing his impressive collection of ‘60s pop 45s by color, then “autobiographically” (he’s been hanging with John Cusack too often), then by scent.

… texting old friends to check in on how they’re doing.

… picking up Pedro Strop’s cousin at the airport.

… bidding on Funko Pops on eBay until the early hours, trying his best to score that rare Billy Ripken misprint figurine.

… speaking very softly through the glass to the fish at the Shedd Aquarium. Who’s a good fish, it’s you, yes it is!

… taking the South Bend Cubs out for a steak dinner and picking up the tab. Heyward had chicken tenders—no sauce—and water.

… changing his stats in MLB The Show so he’s 99 overall, then playing the Cardinals in a series of exhibition games and hitting home runs in every at-bat.

… re-enacting Ferris Bueller’s Day Off, but realizing far too late that the Cubs are off.

If there’s one thing I know for sure, it’s that Heyward definitely did one or several of these things, and his “none of your business” comment carried no innuendo whatsoever.