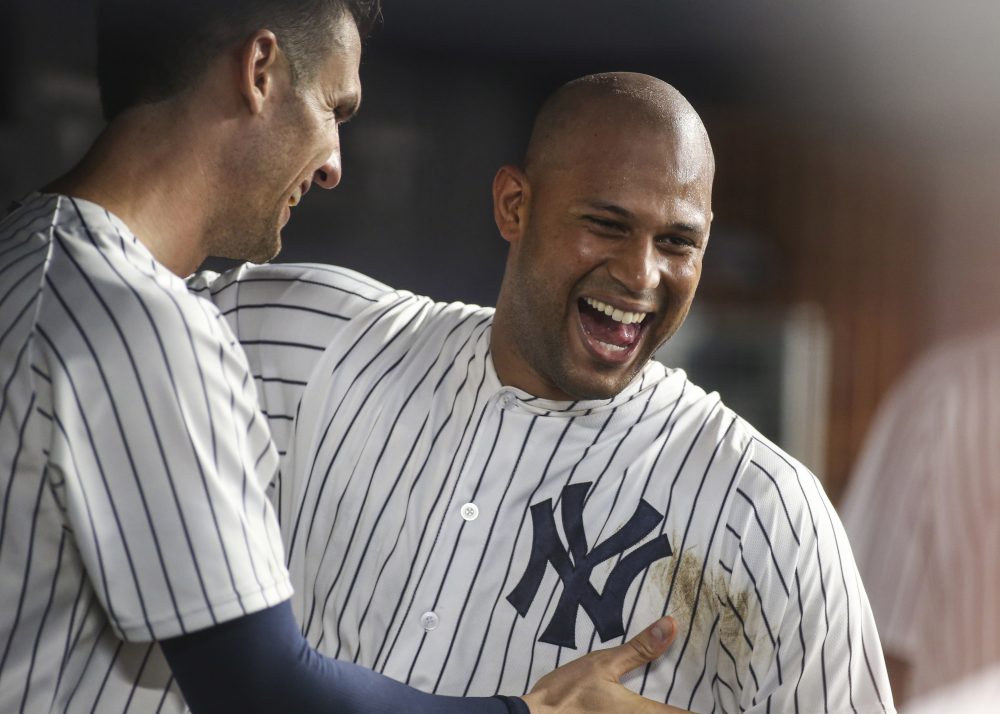 Congratulations everyone! We have made it to the midway point of the 2018 baseball season! Can you believe it? I cannot. This season seems to be flying by and while it seems like just yesterday when the Dodgers’ season was over, the Mets were going to win the NL East and the Yankees started 9-9, it’s actually been a while for all three of those teams. The Dodgers are just two games behind the first-place Diamondbacks in the NL West, the Mets are only a game ahead of the Marlins for the battle of the NL East basement, and the Yankees, well, they’re playing the way people thought they’d be playing in 2018.

This past weekend, we were “treated” to another installment of the rivalry between the Yankees and the Red Sox. This time the stage was in the Bronx and the series was, well, it was kind of strange.

On Friday, the Yankees came out and pounded the Red Sox while old man CC Sabathia, who turns 38 later this month, shut down the Sox lineup, allowing only one run in seven strong innings. The Yankees offense, led by Miguel Andujar and Greg Bird (and his two home runs), scored eight runs on 11 hits. Bird, who had started off slowly coming back from foot surgery, probably felt Brandon Drury nipping at his heels and decided to hit like people have expected him to hit.

In the matinee game Saturday, the matchup was Chris Sale vs. Sonny Gray. If you follow the Yankees, you know how bad Sonny Gray has been doing at home (he had an ERA over 7 heading into the start). Well, bad doesn’t even cover Gray’s outing. He lasted only 2 ⅓, he gave up six runs and seven hits with the big blow, a grand slam coming off the bat of Rafael Devers, in the first inning.

Gray had two strikes on Devers with two outs when he gave up the granny. In fact, he had two strikes with two outs on everyone on the bases during that grand slam. Adam Warren came in and kept the Red Sox from scoring more, but the Yankees couldn’t do anything against Chris Sale. He held them to one hit in seven innings. Sound familiar? The Red Sox ended up scoring a few more runs off the non-marquee guys in the Yankees pen and won 11-0.

On Sunday night, it would be David Price against Luis Severino in the rubber game of the series on national TV. Now, remember how I said that his series was kind of strange? Price didn’t fare very well against the Yankees’ offense. He lasted 3 ⅓ innings, giving up eight runs and nine hits. Five of those hits were home runs.

Next, Gleyber Torres hit his sixth three-run home of the season and 15th overall

In the fourth inning, Kyle Higashioka, who is catching because both Gary Sanchez and Austin Romine are injured, gets his first major league hit, a home run off Price.

You’d imagine that Alex Cora had seen enough by now. The Yankees were now up 7-0, Price was tossing his own version of the home run derby and now, a dude who hadn’t managed a hit in the majors took him deep. But Cora kept him in and after he got Brett Gardner to ground out, Hicks was up to bat again, and this happened:

Now Cora had seen enough. Hicks added another home run in the eighth inning and became the first Yankee since Alex Rodriguez to hit three home runs in a game.

Even cooler than that? He’s only the third player in Yankees history to have a three home-run game against the Red Sox, joining Lou Gehrig (1927) and Mark Teixeira (2010).

Oh, and Luis Severino pitched like Luis Severino, holding the Red Sox to two hits in 6 ⅔ innings. He also walked three and struck out six. He lowered his ERA to 1.98 which is tops in the American League. The only pitcher with a better ERA is Jacob deGrom who is at 1.84. Severino is 11-1 with a 1.70 ERA in his past 15 starts.

The Red Sox and Yankees are tied atop the American League East again with the Yankees owning a slightly better winning percentage (.667 vs .654). I have a feeling the AL East is going to come down to September but don’t quote me on that.

The Nationals and Phillies were locked in a 3-3 tie from the fifth inning Sunday. In the bottom of the 13th, Andrew Knapp came off the Phillies bench to pinch-hit for pitcher Nick Pivetta and, after sitting for nearly 13 whole innings Knapp delivered with a one-out, pinch-hit, walk off home run. How fun is that?

It was the Phillies’ first walk-off in two years.

Don’t look now, but the Rays are now a game over .500 and they got there by sweeping the previously red-hot Astros in Tropicana Field. Last week, they swept the Yankees in three-games at home.

On Sunday, Mallex Smith hit the deciding home run, his first of the year, in the bottom of the eighth inning.

It’s a good thing he did because Evan Gattis hit his second home run of the day, and 17th overall, in the top of the ninth to cut the lead to 3-2—but Sergio Romo settled down and picked up his eighth save of the season.

The Orioles pulled off a feat that wasn’t the kind they should ever brag about. They finished the month of June winless against their AL East opponents. But Sunday was a new day and they went ham on poor Deck McGuire in the fourth inning as they scored six runs. McGuire, who started the game for Anaheim, was on the hook for five of those six runs. Manny Machado and Mark Trumbo went back-to-back.

Trumbo hit his second home run of the day in the bottom of the fifth off Eduardo Paredes.

Baltimore went on to win the game, 8-2. See? July is already better than June.

It was Canada Day on Sunday. The Blue Jays didn’t have a fun time, losing 9-1 to the Tigers, but Canadian and Seattle Mariners left-hander James Paxton celebrated with a gem against Kansas City, pitching eight scoreless innings with 11 strikeouts.

And it just so happened to be Paxton’s bobblehead day.

The Mariners swept the Royals and have won seven in a row overall.

This was one of my favorite things over the weekend. On Sunday, the Cubs’ offense exploded for eight runs in the second inning against the Twins. Naturally, Cubs starter Jon Lester was the one who started the scoring with a three-run opposite field shot—because that’s exactly what you’d expect.

Lester went into Sunday’s game with a .121/.121/.121 line but with the way he swung the bat, and dropped the bat, you’d assume he was a home-run hitter. Another thing you’d assume is that with an eight-run second inning the Cubs had the game at hand when the score was 8-1. Not quite. In fact, the Twins made it a game in the top of the eighth, scoring five runs to make the game 11-10. Alas, the Cubs were able to hold on and take the series winning three out of four games.

Who does Kevin Pillar think he is? Superman? Spiderman? Good Lord.

Even Nick Castellanos couldn’t be mad at Pillar’s catch. It’s just a shame it happened in a game the Jays lost, 9-1.

It’s time for the AL East to play the NL East again. There are a few key matchups this week. Boston is visiting Washington, Atlanta is visiting the Bronx, Tampa is traveling southeast to play in Miami and though it doesn’t start until Tuesday, Baltimore is traveling an hour to visit Philadelphia. Toronto and the Mets are being left out of the fun.

On Monday night, the pitching matchup in Washington is a battle of former Cy Young winners when Rick Porcello and Max Scherzer square off. In the Bronx, Anibal Sanchez will be up against Jonathan Loaisiga, who is making his third start, and in Miami, Nathan Eovaldi will be matched up against Wei-Yin Chen.

In Kansas City, Corey Kluber is looking to rebound from the worst outing of his career. He lasted only 1 ⅓ innings against the Cardinals on June 26 and gave up six runs on six hits, including two home runs. He’ll be facing the Royals and Jakob Junis.