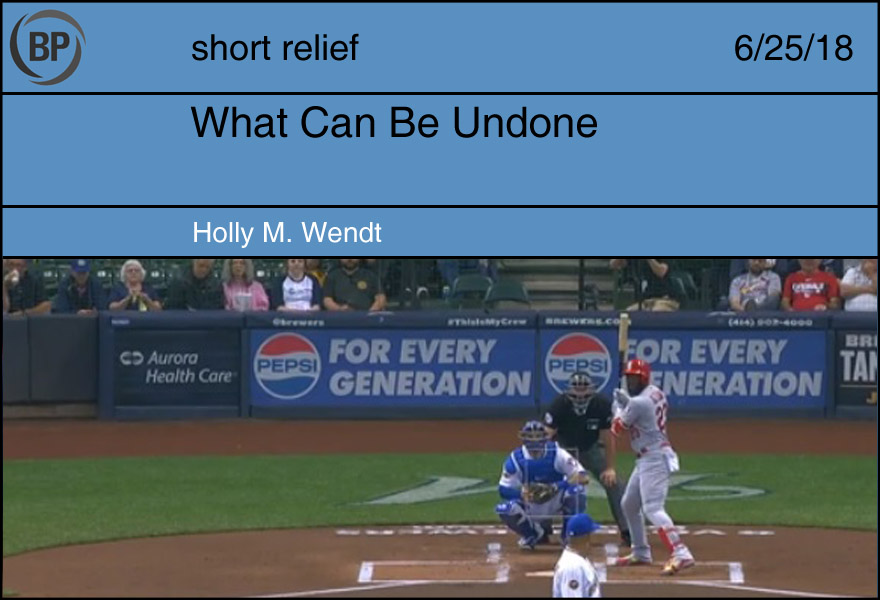 On Friday evening, during a tight game between the Cardinals and the Brewers, a fan crocheted in the stands. The act was, in multiple quarters, erroneously reported as knitting, but knitting uses two needles and crochet a single blunted hook. Much of Friday’s commentary had to do with the idea that if she was crocheting during the game, she couldn’t possibly be aware of the masterful pitching performance before her, that her front row ticket was wasted, et cetera and et cetera.

If you actually watch the woman crocheting, she’s watching the game intently, as much as anyone else, and if she glances at her hands once in a while, it’s no more than anyone else might glance at the dugout or turn their attention to the nachos or beer or ice cream in their own hands. Most importantly, whatever she’s doing with her eyes or her hands—as it’s not affecting anyone else’s enjoyment of the game—is none of anyone else’s business, and policing the way others enjoy their baseball is tiresome.

Further, we are no strangers to the fiber arts here at Short Relief, and I’m also someone who knits during my baseball-watching hours. What perplexes me in this conversation is not so much the pearl-clutching about someone crafting during the game as the relative scarcity of people doing so. Knitting and crocheting are perfect companions to baseball.

There are multiple practical reasons for this. First, there is undeniably a great deal of down time in a baseball game, so while the pitcher and batter are engaged in their dance of calling time and resetting, you can check the pattern, change colors, or test the fit of the sock in progress and not actually miss anything, and these pauses happen all the time. Second, if you, like me, suffer from Fear of Doing Nothing while grasping futilely for relaxation, knitting and crocheting provide a kind of balm for the anxious workaholic tic. You’re not doing nothing. You’re getting ahead on holiday gifts, assisting charitable efforts, or making the dinosaur hat you have always wanted.

More than all that, though, knitting and crochet create metaphoric balance in their malleability. Nearly anything you do to your fiber arts project—as long as you haven’t snipped the whole thing into confetti or accidentally felted your wool—can be undone. If dissatisfied, a tug will reduce fabric to space and string again, and the artist can begin wholly fresh. In baseball, there is no undoing. The many repetitions of each individual sporting act across the arc of a baseball season may make it seem possible to undo a failure, to “pick up” the batter before, but that’s illusory. The moment is spent, and what came before has specific bearing on what comes after; baseball’s numbers will not let us forget this.

Several days ago, I unraveled a sweater I’d been working on for months. The pattern was replete with cables, the needles thinner than barbeque skewers, and my progress an investment of time, but, ultimately, the thing was never going to fit, and the reason was that I screwed up. I missed a needle change early on—no explanation other than unforced error. By the end of the day, though, that same yarn was on its way to becoming a completely new thing: a different sweater, no cables, no needle change. The needles have no memory, and the yarn’s erases easily. I could undo the outcome I didn’t like, unlike Cardinals pitcher Jack Flaherty in the bottom of the seventh. 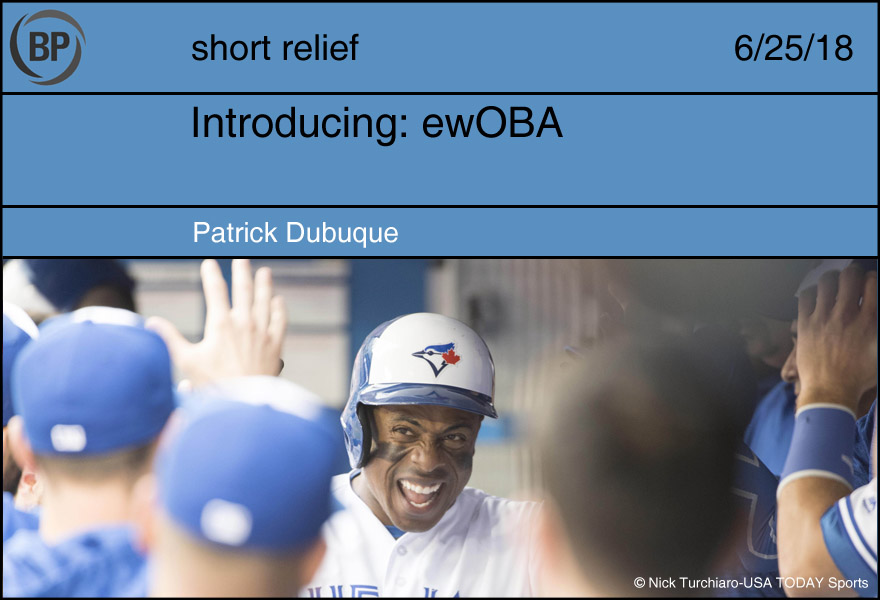 It’s been a good millennium for baseball analytics so far, but there’s no question that debates still arise from the way we measure the game. The idea that three WAR metrics might calculate a player’s value differently, using different weights and inputs, still has the capacity to blow people’s minds. But even among the experts, the battle rages. A while back none other than Bill James took WAR to task for failing to align with the standings; more recently, the batted-ball-driven xwOBA came under fire for its lack of predictive value.

The heart of many a conflict centers on whether certain statistics are descriptive, predictive, or both. OBP, for example, appears to be a descriptive stat, and yet it has value judgments baked into it (the disinclusion of reached on error, for example) that make it less than entirely honest. FIP, which was scaled to ERA and thus treated by the world as a flag for regression, has the same problem. And then there’s the problem of the human brain: its evolutionary defense mechanism of deciphering patterns treats even the most innocent, factual remark (say, “Max Muncy has a higher True Average than Aaron Judge”) as a lead-in to the gambler’s fallacy.

But perhaps the biggest problem of all has been the path of modern baseball analytics to strip away all the debris of factual evidence, with its luck and its chaos, to discover the pure, unrefined true talent locked deep within each bag of skin. The real issue: we haven’t gone far enough.

That’s why Baseball Prospectus is creating a new version of wOBA, titled ewOBA, short for Ethically Weighted On Base Average. But instead of evaluating how players “should” perform based on their true talent, ewOBA judges how they “should” perform based on their moral standing—the good deeds in their lives that will, in time, be repaid. Think of it, in layman’s terms, as “expected karma.” After all, utilitarianism was a good idea, but what it really needed was a bunch of supercomputers to really make it work.

The process, which began life during the production of Deserved Run Average, is a complicated one, using mixed modeling and data from a wide array of sources: lives saved, friends talked out of poor decisions, percentage of recyclable material actually recycled. Like xwOBA, however, we should stress that this, too, is a descriptive rather than a predictive metric, as anyone who has witnessed bad things happen to good people can attest. Just think of it as a metric for how well a player should be performing, based on the moral and social actions that have led them to that exact point in their lives.

Unfortunately, leaderboards aren’t in place for ewOBA at this time, but for those in fantasy: Curtis Granderson is owed a hot streak.