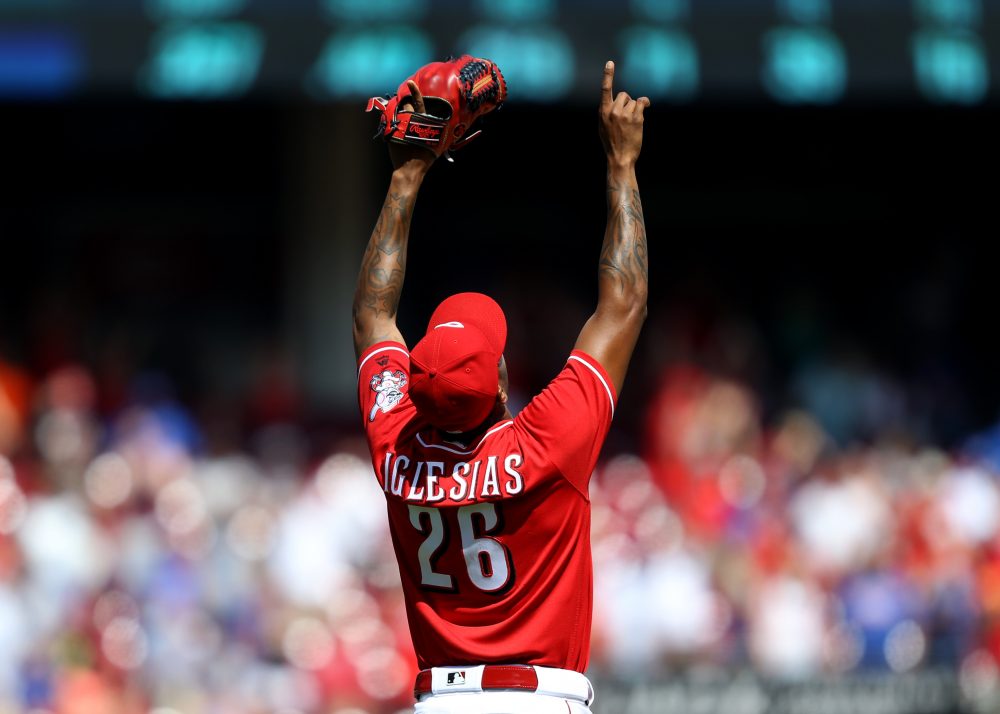 Take for instance the Reds, who are not only riding high on a seven-game winning streak but, in the midst of it, they also completed a four-game sweep against the Cubs, something they hadn’t done in 35 years. Think about that. The last time the Reds were able to sweep the Cubs in a four-game set was in 1983. The World Series-winning 1990 Reds weren’t even able to do it. They played a four-game series from Aug. 30 – Sept. 2, 1990, and the Reds won three of four.

In 2018, the Reds find themselves in last place in the NL Central, but from the way they’ve been playing this past week, you wouldn’t know it.

On Thursday, they scored six runs in the sixth inning and beat the Cubs, 6-2. On Friday, they spread out the scoring a bit, scoring four runs off Jose Quintana and two off the combination of Justin Wilson and Rob Zastryzny. Luis Castillo picked up the win. He pitched 5 ⅓ innings, giving up three runs on four hits, including a home run by Kyle Schwarber. Kyle Crockett, David Hernandez, and Raisel Iglesias shut down the Cubs for 3 ⅓ innings to preserve the win.

In the last game of the series, the Reds had to stage a dramatic comeback to win the game. They found themselves down 6-1 heading into the bottom of the seventh inning and at that point it looked like the Cubs could be able to salvage the last game of the series. The Reds offense had other ideas. Cubs starter Mike Montgomery started the inning, and he gave up a single to Scooter Gennett, a double to Adam Duvall and a single to Jose Peraza. The Reds were down 6-1. Joe Maddon took his starter out and replaced him with Pedro Strop who didn’t fare much better than Montgomery. The Reds inserted Jesse Winker to pinch hit for Brandon Dixon, and he hit a three-run home run.

Now, the Cubs found themselves in a bit of a pickle. The Reds scored five runs, and there were still no outs in the inning. Billy Hamilton kept the hits coming with a single while Scott Schebler walked to put two on with again none out. Tucker Barnhart hit a single to score Hamilton and tie the game at six. Joey Votto was up next, and he hit a double that scored Schebler and advanced Barnhart to third base. Votto was called out at second, but the umps reversed the call. Alex Blandino pinch hit for Jackson Stephens and struck out. There was finally an out. Strop intentionally walked the guy who started it all, Gennett, and was able to get Duvall to line out to Addison Russell for out number two. Unfortunately, Strop couldn’t get Peraza out. Strop walked him with the bases loaded, and the Reds scored their seventh run of the inning. Maddon finally took Strop out and replaced him with Randy Rosario who struck out Winker to end the inning. The score was 8-6 Reds.

Reliever Amir Garrett pitched a scoreless eighth, and Raisel Iglesias closed the door in the ninth to pick up his 13th save of the season.

Over in the American League, it took until June 24 for the Yankees to lose three games in a row and the team to do it was also the first to sweep them in a series this season. That team is none other than the Tampa Bay Rays, of course. They’re definitely the team everyone expected to sweep the Yankees. Not Boston or Houston.

On Friday, CC Sabathia was the hard-luck loser for the Yankees. He held Tampa’s offense to two runs in 5 ⅓ innings, but six Tampa pitchers held the Yankees’ offense to one run on five hits.

The next day, it was more of the same as five Tampa pitchers shut out the Yankees. Meanwhile, Sonny Gray’s struggles continued as he surrendered all four runs that Tampa scored. The Yankees were outhit 9-4 in the game and were shut out for only the second time this season.

On Sunday, their starter, Domingo German struggled to make it into the fourth inning, giving up six runs on nine hits, including a home run by Adeiny Hechavarria. German started the fourth off by hitting Kevin Kiermaier, so he was lifted, mercifully, for reliever Adam Warren. The Yankees bullpen then went on to throw eight scoreless and hitless innings, while the offense scored two runs in the fifth and one in the eighth tie it. The teams exchanged zeroes until Yankees reliever Chasen Shreve gave up a first-pitch, walk-off home run in the 12th inning to first baseman Jake Bauers.

Tampa completed the sweep in exciting fashion because Bauers hit his home run where there aren’t any speakers in the way. The same cannot be said for poor Clint Frazier who thought he had put the Yankees ahead 7-6 in the top of the ninth only to see the ball ricochet off a speaker above leftfield and into shortstop Hechavarria’s glove.

Talk about bad luck or maybe Tropicana Field is just a shitty excuse for a ballpark and should be swallowed by a sinkhole. You decide.

Chris Sale struck out 13 Mariners on route to a 5-0 win. He threw seven scoreless innings and only gave up four hits and a walk.

It was Sale’s seventh win of the season, and it was his second consecutive start with double-digit strikeouts. Sale has six of those starts total this season. Sale now has 153 strikeouts this season, and he leads the AL.

Betts, Leon, and Devers all picked up an RBI in the win.

I’m going to venture a guess and say that the fans who went out to Citi Field to watch the final game between the Dodgers and Mets on Sunday afternoon had no idea they’d be watching one team have its own version of a home run derby. Regrettably, for the home crowd, it was the Dodgers who smashed seven home runs en route to a 7-6 win in 11 innings.

Cody Bellinger and Kike Hernandez hit two home runs each, Max Muncy, Joc Pederson and Justin Turner each hit one. All of them were solo shots with Hernandez and Muncy going back-to-back to open the game.

Turner’s home run was the deciding run in the top of the 11th inning. Isn’t that always the way? The guy who felt wronged by the Mets at the time he was non-tendered, even though he really wasn’t, is the one to win the game. Turner insists that he harbors no ill-will now towards his former team, but he did them dirty on Sunday afternoon by Flexen his muscles and hitting a go-ahead home run. (I’m not sorry.)

Chris Flexen took the loss, and the Dodgers are now 15-2 in June when they hit at least one home run.

On Thursday, Mitch Haniger made a fantastic catch at Yankee Stadium to prevent a Giancarlo Stanton ball from reaching Monument Park and on Sunday, he got a taste of his own medicine. Haniger lifted a fly ball to deep right in Fenway only to have Mookie Betts take a home run away from him.

Payback is a b, dude.

After being swept out of New York by the Yankees and losing two out of three to the Red Sox, the Mariners will be in Baltimore, their third and final stop on Amtrak’s Northeast Corridor. Felix Hernandez will be facing off against Andrew Cashner in the first game of a four-game set.

The Cubs promoted pitching prospect Duane Underwood Jr. to pitch against the Dodgers on Monday night. The right-hander has gone 3-7 with a 4.27 ERA in 13 starts for Triple-A Iowa. He will be matched up against Kenta Maeda in the first game of a three-game series.