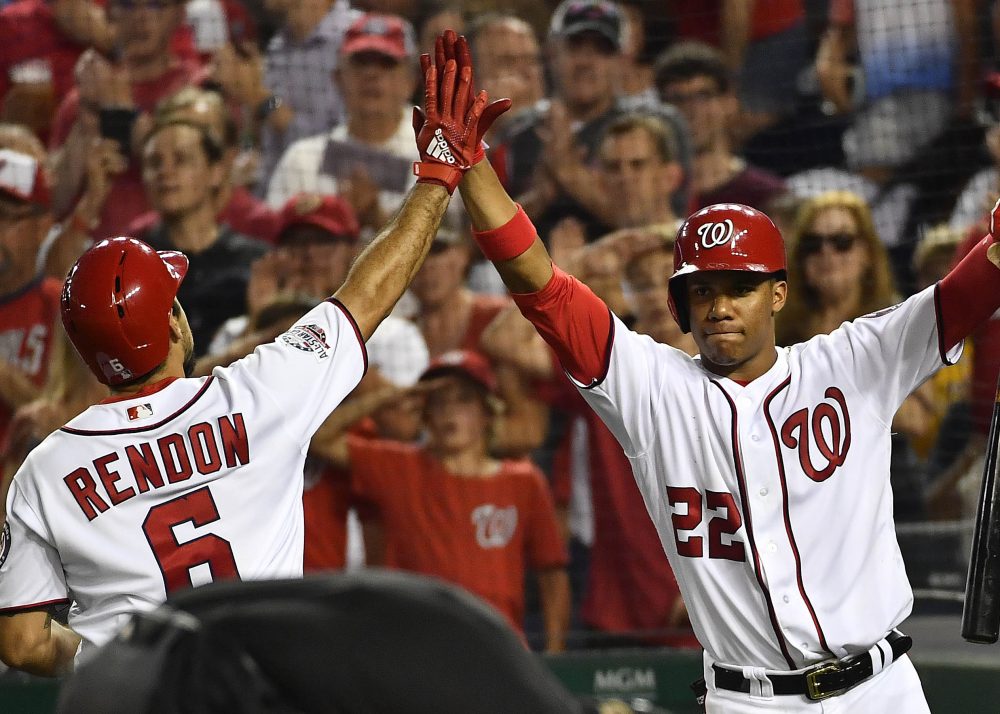 The Nationals went into the Beltway battle with the Orioles in danger of doing something that only a handful of mediocre-to-bad teams and (bizarrely enough) the Yankees had done—which is drop a series to Baltimore. With that being said, you had to like Washington’s chances to winning the rubber match Thursday considering they had Max Scherzer going, and normally that alone is a good omen for the Nats.

However, this was a night where Max Scherzer threw a wild pitch that was described as “50 Cent-esque,” so you knew that things were about to get weird for Washington on the evening.

This may be jarring, but we procured footage showing that Max Scherzer may, in fact, be human.

You also may have noticed that the O’s were up by one. This was after Colby Rasmus hit a solo homer. Yes, that really happened and here’s video evidence of it happening.

Mark Trumbo homered in the fourth inning to break a 1-1 tie and then Anthony Rendon countered in the sixth inning with a homer of his own to make it 2-2. Despite Max Scherzer overcoming his Curtis Jackson moment on the mound and delivering another solid start, the game was still very much in doubt once he left the game.

With the game still tied in the bottom of the eighth, it was time for the teenage time traveler to burst onto the scene and change Washington’s fortunes in a good way. Juan Soto came to bat after Bryce Harper and Trea Turner led off the eighth with a double and single, respectively. He proceeded to smack a fastball all the way to the left field wall in order to score Harper and Turner to put the Nationals ahead for good.

Juan Soto is younger than 19 players selected in the 1st round of tonight’s #NBADraft.

(He hit a game-winning 2B tonight.) pic.twitter.com/233wgdIonu

The list of series victories for Baltimore will grow as the season progresses, even though they’re having an especially calamitous season right now. Still, the Nationals have to be feeling relieved that they dodged that pothole and can continue rolling merrily along on their path back to the top of the NL East.

It’s finally happened. It took until late June but the moment of reckoning has finally come for the Seattle Mariners as they suffered their first sweep of the season. With that being said, you could do worse than getting swept by the Yankees in the Bronx, so it’s not like Seattle has anything to be ashamed of.

With that being said, it’s hard to win when the Yankees come out of the gates mashing dingers all over the place, which is what they did in this game as Aaron Judge and Miguel Andujar both unloaded in the bottom of the first inning to give New York a 4-0 lead once it was over.

Those four runs ended up holding up as the Yankees eventually won 4-3. Here’s a fun fact for you: The Yankees were 9-9 at the end of play April 20. It’s June 22 and they’re now 50-22. You could say that they woke up between now and then.

The Giants have been floating around .500 for what feels like all season and they once again reached .500 after picking up a 3-0 win over the Padres on Thursday night. However, this had to have been an encouraging night for Giants fans since we got a vintage performance from Madison Bumgarner.

He ended up throwing eight innings of shutout ball against San Diego, striking out eight while only walking two and giving up three hits in the process. And since it’s Madison Bumgarner that we’re talking about here, he was the one who broke the tie with his work at the plate. It was a sacrifice fly but it’s still not shocking to see him helping himself like this.

Bumgarner helps his own cause

So Thursday was a bad day at the office for the Cardinals and their defense. They lost 11-3 to the Brewers and six of those runs that Milwaukee scored were unearned. St. Louis paid very dearly for the whopping four errors that they committed, as Milwaukee made sure to collect the pound of flesh that they were owed for those mistakes.

This fly ball in the first inning that Marcell Ozuna hilariously misjudged wasn’t ruled an error but it was a bad omen for the Cardinals when it came to how the rest of their night would go.

It was nice of you to say hello to the #Brewers bullpen, but don’t you have a job to do? pic.twitter.com/OmfNQiagqq

Mike Trout celebrated his 1,000th career game in typical Mike Trout fashion, which is to say that he reached base a bunch of times and scored runs for the Angels. Trout didn’t get any hits but he did walk three times and scored two runs as well. He’s now sitting on a 20.2 percent walk rate with a .471 OBP. It must be nice to have the MVP award sewn up in June, huh.

With that being said, Trout wasn’t the star of the show in this one. Instead, it was Luis Valbuena who stole the show for the Angels. His two homers helped mark game 1,000 for Trout as an 8-5 victory.

The Yankees may have bopped another pair of dingers but it very easily could have been three. Mitch Haniger made sure that that number stayed at two by robbing Giancarlo Stanton of a big fly to dead center field.

The @Mariners looking to rally in the Bronx as Mitch Haniger shows off his glove work on @ROOTSPORTS_NW pic.twitter.com/mEJp4NmRp2

Remember how much fun that Mariners-Red Sox series was last week? Would you like to get some more of that? Well fortunately for you, Seattle’s East Coast swing has them rolling into Fenway Park this weekend, so that means that we’re going to get more of it. The Red Sox will get another crack at Wade LeBlanc (3.16 DRA, 100 cFIP), who completely shut them down last weekend.

Meanwhile, the Nationals will be grateful to head into their weekend series with a series victory under their belt since they’ve got the Phillies coming to town for the next three games. Saturday’s game would be worth keeping an eye on, if only because Philadelphia will have Aaron Nola going and he’s been very good this season (2.40 DRA, 76 cFIP) and it’ll be interesting to see how he fares in his first start against the Nationals.