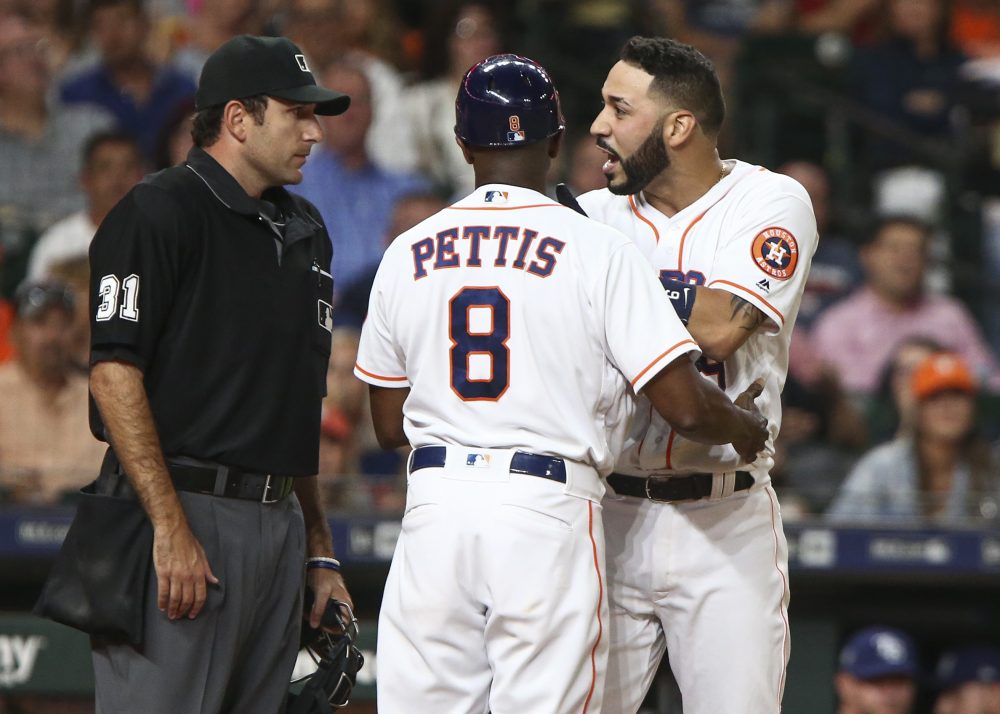 The Tuesday Takeaway
We knew the Houston Astros would lose again. Don’t get me wrong, I was rooting for a 137-win season. Think of the stories! Twenty-one wins better than the previous league record! There would have been Sports Illustrated pieces asking if the Astros were bad for baseball, talking heads screaming on our TVs about this and that, and unread books to litter our shelves about the Greatest Team on Earth.

On second thought, that sounds terrible.

The point is, the Astros are good. But they’re still capable of losing, as their 12-game winning streak ended Tuesday night at the hands of the Tampa Bay Rays.

It didn’t exactly come in the form one might have expected. God of Pitching Justin Verlander struck out 10 and allowed just one earned run, and his opposition, Blake Snell, walked seven(!), but a measly Wilson Ramos RBI single in the eighth inning was enough for Tampa Bay to sneak out a 2-1 win and at least briefly detail the hottest team in baseball.

Verlander was still Verlander, as he somehow lowered his league-leading ERA (by 0.01, but still) to 1.60 and now has 130 strikeouts against just 21 walks in 106 innings. The Astros still lead the AL West and have a ridiculous +157 run differential. Tuesday was a loss. Their first in a while. But something tells me they’ll be just fine.

Video: Cubs closer Brandon Morrow on his back tightness https://t.co/zB8W2A4Dms via @MDGonzales pic.twitter.com/5v5KxScBQl

The Cubs split their day-night doubleheader with the Dodgers on Tuesday, but could have easily won both. They took a lead into the ninth inning of Game 1 and turned to Justin Wilson because, it turns out, closer Brandon Morrow injured his back taking off his pants. It went poorly.

Game 2 went better, at least for the Cubs, as they took advantage of L.A,’s bullpen after six shutout innings from Rich Hill to battle to a draw through nine before a Kris Bryant triple and Albert Almora Jr. single sent them home winners.

Well, Strickland punched a wall last night after coming out, broke his pitching hand. Out 6-8 weeks. Seriously. One of Watson or Dyson will get lion’s share of save oops. #sfgiants

The Giants beat the Marlins, but that was not the news of the day in San Francisco as they lose their closer trying to impersonate LeBron James. No word on whether or not there was a picture of Bryce Harper on the wall Hunter Strickland punched.

There was a lot of anger by the Bay on Tuesday.

Quick Hits
Jason Vargas pitching for the Mets in Coors Field went about as well as anyone could have expected.

The Mets kept things interesting, turning a 9-2 deficit into a 10-8 loss to end their three game winning streak.

The Yankees can homer too, of course. They sent Seattle to its second straight loss by sending four baseballs out of the park, three against Mariners’ starter Marco Gonzales.

The last of those four homers, you may have noticed, came off the bat of Gleyber Torres, who has been pretty good, I guess.

Gleyber Torres with his 14th career HR in his 50th career game. Aaron Judge also had 14 HR in his first 50 games.

Among teams he’s thrown at least 50 innings against during his career, the only team Chris Sale has fared worse against than the Minnesota Twins (4.21 ERA) is the Cleveland Indians (4.78 ERA).

Hardly terrible, of course, but against his former AL Central nemesis Tuesday, Sale was actually quite good, striking out 11 and giving up just two runs on three hits in seven innings.

It didn’t matter, though, as the Red Sox offense was mostly listless against Jose Berrios and three Minnesota relievers, and all Eduardo Escobar does is double, apparently. His second of the game and league-leading 32nd of the season broke a 2-2 tie and Robbie Grossman’s triple provided insurance in a 6-2 Twins’ victory.

The Brewers beat the Pirates 3-2. Freddy Peralta allowed just two hits and nothing else in six innings of work. Here are a couple of noteworthy things that happened in this game that have nothing to do with the result.

Peralta’s performance had heart, but Beer Getting Hit With Baseball had a beer getting hit with a baseball!

Mike Trout reached base every time he came to the plate on Tuesday. Nothing new, I know. But aside from the two walks, his two run-single somehow brought in more than two runs.

Dude can do everything.

Defensive Play of the Day
The Nationals beat their Orioles on Tuesday. Every team does that, no big deal. It was of the come-from-behind variety, however, and Trea Turner helped prevent the deficit at the time from growing even larger.

When it comes to large adult sons, Justin Bour doesn’t get enough credit. He plays for the Marlins, of course, so that’s one of the biggest reasons, but he’s a pretty good player! And the big, lumbering giant with the Bondsian head can sometimes provide us with moments of glee like this.

What to Watch For Wednesday
Jake Arrieta looks to bounce back from a couple of rough starts in a row against a team he’s probably pretty familiar with in Michael Wacha and the Cardinals. Corey Kluber also looks to bounce back from a rare bad start against Reynaldo Lopez and the White Sox. Intriguing Yankees youngster Jonathan Loaisiga was wild but unscored upon in his major league debut, so we’ll see how he fares against Felix Hernandez and the Mariners. The Astros will look to start a new winning streak as they send out Charlie Morton against Nathan Eovaldi and the Rays. Also the best name in baseball, Austin Bibens-Dirkx, is on the mound for the Rangers against Jakob Junis and the Royals.