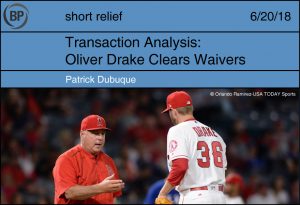 Long before I became a writer, I remember reading the 2004 Baseball Prospectus on the floor. I’d just moved back from overseas into a spare room of a friend’s new house; he hadn’t gotten furniture yet, and all I had was an old futon. It was autumn, and I remember being so cold; my circulation couldn’t adjust to the Seattle temperature, like a pitcher traded to Colorado. I read that book from cover to cover, scouting for my fantasy team; in an era before Statcast or even FIP, my high-tech strategy was to look for pitchers with bad records and high strikeout rates in the minors. I was a big Matt Cain fan. They were pleasant times — uncomfortable, cold, but pleasant.

Maybe that’s why I don’t get Oliver Drake. Drake has been cut three times in two months, sports an ERA above eight, and wields a pitching motion like an old man closing a garage door. He leans hard to the left as he throws, almost like a mid-pitch cringe, and comes over the top with a fastball, a splitter, and an overhand curve, all of which have basically zero horizontal movement. It’s like playing rock-paper-scissors, except instead it’s straight-drop-more drop. It’s the pitching equivalent of a parfait. It’s not a collection of attributes that should work, Also, it’s not working.

So perhaps it shouldn’t come as a surprise that 29 teams looked the other way as the righty, still owed the league minimum, passed through waivers. Or that my smart friends shrugged so hard when I brought his name up that you could see it through the Gchat window. I’ve spent half an hour watching him cough up six runs to both the Astros and Reds, trying to see if he was tipping his pitches (he wasn’t, he just holds the ball with his split-finger grip and then changes to the fastball in his glove right before delivery). But I look at his stats, and a little of that 2004 Expert comes welling back up in me, thinking: this man’s life has been, for 19.2 innings, unjust.

Nineteen innings is nothing. It’s forgetting your work laptop at home one morning and having to spend an extra hour on the road going back and getting it. Nineteen innings is a toddler’s ear infection. Oliver Drake will never be an important baseball player; he’s too weird and too inconsistent to be trusted with high leverage, and he’s already in his age-31 season. But it just feels as if he deserves a job in some second-division bullpen, even though this is just what life is like now for sixth-inning relievers. He deserves plane rides.

Again, I don’t know. Mike Trout is the best ballplayer in the world, playing the best ball of his life. And I’m stuck thinking about the guy drafted ten years ago in a round that doesn’t exist anymore, pitching in a way no one probably wants him to, getting by until a couple things went wrong. I hope he gets the chance to get that ERA back into the sixes or sevens. 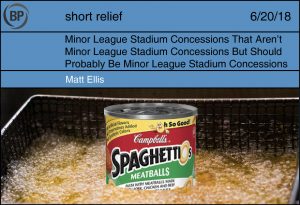 This one is relatively straightforward. It’s essentially a grilled cheese sandwich, except in addition to cheese, you drop a dollop of pure sodium shaped into cute little Italian pasta circles down into a vat of boiling oil, which I think adds even more sodium (?), but if not sodium, then at least any other godforsaken amount of horrific processed additives ready to enlist in the Great American Cholesterol Wars. Don’t forget an extra napkin, and, whatever you do, don’t order this on a Monday. 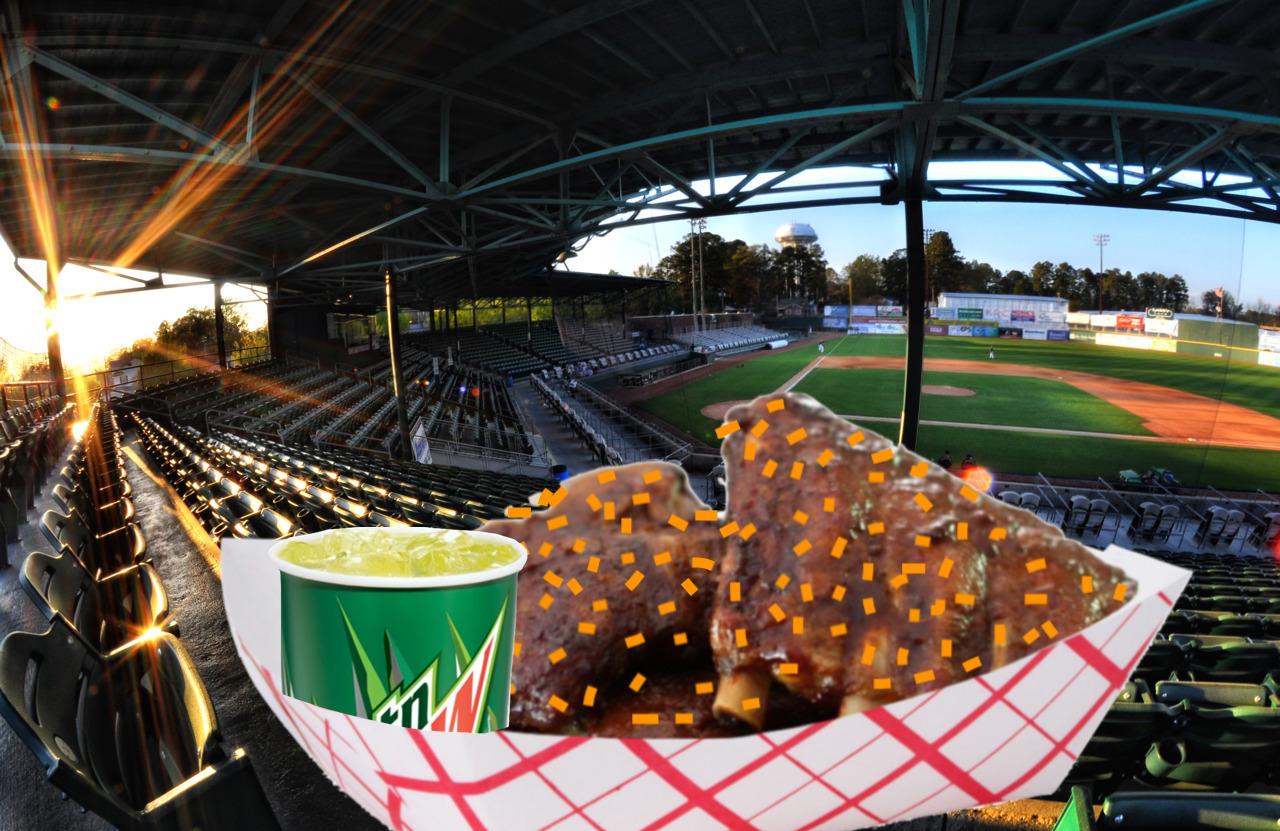 This little number has everything to celebrate about the great state of North Carolina — and for only $9 at that, until supplies or wills run out. You’ve got your Spicy Nacho Doritos® to celebrate the heat, for one, and with it a nice tub of Mountain Dew® Dipping Sauce to help combat the oppressive Atlantic summer humidity. Upgrade to Baja Blast® or Code Red® for only 75 cents.

FOUND AT HOME GAMES OF: Down East Wood Ducks 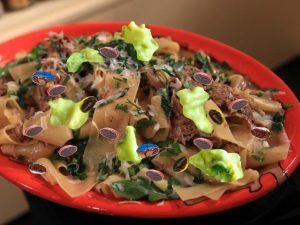 Each of these things on their own are good. Thinking about them together makes me want to die. In other words: It’s the 2015 New York Mets, Ladies and Gentlemen.

FOUND AT HOME GAMES OF: Portland doesn’t have its own minor-league team anymore, but you had better bet they’d have this if they did 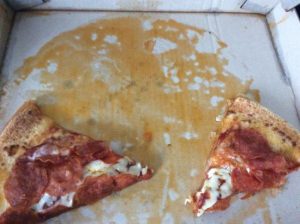 Seven dollars. No, we’re out of pepper — NEXT! NEXT CUSTOMER, PLEASE!