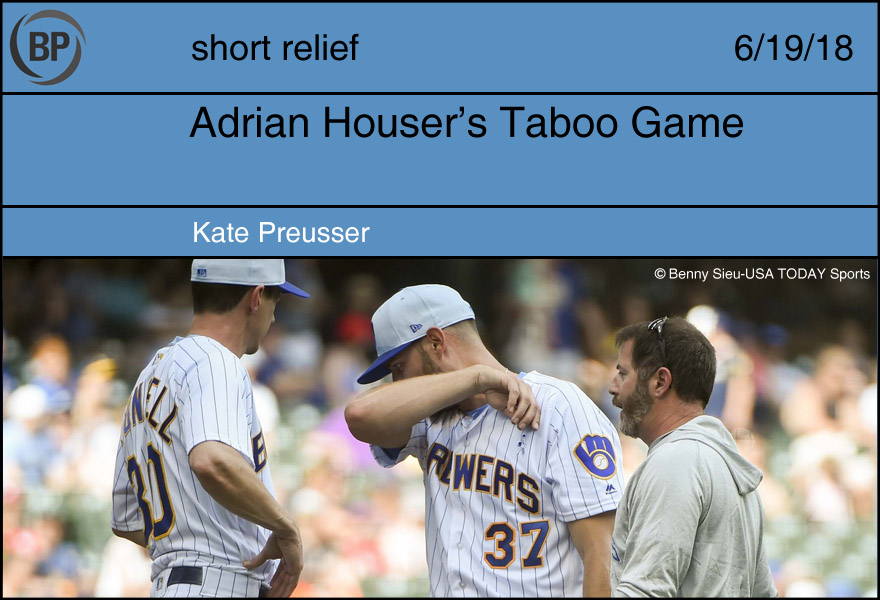 My father is fond of the phrase “threw up on his shoes” to indicate a person spectacularly failing at a clutch moment, usually used in conjunction with the phrase “not exactly covering himself in glory, eh?” It’s a phrase pairing that gets used a lot, because he’s a lifelong Mariners fan. Yet on Sunday, the Brewers’ Adrian Houser managed to not only literally throw up on his shoes but somehow also turn that tossed-cookies dross into glorious gold. In an inning where Houser vomited on two separate occasions–and on television, where friends and family and exes and childhood nemeses and the internet could all see–he managed to escape, giving up two hits and one run. For a regular reliever, this would qualify as a poor outing, but for a reliever who just tossed his cookies, again, on television, the literal stuff of nightmares, I am prepared to award him some kind of hybrid Medal of Honor-Nobel-Purple Heart-Daytime Emmy.

Throwing up during athletic competitions is actually quite common, although it’s more often seen in high-intensity sports where athletes can get wildly dehydrated or spend a long time pushing the very threshold of their endurance levels, causing increased lactate production that can upset the body’s chemistry. Distance runners, soccer players, and basketball players are all susceptible, as are football players, where vicious hits can trigger a bout of vomiting (often a scary sign that the player in question is concussed). But none of these descriptions seem to apply to baseball, a game that is genteel enough to offer players the chance to get off the field every half-inning to go attend to personal matters behind the curtain. The lavatory is just down a set of stairs, no need for any Paul Pierce poo-spiracy. Unsightly pimple? Take a moment off-camera to cover it up. Even Bryce Harper’s flu game during his debut year in 2013, during which he reportedly vomited four times while collecting four hits, is blissfully behind the curtain.

Not so the case for Adrian Houser, who briefly made Miller Park his personal vomitorium, in front of a crowd of 40,000-plus. Almost everyone has an epic upchuck story; I myself have a couple, including a first time at sleepaway camp when, disoriented and possibly food-poisoned, I got sick all over the campsite in the middle of the night, then buried the piles in a pitch-dark panic–poorly, it would turn out under the harsh light of day (I played along with the theory that a wild animal invaded the camp kitchen at night). Vomiting is itself a traumatizing act, a car suddenly thrown in reverse, and to do so with little warning, in public, is guaranteed nightmare fuel. It’s also something deeper: a cultural taboo, as explored by anthropologist Mary Douglas in Purity and Danger (1966), about the importance of boundary-maintaining as cultural practice. “Everything in its place” isn’t just instruction for messy-roomed children but a system of ordering that makes the world knowable to its inhabitants, that separates the clean from the unclean, the dangerous from the non-threatening. Hair on the head is a thing of beauty; hair in the soup is a thing of disgust. These boundaries apply to the body itself, as well: what is inside should not be outside, and if it is, should be dealt with swiftly and in a manner deemed to be culturally appropriate, washed away and cleansed. 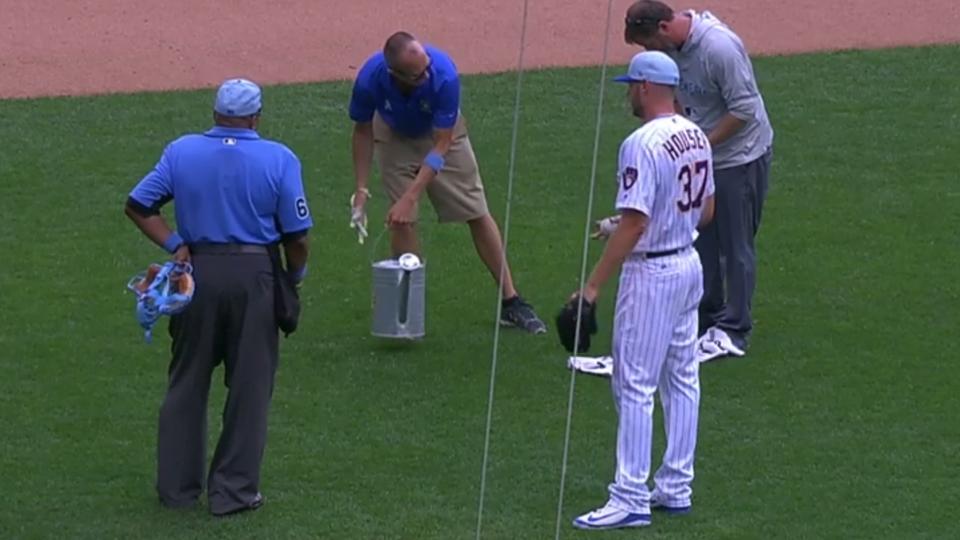 It’s a real bummer for Adrian Houser, who has pitched all of five major-league innings this year, to be the new kid in class who vomits on his first day. You never really get over being Vomit Kid. But hey, Curt Schilling did okay with his own bodily fluid taboo. My advice is to lean right into it and ask the Brewers to make a Hurlin’ Houser giveaway. What more powerful artifact to defeat a cultural taboo than a bobblehead? 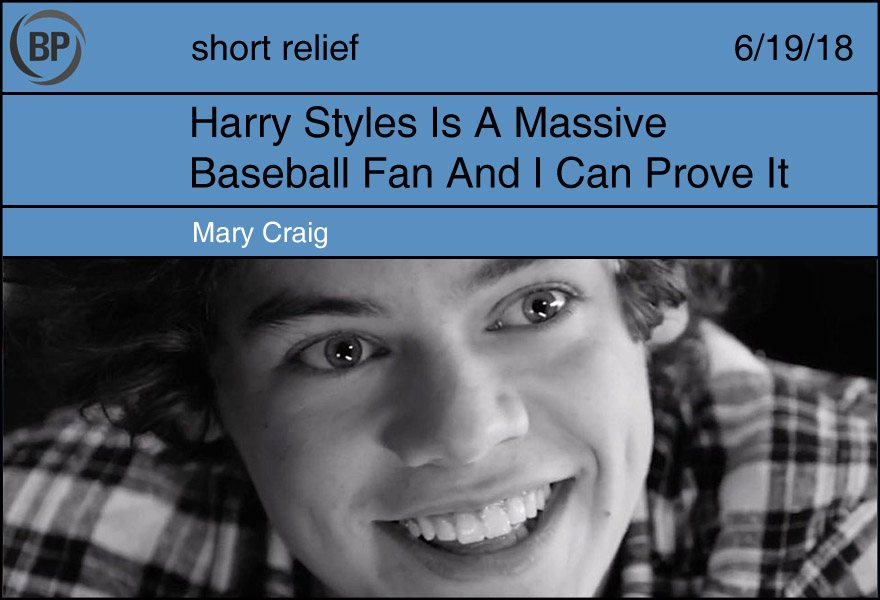 Harry Styles is England’s biggest baseball fan. There he is, declaring his love for the sport on Twitter, for all to see and comment on. But he has also quietly expressed his fandom throughout the years in his song lyrics. If you don’t believe me, take a look below at the definitely not meticulously selected lyrics that absolutely represent his corpus as a whole.

Think that we got more time
When we’re falling behind
Gotta make up our minds
Or else we’ll play, play, play all the same old games
And we wait, wait, wait for the end to change
And we take, take, take it for granted that we’ll be the same
But we’re making all the same mistakes

Yeah, yeah, that’s what crazy is
When it’s broken, you say there’s nothing to fix
And you pray, pray, pray that everything will be okay
While you’re making all the same mistakes

It’s nearing the trade deadline. Your team, after starting off strong, is–for the fourth consecutive year–beginning to falter. As the President of Baseball Operations, you’re tasked with preventing the same disappointing ending from happening, but your ownership group wants to limit payroll, again. Here, Harry expresses your frustration. He knows the soon-to-be third place finish isn’t really your fault.

This song initially appears to be about a tumultuous relationship between a man and a woman, but it is actually a critique of the manufactured construct of “hometown loyalty” from the veteran player’s perspective. He accuses the minor league system of “using him” since he was drafted by the team. Yet he feels extreme loyalty to the organization that gave him his start, repeatedly signing with the team despite knowing it results in “fool’s gold.” What a predicament.

Brooklyn saw me, empty at the news
There’s no water inside this swimming pool
Almost over, had enough from you
And I’ve been praying, I never did before
Understand I’m talking to the walls
I’ve been praying ever since New York

Not only is Harry Styles a massive baseball fan, he is either a Mariners fan or a Twins fan. Here, he discusses the perpetual pain of losing to the Yankees in the playoffs and watching your organization falter for years after. At this point, it is most definitely a curse, and all one can do is pray it eventually gets broken.

See? Harry Styles is a massive baseball fan. He speaks to us.