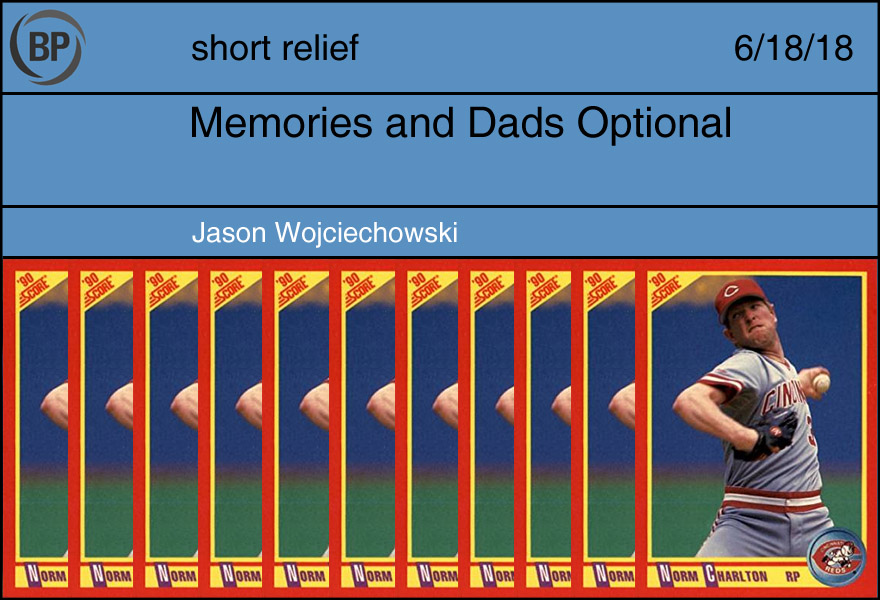 Deadspin published a nice piece by Joe DeLessio on Friday about digging through his late father’s massive, overwhelming collection of memorabilia, most of which was baseball stuff, most of which of that was Orioles stuff. The word “stuff” is often a filler term where a better, more precise descriptor isn’t coming to mind, but in this case, in a story that includes the father buying “a tire gauge branded with a logo of a blood-pressure medication because Cal Ripken Jr.’s picture was on the tire gauge’s box,” “stuff” gives the best sense of it.

To both get and keep such a collection requires both a deep desire to have everything and the ability to derive enjoyment from revisiting those things. I am, these days, an obsessive completist, but not so much a nostalgist. I have massive lists of the books I intend to read (all the ones by the good writers), far more than I can possibly manage in a normal lifetime, especially considering the equally massive list of movies I want to watch (all the ones by the good directors), minor-league parks I want to visit (all the ones, period), and saisons I want to drink (ibid.). I also have, in a storage vault 250 miles away, thousands of baseball cards from what I have recently learned is known as the “junk wax” era.

What I do not have is any real desire to spend time with those cards, flipping through them and remembering the good times. I used to keep programs, tickets, and mementos from the few games I’d attended, but once I gained enough self-awareness to realize I would never again look at them, I began tossing them into the recycling bin as soon as I got home. Baseball’s well-chronicled obsession with its past means I feel a little out of place in the fandom without this type of sepia-toned memories.

I’m not silly enough to ascribe this complex bit of brain chemistry to a sole cause, but it’s hard, as I write this on Fathers’ Day, not to think back to my largely fatherless childhood, void of trips to the ballpark or games of catch peppered with his memories of his own childhood, the Hall of Famers he watched, his exaggerated Little League exploits. I don’t mean I’m damaged, or that I have any particularly negative feelings about any of this, except to the extent that whenever I get my cards back out of storage, I will almost certainly be keeping most of them in boxes in the garage, where I will never look at them again. I can’t actually throw them out. They’re complete sets! But the story my child writes after my death will be one of back pain, dusty 1990 Score Norm Charlton extras, and deep puzzlement at the discovery of these never-before-seen cards in a stack of boxes by the beer fridge. 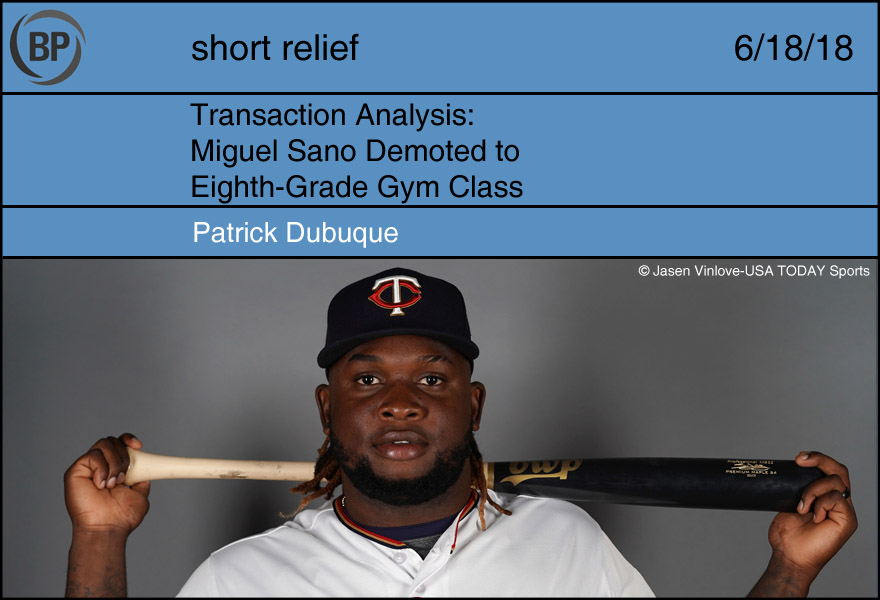 The Minnesota Twins, currently foundering to a 29-35 record in the non-competitive AL Central, have demoted 2017 All-Star Miguel Sano to nearby Anwatin Middle School in west Minneapolis. Sano has struggled with problems both on and off the field over the past year, fielding assault accusations and struggling with hamstring issues, and was hitting .203/.270/.405 with subpar defense at the time of his demotion.

Fans and members of the media expressed surprise at the transaction, not as much for the demotion itself but its severity, but the Twins organization is spinning the move as a positive for a player seen as a crucial piece of a playoff hopeful. Sources say that the team is looking to rebuild the slugger’s confidence, and that they expect Sano’s stay in Mr. Kesslar’s second-period P.E. class to be a short one. “We wanted to give the young man a change of scenery, help him get his head back together. Also, we wanted to see him destroy the hell out of some 45 mile-an-hour changeups.”

Sano reported to the gym on Friday and was hitting the ball well, according to reports, although Anwatin has yet to install tracking equipment. Unfortunately, the assignment did hit a snag on Monday morning, as Sano forgot to bring gym clothes and was forced to sit out the entire practice. He has two more violations before he fails P.E., the team noted in a press release.

If local sports radio is struggling to understand the team’s decision, they’re not the only ones: many of the students of Anwatin are also having a difficult time with their new teammate. “He scares me,” 13-year-old Johnny Estaban told the school newspaper in a recent interview. “I know he’s not mean, but… he’s so big. I’m afraid he’s going to run into me.” Seventh-grader Janet Wilson, who generally plays outfield, added, simply: “I always have to go get the ball.”

Meanwhile, Jeremy Knight, a self-confessed Twins fan, had a sunnier outlook. “It’s been really neat getting to meet Mr. Sano, especially because yesterday I was first captain. He was super nice, and we won by like sixteen runs.” But he, too, was forced to admit: “I really hope he gets to go back to the big leagues soon… I mean, school was supposed to be out last Monday.” 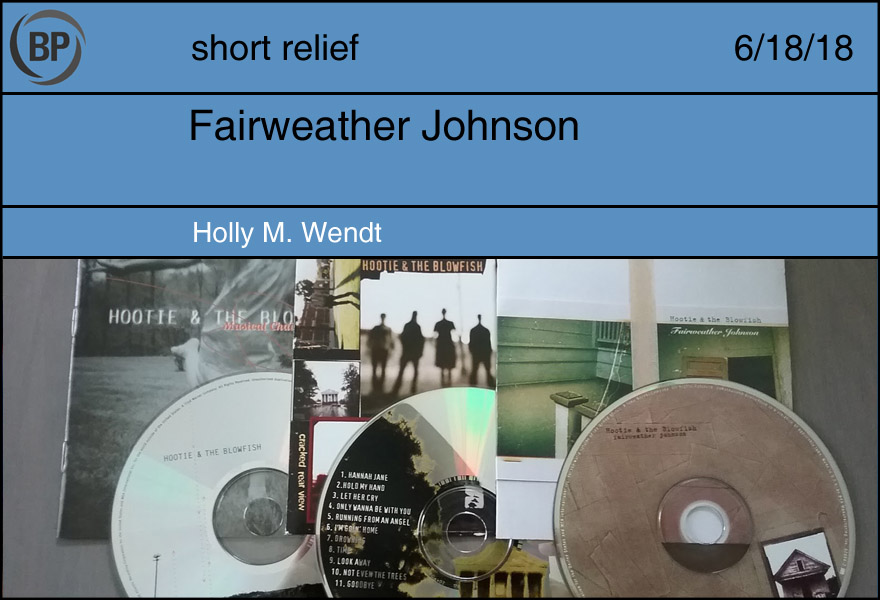 It’s a strange time. The Seattle Mariners are more than mere contenders in the AL West, and the NL East has seen both the Phillies and the Braves in the lead, like some broken mirror-verse of the 1990s. We’ve seen this before—but differently, but it wasn’t supposed to happen now, but not really like this at all. Maybe it’s my fault; I’m still listening to Hootie & the Blowfish albums, and maybe that’s what happens when you look back long enough through that cracked rear view.

The title track of Hootie & the Blowfish’s 1996 studio album Fairweather Johnson was never released as a single. The song, frankly, barely qualifies as a song. It’s more an indulgence, a 51-second musical doodle comprising a fairweather fan’s monologue of favorite football teams. The 1975 Steelers get a mention, as does Washington in 1983, along with Rucker’s own well-documented favorites, the Miami Dolphins. The song’s caveat is that the adulation only applies when the team is performing well.

This is the point at which it becomes clear that “Fairweather Johnson” is clearly a send-up; any child of the 90s who had “Only Wanna Be With You” tattooed on their eardrums by constant radio play (and its absolute deliciousness as a piece of pop music candy) knows that Rucker is deeply emotionally invested in his Dolphins fandom. Through tears and otherwise, it’s teal and orange all the way.

While Rucker waxes on about football, another band member dives in to laud the 1995 Atlanta Braves. By the time the album was recorded—late in 1995 for its April 1996 release—Atlanta had already won the World Series.

“Fairweather Johnson” reveals itself as a song about surety: it’s easy to love not only what is successful, but what has already been successful. Love greatness after it’s already been great—that’s safe passage in dangerous waters. The song also dissolves into laughter at its end: the band is having fun with this absurd little ditty, complete with falsetto touches, but also making fun of the very idea.

It’s 2018. The current baseball season is not yet halfway complete, and Darius Rucker is back on the charts—solo, in country. Darius Rucker, who once thought he might be a sportscaster and who spent a significant portion of the 90s protesting that he was not Hootie and the rest of the band did not equal “the Blowfish,” is still on my mind. When the season’s complete, it will feel easy to look back and say I saw what was coming, but I hope it’s not too clear.