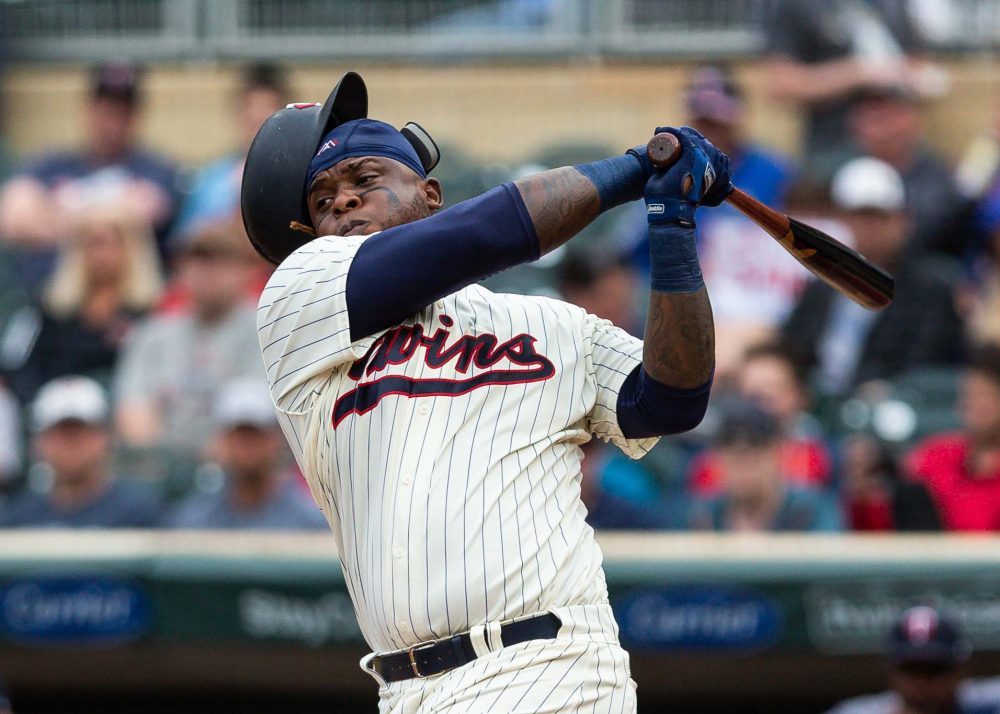 One year ago today Miguel Sano was hitting .292/.391/.589 for the Twins to rank fifth among American League hitters in slugging percentage. Three weeks later, the 24-year-old third baseman made his first All-Star team, coming off the bench to produce the Midsummer Classic’s first run with an RBI single. Sano seemed well on his way to living up to the considerable hype as a former big-money international signing and longtime consensus top-25 prospect.

Since last year’s All-Star break Sano has hit .218/.289/.417, and if anything it’s looked even uglier than that. During that 11-month span he’s also suffered a season-ending leg injury that required offseason surgery to permanently insert a titanium rod, been the subject of a lengthy MLB investigation following sexual assault allegations, and received widespread criticism for his perceived lack of conditioning. And yesterday the Twins demoted Sano to the minors, sending him all the way down to Single-A.

Whenever an established major leaguer is demoted to Single-A rather than Triple-A or Double-A, it raises eyebrows and makes it easy to assume the move is somewhat punitive in nature. Twins officials deny that here, at least publicly, insisting they’re sending Sano to Fort Myers, Florida because it’s home to their spring training complex and year-round facilities in addition to their High-A affiliate. Fort Myers is basically the organization’s non-Minnesota headquarters, and the Twins often choose to send veteran players there to rehab injuries.

“We can do a lot of things with the facility we have there, around strength and conditioning and the work you can do from that side,” Twins chief baseball officer Derek Falvey told Phil Miller of the Minneapolis Star Tribune. “We felt like that was the most supportive environment for what we’re going to try to achieve.”

Of course, both things can be true. Sano’s struggles aren’t likely to be cured by a couple weeks facing Triple-A pitching, and if the Twins believe he needs the equivalent of a full system restore then Fort Myers is the best place for that—hot-take inducing “demoted to Single-A” headlines or not. None of which means the Twins aren’t frustrated with Sano, on and off the field. Sano, for his part, said all the right things when speaking to the media yesterday, doing a solid @dril impression with a nearly verbatim “I’m not mad, I’m happy” quote. 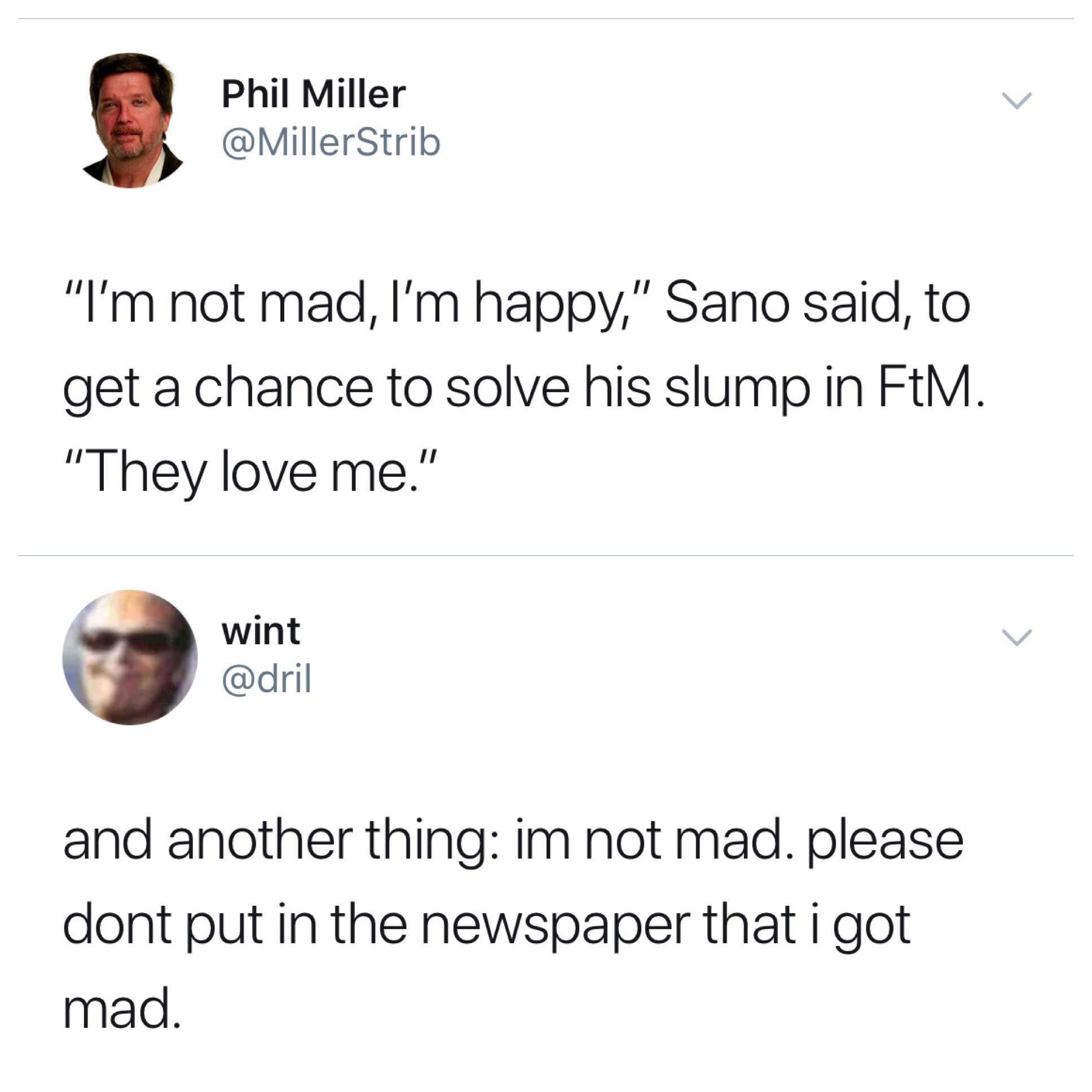 “Sano is fat” has become the go-to explanation for his struggles, but I continue to think that’s too simplistic and, ultimately, just not telling a full, accurate story. For one thing, last year’s leg injury was the result of a foul ball to the shin, which is something players in much better shape than Sano have struggled to come back from. Beyond that, Sano being huge is anything but a new development. He was huge when the Twins signed him in 2009, he was huge when he debuted in 2014, and he was huge when he made the All-Star team last year.

He certainly carries more weight on his 6-foot-4 frame than the Twins would like, and no one is going to argue that getting in better shape is a bad idea, but in terms of body types Sano hardly resembles Bartolo Colon, Pablo Sandoval, or even Twins teammate Lance Lynn. Baseball history is filled with huge and/or out-of-shape players having long, successful careers, and for each of those players their weight was inevitably blamed whenever they struggled or got hurt. If any fan base could understand that, it should be one that loved watching Kirby Puckett and Kent Hrbek, and one that hated losing David Ortiz.

It’s an easy target and not totally devoid of merit, but the notion that losing 25 pounds would cure what ails Sano strikes me as flawed. It would be great if a better diet and some cardio could get Sano back on track, but unfortunately for the Twins it’s probably not going to be that easy. Sano should make every effort to get in better shape, but for that to matter he also needs to show that he’s fully recovered from major leg surgery. Even to the untrained eye it’s clear that Sano has changed his batting stance and swing mechanics, relying less on his legs and more on his upper body. More than anything else, that seems to be what’s in need of rebuild from the ground up—literally.

Sano suffered his initial leg injury on August 19 of last year. Less than a week earlier, as part of our Baseball Prospectus Night at Target Field event, I asked Twins general manager Thad Levine about Sano. Ten months later, his answer now reads like it was given 10 years ago.

I’m really encouraged with Miguel Sano. … And I will tell you, he wants to be great. This is a guy who has an amazing amount of energy, loves the game of baseball, is smiling from ear to ear. Leaders come in different shapes and forms, but I’ll tell you, from an energy standpoint, this guy’s love of the game is palpable and will get us through a 162-game season. That, and he also can hit the ball a very, very long way.

That same type of praise has understandably been nearly impossible to find this season.

It’s worth noting that even when things were going great for Sano—when he was healthy, playing like an All-Star, and no one seemed to care about extra pounds—his skill set raised questions about his long-term ceiling. Sano arrived in the majors as one of the most extreme Three True Outcomes hitters of all time, grinding out deep counts—and racking up shocking strikeout and walk totals—in search of tape-measure homers. However, in the years since then his strikeout rate has continued to rise, topping 40 percent this season, but his walk rate has dipped to the point that he can no longer be classified as particularly patient.

It can seem like a subtle difference. Sano is going to strike out a ton no matter what, and for some people it’s hard to look past the whiffs to see other changes. However, the thing that makes a high-strikeout slugger worth building a team around is the ability to lay off bad pitches, work counts in your favor, pounce when pitchers make mistakes, and accept walks when they refuse to give in. It’s not the strikeouts themselves that are the most worrisome—they’re just a type of out, after all—it’s the number of outs being made, and by extension the number of walks not being drawn.

When the plate discipline vanishes it’s not simply enough to swing hard and hit the ball over the fence 30 times per season, particularly in an era when power by itself has never carried less value. Somewhere along the way the walks started disappearing for Sano, leaving only the strikeouts and homers, and those two skills aren’t hard to find these days. They’re especially easy to find at first base or designated hitter, where Sano has always been assumed to be headed even while sticking at third base for longer than expected.

Perhaps it was inevitable that Sano’s extreme Three True Outcomes approach would cease allowing him to thrive once pitchers made adjustments. Perhaps his inability and/or unwillingness to make adjustments of his own played right into their hands. And perhaps his poor conditioning exacerbated the situation. Or maybe he was on a perfectly good, sustainable path, as evidenced by last season’s excellent first half and All-Star selection, before a major injury knocked him off track.

Untangling the details of Sano’s rise and fall is incredibly tricky, and there may never be one “right” answer. All of which is why he’s now in Fort Myers, Florida instead of Minneapolis, Minnesota, and why the Twins are hoping to build him back up 11 months after he was on top of the world.

You need to be logged in to comment. Login or Subscribe
ChicagoOriole
I mean John Kruk wrote a book entitled "I ain't an athlete, Lady..." After all, he was a professional baseball player. So yeah, Sano has a lot of company. Now, being a young player who had a really good half that could either not stay in his happy place, or was figured out by pitchers, happens to thin players too. Look at Byron Buxton.
Reply to ChicagoOriole
Fred Bellemore
Two years ago Rosario got sent down for stealing third base. Last year Berrios had to start 7 or so games in balmy Rochester in April and May. Sano is a scapegoat, he could easily work things out in the majors. It’s funny certain players on the Twins get chosen for this type of disciplinary action.
Reply to Fred
Timothy Bishton
Great article (unfortunately) Aaron.
Reply to Timothy