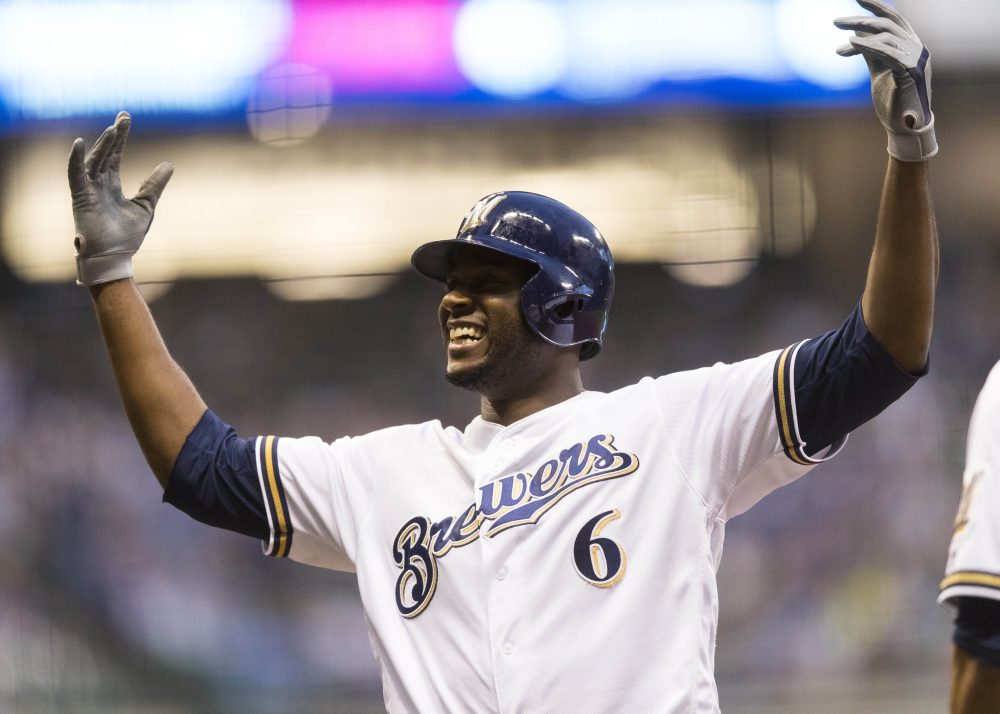 The Cubs regained first place in the National League Central on Monday for the first time since the beginning of May. They did so by virtue of their eighth victory in nine games against the Brewers this season.

It didn’t last long. On Tuesday, the Brewers got their groove back, as Chase Anderson stifled the Cubs’ offense in seven innings of work, allowing just one hit and two walks while striking out six in a 4-0 Milwaukee victory.

It was a surprising result on a few different fronts. For one, the Brewers beat the Cubs, something you’ll know, if you’ve been paying attention, that they’ve had trouble doing this season. For another, they scored four runs against Tyler Chatwood despite the fact that he kept the ball mostly in the strike zone.

The 28-year-old, who had walked a league-leading 56 (against 53 strikeouts) entering the night, issued only two free passes, which meant Milwaukee had to actually swing their bats to score runs. Oh, and utilize sme crafty baserunning.

That wacky, successful rundown set up a Travis Shaw two-run double. It was Shaw’s second two-run double of the night, meaning he drove in all four Milwaukee runs, and the Brewers are back in first place. At least until tomorrow. Maybe.

Quick hits
There are several close division races right now, which maybe isn’t that surprising considering it’s only June 13. But what is surprising is the Seattle Mariners continuing to outpace both the Houston Astros and Los Angeles Angels. On Tuesday, they overcame Mike Trout doing Mike Trout things.

This is, of course, nothing new for Trout. Not ever, really, but particularly in Seattle.

Mike Trout, not a Mariner, is the first player to have consecutive multi-HR games at Safeco Field.

It was the Mariners’ third straight win and eighth in their last 10 games, which is good enough to keep a half-game advantage over an Astros team that has won six straight. Both Houston and Los Angeles have better run differentials, which could yet prove meaningful in what’s become a much more interesting race than expected at the beginning of the season, but I checked the rule book and Seattle doesn’t have to give any of their runs back regardless of what their third order winning percentage says.

On the subject of surprising first-place teams, the Baby Braves are still there, winning Tuesday on the strength on their babiest of players.

Sure, it was against the Mets, but another stellar Mike Folynewicz performance (five shutout innings with zero walks and six strikeouts) pulled the Braves a game ahead of the Nationals. That Albies kid? He’s special.

Ozzie Albies has 2 career grand slams and he's only 21.

The Braves were able to do that because the Nationals lost their second straight on the same day their general manager, Mike Rizzo, called out the embarrassing anonymous comments an executive made against his star, Bryce Harper.

Harper left the losing effort for precautionary reasons after being hit twice, and the Nats’ offense couldn’t muster anything against CC Sabathia, and Didi Gregorius turned back the clock to … well, April.

Stop me if you’ve heard this one before: The Dodgers placed a pitcher on the disabled list.

The Dodgers are placing Walker Buehler on the disabled list with a microfracture in his ribs. It’s retroactive three days.

Luckily for them, they have plenty of established stars to keep them afloat like *checks list* Yasiel Puig (sure), Cody Bellinger (OK) and *squints* … Max Muncy?

Both of the starting pitchers in Tuesday’s Phillies-Rockies game struck out 10 batters. But only one really pitched like an ace.

The 5-4 victory was only close thanks to a ninth-inning rally against the bullpen, but the Phillies’ offense staked their ace to an early lead Aaron Nola wasn’t about to relinquish.

The Tigers have been more competitive than expected this season, but on Tuesday got some rough news. Miguel Cabrera is out of the season after rupturing a tendon in his arm. Cabrera’s injury doesn’t do a lot to harm a team that wasn’t going anywhere in the first place, but one has to wonder what’s next for a player who was arguably the best hitter in the game just a few years ago and is still owed $154 million over the next five seasons. The extension Detroit gave their star first baseman was always going to look bad in the end. It appears the end may have started.

Defensive Play of the Day
I mentioned the Baby Braves earlier. Albies provided the offensive fireworks but 24-year-old Johan Camargo kept the game within striking distance early with a highlight of his own.

Looking ahead to Wednesday

Jacob deGrom and the Mets take on Mike Soroka and the Braves, which pretty much guarantees a deGrom gem but a Mets loss. Chris Sale was bested by his former team last week despite still pitching well, and will get another shot at a cellar-dwellar with an afternoon start against the Orioles and something called Yefry Ramirez. Another ace, Gerrit Cole, is on the hill in Oakland, and Seattle looks to stay in first place with the surprising Marco Gonzalez taking on the Angels and Garrett Richards.