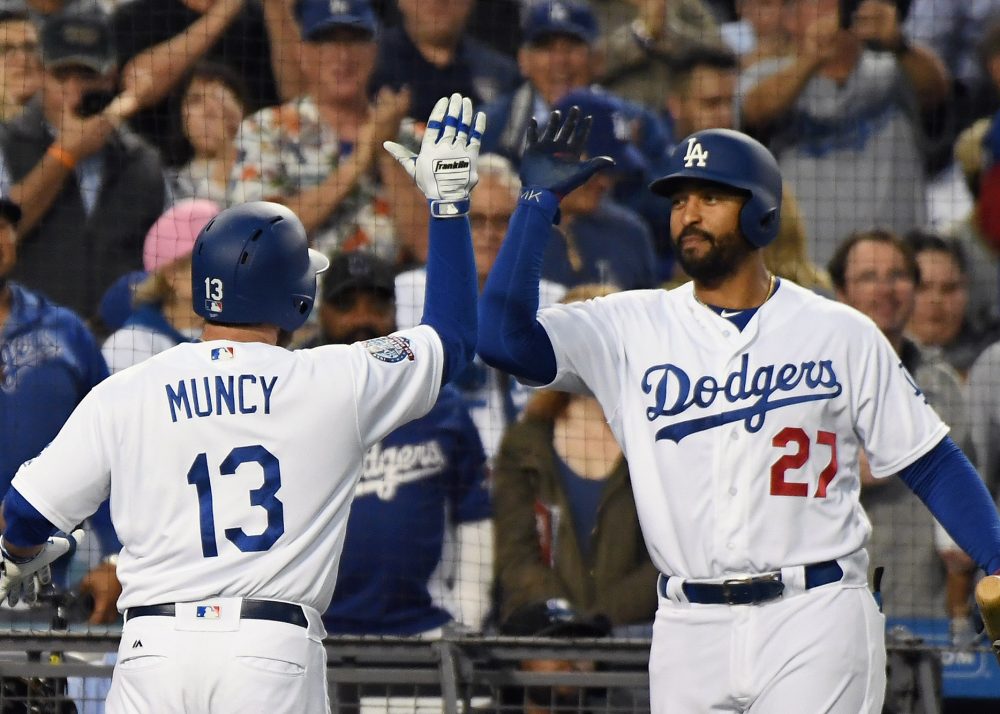 As we near the midpoint of the 2018 season, six hitters with at least 150 plate appearances have out-performed their 90th percentile PECOTA projections by at least 75 points of OPS (through Monday). As you’ll see below, they come in all different shapes and sizes—stars becoming superstars, former stars resurrecting their careers, post-hype prospects breaking out, journeymen thriving sans any expectations whatsoever.

However, five of the six hitters seem connected by a common trait, which is that they’ve possessed high-level plate discipline and/or strike-zone control regardless of their overall performance, and have found a way to maintain that approach while adding significant power. Perhaps that’s just a coincidence, but maybe it speaks to the current MLB-wide explosion of strikeouts and homers, and which players are particularly well suited to adjust their games to take full advantage of the changing environment.

PECOTA was already smitten with Betts before this season, projecting him to be baseball’s third-best all-around player in 2018. That included a 90th percentile hitting projection of .336/.403/.556, which would have topped his previous career-best OPS by 62 points and would have ranked as the fourth-highest OPS by a right fielder in Red Sox history. And now that projection looks downright quaint compared to what Betts is actually doing at age 25. He leads MLB with a .699 slugging percentage and, despite being limited to 54 games by injuries, has 18 homers after totaling 24 homers in 153 games last season.

Betts has a 1.118 OPS. Prior to this season, he’d never had a single month with an OPS that high and had topped a 1.000 OPS in a month twice. The two best months of Betts’ career were April (1.173 OPS) and May (1.200 OPS) of this season. His batted-ball profile has changed considerably, with huge increases in pulled pitches and hard-hit balls. Betts’ pull percentage was middle of the pack from 2014-2017, ranking 136th out of 289 hitters with 1,000-plus plate appearances. This season he ranks sixth, while also jumping from 88th to 35th in hard-hit rate. Within that power surge, Betts continues to control the strike zone with a 31/27 K/BB ratio and has even tacked on 13 steals in 15 attempts for plus value on the bases (when he’s not just jogging around them).

Nimmo’s excellent on-base percentage isn’t a surprise—PECOTA projected the 25-year-old outfielder for a .352 OBP at the 50th percentile and a .401 OBP at the 90th percentile—but the power he’s shown this season is certainly unexpected. Or at least it stopped being expected. Back in 2013, following Nimmo’s first full season in the minors, his player profile in the 2013 BP Annual began: “Nimmo’s advanced approach at the plate is extremely impressive in light of his age and his background.” Four years later, after he’d reached Triple-A, his 2017 BP Annual comment started: “Nimmo has yet to discover his in-game power stroke, and time is running out. … Nimmo was expected to grow into a power-hitting corner guy. Instead, he’s stuck in center field way longer than expected and turned into a contact machine.”

His power finally arrived, just in the nick of time. Nimmo already has 12 homers and 26 total extra-base hits in 174 at-bats, compared to six homers and 19 total extra-base hits in 250 at-bats as a big leaguer coming into the season. Even in the minors Nimmo never showed this kind of power, homering 17 times in 650 at-bats playing at hitter-friendly Triple-A Las Vegas. He was briefly demoted back to Triple-A in mid-April and started just six of the Mets’ first 29 games, but now Nimmo leads the National League in OPS and seems likely to be an All-Star without even appearing on the ballot. In three seasons as a big leaguer, Nimmo’s fly-ball rate has increased from 28 to 32 to 45 percent, and his hard-hit rate has seen a similar progression from 28 to 35 to 44 percent.

All things considered, PECOTA already liked Muncy quite a bit too. Signed to a minor-league contract by the Dodgers a month into last season after being released by the A’s, he was a 27-year-old career .195 hitter in the majors who’d spent most of the past three seasons at Triple-A. PECOTA projected Muncy to hit .235/.342/.412, which is solid role player territory for someone with defensive flexibility, and his 90th percentile projection was .282/.388/.496. Much like Chris Taylor last season, Muncy worked his way into a spot on the Dodgers’ roster and then hit his way into an unlikely prominent role.

Muncy has talked about how he “made a lot of mechanical adjustments” after being released, realizing things had to change. He’s always been a patient hitter, but since joining the Dodgers organization last year he’s been able to tap into the power potential that he hadn’t shown consistently since Single-A. He hit .309/.414/.491 in 109 games at Triple-A last season, but was not among the 26 different position players to appear in a game for the 2017 Dodgers. Now he leads the 2018 Dodgers in homers (13), on-base percentage (.386), and slugging percentage (.599), ranking third among National League hitters in OPS. Los Angeles out-spends nearly every other team, but they’re also making a habit of finding key contributors like Taylor and Muncy via scouting and coaching.

Muncy’s first-half breakout came out of nowhere and so has Descalso’s, except it’s a different kind of out of nowhere. He’s a 31-year-old veteran of nine MLB seasons and not once in the previous eight years was he even an average hitter. Descalso hit a combined .240/.318/.359 in 2,276 plate appearances from 2010-2017. Among the 268 hitters with at least 2,000 plate appearances during that span, he ranked 240th in batting average, 251st in slugging percentage, and 230th in isolated power. Descalso did always have a decent eye, drawing walks despite pitchers never being afraid to throw him strikes. And now, suddenly, pitchers have reason to be afraid to throw him strikes.

He’s hitting .278/.379/.528 with eight homers in 214 plate appearances, leaving him just two homers short of his career-high. There’s some helium in his numbers, thanks to a .336 batting average on balls in play that’s 44 points above his career mark, but the improved power comes attached to purposeful, quantifiable changes, as detailed last month by Nick Piecoro, the excellent Diamondbacks beat writer for the Arizona Republic. You can trace Descalso’s power development by way of his gradual climb in strikeout rate, isolated power, pull rate, and hard-hit rate.

He gradually traded some contact for more forceful, pulled power, and then this season the gradual climb gave way to a huge jump that also includes his fly-ball rate rising to 47 percent compared to his 36 percent career rate. “I’m aware of what my career numbers are,” Descalso told Piecoro. “Over the course of my career, I felt like I had more in there, so maybe I’m finally tapping into that.” If he hits anywhere close to this well in the second half, Descalso is going to be a fascinating free agent test case this offseason.

Ramirez is someone PECOTA was decidedly not high on coming into the season, in large part because projection systems can have trouble knowing how to view players like him. Ramirez reached the majors at a very young age (20) and without a great minor-league track record (.272/.325/.349 at Double-A the year he was called up). He then proceeded to struggle for two years in the majors, hitting .239/.298/.346 in 180 games. Ramirez broke out in 2016, hitting .312/.363/.462 at age 23, but PECOTA was still hung up on his unimpressive track record.

Even after a 2017 season in which Ramirez played at an MVP level as a 24-year-old, PECOTA projected him to hit .287/.345/.469. That’s still damn good, of course, and more or less in line with what he did in 2016, but had Ramirez’s career path gone a little differently PECOTA would have seen much bigger things in 2018. He’s now doing much bigger things, hitting .289/.385/.604 with 21 homers, 20 doubles, and more walks (42) than strikeouts (36) in 70 games. And despite seemingly being around forever since he debuted so early, Ramirez is just 25. He’s a full-blown superstar, a switch-hitting middle-of-the-order monster who plays plus defense anywhere in the infield.

Once upon a time, the idea that Kemp would be hitting .333/.374/.579 for the Dodgers as a 33-year-old wouldn’t have seemed crazy at all, but it certainly qualifies as that now. His star had fallen so far that Kemp was traded twice in salary dumps, the second of which brought him back to the Dodgers while he was still on the eight-year, $160 million contract they originally gave him in 2012. Kemp’s plus power remained throughout all the passing around of his contract, keeping his overall offensive production decent, but injuries, aging, and poor conditioning made him borderline unplayable defensively and a constant double-play risk.

He hit .270 with a .470 slugging percentage for the Padres and Braves from 2015-2017—above-average numbers even if they can’t compare to his Dodgers prime—but he also grounded into 59 double plays and rated 15 runs below average in the outfield. Now he’s back where it all started, and has played so well—and looked so good—that he forced his way back into the Dodgers’ plans as much more than a payroll-balancing contract. Pedro Moura of The Athletic wrote a great article about Kemp’s turnaround, which includes this amazing quote from Ron Washington:

He loves the game of baseball, but he loves it when he’s healthy. He hates this sonuvabitch when he’s not. He expects a lot out of himself, and a lot of people expect a lot out of him. When he’s not healthy and he’s not producing the way he knows he’s capable of producing, he’s miserable. But he’s healthy now, man. So, enjoy it, really. Because if he gets hurt, he’s gonna be fucked up again.

I can’t possibly add anything here that would improve upon that quote, so I won’t even try.