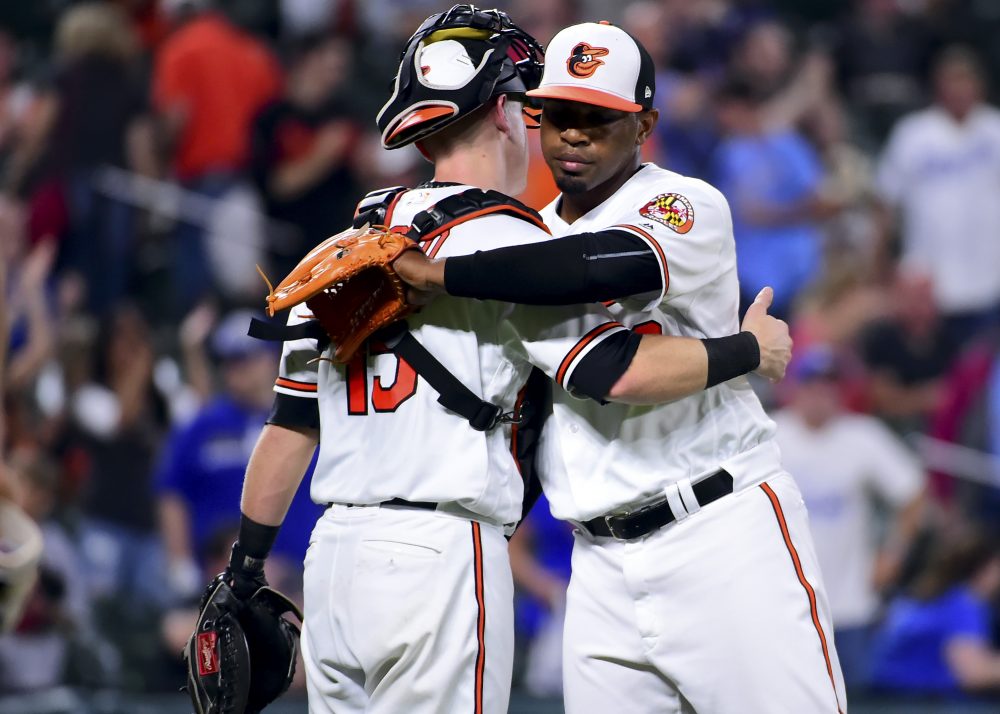 On Saturday, the Orioles were playing the Blue Jays, and they were losing just as they had lost the previous two games of the series, just as they had lost 43 of the 62 games they’d played in the season. Losing has become a familiar habitude for the Orioles lately. And here, another loss seemed to be making itself inevitable: After rallying back late from a 2-0 deficit to tie the game at 3-3, the Jays had the bases loaded in the bottom of the 10th. There were two outs.

It was up to reliever Mychal Givens, who had created this mess in the first place, to get that final out. After striking out Teoscar Hernandez to start the inning, Givens issued a five-pitch, not-even-close walk to Justin Smoak, then a single to Kendrys Morales. He got Kevin Pillar to fly out quickly, giving a moment of reprieve.

Then he hit Randal Grichuk, batting .157 with a .627 OPS, to load the bases. Luke Maile came up to the plate, and I knew what was going to happen. Not just what I wanted to happen—I wanted the Jays to win, of course—but the specific and inevitable outcome. Givens had been fighting his command all inning. I felt like I knew, and I felt like he knew, what was about to happen. He needed to throw strikes, and he couldn’t throw strikes.

If it wasn’t obvious on Givens’ first pitch to Maile, it became obvious on the second. It became even more obvious on the third. Four straight balls, and the Jays had won. Justin Smoak trotted slowly home. The Jays, elated at finally having put together a modest winning streak after their miserable May, swarmed around home plate, celebrating Maile’s heroism; Givens, eyes downcast, face devoid of feeling, disappeared into the clubhouse. 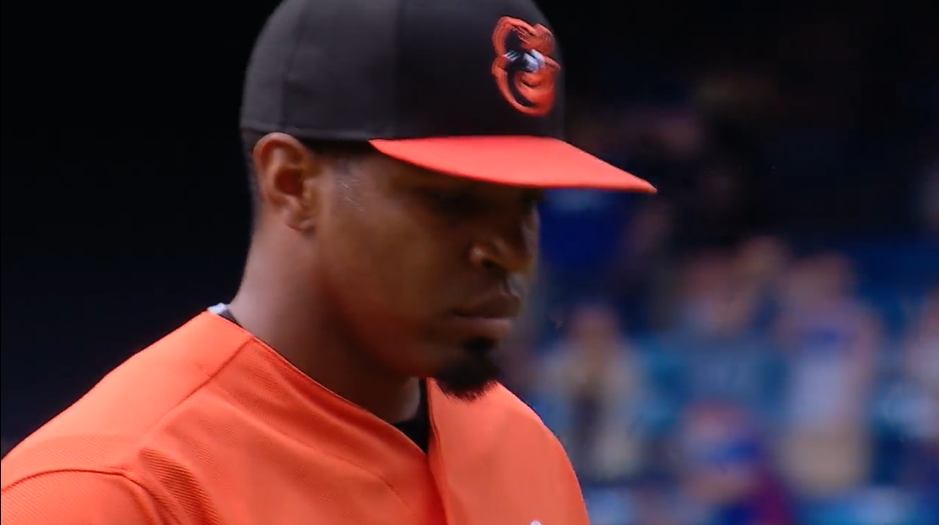 I jumped up from the couch, cheering, my mood lifted for a minute. The broadcast ended. I sat back down. By the time I woke up on Sunday, the Jays were already leading the Orioles 9-1. I didn’t bother watching.

It sounds so easy. It should be easy. As easy as saying no when someone asks if you’re fine. As easy as accepting a hug or a shoulder to cry on. It’s not easy, for some reason. For some reason it is impossibly difficult: as impossibly difficult as it is simply to live, to do the things you should be able to do, the things you know you are capable of doing. Reach out, reach out. It feels almost like a taunt.

You read the stories. They are not distracting. Everywhere, every day, systematized fear. People are dying. Reach out. Even if you want to, you won’t. Turn off the notifications; turn off the phone completely. Try to find somewhere to hide. There’s nowhere, because there never is. You’ve done this so many times before. Shouldn’t you know this already?

I had to force myself to turn on a baseball game Monday. I think there may be a connection missing between where my brain tells my body to do something and where my body actually does it. Something has been lost. It took me half an hour to hit the button on the remote. The Jays were on. They lost.

I looked at the clock. There was still around half an hour until the Mariners game started. I turned on the game between the Red Sox and the Orioles—it was tied, 0-0, going into the top of the 11th. The Red Sox are, obviously, a much better team than the Orioles; the odds were in their favor. Still, I figured, what were the odds of the Orioles even holding the Red Sox scoreless for 10 innings in the first place? There had to be some hope.

Mychal Givens was pitching for the Orioles again. Again, he couldn’t throw strikes consistently. Put into the game with two outs and two men on, he walked J.D. Martinez to load the bases. And as Mitch Moreland stepped into the box, I felt that same feeling: the one I’d had when Maile had come to bat Saturday.

You are an observer in your own life. You are a passive vessel to whom things happen. Your vision is limited, as though you’re looking through your fingers, even though your eyes are wide open. You want to stand up. You can’t, even though, obviously, you can. You pick up your laptop to talk to someone—you should talk to someone today. People were meant to talk to each other. Open it, you tell yourself. It’s so easy. You’ve done it so many times before. Just reach out, reach out, reach out. You must at least be capable of that.

But you aren’t, even though you are, and you know you are. Every possibility is open to you, and you can do nothing.

Mychal Givens has been a very good pitcher throughout his short major-league career. He was shown himself to be versatile, capable: first in his conversion from shortstop reliever, then in his embrace of a variety of roles in the bullpen. When he made his debut in 2015, he dazzled—a 1.80 ERA in 30 innings, a 32.5 percent strikeout rate to go with a 5.1 percent walk rate. He was excellent in his first full season in 2016, excellent again in 2017.

He threw three fastballs. Moreland swung and missed—not even close, his body contorted, one knee sinking into the ground. Givens leaped in the air, pounded his glove. He roared as he walked off the mound, the opposite of his downcast walk off the field on Saturday. 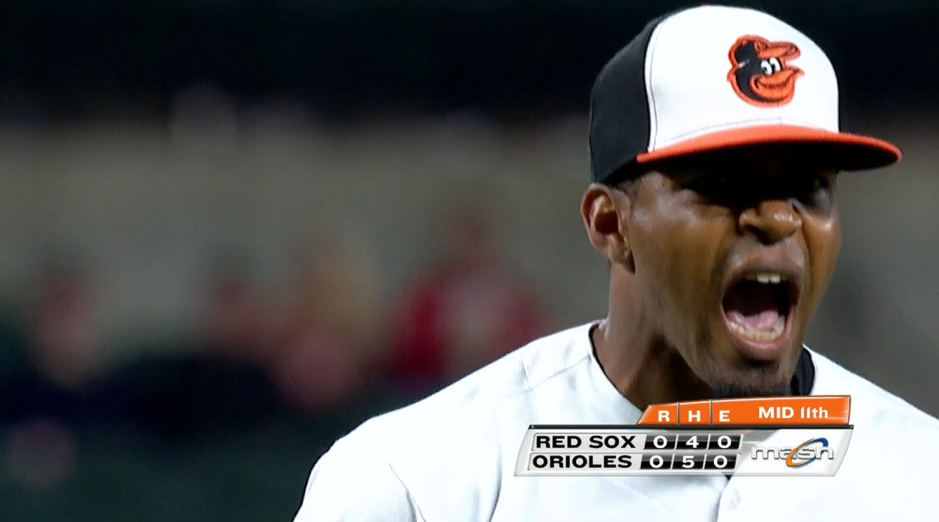 I felt his relief: the sharp rush of defiance.

You need to be logged in to comment. Login or Subscribe
Todd Treichel
Good piece. In a winning season, this would be a little puzzle for the player and the team to solve, a mild concern. In a hopeless season, it must feel like a hole he might never find the bottom of.
Reply to Todd
John Farrell
Funny, I've always liked Givens and never really understood why he wasn't closing in Britton's stead. I guess this is why. I saw the Moreland AB, but I had serious mixed feelings. I had just activated Brad Brach and Givens was the only thing standing between two more earned runs against my ledger. Brach, who had pitched well in his first inning, had a mini meltdown of his own during his second inning of work and had left Givens two baserunners to deal with. On top of that backdrop I owned the slumping Mitch Moreland, who is about ten days removed from being awarded the 1B job due to the removal of Hanley Ramirez from the Red Sox Roster. I could have used a hit, but I also didn't want the runs to score. Typical reason everyone hates fantasy players I guess. I decided I wanted Givens to win the battle. I only needed Brach until Andrew Miller gets back and or until Zach Britton can take over as closer. Brach had 14 walks in 23 innings going into this game; very Dellin Betances like and not very appealing. I didn't want him getting stuck with those two earned runs. Givens was going to be lifted after the Moreland AB if he walked in a run I figured (that may not have been true, but it's what I thought at the time...Britton was warming) so naturally Givens got behind 3-0 and I was squirming. Moreland rightfully took a strike, but the second strike was right down Broadway. If he hadn't been slumping he probably would have hit that pitch hard. The 3-2 pitch was ball four, but Moreland swung over the top of the breaking ball down and in and looked bad doing it. Givens had survived, Brach was free and clear of damage and Moreland's floundering continued. I wanted the Red Sox to lose, but that never materialized. The next night, last night, Britton walks 3 in his debut, which I had to assume as his owner too. Luckily he didn't give up a run, but walks are always a killer. Anyway, interesting how many sets of eyes are looking for different outcomes when a hitter faces a pitcher, particularly with the bases loaded. This game was kind of a microcosm for my fantasy season as I owned Steven Wright, who started the game for Boston as well. I got nearly 9 shutout innings between Wright and Brach, not neither a win or a save. Dylan Bundy got denied as well. Then Boston ends up winning in 12 as you point out above. I've had worse fantasy days, but this game kind of sucked. Funny that you zeroed in on this at bat for completely different reasons.
Reply to John