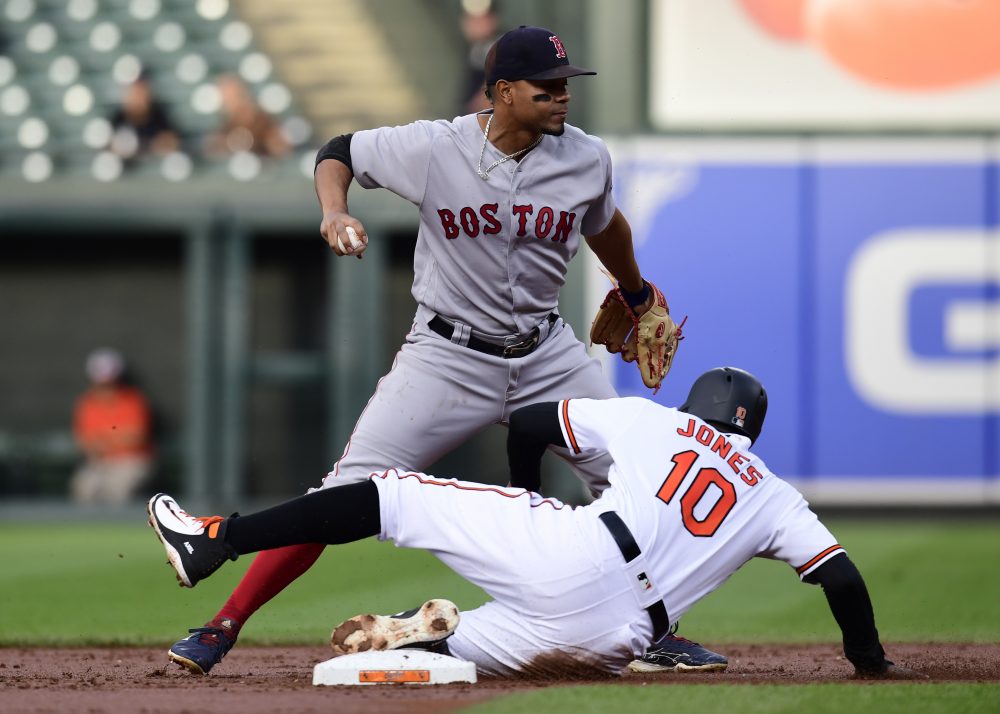 The definition of dreadful is causing or involving great suffering, fear, or unhappiness; extremely bad or serious. The Baltimore Orioles are dreadful this season. Heading into Monday night’s game against the mighty Red Sox, the Orioles were 19-45, coming off a four-game sweep at the hands of the Blue Jays and poor Chris Davis’s batting line was .153/.233/.232 with 83 strikeouts.

So, it seemed the odds were stacked against them but their starter Dylan Bundy and managed to toss eight shutout innings.

Of course, the Sox countered with Steven Wright, who was making his second start of the season and went 6 1/3 scoreless innings.

Both teams blew scoring chances late. In the bottom of the 10th, the O’s had two on and two out but couldn’t get the guy in scoring position home while the Sox blew a bases loaded chance in the top of the 11th. Mitch Moreland worked the count to 3-0 against Mychal Givens who walked the bases loaded the previous at bat against J.D. Martinez. But Givens recovered and struck out Moreland to end the inning.

Heath Hembree struck out the side in the bottom of the 11th which set up the top of the 12th for the Sox. Givens remained in the game and surrendered a single to Xander Bogaerts and a double to Rafael Devers. Givens then walked Nunez to load the bases and Buck Showalter didn’t bring anyone in.

Then Jackie Bradley Jr. hit his own sac fly to score Devers:

Craig Kimbrel came in to pitch the bottom of the 12th and after walking Craig Gentry, he struck out Adam Jones, Jonathan Schoop and Danny Valencia to end the game.

Mike Trout hit two home runs against the Mariners—his 20th and 21st on the year. Number 20 came off M’s starter Wade LeBlanc in the first inning.

Number twenty-one was off reliever Ryan Cook in the eighth inning.

His 14th off Andrew Heaney tied the game in the bottom of the first.

Cruz has hit four in the past three games and five in his past six. The Mariners won the game, 5-3 and kept their slim lead over the Astros in the American League West standings.

The Cubs visited Milwaukee and like the Red Sox and Orioles, it took until extra innings for one team to pull away. Unfortunately for the home team, it wasn’t them. After the Cubs finally found someone to solve Josh Hader (he was Jason Heyward!!!???), the game was tied 2-2 heading into the top of the 11th; the Brewers brought in Matt Albers to pitch and well, it didn’t go as planned.

Anthony Rizzo led things off with a towering solo shot to right to give the Cubs a 3-2 lead and then the wheels fell off for Milwaukee.

Madison Bumgarner was ejected from Monday’s game after letting home plate umpire Jeremie Rehak that he didn’t appreciate his calling balls and strikes. But it didn’t matter because he was actually leaving the game anyway.

It still counted as his first career ejection. It was Bumgarner’s second start since breaking his pinky in the last exhibition game of spring. He pitched 5 ⅓ innings and didn’t factor into the decision. He gave up four runs on four hits with one walk and three strikeouts.

Defensive Play(s) of the Day

Ryan Braun made two great plays against the Cubs on Monday night so I’m posting both of them. First, he made a diving catch to rob Anthony Rizzo in the fourth inning.

Then he robbed Willson Contreras of a home run in the sixth inning.

Have yourself a night, Ryan.

What to watch on Tuesday

There’s a full slate of games tonight. The Nationals will be in Yankee Stadium for a two-game series tonight and tomorrow. Tonight, Tanner Roark will be facing off against CC Sabathia. (7:05 p.m. ET)

The Indians will be in Chicago to face the White Sox. The pitching matchup is Adam Plutko against James Shields. Shields is having a rough season. In his last start against the Twins, he gave up seven runs on eight hits. He surrendered three home runs while walking two and striking out six. (8:10 p.m. ET)

Texas and Bartolo Colon will be visiting the Dodgers this week. Colon will be matched up against Caleb Ferguson. Ferguson, 21, has only pitched 1 ⅔ innings so far this season and they weren’t good. He gave up four runs on two hits with three walks and three strikeouts. (10:10 p.m. ET)

You need to be logged in to comment. Login or Subscribe
Robert Hacking
I'm anticipating Chris Davis going on the 10 day DL with a mysterious injury pretty soon.
Reply to Robert
Wyomissing
Small point.. the O's came in at 19-45 because the loss dropped them to 19-46. I only mention this because they've been stuck on 19 wins for almost a week now.
Reply to Wyomissing
Robert Hacking
I was also thinking back to those articles about why free agents weren't signing for big money. How's the Alex Cobb signing look so far? The Chris Davis deal?
Reply to Robert