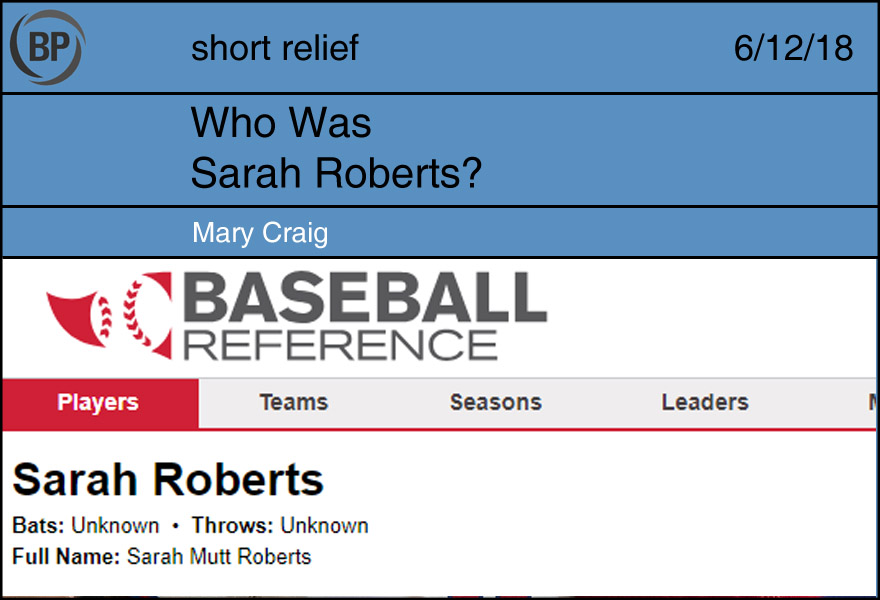 The length of its existence and sheer volume of games make it essentially impossible for one to know everything about the game. Even the things we think we know can be thrown into doubt, leaving a gaping hole where once there was certainty, creating ample opportunity for speculation among the hazy visage of fact. For instance, there were three women to play in the Negro Leagues: Toni Stone, Mamie Johnson, and Connie Morgan. I know this. I have lived many years secure in this knowledge.

And then I stumbled upon uncertainty:

If Sarah Roberts was a woman, she was the first woman to play in the Negro Leagues, a full 26 years before Toni Stone did so. If she was a woman, she must have been a remarkable woman. Maybe she was a young standout player like Connie Morgan, who impressed her male peers with her pitching. Or maybe she was a veteran player who, like Toni Stone, shuffled from tiny defunct team to tiny soon-to-be-defunct team in pursuit of her dreams. Perhaps she became inspired to play baseball by watching Satchel Paige befuddle opposing pitchers with his pinpoint accuracy, or maybe she heard about Jackie Mitchell striking out Babe Ruth and thought if a white woman could do it, so could she.

She was from a small northern city whose overwhelming whiteness never once allowed her to forget the fact that she was visibly different, lesser in the eyes of her neighbors. Or she lived in Missouri, surrounded by a large family who ensured she spent as many nights as possible nestled amongst the other 15,000 fans cheering on the Monarchs. Or maybe she hailed from the West Coast, following Black baseball from afar and playing whenever a team allowed her to join their games.

Sarah Roberts could have been any of these things or likely none of these things. Until we know for certain who she was, she was whomever we need her to be. 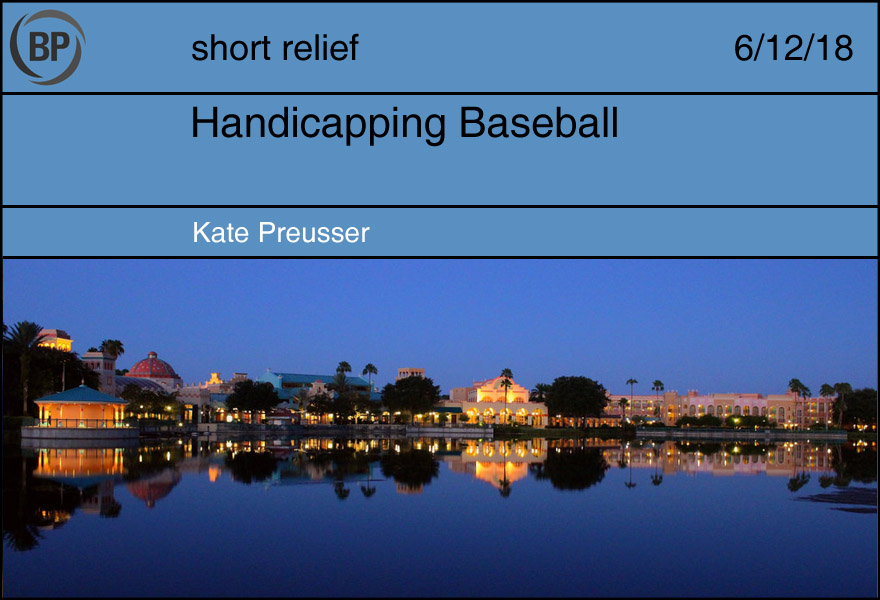 One of the biggest problems in baseball today is the number of teams that are in rebuild mode, leading to games that are laughably lopsided, with bad teams being blasted out of orbit by super-teams with their eyes on the postseason. [Pause as a single orange feather drifts by.] In order to address this problem, MLB has decided to…[sound of giant wheel spinning at MLB HQ]…limit shifts? Sure. But I have a more useful and realistic solution: MLB should take a page from the lengthy rulebook of that hotbed of fast-paced excitement, the game of golf, and institute a system of handicaps.

Now, I have done exactly zero research on how handicaps in golf work, but I know they are, in fact, a thing, and that thing is designed to put your golfer equivalent of the Miami Marlins on the same page as your golfing Red Sox, who, fun fact, have three players who together have as many home runs as the Marlins do as a team. Golf apparently uses a standardized system to come up with handicaps, but baseball detests a standard, so here are some suggested handicaps for some of the more one-sided series coming up over the next few months:

Mets vs. Dodgers:
Instead of the team hotel, Justin Turner is sent to stay in Greenwich with a 24-year-old hedge fund manager’s son named Grayson Gladdington III. Grayson is fond of the phrase “the sun’s past the yard-arm” to indicate it’s time for cocktails, and enjoys the music of Cardi B at all hours of the day, along with doing rafts of cocaine.

Chicago White Sox at Cleveland:
The White Sox are allowed to read one (1) mean tweet about the Cleveland pitcher over the PA system before each at-bat.

Baltimore vs. New York Yankees:
Giancarlo Stanton, Aaron Judge, and Gary Sanchez are all given a pregame meal of a box of shellfish sourced by a fishmonger who’s kind of going through a lot right now? chased by a six-pack of Natty Boh.

Kansas City at Houston:
One week before the series, Kansas City gets to install autoplay videos on every web page accessed by any member of Houston’s organization, on both work and personal devices. The videos, which play at a volume 20% louder than the device’s previous capacity, all freeze two seconds in, then continue the cycle of freezing-and-restarting ad infinitum.

Texas vs. Boston:
J.D. Martinez is only allowed to swing the bat with items Rangers fans bring from home. Over the four-game series he records 14 home runs hit with broomsticks, couch cushions, a 1972 copy of John Fowles’s novel The Collector, a macramé plant holder, a lemon cream pie, and a commemorative coin celebrating John F. Kennedy’s Berlin Wall speech.

Washington vs. San Diego:
Prior to the game, the entire Nationals team is taken to La Jolla for some surfing, then for fish tacos, then to the zoo, where they are allowed to pet whatever baby animals they want. They are then given a bike and the option to ride it to the ballpark, or over the bridge to Coronado for happy hour.

Chicago Cubs at Cincinnati:
The Reds are allowed to call upon Madame Zavania, Cincinnati’s most powerful medium, to haunt the visitor’s clubhouse and call upon the spirits to curse the team that dwells within. Madame Zavania promises this time she won’t get lost.

You need to be logged in to comment. Login or Subscribe
justarobert
In browsing around for information about Sarah Roberts, I came across this article which, as a side note, alludes to an Isabelle Baxter who played for (one of) the Cleveland Giants in 1933. https://homeplatedontmove.wordpress.com/2014/06/21/lizzie-leads-to-charlie/

Also, is it possible that Sarah Roberts and Specs Roberts are the same person?
Reply to justarobert