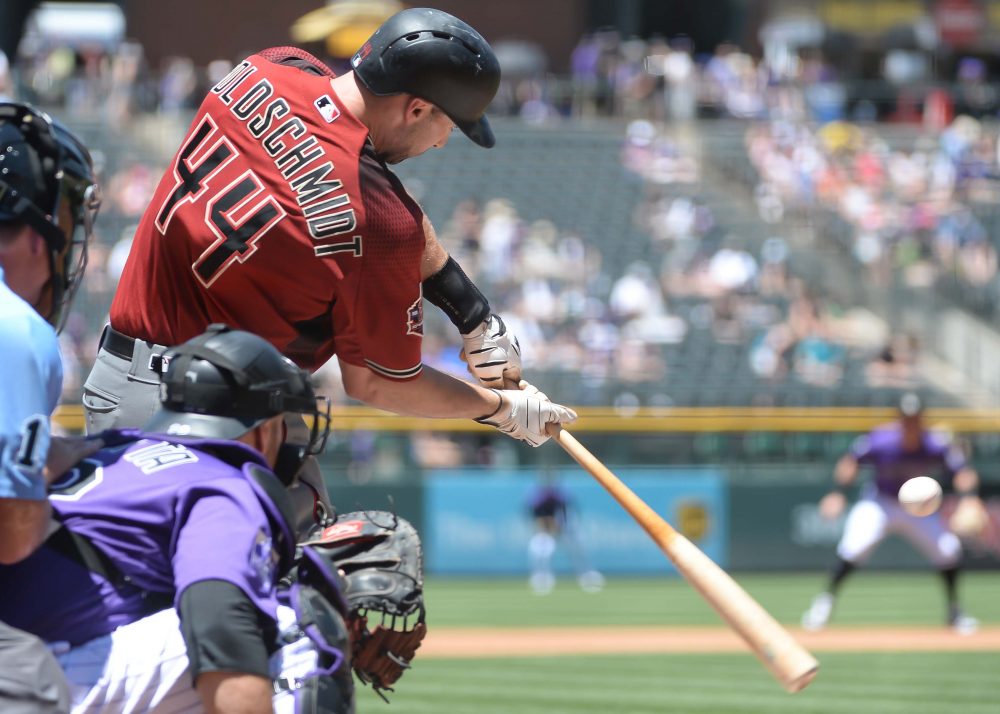 May was not a good month for the Diamondbacks. They went 8-19, had a five-game and a seven-game losing streak. Even worse, their perennial All-Star Paul Goldschmidt was struggling at the plate. During a 24-game stretch, Goldy batted .116. By May 22, Goldschmidt was batting .198. On May 29, he was given a day off while the Diamondbacks were mired in a 2-15 slump that knocked them out of first place in the National League West.

Now? The Diamondbacks are back to winning ballgames—they’ve won 8 of 11—and more importantly, Goldschmidt has remembered how to hit. Arizona rolled into Coors Field and swept the Rockies in three games this weekend. During the sweep, Goldschmidt went on a tear. He homered twice in each of the first two games of the series and he finished the weekend 8-13 with four home runs and nine RBIs.

The Diamondbacks start a seven-game homestand on Monday. They’ll play three against the Pirates and four against the Mets. Both teams are under .500 and the Pirates have lost six out of their last seven series so Arizona will have a chance to continue their winning ways.

On Sunday, Corey Kluber became the first American League pitcher to reach 10 wins. He’s now pitched 99 ⅔ innings this season and has struck out 103 batters. He reached the 100K milestone in the fifth inning of the Indians’ 9-2 win over the Tigers.

Kluber has not only reached the 10 win plateau but he’s also made six consecutive starts without issuing a walk. He’s faced 168 batters in 43 1/3 innings without walking anyone. He’s tied with Paul Byrd who did in 2007 and Addie Joss who did it way back in 1908. The longest streak in the Major Leagues without issuing a walk was 11 games by Kansas City Athletics pitcher Bill Fisher in 1962.

Max Muncy is enjoying hitting the long ball. Muncy now has 12 on the year in only 44 games with the Dodgers—he hit 12 in 109 games with Triple-A Oklahoma City in 2017. He hit a homer in each game against the Braves this weekend.

On Friday, he went back-to-back with Joc Pederson.

On Saturday, he scored the Dodgers’ first run with a solo shot.

On Sunday, he hit a solo shot to extend the Dodgers’ lead to 4-2 in the fifth inning.

Muncy also showed some patience by drawing a bases loaded walk in Sunday’s win against the Braves.

Muncy’s story is like so many others before him; a player who couldn’t quite catch on with other teams who is now tearing the cover off the ball for the Dodgers.

Heading into the weekend, the Padres were the only MLB team without a no-hitter and that fact didn’t change. It almost did. Clayton Richard had a strong start against the Marlins on Sunday. He took a no-hitter into the seventh but Miguel Rojas hit a comebacker past the mound that made it into the outfield grass for the Marlins’ first hit of the game. This is the third time the Padres missed a no-hitter. On April 20, Tyson Ross pitched 7 ⅔ innings of no hit ball against Arizona and on May 15, Jordan Lyles pitched 7 ⅓ innings against Colorado. So the third time wasn’t a charm for the Padres–but maybe the fourth time will be?

It seems that the cure for a reeling team’s ills is to play against Baltimore. The Blue Jays had lost four of five games heading into their four-game series against the Orioles this weekend and well, that didn’t matter. The Blue Jays swept the Orioles and on Sunday, they exploded for 13 runs, led by Curtis Granderson’s six RBIs.

The Blue Jays weren’t the only team to complete a four-game sweep this weekend. The Astros also used the broom against the Rangers, and on Sunday, they scored their winning run on a balk by Rangers reliever Keone Kela. But the thing is, the umps didn’t call it at first. Houston’s manager A.J. Hinch drew attention to it and got the umps to call it. George Springer scored from third and the Astros went on to win, 8-7. Texas’s manager Jeff Banister was not happy after the balk call and was ejected from the game. He told reporters after the game that his problem was that no one on the field originally made the call. He added, “I’ve never seen a non balk called turned over and called a balk.”

The umpires explanation was that Kela didn’t tell anyone he was going out of the windup so they ruled it was a balk. Shouldn’t they have called that all along?

Never nervous Yangervis Solarte made a nifty play to end the top of the second against the O’s on Saturday.

There are eight games on tap on Monday and all of them are at night. Boston rolls into Baltimore for a three-game set. Steven Wright is making his second start of the season. He won his first decision on June 5 after shutting out the Tigers for seven innings. Dylan Bundy will be making the start for the Orioles who are in the midst of a four-game losing streak. (7:05 p.m. ET)

In the NL Central, the top two teams are meeting up for a three-game series in Milwaukee. The Cubs are sending Jose Quintana to the mound while the Brewers are countering with Junior Guerra. (8:10 p.m. ET)

Out west, third place Anaheim is visiting first place Seattle with Angels starter Andrew Heaney looking even his record at 4-4 while Wade LeBlanc is looking for win No. 2. (10:10 p.m. ET)