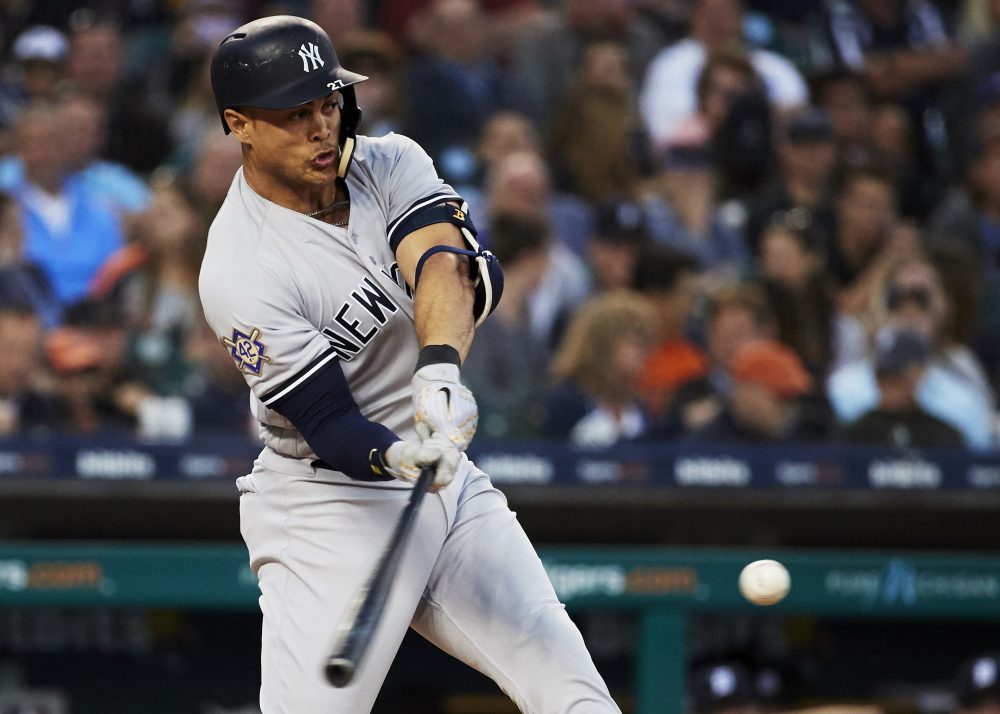 Here’s a fun mental exercise. Which baseball player would you least like to piss off?

Aaron Judge? He’s basically the Colossus of Rhodes and had no trouble wading through the Yankees-Red Sox fracas earlier this year. Rougned Odor? He’s small, but he’s got a good hook and might be a little nuts. Trevor Bauer? He’d send a sharp airborne army after you.

Giancarlo Stanton has to be on that list somewhere. He’s not quite as big as Judge, but really who is? He’s still a musclebound mountain of a man who makes his money by smacking baseballs into the next dimension. His uniforms look like they were fitted for Drax the Destroyer and they barely contain his body. You probably shouldn’t make him really angry.

As you might recall, Fiers was the one who hit Stanton in the face with a pitch a few years ago. He’s the reason Stanton wears that face guard on his helmet. Stanton probably knew Fiers didn’t intentionally throw at him last night. He just had some nasty flashbacks, and man, he didn’t want any more of that crap.

Stanton said as much afterward and, somewhat surprisingly, Fiers complained about Stanton staring at his own home run, calling Stanton’s antics “childish.”

This is small stuff as far as beefs go, but we all like to watch baseball players grouse at each other, and we like it even more when guys like Stanton hit a ball a mile and do a big ol’ bat flip. Plus, it’s much better to retaliate that way and not by ripping Fiers’ arms off like he beat Stanton in sabacc.

The two runs that came from Stanton’s homer would be the only runs the Yankees would score in the game, as they split their double-header with the Tigers.

Remember when the Diamondbacks were good?

Not so much anymore. Of course they’re still in first place because the NL West is an unmitigated mess, but they’re not nearly as imposing as they were in April. The Giants, meanwhile, are just a game and a half out of first place, and the calvary is on the way. More on that later.

It was a big night if you’re a fan of NL West teams putting up seven-spots.

It’s fair to say that Luiz Gohara just didn’t have it, and if he did, the Padres stole it from him and shoved it into the garbage disposal. What is this “it”?

You’re asking too many questions.

It was a pretty limited day on the schedule, which means there weren’t as many chances for sterling defensive plays. So, here’s Dansby Swanson being smooth as butter.

Good news: there’s afternoon baseball today! The White Sox and Twins are playing the first half of their double-header at 4:05 p.m. ET, so you should be able to get at least a few innings in before you leave work. Even better if you’re not on the East Coast. Reynaldo Lopez has had a sneaky good year and will be going for Chicago, while the Twins haven’t officially announced a starter yet.

Once you decide it’s time for evening baseball, check out the white-hot Mariners as they take on the Astros. It’ll be James Paxton and Dallas Keuchel on the mound at 8:10 ET.