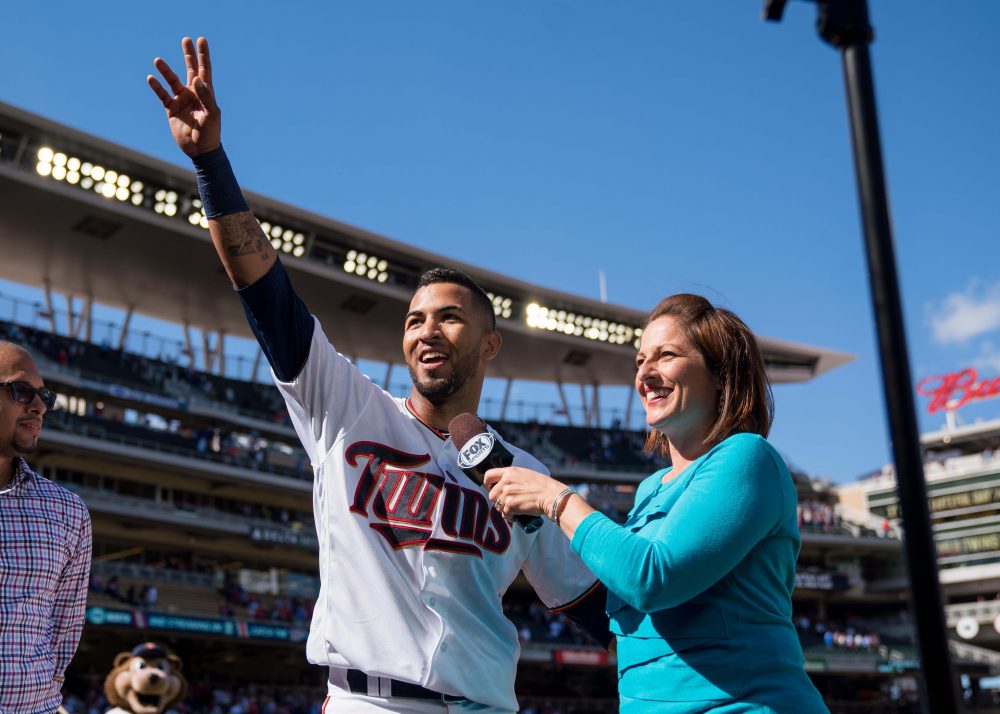 If you’ve played a sport, you know how it feels when your family comes to watch you play. You feel a little more nervous than usual and you feel pressure to perform at a high level. Or at least I did when I played Lacrosse in high school. Since the games were usually after school, my dad never made it, but my mom made it to a few during my illustrious two-year career. I remember one game when my mom was in attendance, I actually scored a goal on a breakaway, but they called it back because the ref said broke the plane of the crease surrounding the goal. It’s 27 years later, and I maintain that the ref was wrong, and I should have had that goal count.

Why am I mentioning this? Because on Sunday afternoon, Eddie Rosario of the Twins had his family (which comes from Puerto Rico originally) in the stands at Target Field and, well, he put on quite a show for his parents, his wife and his three kids. He hit three home runs, including a walk-off home run off Indians’ closer Cody Allen.

Both of Rosario’s earlier homers — a 93.8 mph four-seamer against Mike Clevinger, and a 75.6 mph curve against lefty Tyler Olson — were thrown out of the zone. Only one home run came from a pitch in the zone — Allen’s — and even that pitch was high in the zone. 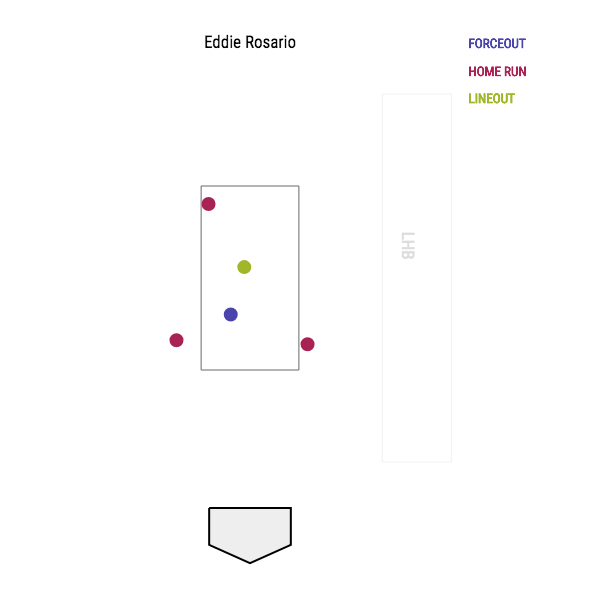 With the score tied in the ninth, Brian Dozier worked a walk against Allen, and Rosario stepped in. Allen threw a 2-1 fastball that registered at 94.4 mph and Rosario, who said after the game that he was looking to hit a home run, did exactly that.

The Twins won an exciting game and Rosario put on quite a show for his family. And in a fun twist, this isn’t the first time Rosario has hit three home runs in a game. He also accomplished the feat on June 13, 2017 against Seattle and with his family in attendance that day as well. Rosario became the 34th player to hit three home runs that included the walk off home run in a game. The previous player to do it was Manny Machado against the Angels on Aug. 18, 2017.

Rosario is batting .378 with 10 home runs and 28 RBIs in 31 games since May 1. Maybe he should have his family watching him all the time. He could set some records.

Michael Wacha nearly made history on Sunday afternoon, taking a no-hitter into the ninth inning against the Pirates. Unfortunately, pinch hitter Colin Moran had other ideas. It was on Wacha’s 111th pitch that Moran got his single, an 0-2 changeup right down the middle that was smacked into right field.

The Cardinals won the game easily, 5-0, thanks to Wacha’s performance and that of Marcell Ozuna, who hit a grand slam in the first inning off starter, Nick Kingham.

The Mariners, behind a strong performance from King Felix finished off the Rays, for a three-game sweep. Hernandez pitched eight strong innings, gave up one run on five hits with a walk and seven strikeouts.

The Rays got a strong performance from their starter as well. Blake Snell, who is a Seattle native and who was making his first-ever start in Safeco Field pitched six scoreless innings. He gave up two hits, struck out 12 Mariners and didn’t walk anyone. Snell began the game with seven strikeouts in a row. His streak ended when Denard Span grounded out in the third inning but Snell came right back and got Mike Zunino swinging to end the inning.

The Mariners rallied off reliever Jose Alvarado, tying the game thanks to a Span single to score Andrew Romine and taking the lead off a Dee Gordon bloop single that scored Guillermo Heredia from third to give them a 2-1 lead. Seattle is now all alone atop the American League West standings, one game ahead of Houston.

Speaking of Houston, the best thing that happened on Sunday night was Alex Rodriguez leaving the ESPN broadcast booth to play catch, have a catch or however the hell you refer to it, with J.D. Davis. It took a few moments for A-Rod to get Davis’s attention but once he did, they threw the ball back and forth a few times.

Another incredible sight in Houston? J-Lo sitting near A-Rod as he worked the game. She was eating ice cream and seemed to be enjoying herself.

hi there just interrupting your NBA Finals viewing to share this photo of Jennifer Lopez eating ice cream and sitting basically next to ARod while he works the Sunday Night Baseball broadcast pic.twitter.com/vn6V0cZQZq

As for the game, Boston beat up on Charlie Morton and won the game 9-3. Thanks to all of the Yankees’ rainouts, the Sox have played six more games than New York but since the Yankees have a better winning percentage, they’re listed first in the standings even though they’re a game behind.

It was also a weekend of firsts. For instance, Dereck Rodriguez, son of Hall of Famer Pudge Rodriguez won his first game for the Giants.

Rodriguez pitched six innings of one run ball. The one run was a solo shot by none other than Jake Arrieta. Rodriguez also struck out six and walked two.

The Giants offense, led by top three batters in the lineup, Joe Panik, Buster Posey and Andrew McCutchen who had one, two and three RBI respectively, won the game easily, 6-1. 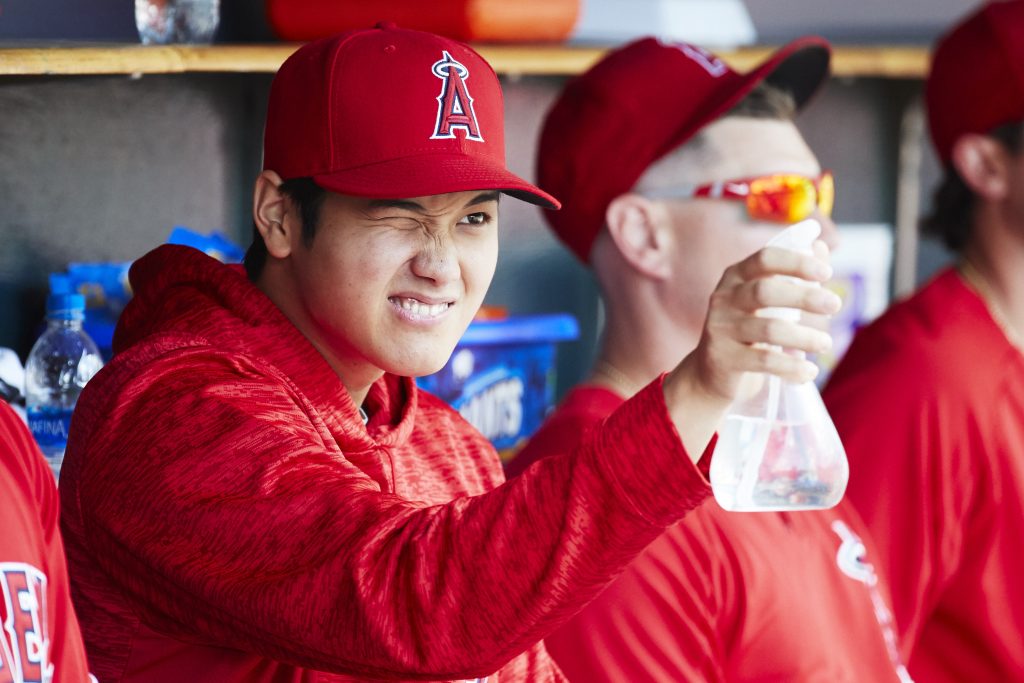 Othani didn’t pitch because the Angels messed with his schedule last weekend and decided to skip him so he wouldn’t pitch against the Yankees. That means for this installment of Sundays with Shohei we will be talking about his batting performances and my little feature may have to end now that he’s not pitching on Sundays anymore.

Thanks a lot, Mike Scioscia.

Defensive play of the Weekend

My new favorite player, Johnny Field of the Rays, made a nice catch in centerfield at Safeco Field. Naturally.

I still giggle when I see his name because I can’t believe it’s real.

The MLB draft starts Monday which would explain the lean schedule of only five games. And it’s five games instead of four because the Yankees, who have been rained out about 500 times so far this season, will be in Detroit for a doubleheader. Luis Severino is pitching the first game against Drew VerHagen while Domingo German will be toeing the rubber in the nightcap against Mike Fiers. (1:10 p.m. ET and 7:10 p.m. ET)

The rest of the games on Monday are on the West Coast. The Diamondbacks are in San Francisco, the Royals are in Anaheim and the Braves are visiting San Diego, all in the 10 p.m. ET hour.