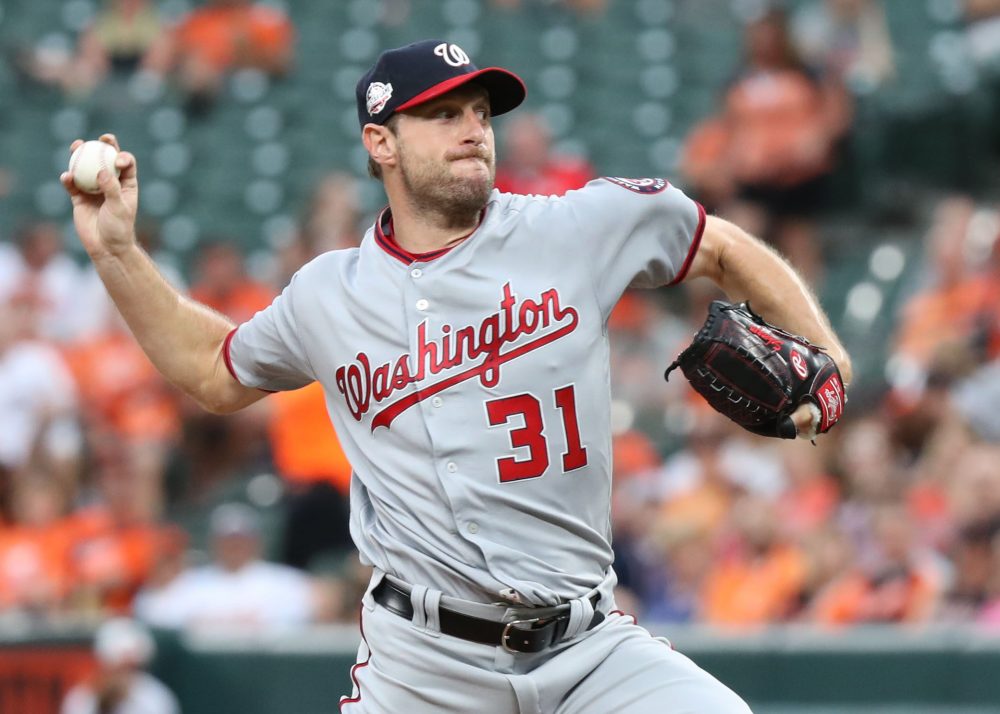 Coming into yesterday’s action, the Baltimore Orioles were projected by PECOTA to finish with the worst record in all of baseball: 64-98. Their odds of making the playoffs are put at a brutally honest 0.0 percent. Chris Davis has been unspeakably terrible, Anthony Santander doesn’t look the part of a big leaguer, all three players to log significant time at catcher have been sub-replacement-level, and Dylan Bundy took seven runs to the chin without recording a single out. The Orioles might not quite get to the 100-loss milestone, but nobody is confusing 2018 with it being their year.

Max Scherzer, on the other hand, has been one of just three pitchers to be worth more than three wins above replacement level at this point in the season. At age 33, Scherzer has yet to take a step back from his dominant form, and he had extra motivation Wednesday night. A win over the largely flightless Orioles would mean the Washington ace had won 150 games in his career.

The game was scoreless in the top of the third, when Bryce Harper came to the plate against Baltimore starter David Hess. Harper’s opposite-field dong, his (tied for the) MLB-leading 18th on the year, staked Scherzer to a one-run lead. That was ultimately all the ace right-hander needed. He completed eight innings of scoreless work, surrendering just two hits and striking out twelve to lock down career win number 150.

An insurance run which was scored on a Juan Soto single in the seventh pushed the lead to 2-0, and that’s where it sat when the Orioles threatened in the top of the ninth. Craig Gentry pinch-hit for Jace Peterson to lead off the inning, and singled. The next batter, Adam Jones, singled as well—bringing up franchise cornerstone and hot trade bait Manny Machado.

One strike deep into Machado’s count, Gentry TOOTBLAN’d himself out of the inning and shot the rally dead in its tracks. A flyout and a popout were then enough to close down the game, earning a save for Sean Doolittle. In addition to being career win number 150 for Scherzer, the game was also season win number nine—tops in the big leagues. For the Nationals as a franchise, the win restored them to an even .500 since moving to Washington in 2005. The last time the Nats hit the .500 cumulative mark? April 5, 2006.

The Angels and Tigers were slowed by one rain delay, and once more by goose delay. Yes, you read that right—goose delay:

THE GOOSE IS LOOSE 😂

While the Orioles are the current favorites to finish 2018 with the worst record in baseball, the Tigers have been tremendous slouches. They’ve likewise got a 0.0% shot at the playoffs, and that goose is starting to look like a mascot for the season, if not a terrible omen of even worse things to come.

To those wondering, the goose is allegedly okay. No word yet on whether or not the Tigers plan to add him to their 40-man roster, though.

As they took the goose away, it appeared to be alive. No further update available. https://t.co/Anann8Bepw

Harper’s total of 18 home runs is tied for the MLB lead. JD Martinez is doing his part and then some to ensure that the race retains some drama—he’s tied with Harper:

Jon Lester (sort of) threw a baseball to one of the bases to (definitely) record an out. Context be damned, that’s always a highlight. Yes, he two-hopped the throw. Details, details.

On August 10, 2016 Nathan Eovaldi started for the Yankees in Boston. He left after an inning due to an injury which turned into Tommy John surgery and took a season and a half of Eovaldi’s career. Wednesday night he returned to action and looked better than he ever has:

Eovaldi no-hit the A’s over six innings, issuing just one walk and earning the win as his team cruised to a 6-0 win. One start is not a significant sample size, but the Rays are desperate for starting pitching and Eovaldi will be given every opportunity to help.

This week’s Cubs/Pirates series has already earned notoriety for the Anthony Rizzo slide—but Wednesday night, the teams saw another controversial slide turn into a spectacle. Pitcher Joe Musgrove led off the bottom of the third with a single, and Josh Harrison grounded to third. Musgrove—who, as a pitcher, presumably practices sliding approximately once every three years—slid into second baseman Javy Baez. As Musgrove retreated, Baez had some words for Musgrove. Then, almost instantly, both benches were cleared:

Andrelton Simmons played his first full season at the MLB level in 2013, and I have followed his GIFable defensive antics ever since then. Simmons just does everything well. He’s got great reactions, a cannon for a throwing arm, an instinct for the play, and the ability to cover ground quickly. That last bit was on display here, as Simmons robs Victor Martinez from a single:

This week’s Thursday slate includes two day games and nine more night matchups. The Angels are in Detroit at 1:10 p.m. ET, the Rays are in Oakland at 3:35. Clayton Kershaw will aim to pick up his second win of the season as the Dodgers take on the Phillies. He’ll be opposed by Aaron Nola. Sonny Gray and Jose Quintana, the two jewels of the 2017 Trade Deadline, will both be active for their respective teams Thursday night. Gray and the Yankees are in Baltimore facing Andrew Cashner and the Orioles, Quintana and the Cubs travel to New York to face Seth Lugo and the Mets.

You need to be logged in to comment. Login or Subscribe
Llarry
I was at yesterday's D'Backs-Reds game. In the on-deck circle, in the first inning, Joey Votto was not taking full warm-up cuts, but rather elbows-in check swings, a lot like cricket batting. In the seventh, he came up against a shift and punched one out into left for a single. I'd love to see video, because I'd swear he used that cricket swing to do it.
Reply to Llarry