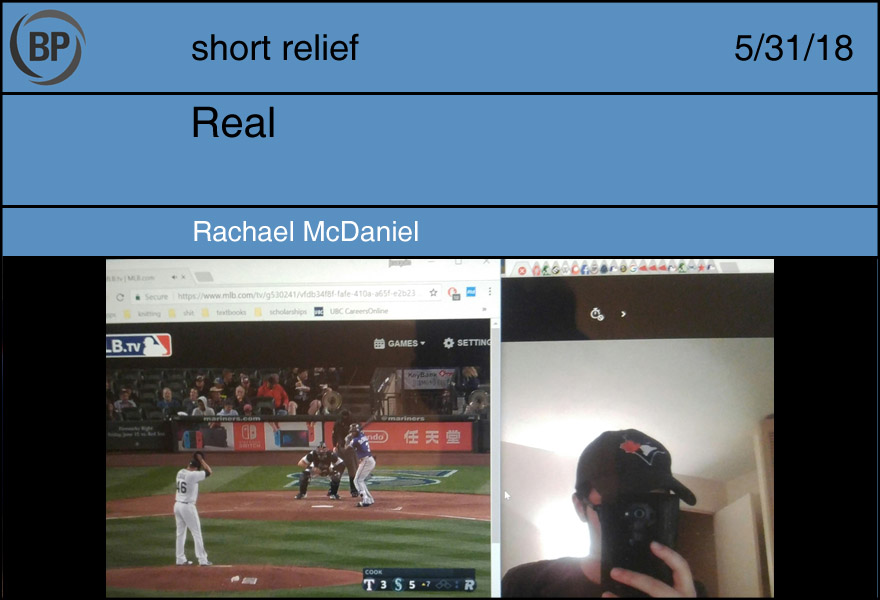 I am trying to go to more than one major league baseball game this summer. It’s the first time in my life that I’ve had the financial means and the time available to do so, and I have to go now, because who knows what might happen in the future? Things have changed so much for me in the past year, I can’t even bother imagining how different they might be a year from now.

So I’ve been looking at plane and bus tickets, scanning Stubhub for deals on seats. The dates I have marked keep getting closer. I haven’t bought any tickets yet. I keep staring at seat review sites, at people’s photos of the view from their seats, this one three stars, this one five. They look pretty much the same to me: small, pixelated arrangements of green and dust on my screen. I don’t know what they could tell me that I don’t already know.

I’ve never left North America. I’ve spent a total of about two weeks of my life in any place that wasn’t within a four-hour drive of Vancouver. Those combined two weeks were so long ago that they seem to have happened to a person so far removed and discontinuous from me as I am now. I forget that I’ve done anything. There are images in my memory of those other places, all flat and isolated, faded out at the corners — vaguely familiar pictures from some not-so-close relative’s photo album. They don’t seem good for anything; they don’t seem worth keeping. And even if they were, it’s too late now.

I hit confirm on my plane tickets — a round trip to the other side of the continent, only two weeks from now. I am travelling alone for the first time. I am an adult. I am doing this because I want to watch baseball.

I worry often that the way I engage with everything I enjoy is too immature. The way I engage with baseball, specifically, too much like the way a kid would. Like I’m exposing myself somehow, being too sincere. I’ve never played the game. I’ve barely even seen the game. Instead I have soaked it in by proxy, in rectangles on screens and in voices over radio waves. There’s always some medium standing in between. I catch myself getting emotional and I feel a little absurd. This isn’t real, I can tell myself; this isn’t really real.

I spent the weekend watching my younger brother’s baseball tournament. It was in a park in a part of the city I’d never really been to before. I took a bus, then rode the skytrain, then took another, unfamiliar bus. There were four diamonds at the park, and there were games happening on all of them, surprisingly tall 11-year-olds in bright colors everywhere. I stood leaning my crossed arms against the fence in the right-field corner; it was bright but cold, and I’d underdressed. A dog barked somewhere behind me, and an ant tried to bury itself in my ball of yarn.

My brother looped a double over the right fielder’s head, driving in a pair of runs. The kids in the dugout cheered and whooped ridiculously, and I laughed, and I caught myself laughing. This is real, I thought. I buried my hands in my pockets; they were freezing, and there were still four more innings to go. 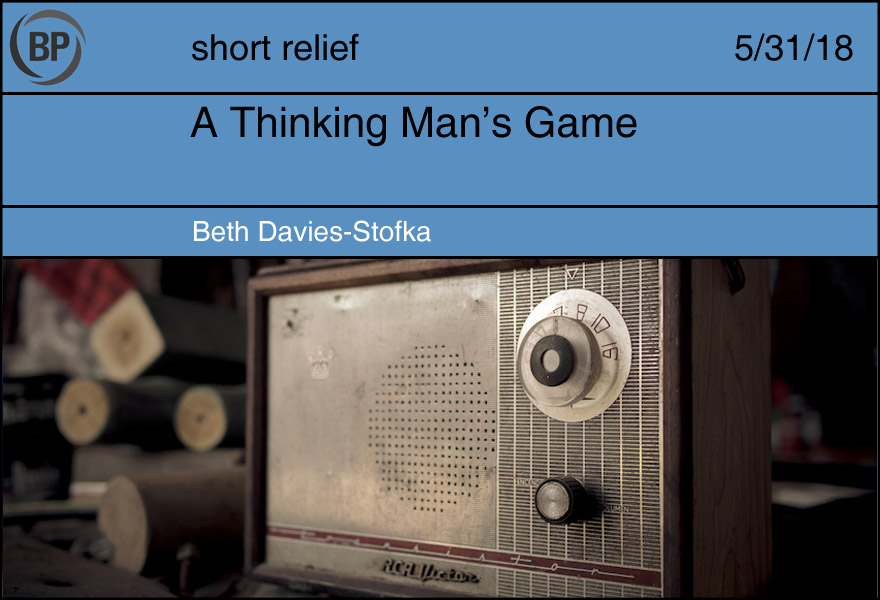 The Flushing Hens, proudly named after the livelihood of the team and the majority of its fans, walked off the Whitestone Warriors tonight when Olaf Olafson, in his third season as a Hen, hit a homer onto Northern Boulevard in the bottom of the 10th. The young farmer gave the Hens their first victory over the Warriors in nearly three decades. Olafson’s homer came off the Whitestone closer known only as “Buzz,” who had not given up a home run all season. Legendary sports reporter Joe Sassafras got the post-game interview.

Sassafras: Olaf, that was the first home run of the season off of Buzz. What was your thought process during that at-bat?

Olafson: I was thinking that I need to help my dad rebuild the hen house.

Sassafras: Buzz, you made a risky move with that slow curve when the count was 1-2. If you could have that pitch back, would you throw something different?

Buzz: Stoic philosopher Seneca pointed out that we waste too much of life. Life is a gift. There’s no point in regretting any part of it, because it will end. We should enjoy it while we can and be grateful for all we have.

Sassafras: Olaf, guys all around the game are talking about your plate discipline. What’s your routine as you prepare for games?

Olafson: Those eggs cartons aren’t going to fill themselves.

Sassafras: Buzz, what was your approach tonight as you came in to close the game?

Buzz: Closing games is a way of life. I approach each game in a state of profound anxiety because, as Kierkegaard said, “the more profoundly he is in anxiety, the greater is the man”.

Sassafras: Olaf, we noticed you went around the bases with a slight limp. Are you going to see the trainer once you get to the clubhouse?

Olafson: No, I’m okay. The wife and I have a colicky baby and we take turns walking around with him at night. I stubbed my toe on the armchair.

Sassafras: Buzz, the Hens haven’t beat the Warriors in almost thirty years, and you haven’t given up a home run all season, until tonight. How does it feel to see two streaks end with one pitch?

Buzz: If you apply the Harman-Vogel paradox, you will see that the game itself, and especially the outcome of each game, is a kind of lottery. Take the proposition, “We will not lose,” or, “I will get the save.” It is equally true that “Another team will not lose,” or, “Another closer will get the save.” But we can also be equally certain that some team, somewhere, will lose, or some closer, somewhere, will not get the save. Tonight, that team was us, and that closer was me.

Sassafras: And there you have it, listeners. Maybe. For now, good night from Flushing. 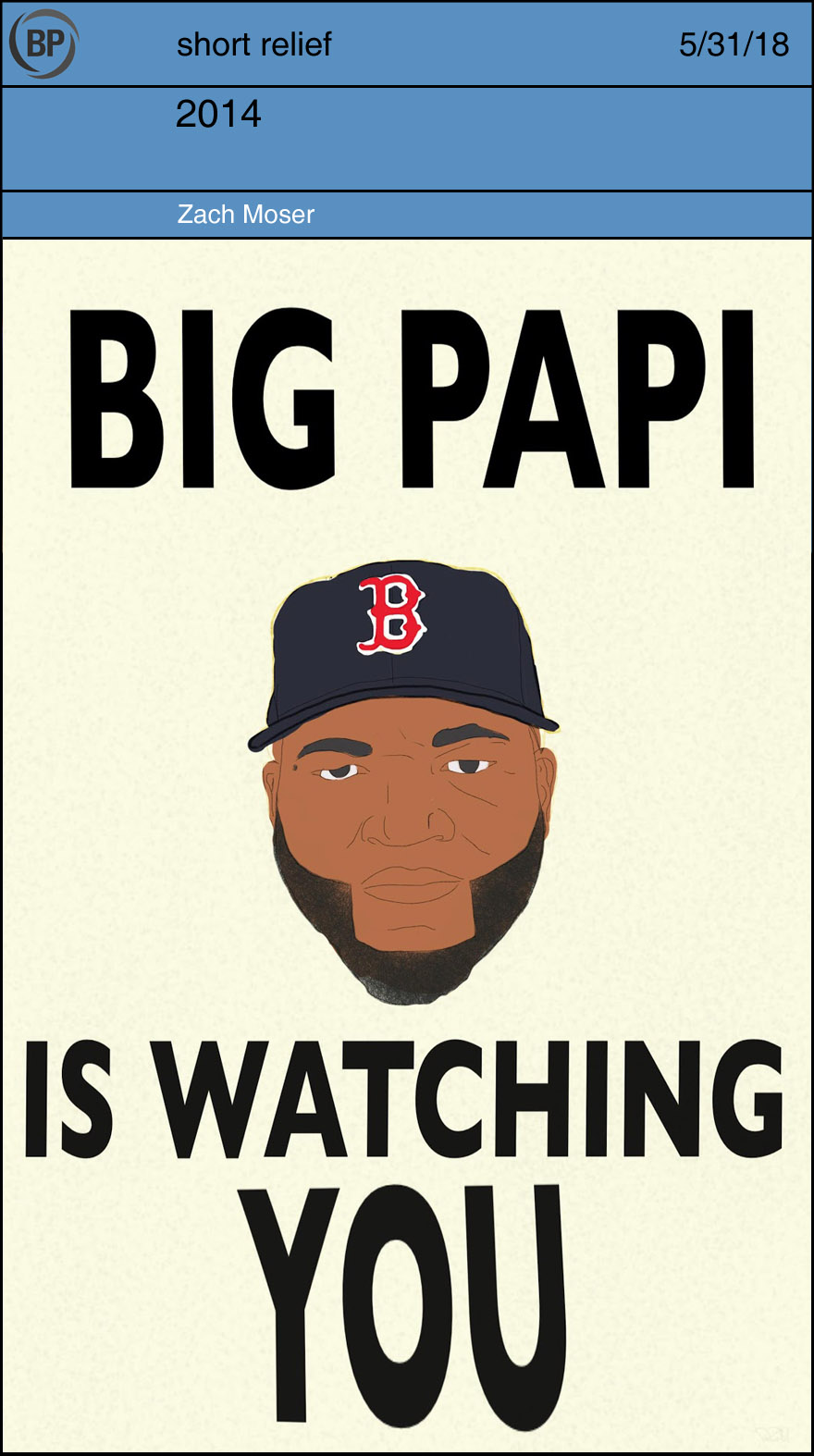 It was a bright, cold day in April, and the clocks were striking 7:10. John, his windswept beard a pendant commemorating his participation in a Boston music scene long since dead, sprinted across the Common, dodging carts hawking pretzels and funnel cake and holographic souvenirs depicting historic landmarks. Pursuing him were three men dressed in all black, save for the navy cap on each one’s head emblazoned with a red “B.” John widened the gap between himself and his pursuers, pushing through a crowd of tourists and ducking into the Arlington Street subway.

Exhaling for just a moment, John sunk into a seat on a train bound west. He needed to get out of the city as quickly as possible, hadn’t even had time to grab his possessions from the studio apartment he rented in the dilapidated Seaport. For years, John had resisted the increasing intensity of the Boston-New York rivalry; he was disgusted with the long commercial breaks, the interminable games, the innumerable pitching changes.

Across from his seat on the half-empty train was an enormous poster depicting a face at least a meter wide: the same navy cap atop the head, a pair of reflective sunglasses and a large smile completing the terrible visage.

The text below the head read “PAPI,” and John did his best to expel that word from his mind as he began to take stock of his fellow passengers. Although only a dozen or so others littered the train car, every person wore the same near-black blue, littered with that red logo. John began to feel his heartbeat in his hears, his palms growing damp as he waited for the train to reach the city outskirts, where he would catch another train bound further west.

He knew he wouldn’t reach that train, however, because as the other passengers exited at Kenmore, they revealed a man dressed in neck-to-toe black, topped with the cruel navy cap, seated at the far end of the train. John froze. The man stood, approached John with a purposeful stride, and sat beside him.

When John woke, he was in a large, green room, fluorescently lit, seated across from the three men who had chased him through the park. Shaking off the grog, John noticed he had a gash on his forehead. The wound pulsed with pain as the three agents questioned him.

“We’re agents of the Ministry of East Coast Bias.”

“Do you know this man?” One of the agents held up a photograph of a thick-necked figure, and John exhaled deeply through his nostrils. “Do you know Mike Trout? We know you have connections with his cell of rebels. We know you have been fighting with him and others for years against REDSOC. We found these when we searched your apartment.” One of the agents tossed a smattering of files on the table.

Three weeks later, John sat in a slightly-too-small faux-wooden seat at the 200-year-old ballpark. He watched REDSOC do battle with New York. They had always been at war with the Yankees. John let the crowd’s cheers and sighs wash over him, as Clone Pedro Martinez squared off against recently signed New York starter Bartolo Colón.