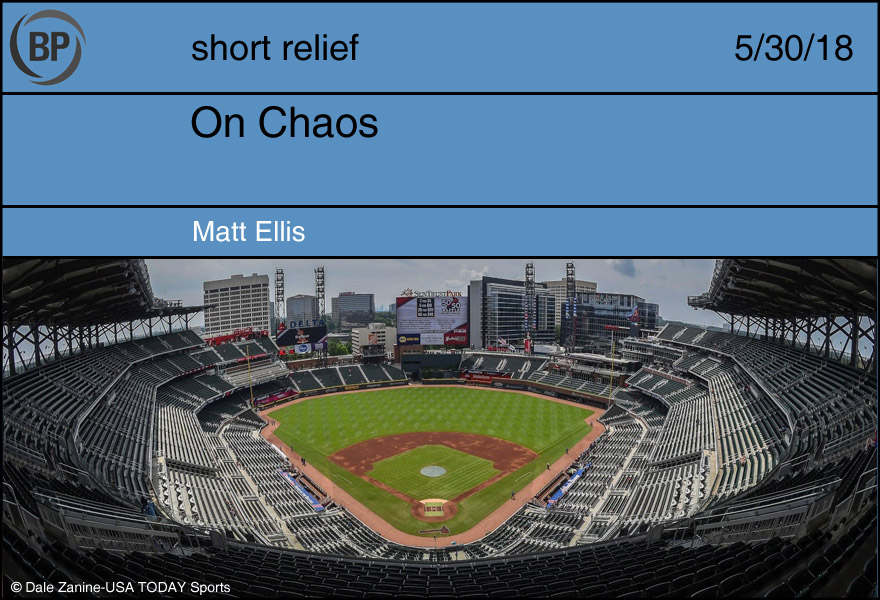 Chaos is not anarchy. In the latter, one might imagine the chaotic bellowing from the throat of a toddler, drowning in small plastic toys and dirt stains left on the kitchen linoleum. Or perhaps the twisted metal resting peacefully on the side of a highway onramp, attesting in its relative state of calm to that which came before. But the former is, fundamentally, a concept about temporality: a moratorium on predictability, an irruption into order. Chaos tells us not what will happen, but instead that the complex system in which we find ourselves is always already in a state of becoming and undoing. 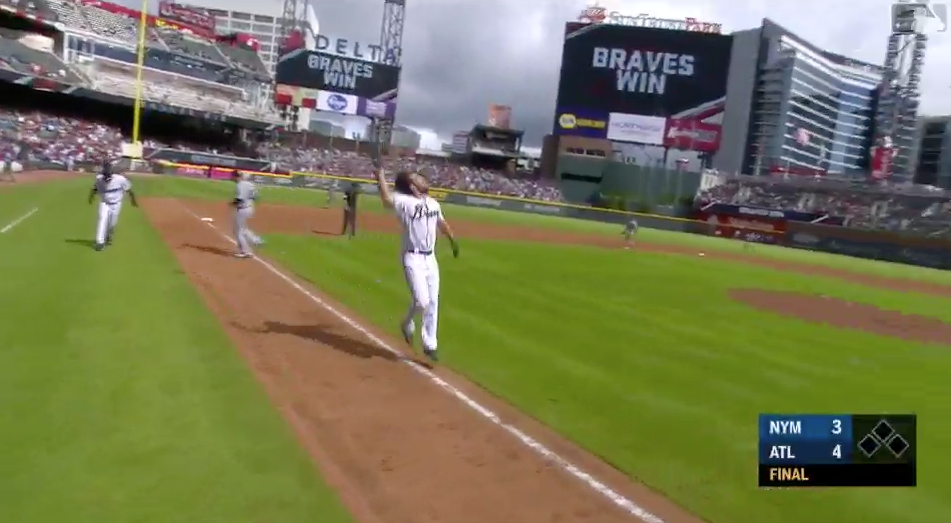 At the core of the concept are stakes which should fundamentally shake us to our core. Chaos tells us that the future is, despite everything we’ve thought since the Greeks, utterly decoupled from what we think are important causal events collected in the past. It tells us that when we narrate a series of historical events to produce a complex system–physics, BABIP, liberal democracy–we are actually doing just that: producing a narrative that convinces us we are in control when we are, in fact, not. It’s the stepping-on-the-prehistoric-butterfly from Ray Bradbury’s A Sound of Thunder, which radically disrupts everything which came after, for all of time. It tells us everything is incomplete, that “it” never will complete, that we are marooned in an ocean of maybe. 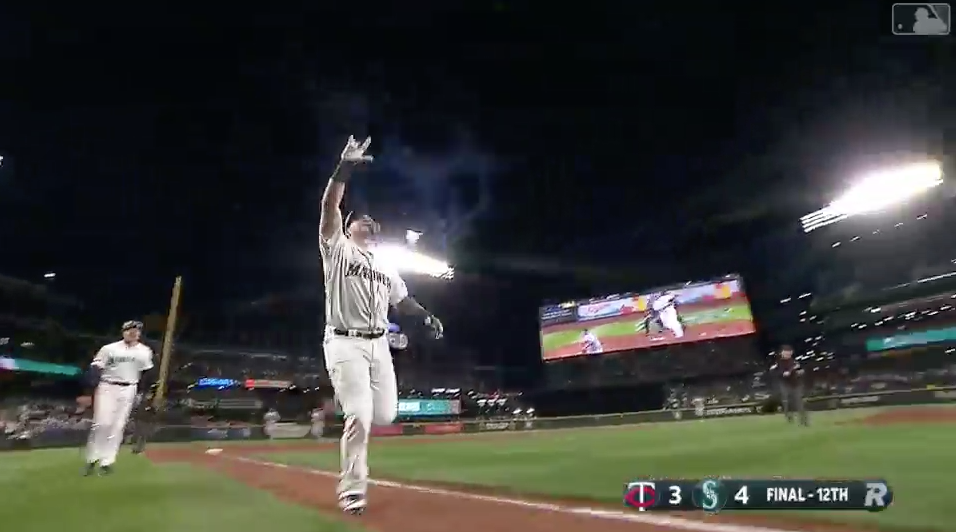 The problem with this, of course, is that it assumes there is an ‘out there’–of like, nature, or Science or something like that–and an ‘us’ over here, wholly subordinated to it. I much prefer the messianic time of Walter Benjamin, that idea that our current state of eternal becoming need not lead us to chaos, but rather to a redemption of yesterday’s tomorrow. This is the emancipatory approach, one which at once both sees the wreckage of history piling up in the rearview mirror while at the same time always hoping for what could be.

Of course, the problem with all this is that unlike these above non-linear concepts of temporality, we know precisely who the Atlanta Braves and Seattle Mariners will be playing baseball against through to the end of September. And so, as always, we find ourselves in a rut: every moment of potentiality is already delimited by a limited path which has been set out before the first pitch is ever thrown. Bring me chaos, or don’t. I’m not sure I’m ready for what that actually means. 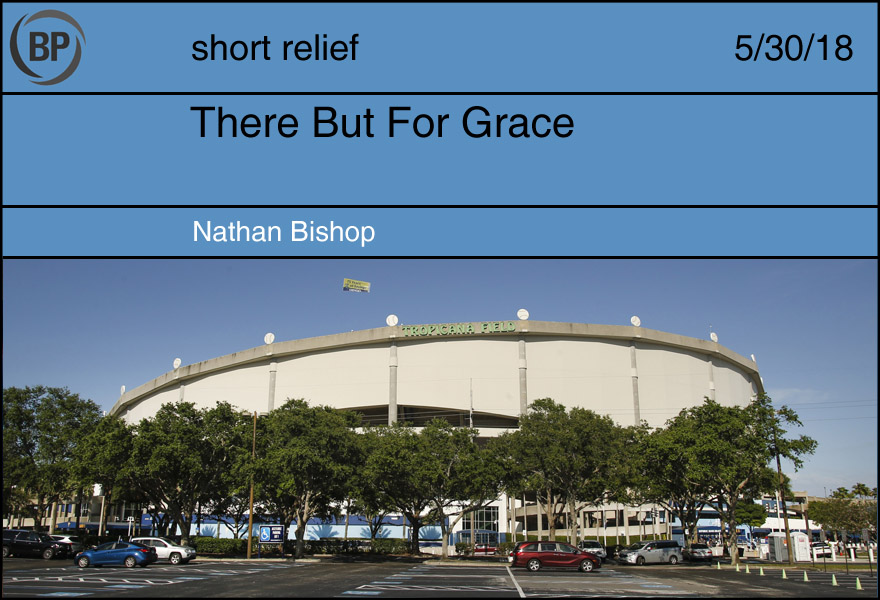 I want you to do something for me for a moment. I want to you to try to imagine an eight-year-old child, walking the very first steps across the bridge that spans youthful naivety and emotionally calloused adulthood. This child, let’s call her Grace, lives in a suburb of Tampa Bay called Bloomingdale. The average home price ($314,000) is about eight times the average income ($38,000). For Grace, it’s very likely her family has either made a choice between pinching pennies or hours, and whatever choice they’ve made will be accompanied by its own special regrets.

Grace, bless her earnest soul, loves baseball, and loves the Rays. This spring her parents took a weekend and spent it down with relatives in Port Charlotte, and at Grace’s insistence they spent a day at Rays Spring Training. Mallex Smith signed a hat and posed for a picture with Grace and, while the Tampa roster underwent its annual, algorithmically-necessitated purge, he’s still here.

It takes about 45-75 minutes to drive from Bloomingdale to Tropicana Field, depending on traffic and the driver’s acknowledgement of law. There are toll roads, bridges, rush hours, work schedules, after-school plays, and a variety of other reasons to just stay home. The stadium is, it is all but universally held, not fit for major league baseball. The team long ago ceased to compete in the traditional sense for playoff appearances and championships. The Rays, like many teams these days, have figured out that between revenue sharing, massive TV deals, and the rising profits of MLB’s online presence, they can exist perpetually and simultaneously in baseball’s financial cellar, it’s competitive middle-class, and the profit penthouse. They are one of the poster children for a deeply cynical, almost-certainly damaging new age of efficiency; Moneyball taken to its most logical conclusion in a capitalist society. They are, to be blunt, Bad.

But, again, Grace loves the Rays, and loves baseball.

So, they go to Tropicana Field. Not very often; maybe three times a season. So far this year they’ve gone twice. Grace has worn her Mallex Smith shirt both times. The first time she saw him on the field she sprinted down from their seat in row twenty-something to the edge of the field, and shouted and waved at him, as though seeing a dear friend. While the cavernous nature of a three-quarters-empty dome makes for depressing television and gate receipts, it does wonders for acoustics. After a few seconds, between batters, Mallex turned, smiled, and waved. He had no memory of Grace, of course, but you tell her that.

The Rays lost, 5-2 to Atlanta, in front of 12,082 people. Grace announced on the way home it was the best day ever. Her parents smiled, yawned, and sighed. It was Wednesday night, late, and brake lights lit their path home. They both had to work in the morning.

You need to be logged in to comment. Login or Subscribe
John Collins
Grace's experience is not unlike mine as an adolescent Twins fan in the late 70s. Nice piece.
Reply to John