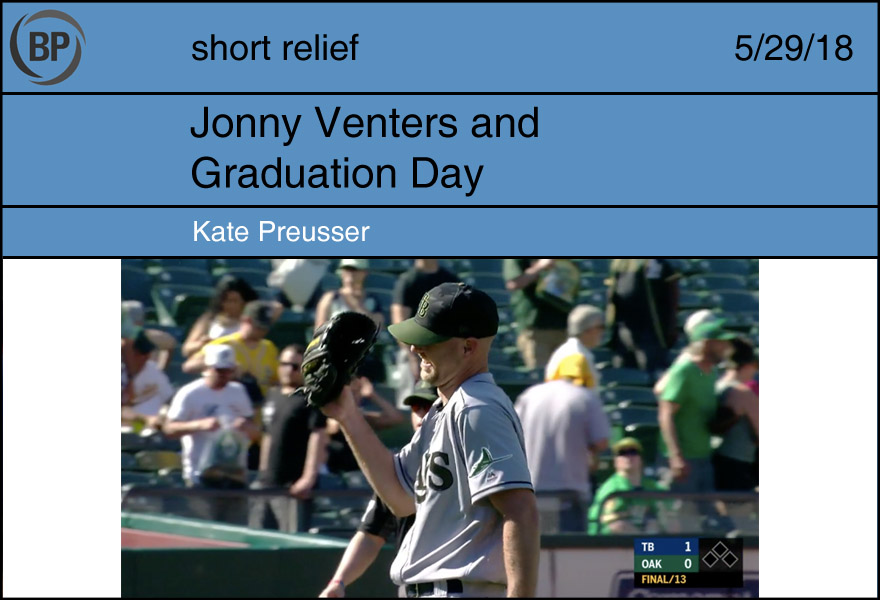 Nothing marks time quite so clearly as being in elementary school. A flotilla of cereal-box ships for Columbus Day, Tootsie Roll pop ghosts for Halloween, turkey hands for Thanksgiving. Pieces of copy paper folded and snipped into snowflakes, then taped to windows to shiver over heating vents, to mark the long winter months, and wads of colored tissue paper glued soupily to construction-paper trees declare that spring is coming. (Is it really springtime without a clothespin butterfly?) The cycle repeats, again and again, until finally one graduates, and moves on to the adult-adjacent world of high school, where one has the opportunity to drop eggs off the school roof or tote around flour-sack babies.

The calendar’s predictable march for an elementary schooler is matched only by that of the professional baseball player, whose season begins right when those clothespin butterflies are being wearily pinned to a length of yarn strung across a classroom, a lesson in symmetry made manifest. There are no butterflies in Spring Training, but there are green hats for St. Patrick’s Day, an apocryphal holiday celebrated during an apocryphal part of the season. The beginning of the season proper brings Mother’s Day and an onslaught of pinks, in varying degrees of poisonousness, then Memorial Day with its solemn camouflage, Father’s Day blues, stars-and-stripes-dipped Fourth of July gear, and then more camouflage for Veteran’s Day. Sprinkled in there will be other special days, like Jackie Robinson Day, the one time a year players may wear the number 42, and Players Weekend, MLB’s rumspringa where they allow players to show a personality for three games of the 162-game schedule.

Players Weekend, while glorious, is also a little sad, because there are inevitably players who thought they would be able to celebrate with their own personalized jersey and gear, ordered well in advance, who instead find themselves without jobs, or banished to the minors. On the flip side, there are players called up before the deadline to submit special nickname jerseys, transfer students who missed out on the chance to make their own clothespin butterflies, but who proudly number themselves among their classmates anyway.

I don’t know if 33-year-old Jonny Venters, chosen in the 30th round of the 2003 draft, will still be with the Rays by the time Players Weekend rolls around this year, in mid-August (if it happens; there’s no official announcement from MLB as yet, as far as I can tell). But after earning his first save since 2011 the other day, the veteran of three (3) Tommy John surgeries deserves to have the back of his jersey say whatever he wants it to. For as much as baseball players exist on the same calendar-driven schedule as elementary students, hurt baseball players exist in an entirely different sphere, one where days blur together in a concertina of pain and boredom. For the past five years, Venters has been mired in a nightmare where elementary school goes on forever, never moving past turkey hands and clothespin butterflies, as his body failed him again and again. Finally, he is free.

If he’s still with the Rays in August, I hope the back of his jersey reads, simply, GRADUATE. 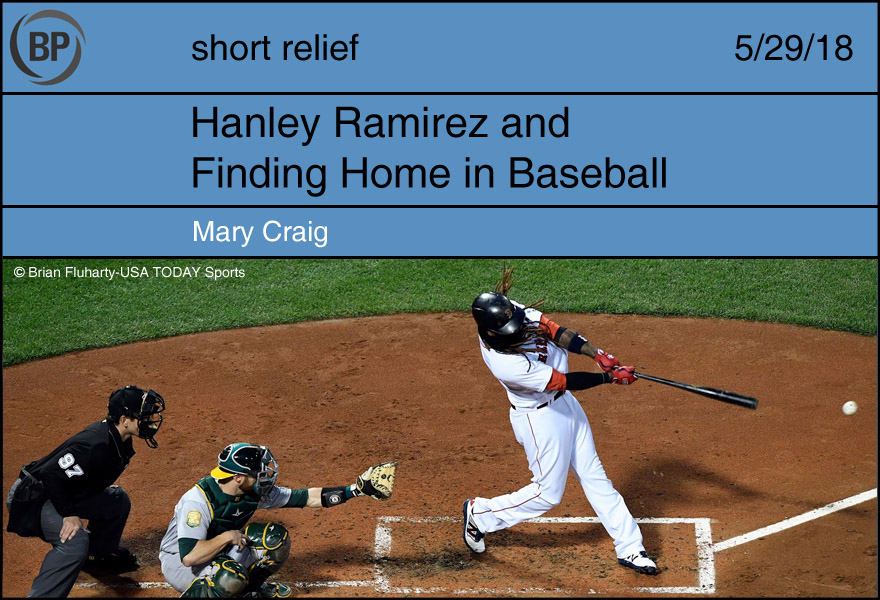 In baseball, “home” holds great significance. First, there is home plate, where the game begins and ends, where runners depart and return. It is the most fixed of the bases, buried into the dirt rather than sitting atop it, and it connects each base to the others. Indeed, it acts so much as a metaphorical and literal representation of “home” that it is shaped like a house.

Expanding outward, baseball’s connection to home rests on its evocation of comfort, safety, and belonging. Baseball ties itself to memories of warm summer nights and lazy afternoons, gathering with one’s friends and family to play the game wherever possible, in tiny dirt parks outside elementary schools or makeshift fields with spare gloves denoting the bases. It taps into the suburban American ideal that permeates society, existing everywhere as the great equalizing force that affords any two individuals the opportunity to forge a relationship.

Among its fans, baseball provides this sense of security, that regardless of how foreign one’s situation might be, if there exists baseball in it, everything will be okay. “Home” is looking through an airplane window and counting all the tiny baseball fields below you, finding reassurance in each one. It’s sitting through rain delays because even the warm, dry comfort of home is somehow lacking in comparison.

For these people, baseball’s connection to home is real and powerful. But this connection is also built on a version of America that for many does not exist. It rejects the urban baseball experience in favor of a veneration for pastoralism based on gentrification. It reduces the concept of home to the classic suburban dream of a white picket fence surrounding a detached house in the shape of home plate. For many, then, the task of finding home is exceedingly difficult.

When Hanley Ramirez signed with Boston prior to the 2015 season, it was treated as a homecoming––he was returning to the organization that gave him his start in professional baseball. Prior to being traded to the Marlins in 2005, Hanley played only two games with the Red Sox, going hitless in both. Throughout the years, and as Boston fielded a revolving door of disappointing shortstops, he was treated as a “what if.” Sure, Josh Beckett and Mike Lowell helped the team win the 2007 World Series, but what if the potential superstar shortstop was never traded? What if Boston was his home forever?

Twelve years since he was traded and three and a half since he signed for the second time with Boston, Hanley’s homecoming came to a disappointing end when he was DFA’d on Friday. What the ideal homecoming would have looked like––maybe more white picket fences and fewer lazy afternoons––or whether it could have existed at all are questions even the greatest of architects cannot answer. All we can hope for now is that Hanley eventually finds home.